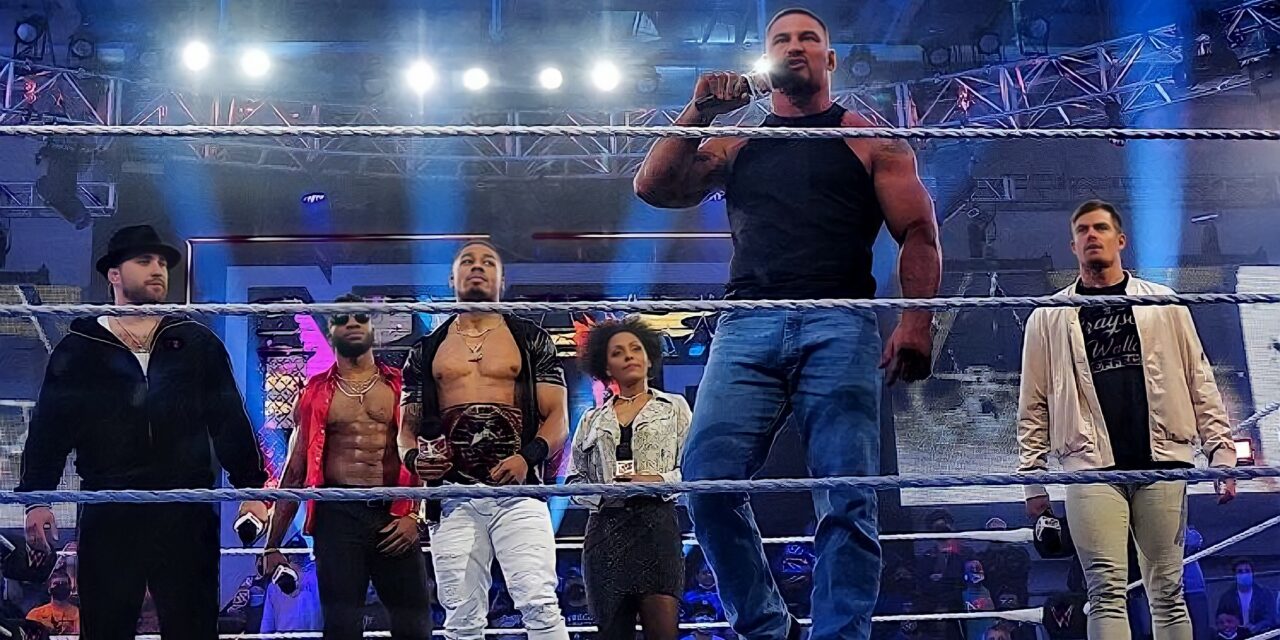 NXT’s repetitive night of déjà vu had not one, not three, but two WarGames advantage ladder matches in preparation for Sunday’s event. Granted, those bouts between Dakota Kai and Kay Lee Ray and Johnny Gargano and Bron Breakker were pretty solid. It’s really the monotonous layouts and segments (with oh so many interruptions) of NXT 2.0 programming that’s got me singing Olivia Rodrigo’s hit song “deja vu” heading into TakeOver.

The eight women involved in WarGames begin the episode with a disingenuous brawl before referees interfere. But the energy remains high for the annual WarGames ladder match, where the winner’s team receives numbers advantage. After fighting on the outside, Kai and Ray wrestle around an in-ring ladder heading into picture-in-picture. Kai hits a nasty double footstomp from the rungs, but Ray recuperates enough to trap her opponent and unlatch the briefcase. Big props considering the usual stipulation chaos; Ray and Kai kept things different here, centering the match around literally one in-ring ladder.

Grizzled Young Veterans are breaking into a locker as Ikemen Jiro and Kushida aloofly foil plans. Come to find out, it’s Josh Briggs’ and Brooks Jensen’s locker. Jiro and Kushida hit a one-liner to end a segment that served as… comedy relief maybe?

Grimes’ feud with Duke Hudson revolves around cutting the former’s hair — even though the new length looks fabulous. Chase, in his clown boots and sweater, takes control of Grimes until the comeback is initiated. The Cave In is delivered giving Grimes the victory, but Hudson interrupts from the podium. He presents a slideshow of Grimes with different haircuts — including the infamous “Karen”, but Hudson is taking everything off. In response, poor Chase is about to get sheared until a Chase University student saves him.

Team 2.0 is in-ring: Carmelo Hayes with Trick Williams, Grayson Waller, Bron Breakker and Tony D’Angelo. Hayes and Waller in particular are surprisingly outstanding promos, Breakker is a Steiner — speaks for itself, and D’Angelo is a hilarious caricature. Tonight’s men’s ladder match is between Breakker and Johnny Gargano, who comes out talking smack. He gets a “Big Bad Booty Nephew” chant before segment’s end.

MSK is driving towards the shaman, and they’ve finally arrived. “It’s him,” they say before the sitcom abruptly ends.

Smackdown megastar Wagner and partner O’Reilly just never meshed, did they? Assuming they win, they’ll face Imperium for the NXT Tag Team Championships at WarGames, but something says they aren’t sticking together for long. Xyon Quinn appears and stands there menacingly, continuing his beef with Elektra Lopez and Santos Escobar, before heading into commercial. Quinn conveniently waits for broadcast’s return to attack Escobar, although LDF’s Joaquin Wilde and Raul Mendoza keep control. Wilde wins a great striking exchange against O’Reilly, but the save and double-team finish by Wagner brings his team the victory.

The NXT Tag Team Champions Imperium respond backstage and are interrupted by O’Reilly and Wagner, who thinks that “dumbasses” is a hard-hitting line.

Daddy’s girl hasn’t been scrapped just yet. Tiffany Stratton talks about shopping and whatnot, which doesn’t quite relate to wrestling, but whatever.

Joe Gacy is in-ring, backed by Harland, saying that the Cruiserweight division isn’t inclusive and progressive enough. At “NXT Conflict Resolution” this Sunday, he vows to dethrone the current NXT Cruiserweight Champion Roderick Strong and change the division for the better. Three competitors are lined up for Gacy’s gauntlet; Joe Gacy pins the smaller-sized first opponent and begins his second intergender bout before Diamond Mine interrupts. “You done messed up now,” says mouthpiece Malcolm Bivens, but Gacy stands tall over Strong with a lariat.

Solo Sikoa is interviewed backstage about tonight’s opponent, and yet again, here’s another interruption. Boa is pleading in pain, presumably about Mei Ying’s spirit that has inhabited him.

The exact same camera angle used for Xyon Quinn’s interruption is used for Robert Stone’s. He’s scouting talent, since his prior business partners have been released of course. Meanwhile, Enofe gets a questionable amount of offense over Sikoa, but the latter’s Samoan Drop and top-rope splash earns him the victory. Here comes an entranced Boa to attack Sikoa, but Enofe helps fend the attack off.

Indi Hartwell gets a call from the hospital, saying that her husband Dexter Lumis is gone. Perhaps he checked into a local medical facility instead?

Xyon Quinn meets Elektra Lopez in the parking lot. “Good luck in your match next week against Santos. You’re gonna need it.”

Here’s yet another weekly vehicle to push Hartwell’s concern for Dexter Lumis and Pirotta’s growing anger. The match itself isn’t the focus, and subsequently, the audience is pretty mild. Luckily, Pirotta hits her finishing maneuver and makes it quick.

A vignette plays for Draco Anthony, and his “actions speak louder than your words,” he says while drinking coffee at an empty diner. No really, that was the vignette.

“We love Johnny” chants are directed towards the “heart and soul” of NXT. Even if he departs, NXT 2.0 is pretty lifeless anyways. Regardless, both competitors put forth great showings of respective speed and strength, and after picture-in-picture, the audience is on their feet. Gargano and Breakker, too, only use a singular ladder (maybe they forgot to buy more) and slam one another into the steel. Breakker eats three superkicks but recuperates to deliver a top-rope Frankensteiner and powerslam. Breakker climbs the ladder, unlatches the briefcase, and wins his team WarGames advantage for Sunday.

Despite a habitually low-point middle section, the opening and closing ladder matches were strong enough to make tonight’s episode pretty decent. Though, if Team Black-and-Gold win at WarGames, let’s hope it signals the return of the “1.0” format.