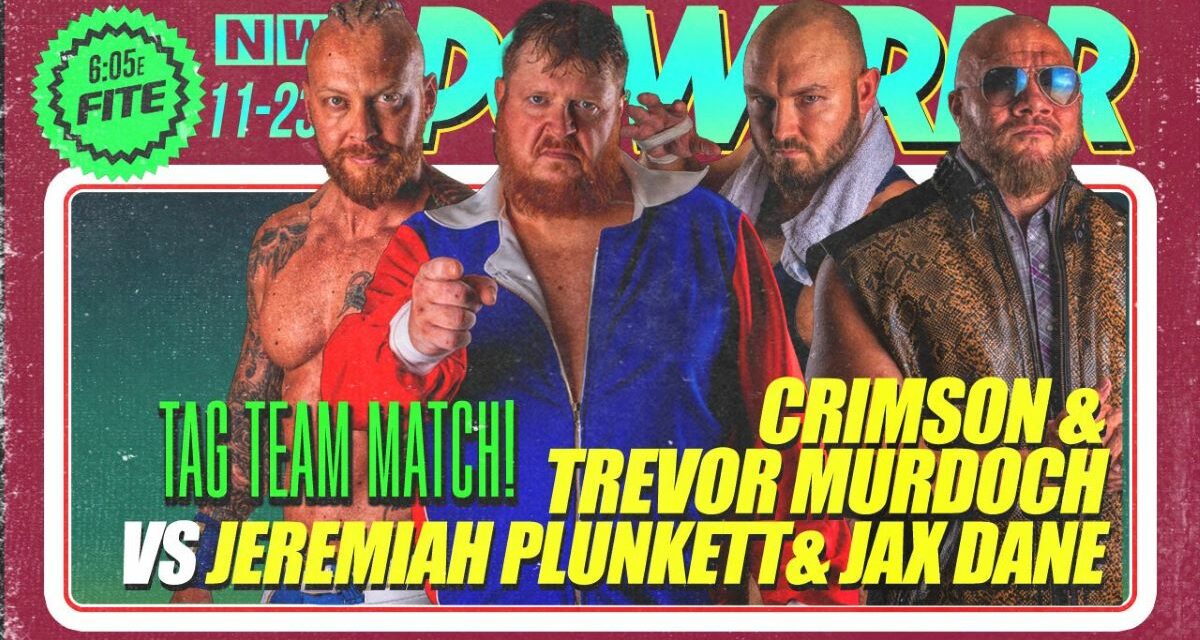 The NWA has had a great run at The Chase Plaza Park in St Louis, and it’s time for the National Wrestling Alliance to wrap up in St. Louis, MO.  Before everyone heads back to Atlanta, GA, there’s a few matches left before they gear up to the next pay-per-view, Hard Times 2.

As your commentators Joe Galli and Velvet Sky have the call, NWA Owner William Patrick Corgan has a front seat with the both of them to check out the action, and we get started with your First Match of the Night… 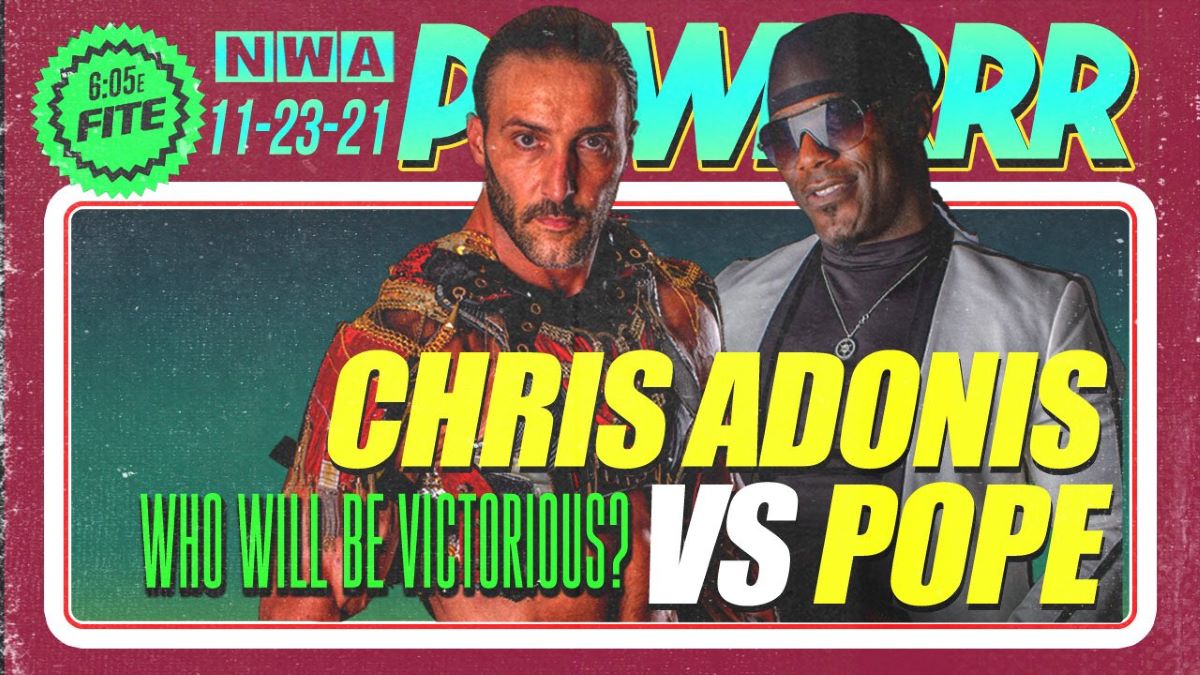 Kyle Davis notes this is a non title match, and before Pope steps in the ring, he makes a pit stop to Davis at The Podium, and acknowledges a call he received on  his phone a few weeks ago.  Because this other person has a vested interest in the match, Pope isstepping away so said individual can take his place.  Therefore, the next match is…

While Corgan doesn’t approve of how Aldis went about getting the match, he doesn’t disapprove of it either.  Aldis just takes Adonis to the proverbial woodshed, by hitting a Thesz press hammering away at The Masterpiece.  As Aldis ascends up top the turnbuckle, Latimer comes out to distract.  Aldis is still steamed at his former friend, and Adonis drop kicks Aldis to floor, and chops away from outside the ring.  Latimer looks on, smirking as Adonis cranks his neck, but Aldis creates separation with a belly to back suplex, and then a Michinoku Driver.  Aldis heads back up top with an elbow drop to cover for a two count.  Latimer jaw jacks at Aldis to continue the distraction for Adonis to get in a Masterlock, but he escapes the submission hold.  Adonis goes up top for a dropkick, but it’s reversed to the Kingslayer cloverleaf submission.  Aldis turns Adonis around while holding the submission to lock eyes with Latimer , until Adonis finally decides to tap out.

Aldis beckons Latimer to come in the ring.  Latimer is about to oblige, but Kamille comes out and talks him down.  Makes sense, since ya gotta save something for the PPV.

Corgan is with Kyle Davis at the Podium, and calls out Thom Latimer from the back. Latimer comes out and is still smirking, but Corgan is fed up with his behavior and tells him to get in the ring, or get fired. Latimer doesn’t care, and he’ll fight anyone.  So the sacrificial lamb for this bonus match is…

This is just a straight up squash mash to show Latimer can take on any challenge the boss man can dish out.  Since I do not recap squashes, enjoy this recipe for Butternut Squash Soup, which is good for your heart and in honor of “The Heartthrob.”

Meanwhile, this match showcased not only the complete douchenozzlery of Latimer, but his impressive power, as a leaping piledriver ends it for Roller, and Latimer pins with just one finger.

Fans chant “You Suck” at Latimer, and he relishes every minute of it.

May Valentine is with “Cyon” and the members of Idol-Mania. Tyrus asks if this is what he wants in facing him for his NWA Television title. “Cyon” apologies, and he is 100% Sorry.  No, wait; he is 110% sorry, then 116%.  Do I hear 125%, asks Tyrus?  Maybe… yes, “Cyon” is  130% sorry, and it’s sold American by Tyrus and the crew. Valentine thanks Jordan Clearwater for a percentage of her time squandered, and I can feel her exasperation.

Speaking of exasperating things, we got your… 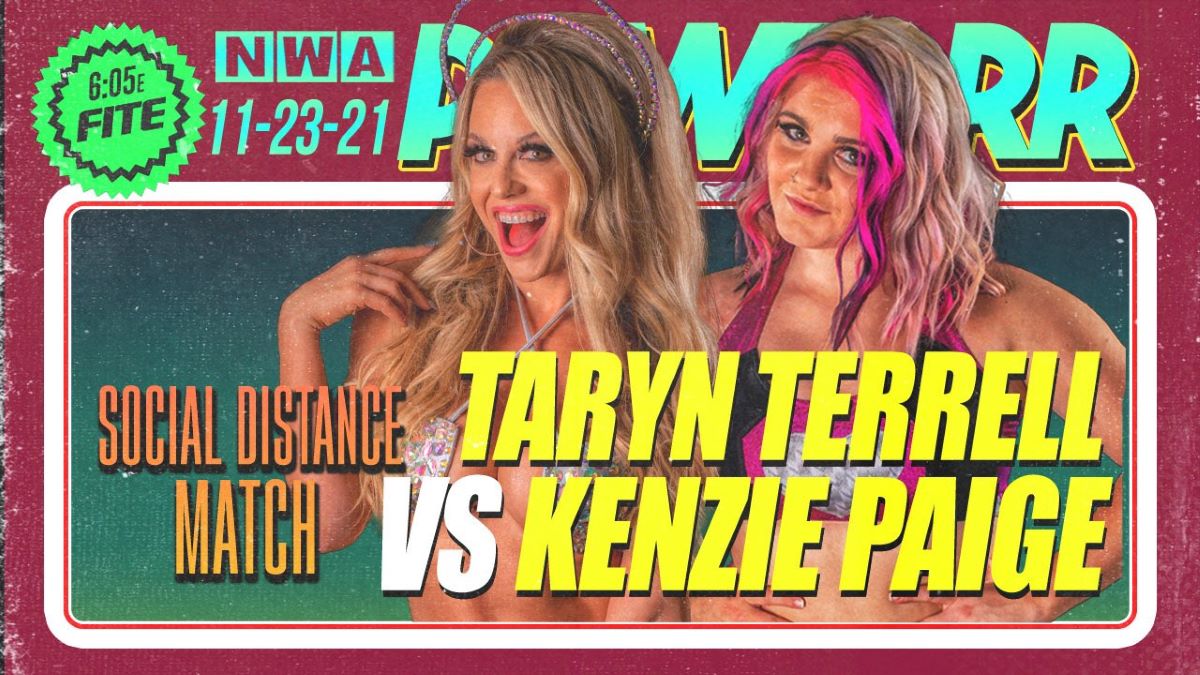 Terrell tries her hand at social commentary and to respect the mask mandate of St. Louis, she says this will be a Social Distancing match.  From there, Terrell takes her sweet time to get a mask for Paige, while she wears a glittery version.  While this is going on, I feel a nasty jangle for me to start an…

(Author’s Drunken Rant:  Somewhere, Jim Cornette is rolling in his grave, or calling someone a “Bumblef***” for booking this match.  I’d like to say this feels like the worst segment in the world for its execution and poor timing, if I didn’t already read about that egg segment on Monday Night RAW.

Oh, and please send thoughts and prayers to poor Dale Plummer for his ever-dwindling sanity after last night’s “wrestling” show.)

Terrell keeps up with her nonsense, and then sprays sanitizer in Paige’s face, and Paige is done with all of this.  Paige chases after Terrell, and she escapes to the Podium.  She gets the mic from Kyle Davis, and shrilly says Paige didn’t follow the rules, so she won’t enter back in the ring.  Fine by Paige, as she’ll accept the countout, and thus…

Your Losers:  Everyone watching that match

I can say, with authority, that was…yeah.

Now for something that resembles a wrestling match… 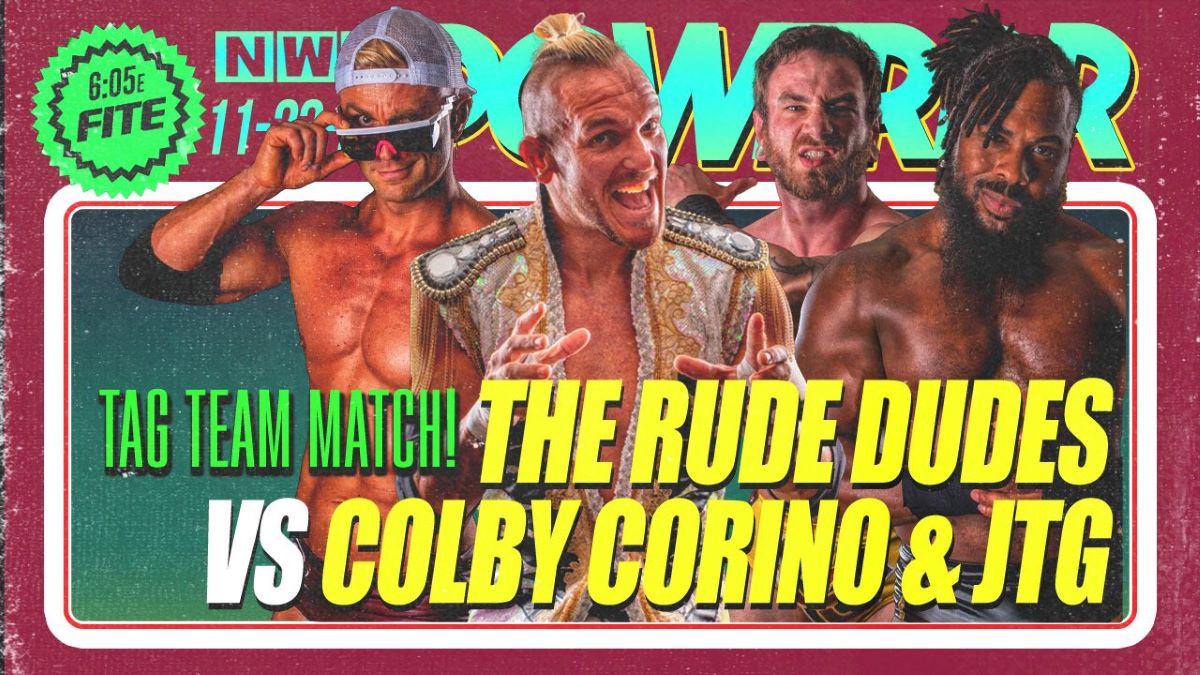 Last week was an odd pairing of Corino and JTG teaming up, and tonight they continue on that angle.  Rudo and JTG start out, but Tha Gawd is able to overpower El Rudo.  Rudo scrambles to his corner, and gets Stanley for the tag.  JTG is still able to easily overpower America’s Jawline to his corner, and Corino tags himself in, and JTG is perplexed by what happened.  Corino shows off with an Angle slam, and works down on Stanley, but Stanley is able to overcome Corino’s offense and get El Rudo in with some sweet double team action by the Dudes.  At one point, Stanley with the cocky one legged pin for a count of one.   Corino goes his corner for the hot tag to JTG, but…psyche! He pulls back, and thinks he can do it himself, but Rudo with a pop up powerbomb stops that notion, as he pins Corino for a two count.  The match starts to devolve, and a blind tag by JTG, and he is Tha Gwad en Fuego, working over The Rude Dudes.  Corino isolates El Rudo with a tope plancha to the outside, and JTG delivers the Brooklyn’s Edge to Stanley to get the win for the team.

Your Winners via Pinfall:  JTG and Colby Corino

Yeah, Cryme Tyme, this ain’t, but it has some possibilities down the road.

Kyle Davis with Jax Dane at The Podium, and he’s annoyed by Crimson. Everywhere he goes, he turns up like a bad penny.  He had a chance to cash in his title opportunity against Trevor Murdoch, but Crimson cost him that chance.  He’s also annoyed by the Corgan Conspiracy that’s preventing him from gaining the Ten Pounds of Gold he once held.  Davis gets word from his earpiece that he needs to wrestle now. Dane walks away and then goes to commentary and stares directly at the NWA owner, and Corgan says you need to start wrestling tonight.  That’s what leads to tonight’s Main Event…

Dane in still in his street clothes.  As the bell rings, Dane has Plunkett do all the work, and poor Plunkett is worked over by Crimson and Murdoch.  Murdoch adds the emphasis with a spinebuster and succession of body slams, chops, and a Russia leg sweep to cover for two.  As Murdooch pulls up Plunkett, he gets the champ with a throat chop, and Plunkett tags Dane in.  Dane takes advantage of the situation, and delivers headbutts to Murdoch’s collarbone in the corner.  Dane tags Plunkett for a double team, but Murdoch halts that, and Dane gets out of Dodge City for poor Plunkett to take the brunt.

Murdoch tags back to Crimson , but Plunkett gets a thumb to eye to create separation and punch out the big man to cover for a two count.  Crimson fights back, but Dane is on the outside and grabs his legs and crotches him on the ring post.  From there, the match devolves into chaos as Plunkett is knocked off the ring to the outside.  Dane takes over to put the hurting on his former War King partner, but Crimson manages to turn the tables and hits a second rope elbow drop for a two count.  Dane blind tags Plunkett, much to his chagrin, and Crimson chases after Dane to the back. Murdoch gets Plunkett with a flying bulldog for the three count.

Your Winners via Pinfall:  Trevor Murdoch and Crimson

Poor Plunkett gets the worst of it, as the shows goes to credits.

This final episode fell a bit flat in some parts.  Part of it was the execution of some of the matches, and the matches felt…off.  Not a good way to end this season of POWERRR before the upcoming pay-per-view.

The only reasons it wasn’t scored lower is because the Main Event had a good showing to send the fans happy.  Also, there was no mention of an egg anywhere on the show…so that helps.

Until then, we’ll see you at Hard Times 2, if not sooner!