RAW: WWE has egg on its face with a lackluster Monday Night show 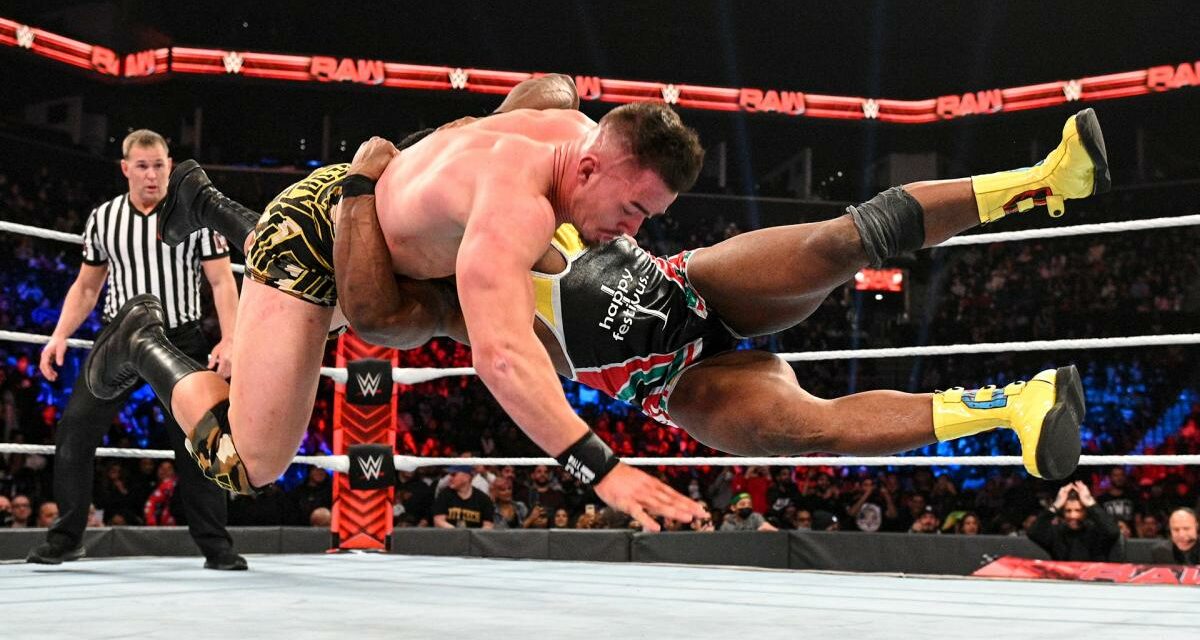 Mr. McMahon is missing his golden egg. Adam Pearce and Sonya Deville have been called into his office to find out who stole the $100 million Cleopatra Egg that The Rock gifted him. Wait, this happened during Survivor Series?!?

There are no leads on who stole the egg. Vince can’t believe someone stole from him. Sonya says a search turned up noting. Vince tells them that the egg better be returned or they won’t be returning to their jobs. This is dumb. Vince offers a WWE championship match to whoever has information about his egg.

Kevin Patrick wants to interview Riddle, but can’t find him. Orton knows it’s not like Riddle to miss a match. Riddle stops Orton in mid sentence as he is in his best Orton cosplay. Orton tells him that’s enough. He just wanted Riddle to be more like him, not actually become him.

Riddle continues to act like Orton with his in ring performance. He can’t hit the draping DDT, though, as Ziggler dumps him to the floor. Riddle kicks out of a famouser. Ziggler rips off the fake moustache and goatee on Riddle. Riddle blocks a super kick and hits a knee strike. Riddle slams the mat like Orton does before hitting Ziggler with an RKO. He covers and gets the pin.

After the bell, Orton cuts off Roode and hits him with the Bro-Derek. The two celebrate in the ring.

Backstage, super stars are tearing apart the back stage area looking for this stupid egg. R Truth found a football and the something more after running into the ladies restroom.

After defeating Charlotte Flair last night, Becky Lynch is ready to turn the page and move on to something fresh and new. Lynch lists all the women on RAW, asking the crowd who they want to see on top. Becky hates to break it to the Brooklyn crowd but Liv Morgan isn’t beating her. No one is taking her title.

Before the match, Bianca recaps her Survivor Series. She was the sole survivor on Team RAW, eliminating four women from Smackdown. She hopes Doudrop will find something better to do with her time. Like finding that stupid egg. Bianca stays on her personal hot streak, dominating Tamina. Belair hits the KOD and covers to get the pin.

Rollins brags about leading Team RAW to victory and being the sole survivor. He takes his teammates to task for their failures.

Rollins attacks Balor as he poses on the turnbuckle. Balor fights back, knocking Rollins out of the ring. Finn flies over the top rope, taking Seth out. Rollins then catches Balor on the outside, slamming him into the announce table and tossing him into the barrier. Rollins stomps Balor on the floor and grabs the ring steps. He smashes Balor in the face. He curb stomps Balor in the middle of the ring. Rollins leaves only to return with another curb stomp.

The search continues in the worst egg hunt ever.

Sami Zayn has some information for Mr. McMahon. He knows who took the egg. Well, he’s pretty sure. Sami will bring that person to McMahon when they arrive at the arena.

Sarah Schreiber asks Kevin Owens if he has a response to Seth Rollins. KO doesn’t care; he’s too busy looking for the egg. Owens will have great interest in who walks out of RAW tonight as champion.

The Street Profits vs. AJ Styles and Omos

The Street Profits have a duffle bag with them. What’s in the bag?!? Well, we find out what was in the bag during the match. It was a fire extinguisher. Angelo Dawkins uses it to save his partner by spraying Omos and AJ Styles with it. They get disqualified, but both men are still standing.

Queen Zelina and Carmella are not worried about Nikki A.S.H. in their tag team match.

For the all the smack Zelina was talking about Nikki, the champ is taking the fight to her. Carmella has to break up a pin and gets chased off by Rhea. Carmella takes out Rhea on the floor, smashing her into the ring post. With the ref distracted Carmella super kicks Nikki from the apron. Zelina hits a Code Red and covers Nikki for the three count.

Sonya Deville has good news. They know who took the egg. Sami tries to take credit as Austin Theory walks in with the egg. Adam and Sonya take off as Mr. McMahon tells Theory to take a seat. Austin just wanted to take selfie with it and took it back to the hotel with him. Vince wants to see the selfie and is impressed. He drops all charges and gives the championship match to Theory. Austin gets a selfie with Mr. McMahon. Sami is beside himself.

Alexander hits Reggie with the Lumbar Check and covers to get the win.

At the bell, all the lower card runs out for their shot at Alexander. Wait? What are the Viking Raiders doing in this group? They are better than this. Out of nowhere, Dana Brooke comes flying in with a neck breaker. She covers and gets the three count.

After the pin, the male superstars look confused on what to do and let Dana celebrate in the ring.

In the locker room the Mysterios have a heart to heart. Dominik tells his dad that he froze up when he say Rey in the Hurt Lock. Rey tells his son that he can fight his own battles, but tonight they will fight side by side.

Sarah Schreiber scores an interview with new 24/7 champ, Dana Brooke, who tells her that she knows she has a target on her back, but she can show the world who she is.

Yea, we all know where this is going, but first MVP lets Rey know how much respect he has for him as a wrestler. As a father, not so much. He needs to teach Dom that monsters are real. MVP wants to know what Rey will do when Dominik is crying out for help in the Hurt Lock. Sure Rey and Dom get some offense in early, but it’s only a matter of time.  Lashley spears Rey and then catches Dom in the Hurt Lock. Dominik taps out.

Kevin Patrick is with Big E, who talks about his match with Roman Reigns last night. He takes full blame for the loss, but tonight he has his hands full with Seth Rollins and Kevin Owens and now a title match with Austin Theory.

Patrick then welcome Liv Morgan to the interview area. She is quickly interrupted by Becky Lynch, saying Liv under delivered at Survivor Series. The champ knows Morgan can’t cut it. Liv has heard enough and smacks Lynch in the face.

Apollo Crews walks out to answer the United States Championship open challenge. Crews doesn’t want to wrestle tonight, though, since they are in Priest’s home town.

Sami Zayn interrupts, yelling about the conspiracy against him and it goes all the way to the top. Sami wants to answer the open challenge.

Is Damien Priest back to being a face now? He sure looked like a heel last night. Priest catches Sami on the top turnbuckle, but Zayn fights him off with a sunset flip powerbomb. Sami can’t get the pin, so he just takes the title belt. This sends Priest off the deep end. He pummels Zayn in the corner and then slams him in the middle of the ring. He hits the Reckoning and covers to get the three count.

Austin Theory is excited for his first WWE Championship match and he could become the youngest champ in history.

In a move that shouldn’t surprise anyone, Seth Rollins comes to ring side before the match even starts. Minutes into the match, Kevin Owens joins the fun, making his way to ringside. Austin uses the distraction to hit a back elbow and a slam. Big E kicks out.

After a commercial break, Big E is focused, slamming Theory to the mat and hitting big splash. Theory drops the champ into the middle turnbuckle and hits a drop kick. Big E runs into a knee on the apron, but the champ recovers with a Uranage. On the floor Big E stares down Rollins and Owens. Rollins hits the champ with a cheap shot as he enters the ring. Owens tosses Rollins into the ring and the two argue on the floor. Theory watches from the ring. The distraction allows Big E to hit the Big Ending and get the three count.

After the match, Big E takes out Owen and Rollins. He hits Seth with the Big Ending in the middle of the ring.

After weeks of RAW featuring wrestling and having strong episodes, tonight’s show undid all that good work. A literal egg hunt was the through line for the show and set up the man event. Talk about stupid. After a strong RK Bro segment and match, RAW went down hill and completely cratered. Is it any wonder that one of the worst shows in recent memory is one where Mr. McMahon had a prominent role?