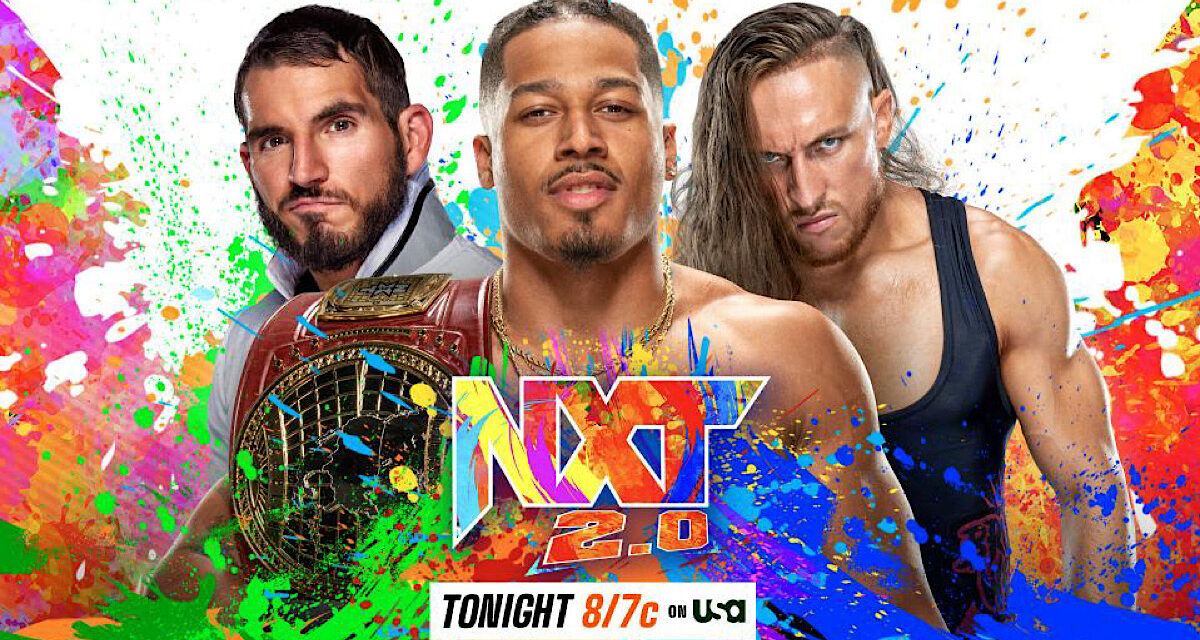 It should be unanimous by now that NXT 2.0 was a major downgrade. The black-and-gold brand of beforetime is a past memory, but those like Tommaso Ciampa, Kyle O’Reilly, Roderick Strong, and Johnny Gargano are keeping the nostalgia alive — at least until contract expirations or People Power come into play. Tonight, Gargano competes for the North American Championship in the main event of NXT. Could it be “one final beat” for the heart and soul of the brand?

Here’s a new one. WWE’s signature opening is abruptly stopped by Waller, who is in-ring with a microphone. He cuts a commendable “you people” promo towards the audience until the NXT Champion Ciampa makes his entrance. Waller’s egregiously bad attire makes Ciampa’s whooping very satisfactory, but the Aussie gains control during picture-in-picture. Waller holds his own against NXT’s best — hitting perfect springboards, dives, and what have you — but a beautiful counter into Willow’s Bell gives Ciampa the one-up and victory.

LA Knight reacts to the previous matchup by saying “Waller sucks,” although the Aussie undeniably proved himself. Joe Gacy steps in and issues a challenge through his “perverse” lingo.

Toxic Attraction is met backstage by Dakota Kai, who is laughably twitching and acting morose. They walk past Kay Lee Ray casually breaking glass, because that’s sorta her thing.

Last week, Cameron Grimes went against Kenny Rogers advice and counted his money at the poker table — which he ultimately was powerbombed through by sore-loser Duke Hudson. With literal tears in his eyes, Grimes cuts a heartfelt message about his humble beginnings, which was symbolized through his long hair. Hudson, who chopped some inches off Grimes, interrupts on-screen and accepts the challenge: Grimes faces Hudson at WarGames in a hair-versus-hair match. There’s the consecutive week of Grimes and Hudson putting on an amazing segment.

Indi Hartwell is interviewed about Dexter Lumis’ condition, saying that his hand is fractured. Carmelo Hayes and Trick Williams “took away (Lumis’) ability to draw, his ability to express himself,” which is some unexpectedly good storytelling coming from NXT 2.0.

A vignette for Tiffany Stratton explains that “Daddy” paid for her tennis lessons. Daddy also thinks Stratton is a good enough wrestler for national television, but time will tell.

Andre Chase is leading his Chase University students on a field trip. He backhandedly disrespects Cameron Grimes, who tells the professor to “go to hell.”

It’s Escobar’s first match under the NXT 2.0 banner, and it probably won’t last long; eventually, the double knees and Phantom Driver put it away. Elektra Lopez takes the microphone, but she’s interrupted by Von Wagner and Kyle O’Reilly and the NXT Tag Team Champions Imperium. The championships will be defended at WarGames, but against who is the question.

“Are we really gonna do the whole ‘can we coexist’ thing? It’s boring, old, and outdated,” says Cora Jade to Zoe Stark, Io Shirai, and Raquel Gonzalez. Tell ‘em, Cora.

Tony D’Angelo is interviewed backstage, saying that his money’s on Carmelo Hayes tonight. “Back to the three stooges at the desk,” says D’Angelo.

Rose is the NXT Women’s Champion in a division where Io Shirai and Raquel Gonzalez are active; prior releases don’t help the cause either. It’s an awkward matchup until Kay Lee Ray distracts the referee with a baseball bat, which allows Jade to roll up Rose for three. The upcoming WarGames match, headed by Rose, will be rough.

Gacy versus LA Knight is the scheduled matchup, but Grayson Waller blindsides the latter. Referees bring them away, and Diamond Mine approaches Gacy in-ring. Hilarious stuff from Gacy, saying that “Mr. (Roderick) Strong’s name alone is an example of toxic masculinity, and the NXT Cruiserweight Championship is an example of exclusivity and weight shaming.” Despite claims of exclusivity, Malcolm Bivens makes the match official: Strong versus Gacy at WarGames. He orders the Creed Brothers to attack, but the appearance of Harland stops them.

MSK’s sitcom continues as they’re pulled over for going seven mph. They’re asked to open their stash, but a speeding car turns 12 away. Yeah, so that went nowhere.

Solo Sikoa “was always by himself,” in an attempt to differentiate himself from his brothers apparently. Regardless, his presence is felt through an effective vignette.

It’s official: “Mei Ying has passed on her strength and spirit,” says Boa in a package. But the overproduced mystical stick isn’t gone forever, because Boa is her successor.

Props to Briggs and Jensen for somehow working in cowboy boots and blue jeans; they can’t possibly be comfortable. Meanwhile, LA Knight and Grayson Waller are still brawling backstage as Briggs makes the comeback. GYV tries to pull a sneaky, but Briggs and Jensen overcome it to win.

Before the last commercial, Johnny Gargano makes his entrance. The audience is on their feet for perhaps one final beat.

Unlike the majority of tonight’s undercard, the main event is immediately energetic and engaging while still being incredibly crisp. The three competitors in-ring represent NXT 2.0’s diminishing roster of talented professional wrestlers, which will become even smaller during the upcoming months. Gargano connects with outside dives before picture-in-picture, but afterwards, everybody has equal offense of nonstop strikes and reversals. Nearing the end, Dunne hits Bitter End but is attacked by Tony D’Angelo. Hayes, making good on D’Angelo’s bet, connects with the top-rope leg drop on Gargano to retain his championship.

Both the opening and closing segments were significantly above standard (it must be because of Grayson Waller!), although that doesn’t say much. Besides another great showing from Cameron Grimes and Duke Hudson, the remainder was the usual slog of a show. But I appreciate the improvement and focus of direction heading into WarGames.