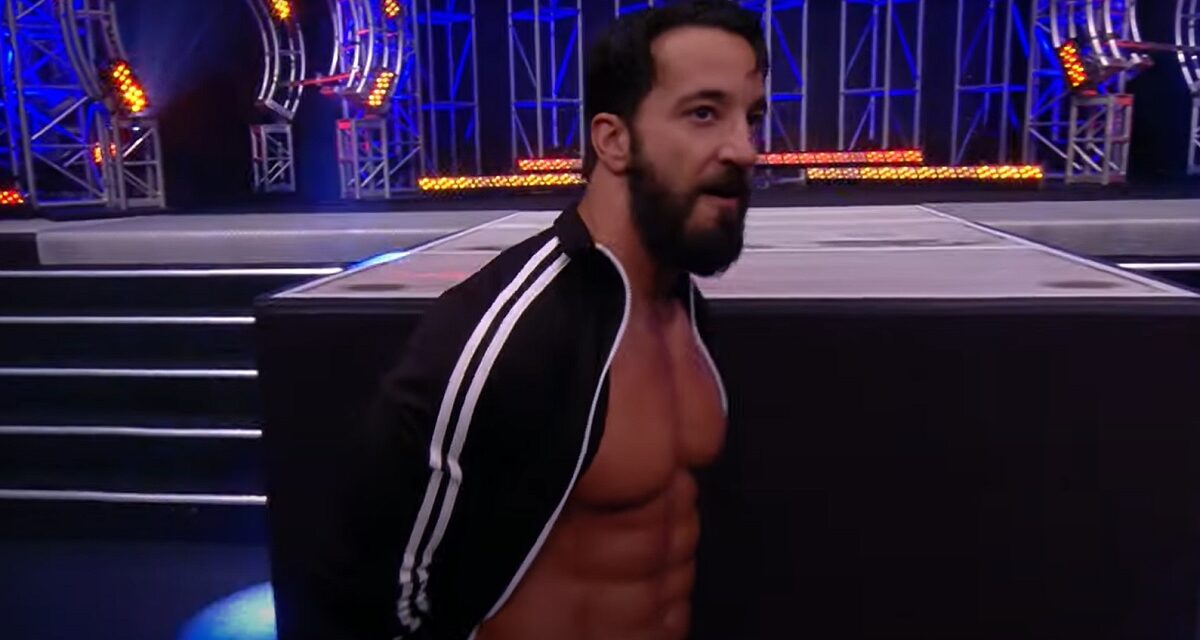 Hey yo, AEW faithful, and welcome to our weekly coverage of AEW’s YouTube offerings, Dark and Dark Elevation.

Elevation had a few highlights in a shorter show that featured six action-packed matches.

The women of AEW were featured in half of the matches, and of those, the opening tag match was particularly good. But in another match, Tay Conti basically squashed newcomer LMK, and I don’t know who this benefited. Tay is not a monster that warrants that kind of dominance, and the match didn’t really help give LMK any TV experience of note. The match between Riho and Kayla Sparks on the other hand was a good match for Sparks in a losing effort.

The Acclaimed are always good in my opinion, and their match this week – a comedy-heavy match that saw them team up with Serpentico (who has been randomly paired with an established heel team for the second time) against Orange Cassidy, Chuck Taylor, and Wheeler Yuta – was a fun one. In fact, it’s my pick for match of the night – though I appreciate it may not be to everyone’s tastes.

All in all, it was a good show with some really fun matches a short run-time, making it well worth your time to check out.

Dark was a longer show, but it also flew by thanks to some smart pacing of the matches. There was a great must-see match that you should not miss: the one between Fuego del Sol and the debuting Tony Nese. Several of the other matches featured some up-and-comers who also had good showings, like the monstrous Tao Liona and his new partner Bison XL – those two may have lost, but they looked great in their match nonetheless.

There were really no bad matches on Dark, so picking a match of the night is a hard one (and that’s a good thing).  I think I’ll have to call a three-way tie between Tony Nese’s debut against Feugo, 2point0 vs. Liona and Bison, and the main event of PAC vs Tiger Ruas.

2. Frankie Kazarian vs. Victor Benjamin. This one ran at a break-neck speed. Kaz looked fantastic floating around the ring and made Benjamin look more experienced than he is. Kaz would lock in a Crossface Chicken Wing for the win. Benjamin looked good in his AEW debut, and with some more experience, could really be one to watch.

3. Riho vs. Kayla Sparks. This was a nice back-and-forth match and worked to get Sparks some good time in the ring. But it would be Riho with a Bridging Suplex for the win.

4. FTR (w/Tully Blanchard) vs. Waves and Curls. This was a very short but fun match with some comedy spots. FTR are not known for fooling around, but played it out perfectly (is there anything FTR can’t do?) and hit the Big Rig in a fun squash.

5. Tay Conti vs. LMK. This was basically a squash that say Tay overpower LMK with some big kicks and the DDTay for the win.

6. The Acclaimed and Serpentico vs. Orange Cassidy, Chuck Taylor and Wheeler Yuta. The main event was a great one. Comedy bits by Orange, Chuck Taylor, the Acclaimed and of course Serpentico supplemented the in-ring action perfectly. The Best Friends would get the win with an Orange Punch on Serpentico. Both teams just looked like they were having a blast in the ring and it was very fun to watch. I highly recommend this one if you have five minutes to spare.

1. The show opened with FTR cutting a promo from the porch of their house. They issued an open challenge to all Luchadors for the AAA tag team titles in a great promo.

2. Proud and Powerful (Santana and Ortiz) vs. Joe Coleman and Idris Abraham. Coleman and Abraham (known on the Ontario scene as Halal Beefcake) were in great shape at the start of the match. But then Santana would run roughshod over Abraham before double teaming Coleman and then re-running over Abraham. Ortiz got the pin in a very entertaining extended squash match. Proud and Powerful looked amazing, and I can’t wait for their next program with FTR.

3. Nyla Rose (w/ Vicky Guerrero) vs. Viva Van. Viva is not small and would probably out power most of the division, but she was no match for Nyla, who hit the Beast Bomb for the win.

4. Nightmare Family, Brock Anderson and Lee Johnson (w/ Arn Anderson) vs. Eli Knight and Malik Bosede. There were some edits in this match, so something may have gone wrong in the execution of this one. In the end, Lee hit a Frog Splash, but then let Brock get the pin.

5. RSP vs Daniel Garcia (w/ 2point0). RSP (aka Rickey Shane Page) is a veteran independent worker and Garcia is talented beyond his years, and because of this Garcia was able to beat up the bigger man and it really looked good. RSP would get some great power spots in but was always out-paced by Garcia. Garcia locked in a Rear Naked Choke on the bigger man for the win. This was a fun match.

6. John Silver and Alex Reynolds (w/ Dark Order, -1, #10 Preston Vance and #5 Alan Angles) vs. Sean Carr and Marcus Kross. Marcus Kross has some amazing Hair (trust me check it out). Reynolds and Silver beat on Carr for a while and then beat on Kross and his amazing hair. Kross was on the wrong end of a Dark Destroyer DDT and Silver covered him for the three.

7. The Acclaimed vs. Ishmael Vaughn and Dontae Smiley. Vaughan got out-wrestled and then Smiley got double-teamed. Caster hit the Mic Drop, and Bowen got the pin.

8. Santana Garrett vs. The Bunny (w/ The Butcher). Santana Garrett may be on the B-team of enhancement talent but she’s very good and worth a look. The Bunny was very vocal in a surprisingly one-sided match. In the end, The Bunny hit Garrett with her Down the Rabbit Hole elbow drop for the win.

9. 2point0 (w/ Daniel Garcia) vs. Bison XL and Toa Liona. Bison and Liona used their size to control the beginning of the match. But then 2point0’s craftiness allowed them to get the upper hand on Bison. When Liona got the hot tag, he ran wild on both members of 2point0. But Garcia would make the difference, and his involvement let 2point0 hit the Two for the Show finisher on Bision XL for the win. I can’t stress enough how good the two big men looked working with the smaller team of 2point0. Liona and Bison are going to go places.

10. Red Velvet vs. Sholance Royal. Sholance sang like a opera star through most the match and it was memorable if not a bit distracting. It was a good back and forth match with both women in control at times. Red Velvet hit the Final Slice for the win. After the match, The Bunny attacked Velvet.

11. Bobby Fish vs. Ryzin. Bobby Fish just beat up Ryzin with punches, kicks, an Exploder into the ropes and a big kick to the head for the easy win.

12. Feugo Del Sol vs. Tony Nese. Feugo came out to a great crowd reaction in the second last match of the night. Nese looked to be in great shape for his AEW debut. The match saw Fuego’s speed go against Nese’s power, but then Nese proved he wasn’t just limited to the ground game, as he tried some high risks moves of his own. This was a back-and-forth contest that saw both of them hit spots all over the ring and out on the floor. Feugo locked in a triangle arm bar only to be Powerbombed into the turnbuckles and then kneed in the face. After that, it was an easy three count for Nese. This was a fantastic debut for him, and a fun match overall.

13. Tiger Ruas vs. PAC. This was a very physical match where action took place in the ring on the apron and on the floor. The two have a very similar smash-mouth style, and the result was a match that you should go out of your way to seek out. It should be noted that this was only Ruas’s second televised match, and to go toe to toe with someone like PAC can only elevate him. PAC locked in the Brutalizer for the submission win. But even in losing, Ruas looked great.