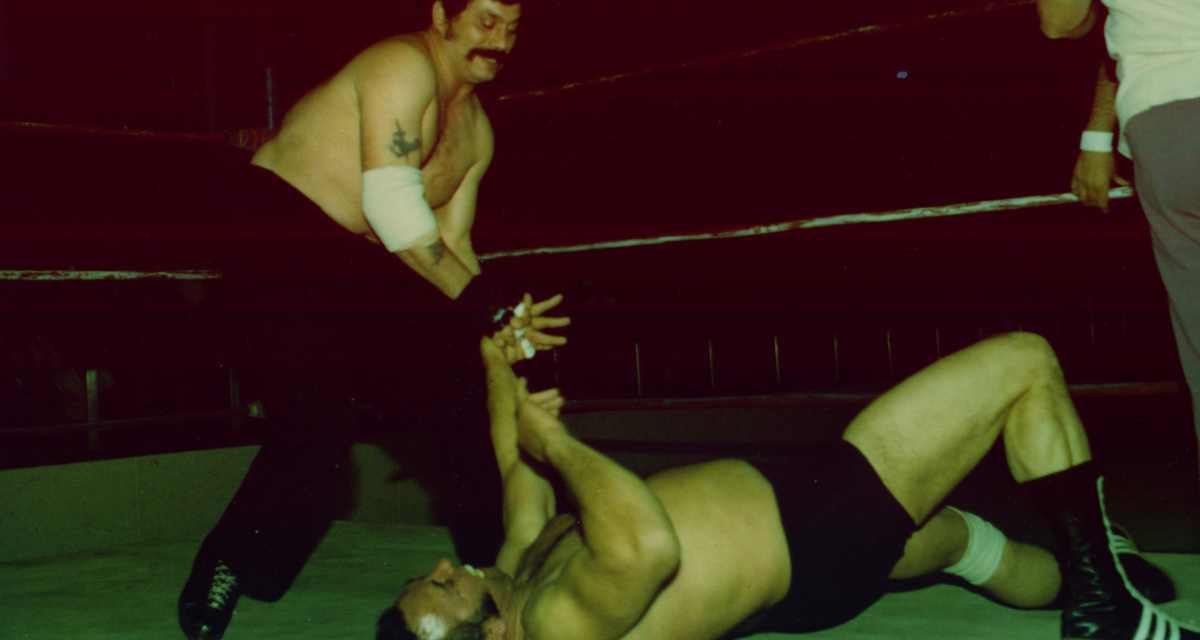 Earning someone’s trust usually takes time, but in the case of Peppi DiPasquale, who died on October 10, 2021, at the age of 83, it was almost immediate.

He reached out to me in mid-2010, and then I wrote a story about his days in pro wrestling — see 2010’s Dino Nero was a carpentiere eccezionale. We were in touch ever since.

We first met in person at the Titans in Toronto dinner in the fall of 2010, and Peppi just loved seeing his old friends again, especially those who had come up from Pittsburgh, where he had found regular work as an enhancement wrestler under the name Dino Nero.

Peppi brought me a stack of photos to scan from his career, and there were a few gems, reproduced here.

Our back and forth, through email or Facebook, was delightful, though, to put it candidly, Peppi butchered the written English language the way he was pummeled in the ring, making others look good. “Hi geg, I’m not a good writer so bare whit me !!!” he wrote me once.

Italian was his first language, of course, and getting it right in English just wasn’t him, and, to me, it was a big part of his charm. On the phone, or in person, his English was fine, if accented.

Again, comparing it to his career, he had a sense of humor about it all. As someone who primarily put others over, he chuckled over the photo at the top of the page: “Hay look at this I’m standing up” he wrote me as a caption, referring to the many, many times he looked up at the lights.

Peppi didn’t have a lot of photos of his career. As fans, we may remember the “jobbers” but we don’t necessarily get photos with them.

The photo below is about a year into Peppi’s career, and he has Fred Atkins down on the mat in 1962. Though Atkins lived nearby, in Crystal Beach, Ontario, and trained wrestlers, DiPasquale trained with John Bogner. 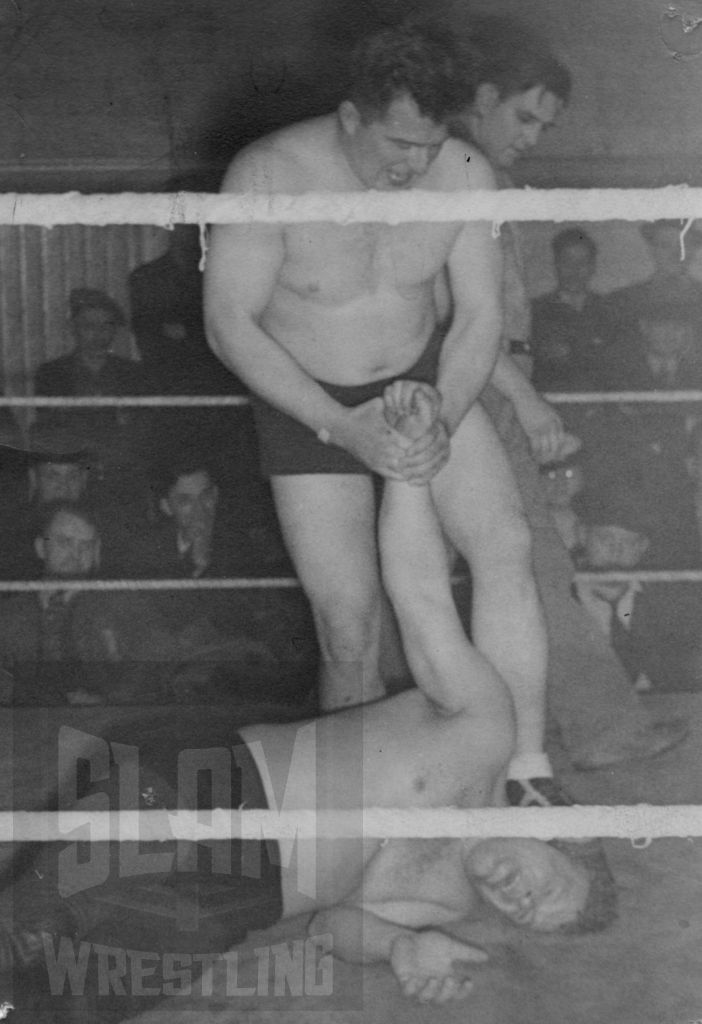 I love the photo of Peppi with the chair that he shared with me, and looking at it now, I can picture him as a union rep with a similar weapon fighting with management at the General Motors plant in St. Catharines, where he toiled most of his life, in the furnaces. 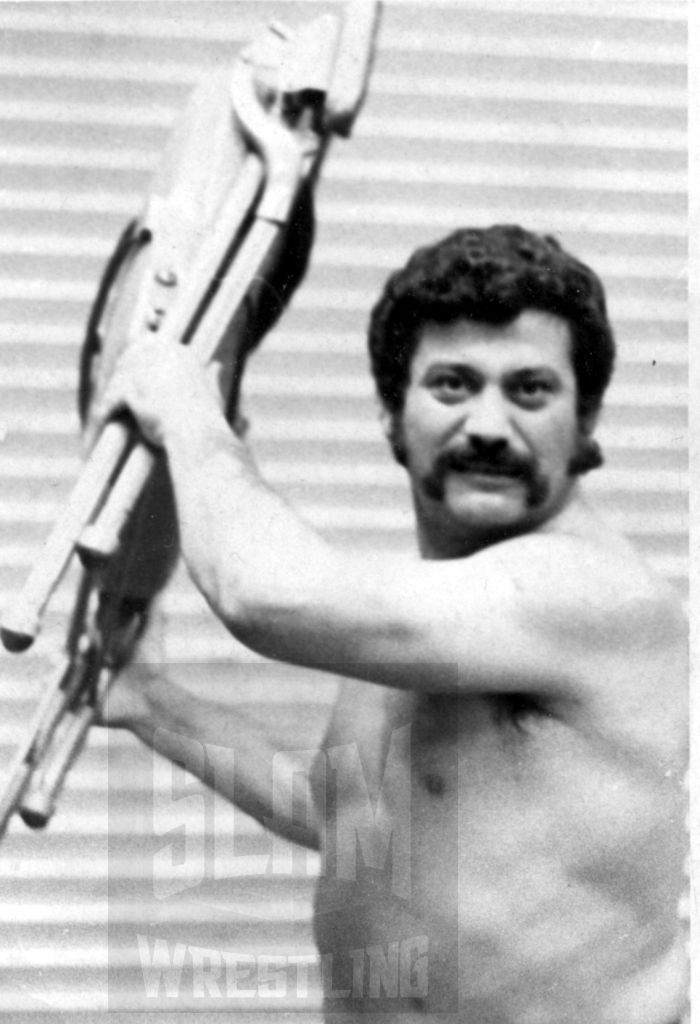 We tried to establish who the big dude was in this photo, but he didn’t know — but remembered his stiffness in the ring. 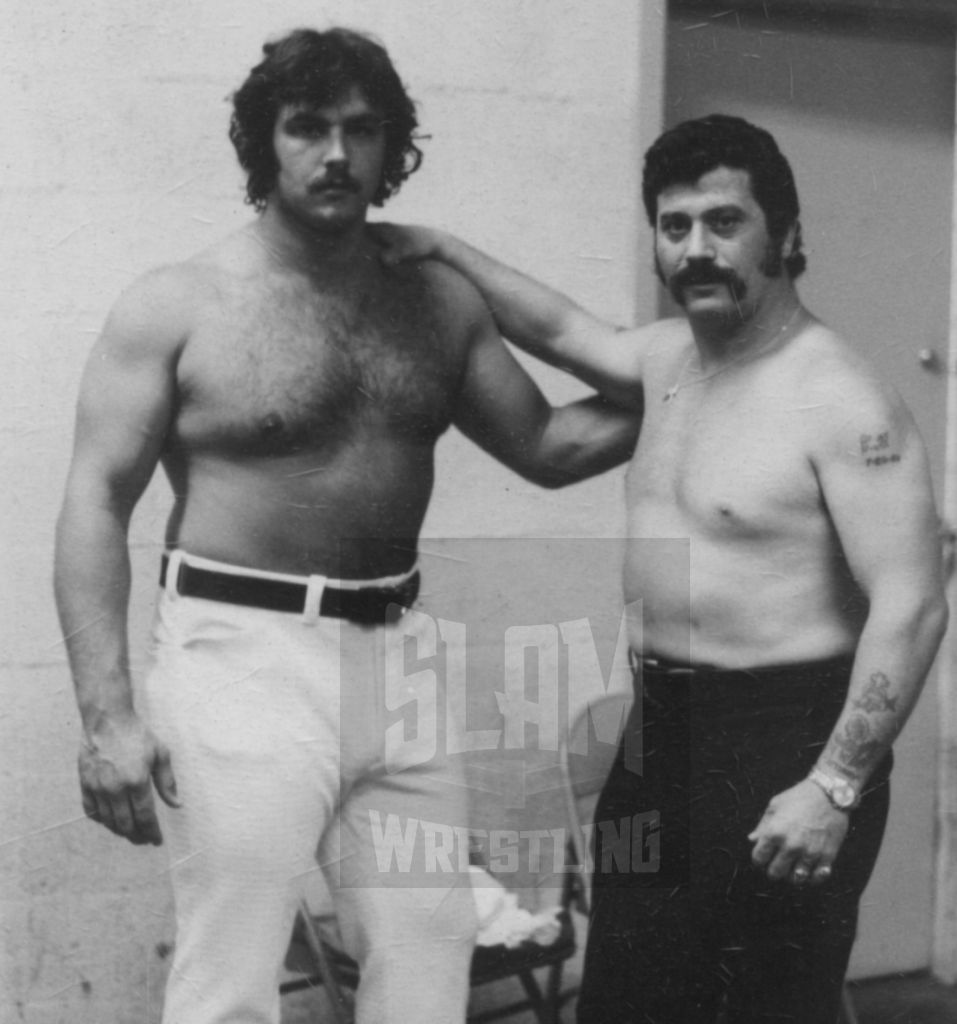 “this picture wase made in pitburgh he camein for the t. v, &the arena show, but never seen him again. BIG TIME CROW BAR”

Like just about everyone in the wrestling business, Peppi loved “The Wolfman” Willie Farkus — “MY BIG TIME FRIEND , THE WOOLF MAN” — and it was great to put them together again at a couple of Titans in Toronto events. 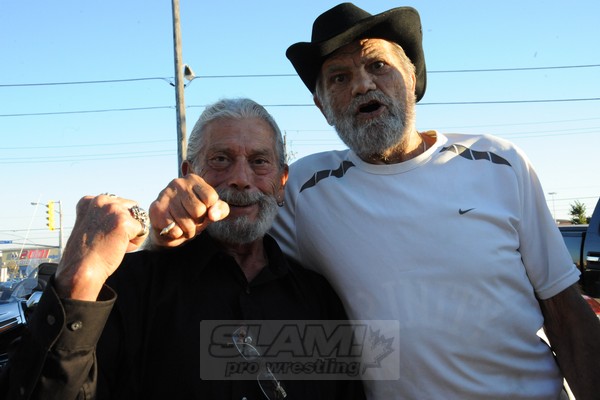 Peppi DiPasquale and The Wolfman at Titans in Toronto in 2014. Photo by Mike Mastrandrea, www.mikemastrandrea.com

Fortunately, the SlamWrestling.net photographers were there to capture moments like this one at Titans in Toronto too: 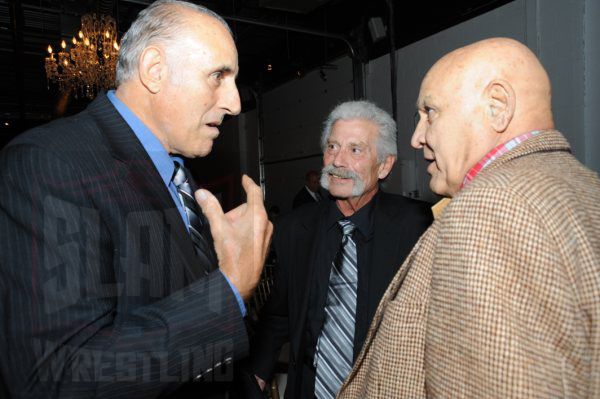 Peppi lived in Port Colborne, Ontario, not far from Niagara Falls and the U.S. border. He was able to go to  the first Annual Ilio DiPaolo Memorial Show at the Buffalo Memorial Auditorium in June 1996. He shared some of the photos from that event, with other wrestling legends. 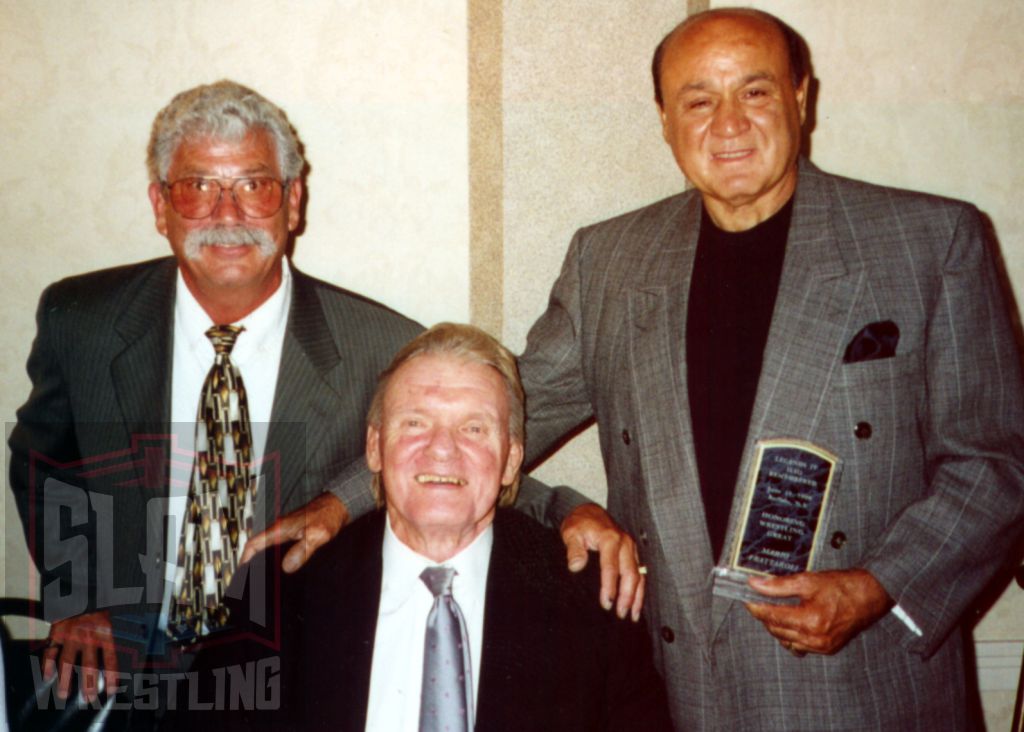 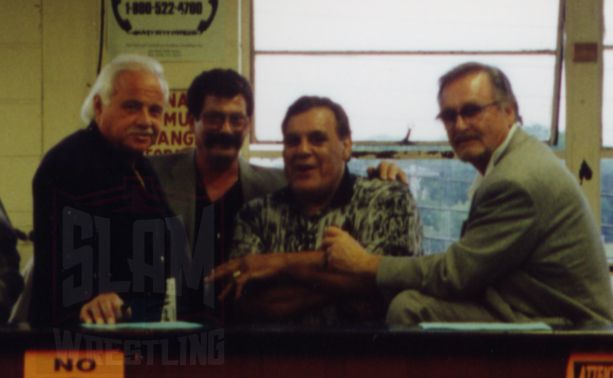 On another occasion, Peppi DiPasquale (second from left) got together with Bruce Swayze, Angelo Mosca and Reggie Love.

The last time I saw Peppi in person was at a private gathering of old wrestlers at Bernie Livingston’s home in Mississauga, Ontario. It was a great time and, unlike the Titans in Toronto events that I ran, I was able to relax and enjoy myself. 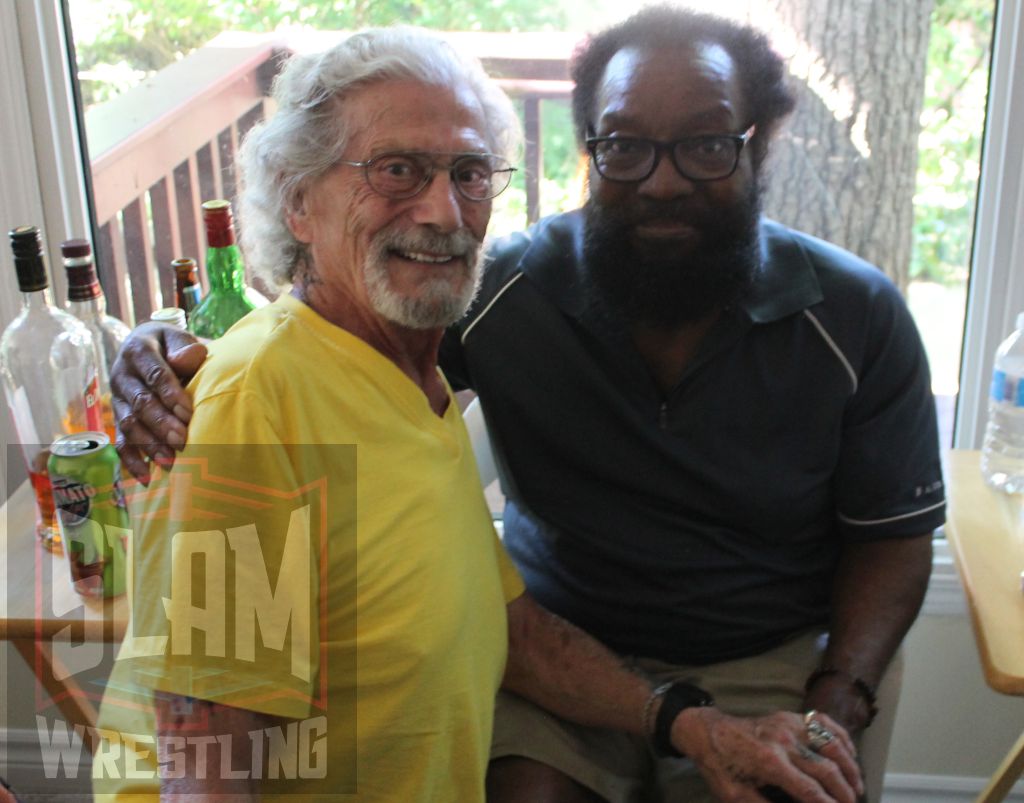 Peppi DiPasquale and Big Mac at Bernie Livingston’s in 2018. Photo by Greg Oliver

Unlike a lot of the wrestlers around southern Ontario, I never got to know Peppi’s family. He loved his motorcycle, so would ride in solo to events. My thoughts go out to his two sons, and his extended family on his passing.

I’ll sepll something wrong in your honr today, Peppi!

Dino Nero was a carpentiere eccezionale