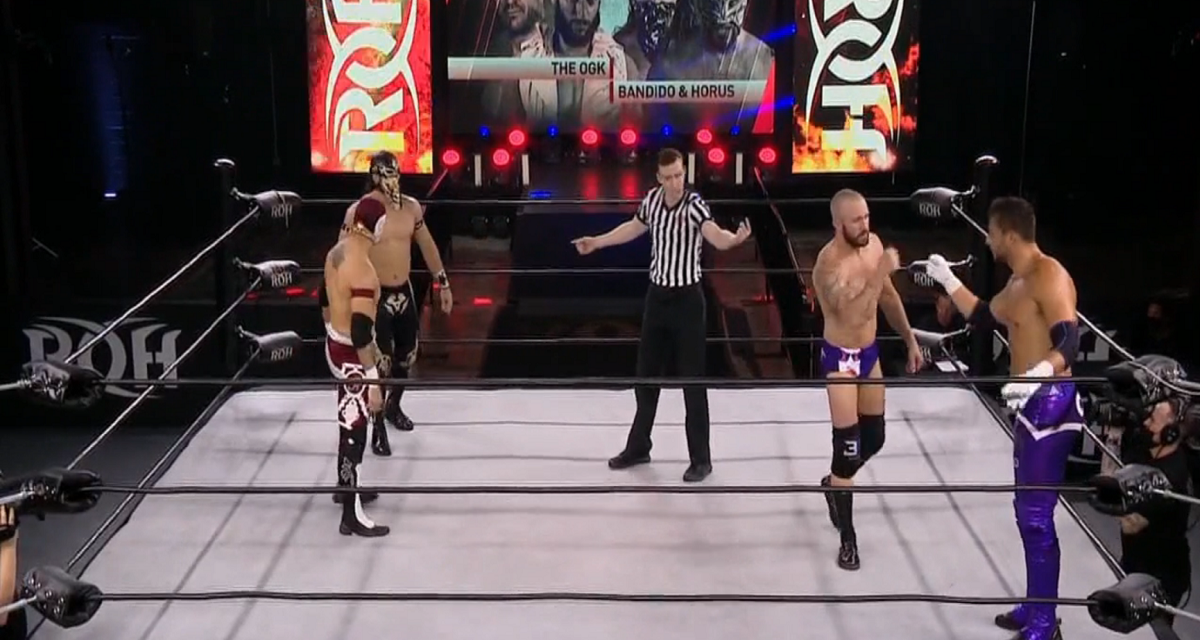 Greetings and salutations everyone and welcome to my weekly ROH TV report. We are gearing up for the build up to Final Battle so the hope is that the various title pictures will start to become clearer week over week on ROH TV. Without further ado let’s get to it.

The show started with Ian Riccaboni running down the card for the evening. Once that was done, The Briscoes came out to join Riccaboni on commentary.

S.O.S were out alone without the rest of Shane Taylor Promotions. As they made their entrance we got a cut in promo from S.O.S which consisted of them saying how they will win the match and teach Castle and Draper a lesson. As Castle and Draper were making their entrance we also got a cut in promo where Castle was showing his enormous ego as Draper literally yawned which Castle spoke.

The match started with Castle and Kaun Draper quickly comes in as Castle wants nothing to do with Kaun. Kaun took the early control of the match. S.O.S then double teamed Draper as they shove Castle onto the floor from the apron.

Back from commercial we see Draper getting the brief advantage over Kaun. Castle tagged in and both he and Draper delivered an assisted gutwrench slam onto Kaun. Castle quickly tagged out again. Castle was showboating on the outside by running laps around the ring. As Castle was distracted with his laps, Kaun was able to get the hot tag to Moses. Moses comes in and gets full control of the match. S.O.S delivered a Doomsday device to Draper but it wasn’t enough to keep him down for the three count. S.O.S kept control of the match as they delivered a Double-Team DDT to Draper for the pin and win.

After the match, Tag Team champions, Kenny King and Dragon Lee jumped S.O.S. The tag champs knock the belts over Moses and Kaun’s head to lay them out in the middle of the ring. The champs pose over the fallen S.O.S as they take a selfie. as the champs left, Moses issues a challenged for the tag titles.

It’s now time for the first triple threat match to determine who will face Rok-C at Final Battle for the ROH Women’s Championship. Willow Nightingale made her entrance for a three-way. She got a cut-in promo where she says she is two wins away from a title shot at Final Battle. Miranda Alize was out next and in her promo she conveniently forgot Nightengale’s name. Last but not least, The Allure came out with no promo.

As the match got underway, Love and Alize formed an alliance but Nightingale was able to overcome this with a superkick to Love. Love didn’t take kind to this as she choked Nightingale in the corner as we headed to commercial.

It’s any woman’s game in this triple threat! Tune in for free here: https://t.co/i2jLIS1sG1#WatchROH pic.twitter.com/kl4A9Uf9C2

Back from commercial and Nightingale blocked a double suplex and instead landed a double DDT to Love and Alize. After some more offense from Nighingale to the temporary team of Love and Alize, the inevitable happened and the heels (Love and Alize) turned on each other. Love and Alize trade forearms in the middle of the ring. Nightingale comes in and attacks both women and then hit a split-leg dropkick off the apron to both women on the outside. Alize got up, bit the fingers of Alize, got into the ring and hit a tope suicida to both women on the outside. Love now got up, got a quick advantage and hit a crossbody off the apron to both of her opponents. With Love and Nightingale in the ring, Love kicked Alize off the apron who was trying to make her way back into the ring. Nightingale grabbed Love from behind and rolled her up for the pin.

Who will she face 🤔 stay tuned for the next triple match airing soon! https://t.co/i2jLIS1sG1 pic.twitter.com/rwxVkHws6V

It is main event time! First out was the OGK, Mike Bennett and Matt Taven. As they come out we get a promo from the OGK. Bennett said a win here would put them in the tag title picture. Bandido and Rey Horus come out and in their promo they said they’ll win because their team has the world champ.

Bennett and Horus started the match. They have a very 50/50 confrontation and eventually tagged out to their respective partners.  Taven hit a dropkick to Bandido as we headed into commercial. Back form the break, The OGK double-teamed Bandi Bennett focused his attack on Bandido’s left knee which seems to be the target for all of Bandido’s recent opponents. Taven with an enziguiri and blue thunder. After sometime, Bandido was able to get enough energy to tag in Horus. Horus cleared the ring but tagged Bandido right back into the match and on his way out he decided to jump over the rope and take out Bennett at ringside.

Excellent teamwork being showcased in this match with OGK!! Will it be enough to lock in another victory? Tune in to find out!#WatchROH https://t.co/i2jLIS1sG1@MattTaven @RealMikeBennett pic.twitter.com/OhgWsG7uVM

Back from the break, Bandido and Horus are taking care of Taven. Luckily, Taven found an opening and was able to tag Bennett back into the match. The OGK performed a spike piledriver to the ROH champion, Bandido. Horus was able to make the crucial save. All four men are laying in the ring. Bennett and Horus were up and began trading forearms on one another. Now the intensity picked up as Taven took out Horus, Bandido took out Taven, and Bennett took out Bandido. Horus with an octopus to Bennett but he ran him into the corner. Bennett avoided a 450 splash. Backpack stunner to Horus for the pin and HUGE WIN to shake things up in the tag team division.

This week’s TV was a fun watch. We have a very interesting tag team division right now with S.O.S issuing a challenge to the champions. We also have the OGK making a case for them to be the number one contenders. The women’s division is also a fun watch as we have the mini eliminator challenge to determine who will face Rok-C at Final Battle. All in all, this was a fun show but it still wasn’t must watch. Until next week!