Dino Nero was a carpentiere eccezionale

It wasn’t long into his wrestling career that Peppi Dipasquale realized that his real name wasn’t going to work. Mainly, that was because it took too long to sign autographs. So he came up with Dino Nero, an underneath name familiar to crowds from Pittsburgh to Detroit to Buffalo.

“It was easier for me to sign autographs. As a babyface, they wanted us to sign autographs in Pittsburgh. I don’t want to sign Peppi DiPasquale — we’ll be here all day. I never went to school, so I’m not what you call a quick writer,” Dipasquale recently told SLAM! Wrestling. “Dino” was from Corradino, and Nero came from a friend. 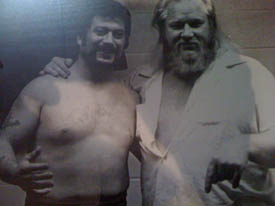 Dino Nero and Eric the Red.

He is proud of his work as enhancement talent.

“I will pat my back. When I went to work, I did my carpenter work — I build ’em very well.”

It wasn’t unusual for Dipasquale to work a couple of times a night, once as Dino Nero, and another time under a mask, having changed his boots and tights. He thinks (“I might have been once or twice”) the only masked names he used were The Ram, the Masked Marvel, Ares, and the Godfather (in a tag team with Mario Frattaroli). He was able to change his size even, as the 5’9-1/2″ Dipasquale would wear boots with lifts in to make him 6’1″. At his peak, he weighed 235 pounds.

He never planned on professional wrestling as a career — in fact it was only really a part-time job for him, as he worked the furnaces at General Motors in St. Catharines, Ontario.

“I was a guy with a bad back,” he said, explaining that someone suggested that wrestling might help his back. “I didn’t see how, but, believe it or not, it did get better. And then I got hooked on wrestling, I was having a good time.”

In 1959, John Bogner was his trainer, and three or four guys were usually working out, including Tony Simon, Mario Frattaroli and Tony Parisi. It was a life lesson as well as a wrestling one, as Bogner would share stories of the old days, his traveling, and life on the road.

The following year, Dipasquale got married.

The call came in that they needed a body at the Palace Pier in Toronto for a show. Dipasquale was reluctant to make the drive himself on Highway 3 to Toronto, but did it. He got snowed in and stuck. He called Bogner, who scolded him and claimed to have never missed a show himself.

Dipasquale admitted it was intimidating being in the dressing room with stars. The only instruction he was given was, “Go in there and give them hell.” He recalls being awed by the lights and cameras — and heard his opponent growling, long before he ever came into view.

“It’s Bulldog Brower and he’s raring to eat a bear.”

Peppi initially froze, but the match ended up going five minutes or so; “He was telling me, ‘Make a comeback, make a comeback.’ But I couldn’t. I froze.”

Needless to say, Dipasquale got better at his secondary trade.

“We were getting peanuts, but we were making a living,” he said, rhyming off names he traveled with, like Terry Yorkston, Bull Johnson, Billy Red Lyons, Stan Stasiak, Parisi, and Eric the Red.

“We were jobbers. We didn’t go over, just the occasional show, that’s about it,” he said, launching into a story about actually winning a battle royale in Akron, Ohio.

“They gave me the battle royal because we were all one happy family,” he claimed. Dino Nero hid from the heels, but made sure the fans saw him; when Ernie Ladd was apparently the final man left in the ring, he dropkicked him out: “I hardly touched him!”

Naturally, a return match was booked. “It got over, the people liked it. Two weeks later, we do another battle royale, so everyone ganged up on me, of course, and I was the first guy to fly out of the ring, top rope. Heh heh heh.”

Dipasquale can list off the promoters he worked for Frank Tunney, Vince McMahon Sr., Pedro Martinez, Dave “Bearman” McKigney, the Pittsburgh office fronted by Ace Freeman, George Cannon … but only one scarred him for life.

“I did a job for The Sheik and I’ve still got marks on my forehead. Nobody wanted to do a job for him. But Eddie, he treated me good. He got me a white card to travel back and forth to the States,” Dipasquale said. “Everybody was scared because it was Eddie. Eddie was rough. I said, ‘F—, as long as he doesn’t shove it through my neck.’ We did a hell of a show. He gave me a little bit of a comeback and then he took over again, and pulled out that pen — bang, bang, bang, bang. I was done. ‘Jesus Christ, Eddie, lighten up.’ So he finally let go. There was blood all over the place. They disallowed it to show on TV. There was too much blood, I was too gross. All that work for nothing.”

A real injury happened in 1988, and he had a bad fall at work, hurting his neck and back. “They thought I was dead,” he said. Still, there were a handful more shows in 1989 and 1990 for his old friend Bull Johnson. 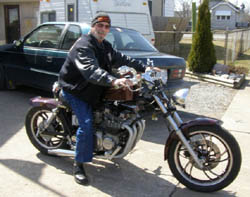 Peppi Dipasquale shows off one of his motorcycles in a recent photo.

But injuries themselves weren’t a big deal to Dipasquale, who is still known around the Golden Horseshoe as one of the top hockey trainers.

He has served as a medical trainer on the bench in Junior A, Junior B, in the AHL for the Hershey Bears, and the Chicago Black Hawks asked him to work for them, but he turned them down. Dipasquale also ran minor hockey in Port Colborne for many years.

Sometimes the training meshed well with his wrestling gigs. For example, when he worked for Niagara College, when the team went to Windsor, he’d get booked to wrestle at Cobo Hall if they had matches on that weekend.

This coming Saturday, September 18th, Dipasquale is going to get a chance to reconnect with some old friends at the fourth Titans in Toronto dinner.

“As far as wrestling, I enjoyed it. I’m very proud I was one of the guys,” he concluded.