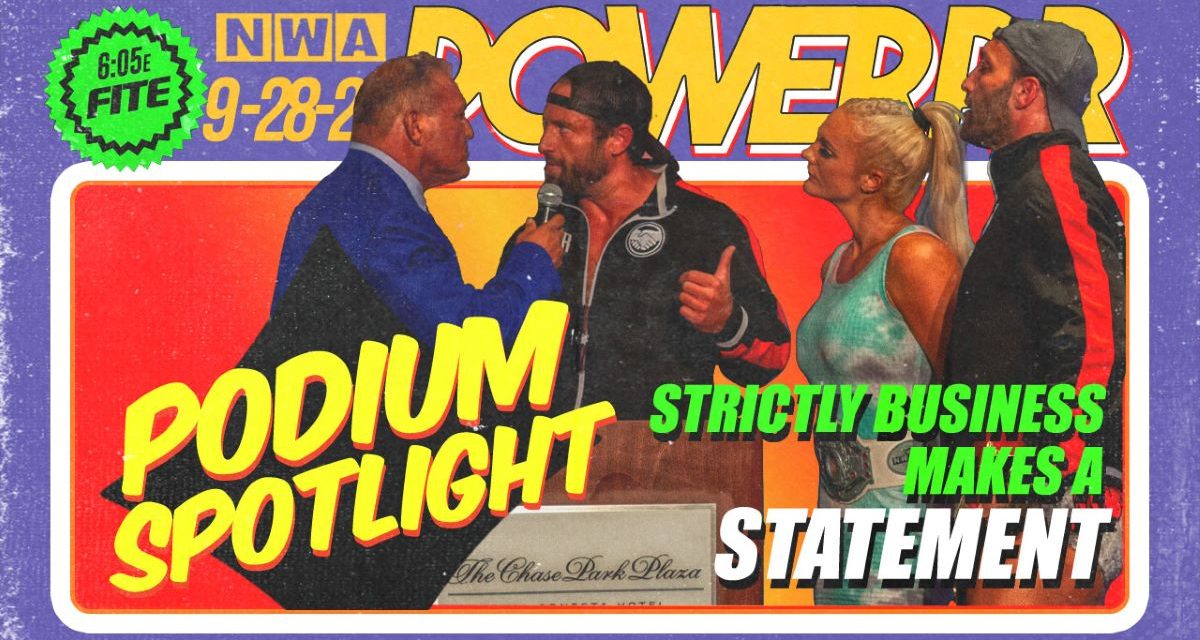 There’s a lot of action to get through, as we step Into The Fire at The Chase Park Plaza in St. Louis MO.  Best we jump right into it, as your commentators are Joe Galli, Velvet Sky, and…waitasec…Kyle Stevens?!  Galli explains that the reason for this is because Tim Storm is now at The Podium to interview the members of Strictly Business and Kamille (and I use the term “interview” loosely), given the simmering tensions all around.

In any case, Storm asks why the attacks on Melina and Murdoch were provoked.  Thom Latimer says Murdoch was a thorn in their side, and it should be Aldis still wearing that championship gold.  Latimer then tells Storm not to ask him any more questions like that again, if he knows what’s good for him.  Well, this ain’t Kyle Davis getting pushed around, and Storm goes to the ring to fight.  Strictly Business is happy to oblige.  Things don’t look good until…Nick Aldis comes in to the ring, and tells Strictly Business to stand down. Latimer is hot, but Aldis says to chill out in so many words.

Well, that was an odd turn of events.

As things gets settled down, we go to May Valentine, who has Melina at The Podium.  Melina speaks about not backing down her comments on Kamille, and states someone will take out Kamille…and then Chelsea Greene comes out.  Valentine quips that she is “A Hot Mess” (clearly she never watched IMPACT!, but we can forgive her).  Greene states she beat nine other girls, and got the NWA Invitational Cup, and no one can stop her.

Meanwhile, let’s get to the ring for our First Match, which is a … 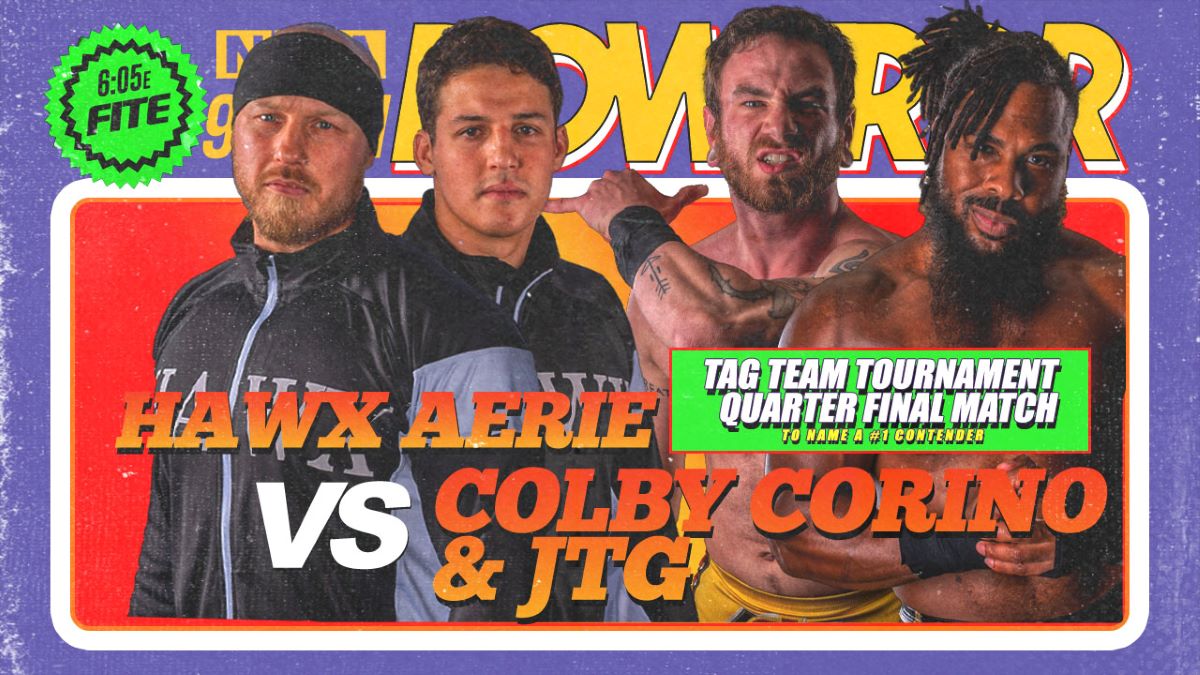 Bell rings, and we gets a handshake of sportsmanship by JTG and Luke.  From there, it’s a wrestling clinic, despite Corino trying to insert himself into the match.  Luke gets distracted, and a roll up by Jay Tha Gawd gets a two count.  Now papa Luke tags in PJ, and JTG takes controls going to his corner, where Corino tags himself in, finally.  From there, Corino wears down PJ, and hits an elbow drop for a two count.  A Corino Heel kick in corner gets a cover for another two count.  PJ answers back with a nice belly to belly suplex, and a tag to Papa Luke, who delivers a backbreaker to a shoulderbreaker, to a power slam goes to cover for a two count.

Luke wants to work Corino over, but the little douche rocket stuns Luke on the top ropes, and he is now your Hawx in Peril.  Corino tags to JTG, who slams Luke to cover for two.  Booth JTG and Luke are tag specialist, but papa Luke who lands a haymaker to knock down The Gawd, and one hot to his Aerie partner/son, and it’s a PJ en Fuego (that looks weirder than I typed it, but…eh, roll with it).  End has Hawx Aerie deliver a double team finisher to Corino in what I can describe as an assisted power slam for the win.

Your Winner, and Advancing in the Tag Team Semi-Finals:  Hawx Aerie 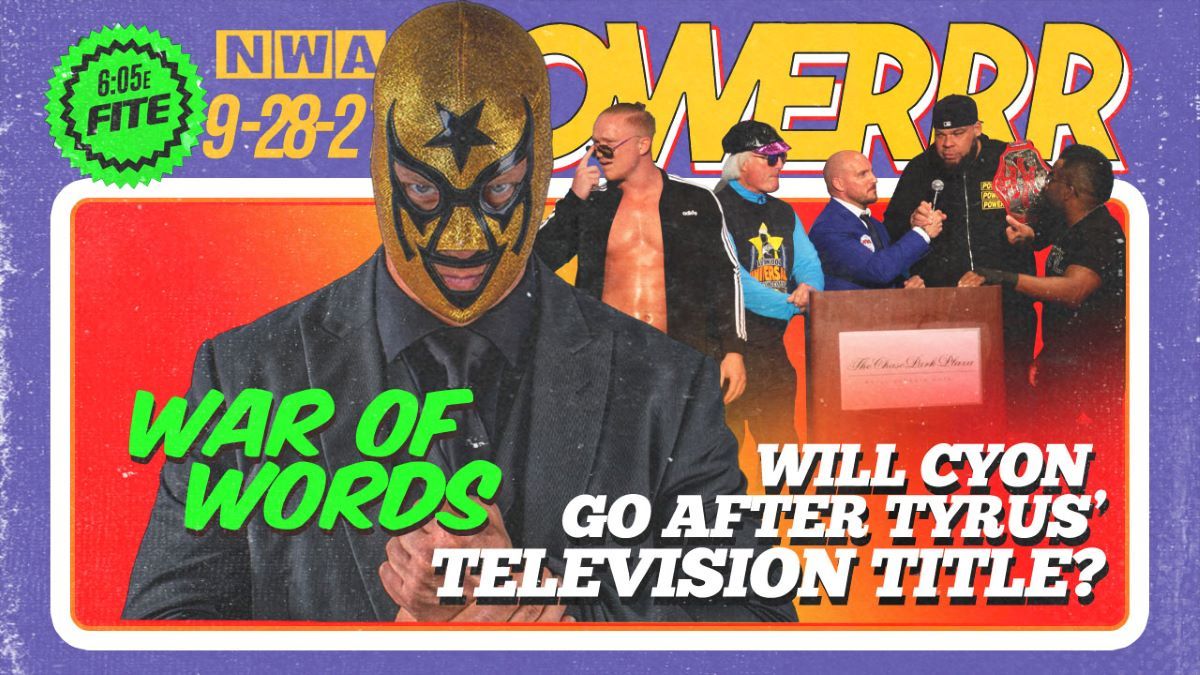 We go to Cyon, who delivers a promo recorded earlier. He doesn’t want the NWA Television title, held by Tyrus…but he needs it.  Cyon says he feels alive when he’s in the NWA, and he wants to be here.  Cyon challenges Tyrus, who he claims misses his family.  Cyon promises on December 4th, he’ll send Tyrus back to his family.

Kyle Davis is back at The Podium, with all the members of Idolmania.  As Tyrus gives BLK Jeez the honor of palming Davis’ cue ball head, Austin Idol answers if Cyon makes this kind of mistake to wrestle Tyrus, they will destroy him and take him out.  Jordan Clearwater says they’ll hurt him 111% (which Davis says that’s not a real number). Jeez chimes in with the cheap heat, saying Cyon’s like the St. Louis losers in attendance (classy).  But the Great American Smash, Tyrus, thinks he knows Cyon but can’t place it.  However it doesn’t matter because he’ll leave with the title and rip off his mask. ‘Nuff said!

And now for something different, howzabout a match for the … 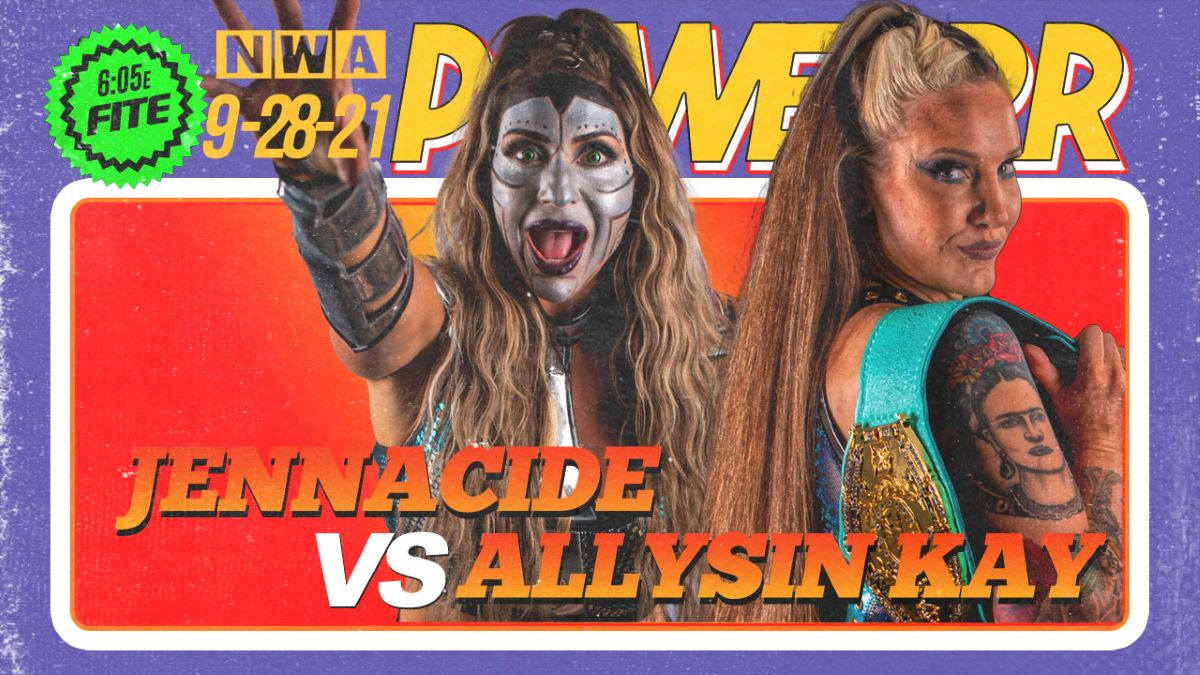 Since I missed out a couple weeks ago, (and according Bob Kapur’s recap, I didn’t really “miss it”) Marti Belle got the win two weeks ago, so now this match was made because…I dunno, somebody got ahold of WWE’s playbook?

Anywhoosles, both women are establishing who is queen bee in the ring with shoving at the start, and Kay starts in with chops to the Cyborg.  Kay goes for a tackle to the corner, but Jennacide dodges, and Kay hits the ring post.  Now Jennacide goes full Terminator (or is it Terminatrix?), and works on the injured shoulder of The Hex member, by tugging it against ropes and a Fujiwara armbar to wear down Kay.

Now Taryn Terrell comes out to celebrate, while Kay and Marti Belle come out and try to figure what the hell Lady Frost was doing there in the first place.

May Valentine gets words from earlier with the NWA Tag Team champs, La Rebelión.  Valentine asks between Hawx Aerie or The End, which team has them concerned.  Bestia 666 says it doesn’t matter because they will win, and his tag partner MechaWolf add that they are not the best NWA tag champs, but the best tag champs of all time.  They’ll take the titles to Mexico to show they’re the best ever.  Should be interesting when they show up with the belts in AAA or The Crash or elsewhere.

Are you wishing (like me) that this show was sponsored by anyone other than BUSCH beer?  Well, Sorry…About Your Damn Luck!  But, here’s this match to make things better… 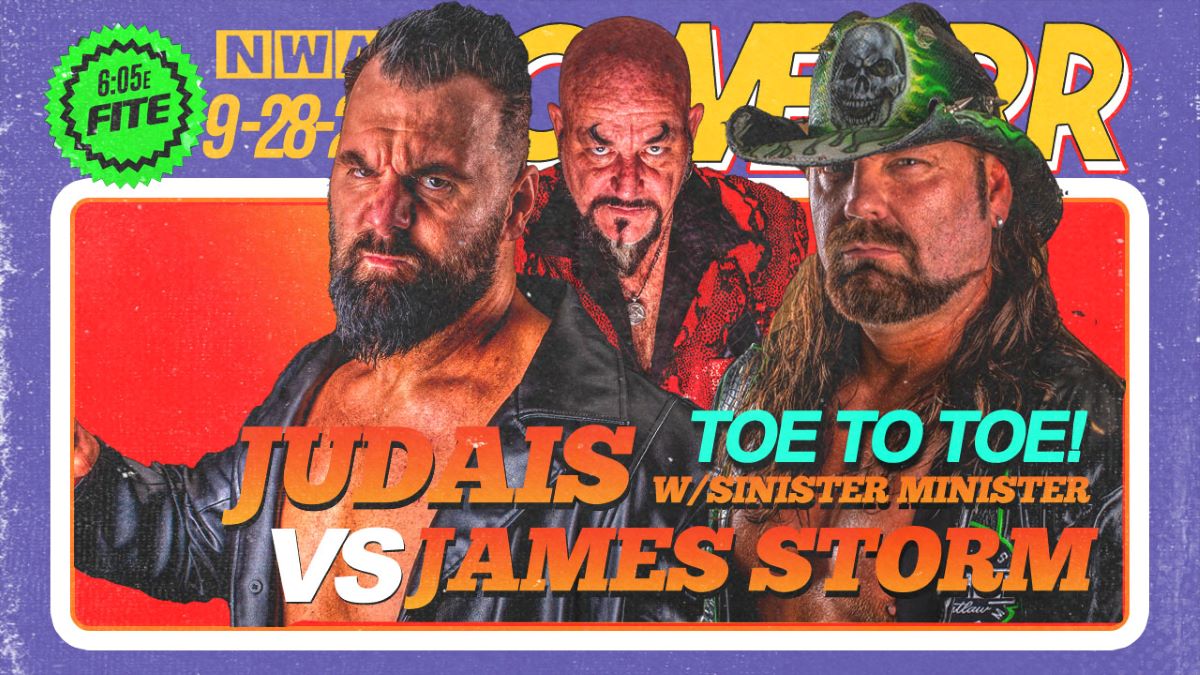 Judais (with The Sinister Minister) vs. James Storm

Not enough time to swallow a beer, when Judais pushes Storm to the corner, and works over the Cowboy.  However, Storm “Cowboys up” and goes up top to get a Ten Punch count for the fans.  The ref tries to insert himself to get the men to listen to him, but that ain’t happening.  He finally gives up and the ref and calls the match.  So this ends in…

“The match is over, but the physicality isn’t,” according to Galli, as both men keep wanting to fight.  The crowd wants them to keep going, and Judais wants more, but the Sinister Minister holds him back.  So, yeah, this match was a dud, and I hope the rubber match will be a NO-DQ.  Make it happen, Corgan!

But let’s get to The Main Event, which is… 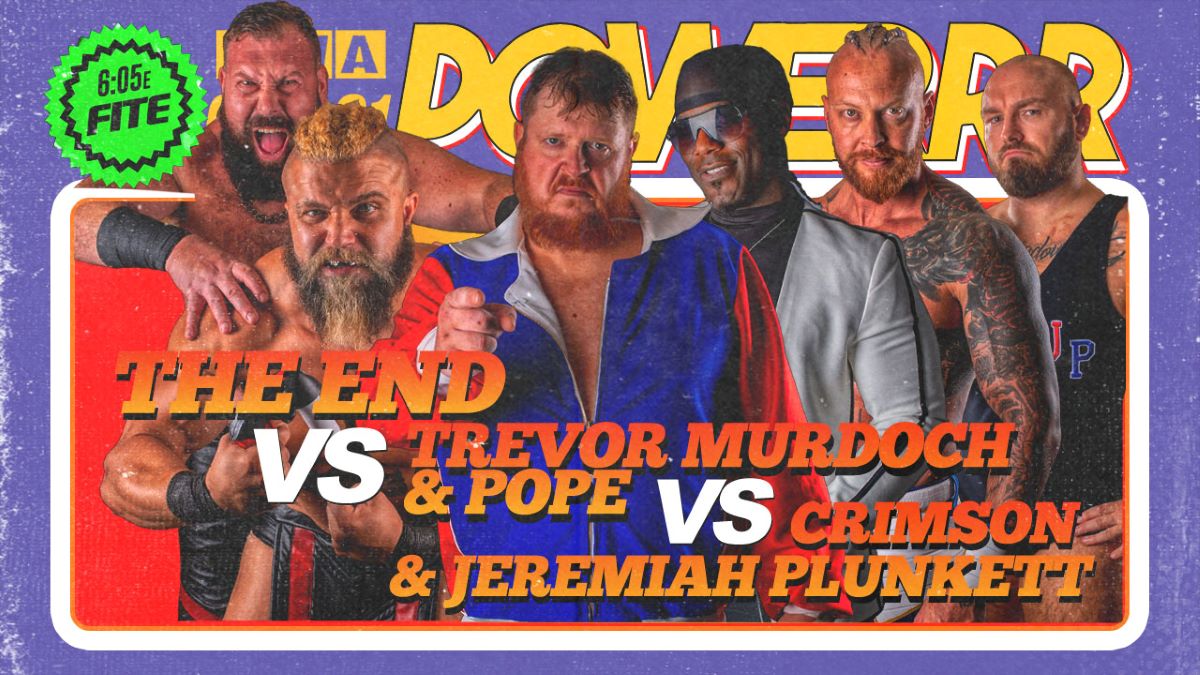 So it looks like three way rules apply in this match, and there is a lot going over, but here’s the big takeaways.  Murdoch, Parrow, and Plunkett start, but Murdoch and Plunkett work over Parrow and send him out.  With that out of the way, the champ works over Plunkett.  Murdoch goes up top and lands a bodypress to Plunkett to cover for a two count, but Murdoch starts favoring his knee, and he can’t put his weight on it.  Murdoch tags in Pope, but Plunkett also tags in Crimson and he nails Da Pope.  Crimson tags back to Plunkett, and Pope works over the Taterville, TN Titan.

It’s looking good *(you could even say “pimpin”), until Parrow drags Pope out to slam him to the guardrails.  Now Parrow gets OdinSon in the mix, and this is truly a Plunkett in Peril, as The End hit the signature fireman’s carry to a Parrow senton to Plunkett for a two count.  Pope comes back in gets The End out of the ring, but now before hitting the Elijah Express on Plunkett to get the win for both he and his tag partner, who is still gimpy.

While refs and backstage staff like Pat Kenney and Homicide come out to check on the champ, Jax Dane drags a ref to The Podium and wants to cash in his title shot he earned from The Champion Series, but Crimson cuts him off and knocks Dane loopy.  Davis then  gets back on the mic, saying the match isn’t going to happen, as fans start booing and Murdoch is completely flabbergasted by what just happened (or rather, didn’t happen).  Homicide walks to the back with the champ and we’ll hear more on his injury next week, as the show goes to credits

Nothing earth-shattering, but nothing soul-sucking either.  It just…is.  But it’s a show that keeping moving the angles along.

The two takeaways:  Aldis stopping his Strictly Business teammates, and Trevor Murdoch pulling up lame at the end, suggest some unique changes down the road, especially as Hard Times is coming up soon on December 4th.

But whatever the fallout from this show, we’ll see what takes place next week, so see you in Seven!