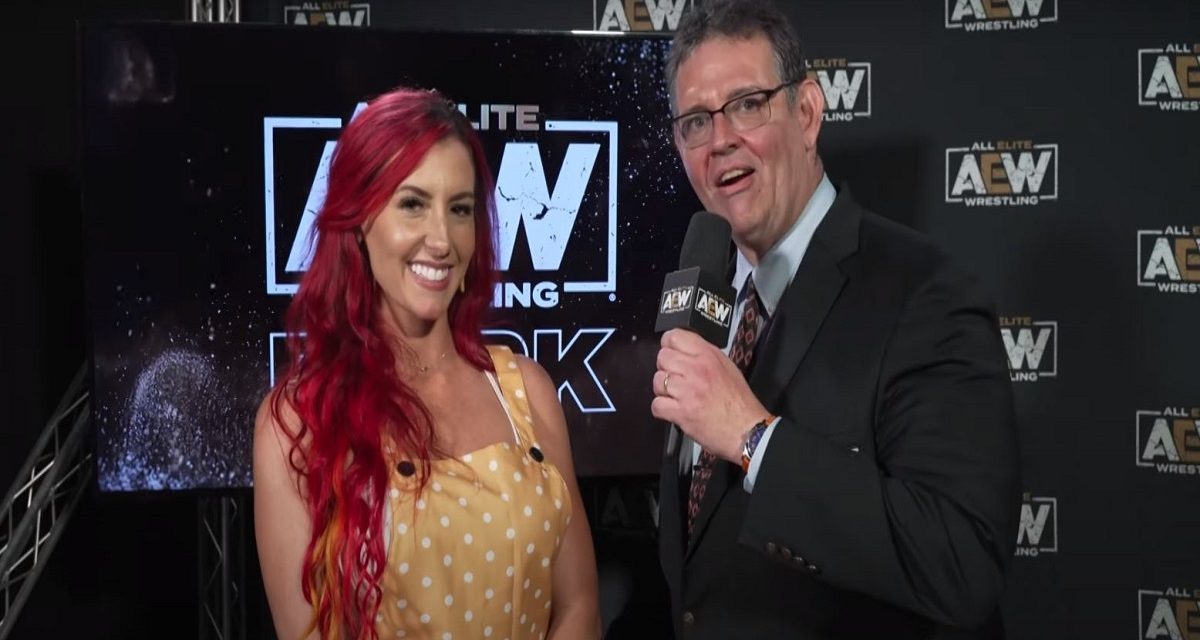 Hey Wrestling Peeps and welcome to the AEW Dark Elevation and Dark Recap for the week of September 27th.

This week’s shows were very short with Elevation clocking in at around 39 minutes and Dark clocking in at 1 hr and 12 minutes making both easy to watch.

Elevation only had 3 matches and the rest of the time was a lot of post and pre Grand Slam vignettes. This was taped at Arthur Ashe stadium which would explain why the show was so short given that Dynamite and Rampage were 4 hours combined. That said, this crowd was super into everything. Dark on the other hand had 11 matches, most of them being squashes but there were a few competitive matches. And while most of the matches were short, I thought they were all entertaining.

The ‘better’ show will depend on what you’re into. If you like storylines and promos, Elevation was definitely the better show but if you’re more into wrestling action, Dark was the way to go. Also, it was nice to see that Santana Garrett and Kiera Hogan have signed with the company. This is a definite plus for the women’s division.

From a match perspective, there wasn’t really one that stood out. The Dark Order’s and Paul Wight’s matches on Elevation were fun and I legit laughed out loud during Wight’s match. But…if I had to pick a match between both shows, I’d give the nod to Ricky Starks vs Darius Lockhart from Dark. It was much more competitive than I expected and Lockhart looked very good.

Lastly, if you’re into schtick, I’d highly recommend the Acclaimed/Tony Khan rap ‘battle’ (notice the quotes). It was highly entertaining!!

1. Thunder Rosa hit the Fire Thunder Driver to get the win over Kayla Sparks. Rosa got a huge pop and was very over with the New York crowd. This was Sparks’ AEW debut and she got some good heat when getting some offence on Rosa.

2. Alan ‘5’ Angels, Alex Reynolds, John Silver and Preson ‘10’ Vance beat Dean Alexander, Eric James, Kevin Tibbs and TJ Crawford when 10 used the full nelson to submit Kevin Tibbs. This was basically a showcase for the Dark Order with each member getting a bunch of offence in. John Silver definitely got the biggest reaction of the four.

3. Paul Wight won a handicapped match against CPA, RSP and VSK when he got a double chokeslam on VSK and CPA then pinned them both. During the match, the Gunn Club came out to the ramp to watch the match.

That was it from a wrestling perspective. The rest of the show was a number of post-match vignettes from the Dynamite show: These were:

The next set of promos were done prior to the Grand Slam Shows.

Prior to the action, Alex Marvez is interviewing Santana Garrett who has joined AEW. Diamante interrupts and challenges Garrett to a match next week. They start a brawl and the refs pull them apart.

We are joined by Excalibur and Taz on commentary

1. Thunder Rosa submitted Nikita Knight with the Peruvian Necktie. Knight was making her AEW debut. Rosa has been kept very strong in her matches on Dark and Dark Elevation and this match was no exception.

2. Mark Quen and Isiah Kassiday beat Carlie Bravo and JDX after hitting a Gin N Juice on Bravo to get the pin. Private Party has improved and you can see the Matt Hardy influence. They’ve also really leaned into their heel personas and even though they’re kinda lost in the shuffle, this is a team I really like.

3. Kiera Hogan hit a roundhouse kick to beat Leila Grey. Hogan (like Santana Garrett) has also signed with AEW and is a great addition to a women’s division that has gotten stronger by leaps and bounds over the last month…now if they would only give them some TV time.

5. Cezar Bononi and Adrian Jaoude beat Jake St. Patrick and Ryzin when Bononi hit a Spinning Olympic slam on Ryzin to get the win. Jaoude competed as a freestyle wrestler during the Pan Am games and has a Judo background. Also did I miss something or is Bononi no longer part of the Wingmen?

6. Lance Archer beat Arjun Singh after hitting the Blackout. Not surprisingly, this was a short squash match with Archer dominating the entire match.

7. Ricky Starks (w/ Hook) got the pin on Darius Lockhart after hitting a Spear to pick up the victory. Lockhart looked good in this match working Starks’ arm early and getting some offence later in the match including a high cross body for a two count. Starks looked great as usual.

8. Evil Uno and Stu Grayson (w/ Colt Cabana) beat Adrian Alanis and Liam Gray after getting the PK/Pile Driver combination on Gray for the pin. Stu Grayson was the workhorse in this match hitting a bunch of high powered offence as well as taking the beating from the heels.

9. Julia Hart (w/ Brian Pillman Jr and Griff Garrison) used the Splits Bulldog to get the win over Reka Tahaka. I know she’s getting a push as part of her team with the Blondes but IMO, Tahaka is the better wrestler and should have gotten the win.

10. Bear Bronson and Bear Boulder got the win over Brick Aldridge and Jameson Ryan after Bronson connected with a Running Cannonball to pin Ryan. Aldridge and Ryan are physically very impressive and got some offence in including a near pin on Boulder.

11. In the main event, Dante Martin and Matt Sydal got the victory over Aaron Solo and QT Marshall (w/ Nick Comotroto) after Dante hit Solo with the moonsault off the top rope to get the win for his team. This pairing of Sydal and Martin isn’t bad but makes me wonder what’s up with Dante’s brother Darius and when he’ll be back.

Before signing off, I wanted to let everyone know this is my last recap for SlamWrestling. I’d like to thank Greg Oliver and Bob Kapur for giving me the opportunity to write for Slam and I’d like to thank all of you for taking the time to read the recaps. If anyone is interested in taking on these recaps, feel free to contact Greg Oliver.

See y’all down the road.