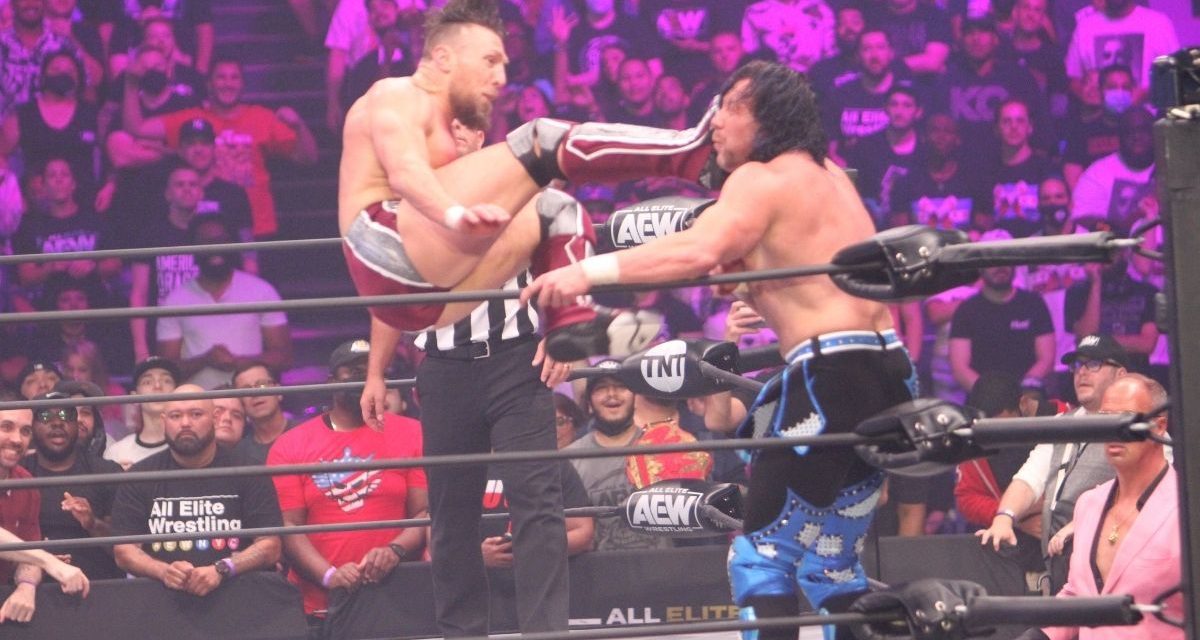 Ladies and germs, we’re about to see Kenny Omega and Bryan Danielson wrestle on free TV. Life isn’t always good, but sometimes it definitely is. It’s also worth mentioning that Sting is on the card as well, and the venue is a magnificent tennis stadium in the biggest city in the U.S. Pretty cool, no matter how you slice it. Let’s not talk about it then, let’s be about it: AEW Dynamite Grand Slam is live on TNT.

To quote a song from Hamilton, “OK, so we’re doing this.” I honestly did not think this would be the show-opening contest, but it makes sense when you hear the crowd reaction. Unlike, say, CM Punk, there should be no ring rust for Danielson, and indeed he is flying to the floor with a tope suicida in short order. The announcers mention Danielson hasn’t been in a match in 145 days, but again, that’s a far cry from seven years. Omega does a beautiful dive of his own over the ropes to the floor, but he ends up in a submission hold immediately after and has to wriggle to the ropes to break the hold. Tony Khan looks like he spent some money on a fancier ramp, but at least he gets his money’s worth as the two men take the battle there. The AEW Champion also makes good use of it, running its whole length to deliver a hellacious V-Trigger. A full nelson superplex by Omega is another memorable spot, though Danielson is able to counter the One-Winged Angel with a reverse hurricanrana. Danielson smokes Omega with a series of kicks and stomps to the face, looking for another submission hold. Both men land stiff strikes until the bell sounds to signify the time limit has expired. Danielson has the LeBell Lock hooked, but since the match is over, The Elite runs down to tend to their boss. The Young Bucks can’t help themselves, running over to kick Danielson, but Christian Cage and Jurassic Express prevent a full-fledged beatdown. 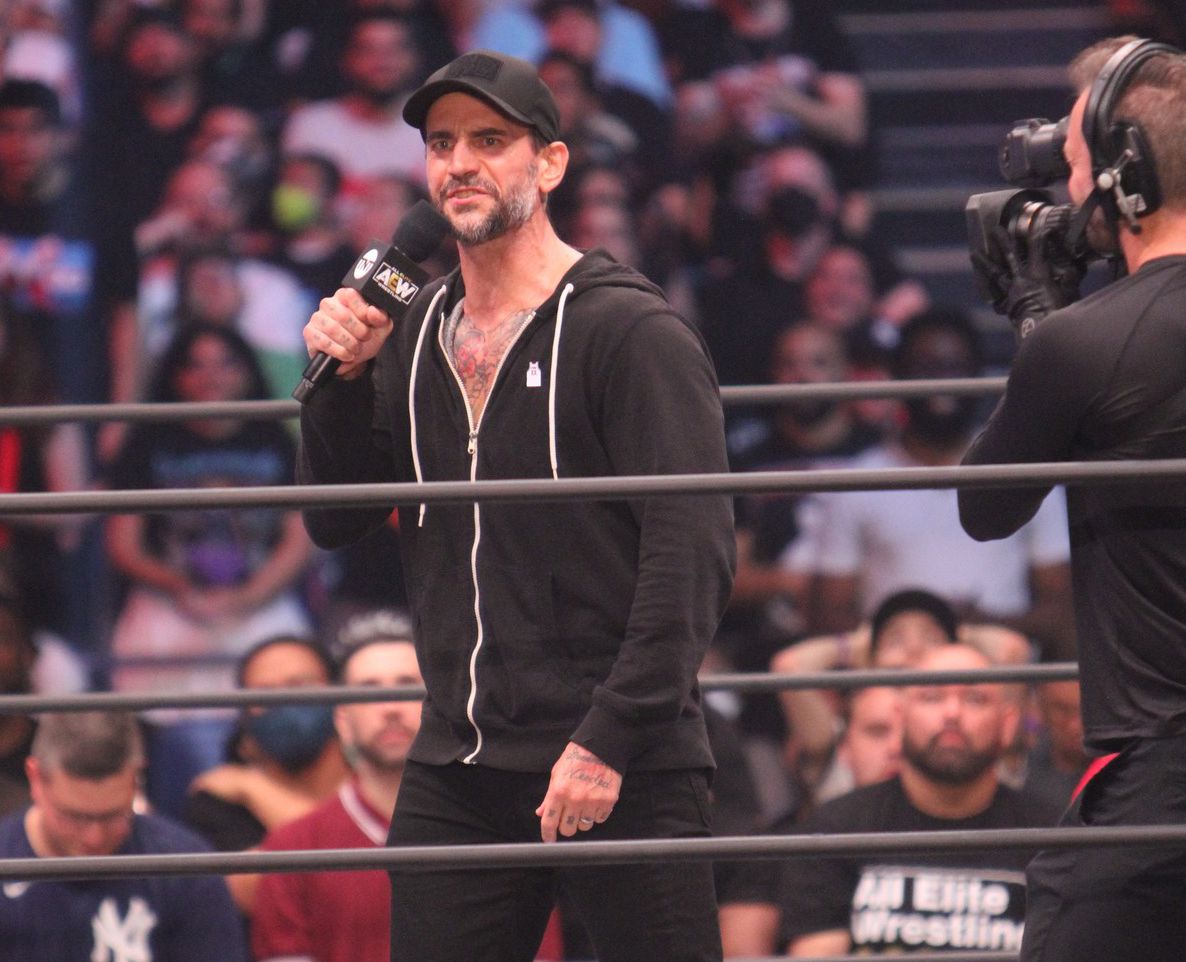 Is CM Punk as popular in New York City as Chicago? It definitely sounds like it. He has a lot to say about Team Taz, notably that they should have finished him off last week when they assaulted him. Saying Team Taz has slept on the legend of CM Punk, he notes that it’s not his job to wake them up. Rampage Grand Slam, Powerhouse Hobbs goes to sleep. Punk hugs actor and occasional pro wrestler Stephen Amell on his way back to the ramp.

Excalibur doesn’t always get the funniest lines at the announce table, but he starts off this match by saying “before we get too far into it, before we start burying MJF … ” Heh. I fully expect Pillman to be able to give as good as he gets for a while here, which is exactly what happens. MJF’s heel card is never in danger of being pulled, but it gets renewed here when he uses Hart as a human shield. Shortly after, he gets the Salt of the Earth locked in, and Pillman quickly taps. Good run for him, though.

Backstage, Alex Marvez talks to Chris Jericho and Jake Hager about the Rampage challenge they received from Men of the Year. Jericho has a colorful idea of what to do if Dan Lambert interferes, and aren’t scared at all if American Top Team’s MMA fighters want to get involved as well.

A friend and fellow wrestling journalist wonders on Twitter if Amell is going to get involved in this match since he and Rhodes are buddies, a notion I’m embarrassed I didn’t consider. Then again, with both Arn and Brandi at ringside, there are already plenty of other people in the mix. Rhodes sells a big kick on the floor to make it seem like he might be KOed, and later gets shoved into Anderson, who takes a bump off the apron. Just when it appears Cody has the upper hand, Black takes advantage of a ref bump to spit black mist in Cody’s eyes, rolling him up to steal a victory. 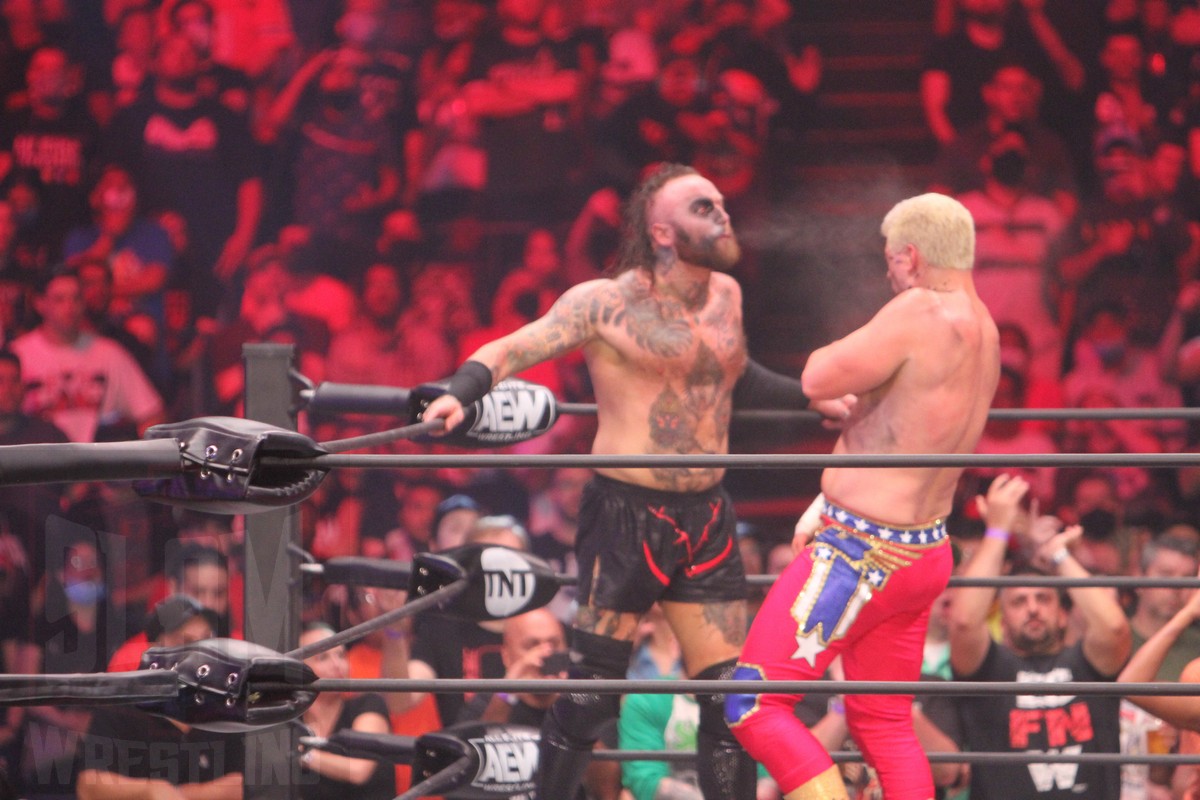 Sammy Guevara has some words for Miro, who has some slightly more disturbing words in response. The Spanish God vows to take the TNT Championship from Miro and celebrate by buying Fuego Del Sol a new car.

Allin is positioned as a homegrown star, and I’d agree: He, MJF and Orange Cassidy all qualify in my opinion. As for Sting, well, he’s living proof that old man strength is real. I can say that since I’m no spring chicken myself at this point. Even more impressive, he hits a cross body off the top rope that nearly wins it. You’ll believe a scorpion can fly. AEW, let this man get the ‘W’ too. That’s exactly how it goes down, with Allin hitting a Coffin Drop on the apron on Cash Wheeler while Dax Harwood suffers in the Scorpion Deathlock and has to tap out. 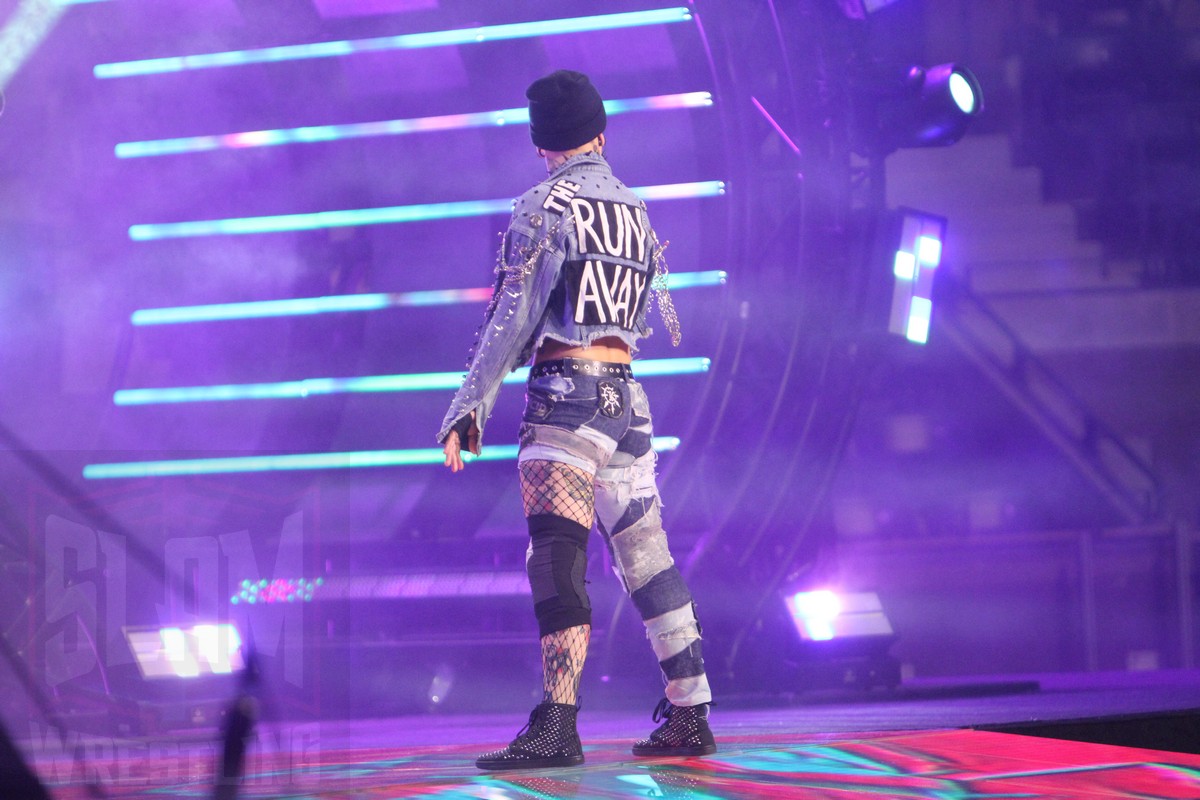 The fans are chanting for both competitors, which is logical since Baker has been the epitome of a cool heel champ and Soho is freshly arrived. Baker has both Rebel and Jamie Hayter in her corner, which works out well as they take the brunt of Soho’s dive to the floor. These two also mesh well stylistically, as they are both powerful and athletic. A huge air raid crash off the top turnbuckle looks like it might be it for Soho, but the challenger manages to kick out of that and several other near falls as well. Baker ends up in real trouble, but Hayter is able to guillotine Soho on the top rope while referee Aubrey Edwards is occupied with Rebel, and Baker is able to apply the Lockjaw to retain her gold. That was the right ending, with Baker still the champ but Soho looking awfully good in her first AEW match.

Don’t forget, AEW Rampage is two hours this Friday, and should also be excellent. See you in seven!

The amazing atmosphere and Danielson-Omega match alone were almost enough, but other matches on tonight’s card were also very good. There was basically no filler, so even though the idea of a “pay-per-view-caliber card” on free TV is often just hype, this really was. And if you liked what you saw, you only have to wait two nights to see more of it. I’d call that a win.