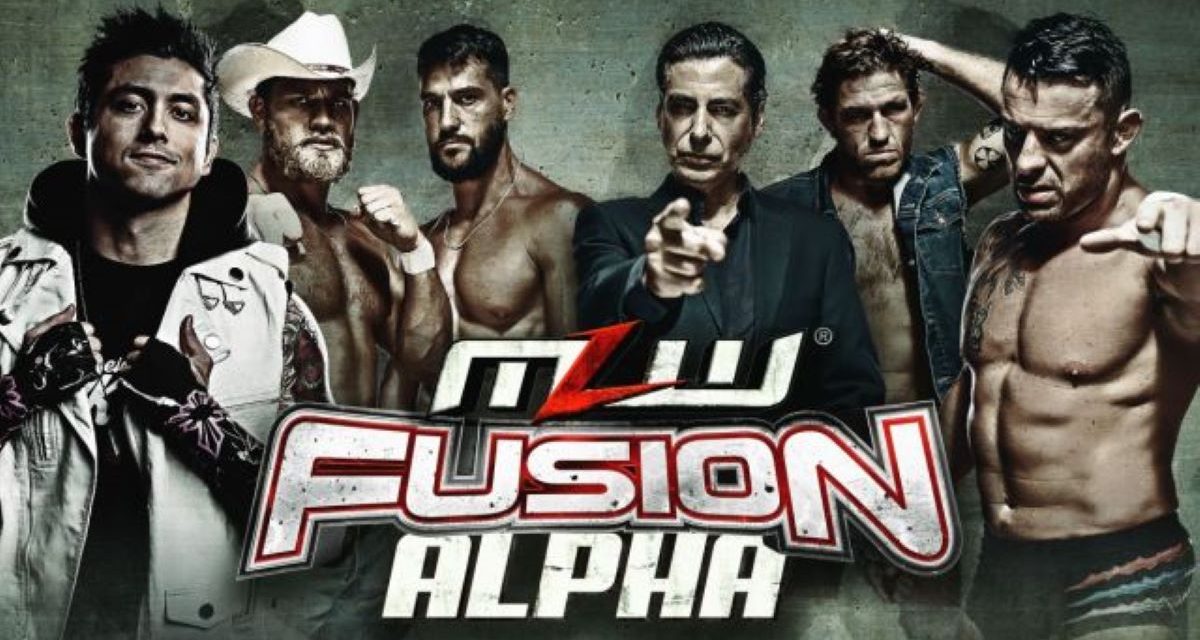 Welcome back to the Major League Wrestling Fusion ALPHA, and the show is going to be rockin’ with wrestling at the ECW Arena in Philadelphia, PA.  Rich Bocchini and fight analyst Saint Laurent have the call, but Cesar Duran cold opens the show and bids all of us believers a “buenas noches.”  Duran then runs down the events of the card, and says it’s a “Nueva era.  It’s an era of Azteca.  An Era of Violence.”

Gods, have I missed this Mexican jamon.  But let gets to the First Match of the night, which is a …

Lawlor gets the mic and says he’s been waiting 16 months to get in front of a crowd…but after looking at the Philly fans, it looks like he’ll still be waiting.  He rants that the fans don’t deserve to see Team Filthy, or the Opera Cup winner himself, and they’re gonna make short work of the Von Erichs.  With that, the strains of “Stranglehold” fill the hall, and the Von Erichs got their ass-kickin’ jeans on (Marshall has no footwear, naturally), and they take it to Team Filthy while the music blares on.  At one point, the Von Erich get their “estranged kin” Rip Von Erich up for a cutter, and Ross covers Rip, but Kevin Ku breaks the count.

From there, Ku isolates Marshall and stomps on his bad leg.  Outside, Team Filthy takes advantage of the bunkhouse plunder like a rebar or a wheelbarrow to knock down the Von Erichs. There is nothing pretty in this match.

Lawlor inserts himself to distract Marshall so that Ku can attack from behind, and he gets the Iron Claw for his trouble.  Ku gets the Von Erichs out of the ring, and more bunkhouse shenanigans continue, as Ku takes a shovel to Ross’s back and neck, and Rip uses the wheelbarrow to wrench Marshall’s bad knee further.  Now that they got Marshall right where they want him, Team Filthy sends Marshall back in the ring, and Rip isolates the bad leg and Ku hits a shovel on the bad knee.  Now Ross is in the ring, and Kevin Ku goes for a spinning kick at Ross, but misses.  Ross lands with an enzugiri and a twisting falcon arrow to cover for two.  Kevin Ku returns the receipt to Ross with a fisherman’s buster on two steel chairs and covers for a count of two.  Lawlor inserts himself again and now has a 2 x 4.  Ku has Ross in Position, but Ross dodges, and Lawlor cracks the wood in half on Ku’s head.  Now, Ross takes the same hunk of wood to take Team Filthy to the woodshed.  Best spot of the night has the Von Erichs lay Ku center of the ring and set up a wooden plank over him with two steel chairs, and then lay out Rip Von Erich, as Marshall hits a beautiful Moonsault and that gets the pin and the win.

Your Winner via Pinfall:  The Von Erichs

We go back to a recap of Battle Riot III, but you can read it here if you missed the action from July.

We go to TJP, who talks up his match with Davey Richards and points out he will win tonight.  Richards was a great wrestler, he points out, but he is a global trotting wrestler and a submission technician. TJP is going to look forward to tapping out the American Wolf.

Bocchini and St. Laurent talk up the new women’s featherweight division in MLW.  Among the names on the new roster are: The Sea Stars (Ashley Vox and Delmi Emo), Brittany Blake, Holidead, Zoey Skye, Willow Nightingale, and Nicole Savoy.

You've asked for it and it's finally here as we introduce you to the MLW Women's Featherweight Division. And here are some of the new faces you'll be seeing at MLW.#MLWFusion |
▶️ https://t.co/JIOBDlr6ez pic.twitter.com/17Tbzc2VVA

Back to Cesar Duran who addresses the “renegades (instead of “believers, huh?  Okay, who Cease and desisted that?), and Matt Cross steps up and wants a shot at the MLW Heavyweight title.  Duran will consider it, as his masked goon shoos him away.  That sounds fascinating, to say the least.

We then get word that Team Filthy and the Von Erichs are still brawling backstage, and it’s “The Interview Queen” Alicia Atout with updates and she gets word in her earpiece/Air Pod that Lawlor was escorted to Duran’s office.  More on that as it develops.  But now we head to the Next Match…

It’s the matchup of “El Intocable” versus “Staying Blessed.”  Both men are evenly matched, as a succession of quick pin, and a slap by Medina to Navarro is the international language of “I’m Not Impressed.”  Well, Navarro steps into high gear and sends Medina out of the ring, and then goes for a tope suicida with velocity.

Navarro goes up top to a double stomp, but Medina moves out and goes after Navarro, and Navarro tries to escape but Medina catches him and nails a high kick to the sternum, and a spinning kick to cover for a two count.  Navarro has a few more tricks with a tilt a whirl DDT that rocks Medina, but it’s still good for two.  Medina has had enough of this, and gets Navarro in what I can describe as a torture rack spun into an X-factor face buster.  Medina goes for the pin, and it ensures he is still untouchable.

We go to plugs for Fightland that will be on VICE TV October 7th, and the main event is Hammerstone vs. the current champion and member of Contra Unit, Jacob Fatu.  Before more can be said on that night, the feed interrupts and (surprise, surprise) it’s Josef Samael. Typical American arrogance, Samael says, in Hammerstone challenging Jacob Fatu.  He won’t get two titles, but will go home in a body bag.  Hail…Contra

Now for something different, we go to Davey Richards and the new chapter in his wrestling career.  He says he’s been to many promotions, and wants to test himself against the best.  Richards says it’s an honor to wrestle TJP, since they trained all those years ago and he helped him get his start in the business, but it’s Richards job to beat him.  So let’s the Hunt…Begin.

(Quick Aside:  If you remember the days of Lucha Underground, when they would have a cinematic moment with Duran (aka Dario Cueto) talking with a wrestler about the next match/title/feud, well this returns us back to those happier times.)

Duran is in his office, and Lawlor barges in the door.  Lawlor says he’s dealt with scumbag promoters, and that includes Dana White, and he wants what’s due to him.   Duran is happy with meeting him, and hugs him, much to Lawlor’s confusion.  Lawlor wants a title shot, and Duran grants it to him, when next week, it’s Lawlor…against Hammerstone for the MLW Openweight Championship.  That wasn’t what Lawlor wanted, but Duran escorts him out and gets back to his phone call.

What could that call be about?  Guess we’ll have to wait next week, because now St. Laurent goes over the Tale of The Tape…

Here's the tale of the tape for out #MLWFusion ALPHA main event as two world class competitors battle it out as @RichardsWesley goes one on one against @MegaTJP. #MLWFusion |
▶️ https://t.co/JIOBDl9vn1 pic.twitter.com/mcWTWxNzRX

Now let’s get to the Main Event… 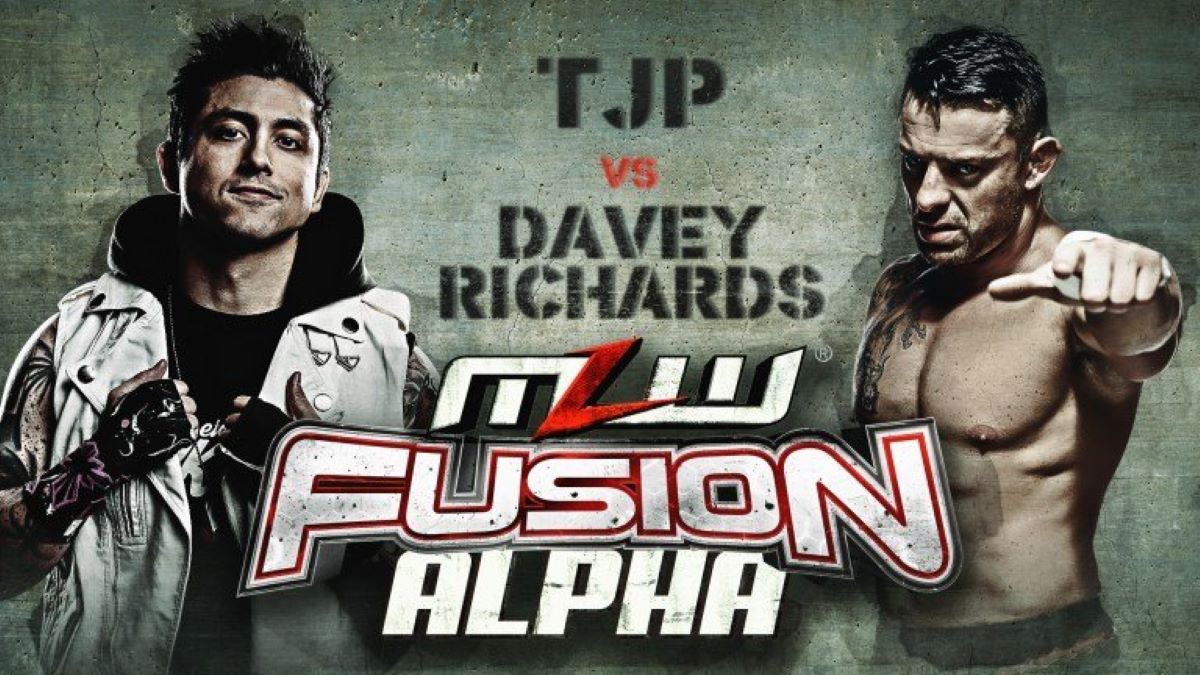 Huge pop for “The American Wolf” and he is laser focused.  There’s a stare down between the two grapplers, and chants of “Dave-y” fill the hall.  The bell rings and they lock up and both show their technical prowess, but neither has the advantage.  A headscissors takedown by TJP, and he salutes the fans with one finger (if ya catch my drift), but Richard reverses to his own headscisssors.  Both men are accomplished submission specialists, and each try to get the other man in a hold, but they still can’t cinch it in, as it is too early in the match.  Richards gets TJP and has him shoot the ropes, but TJP put on the brakes and hangs on.  Richard takes chase, but TJP ducks as Richards goes over the ropes.  TJP then slingshots himself to Richard on the floor.

TJP gets Richards back in the ring and shoots him to the ropes, and TJP nails him with a knee to the sternum, and a boot to the head.  It’s all TJP, with an abdominal stretch he tries to position to the Octopus Stretch that he likes to use, but Richards wriggles out.  TJP hits two suplexes to cover for a two count.  Up top goes TJP, but Richards heads him off, head butts TJP and superplexes to the floor.  Both men are exhausted, but they get back up and it’s a slugfest from both men.  A spinning heel kick and a German suplex with a bridge from Richards knocks down TJP to cover for a count of two.  TJP tries to take control, but Richards does a Victory roll and gets into position with an ankle lock, but TJP escapes.  Now Richards goes up top with a double stomp, misses, and TJP gets Richards in the corner with a facewash.  Back to submissions, but at this point, both men have been able to counter the others’ holds.  TJP gets Richards with a grapevine to a modified STF, but Richards grabs the ropes to break the hold.  On the apron edge, Richards lays in with his trademark stiff kicks to TJP to an exploder suplex on the apron edge.

Back in the ring, TJP is in prime position, and Richard goes for the kill by going up top for the double stomp for one, two…no. Richards has had it and goes to a brain buster and transitions to an ankle lock, and TJP taps.

More plugs for Fightland coming up on October 7th, as the show fades to black.

It’s only took two and a half months since Battle Riot III, but it’s great seeing MLW back again.  This was a great debut show, starting string with the Von Erichs/Team Filthy Feud and the cherry on top with Richards/TJP in the main event sealed the deal.

This really was a 3-star show, but the extra nudge goes to Cesar Duran, and his weasel-ness is perfect as the matchmaker for the show.  For fans of Lucha Underground, seeing those cinematic moments and Duran’s bluster will work perfectly with this “Culero” (Use Google Translate to figure what the word means).

With less than two weeks until Fightland, can this buildup deliver?  We’ll find out in the days ahead, so see you in seven!