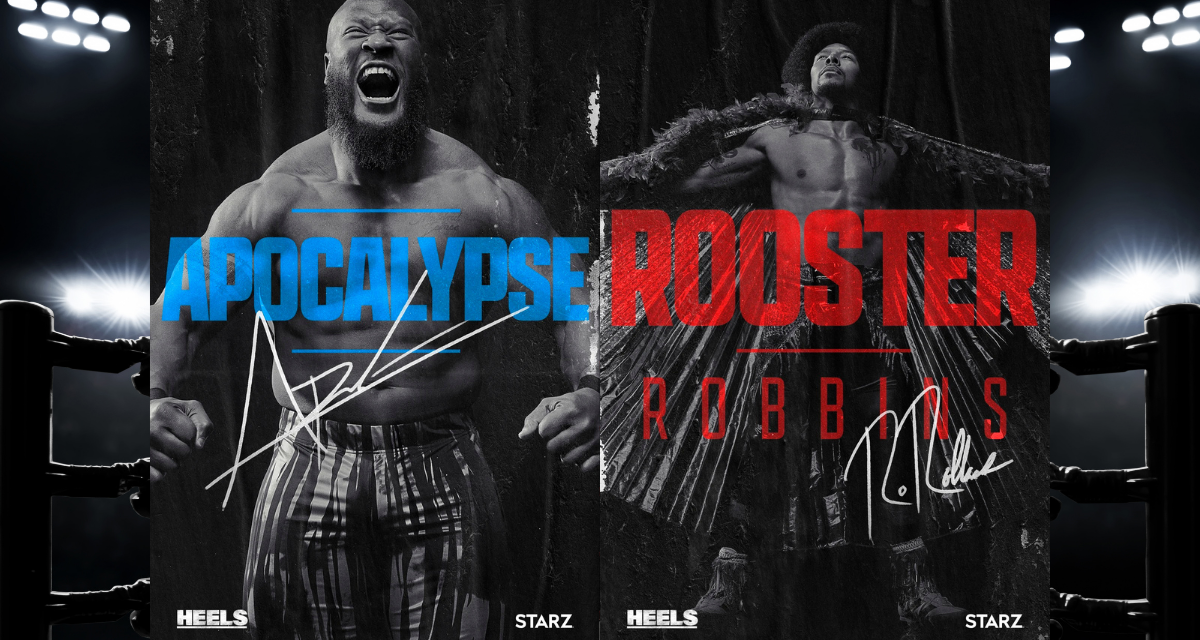 As the episodes for Heels roll along, the show allows more time for the supporting cast’s stories to unfold. Two of the mid-carders of the fictional Duffy Wrestling League that are emerging with intriguing stories of their own are Rooster and Apocalypse, played by Allen Maldonado and James Harrison, respectively. In speaking with the actors, Slam Wrestling learned about how their past experiences helped prepare them for the roles, and witnessed the natural, jovial chemistry between them in real life.

Both actors have a history of physical performance in their careers, though from different arenas. Maldonado portrayed a boxer in the 2019 TV movie Ringside, and credits that experience with preparing him for the in-ring action of Heels.

“Pulling from past experiences is always great,” he begins. “The training and the physique for the role was similar (to Ringside), but this one was definitely on another level. Learning how to wrestle, and I put on 20 pounds of muscle — say what, James?”

Maldonado pauses his answer to ask what Harrison had uttered quietly a moment ago, to which Harrison repeats “You’re welcome”, bringing a laugh out of Maldonado. “With the help of James, with the help of James,” Maldonado continues. “He’s so humble. But to be a wrestler, and to be able to take these bumps, you have to really take care of your body through these nine months of shooting that we did. By the time we got to the end, I was beat up and I needed a break.”

Harrison, meanwhile, was used to pounding his body for a living, having had a celebrated career as an NFL linebacker in which he was a five-time Pro Bowl selection and two-time Super Bowl champion with the Pittsburgh Steelers (XL and XLIII).

“I would say I relied heavily on my previous career, and the background of the actual training, to be able to go through the physical nature of learning how to wrestle and taking the bumps and bruises of wrestling, and doing the things that are necessary for the recovery process, so that you can go out there and do it again,” Harrison explains. “And you know, you didn’t risk being hurt or hurting someone else in the process of doing the stunts and learning the coordination.”

For Harrison, Heels represents an early successful casting in his relatively new, post-football acting career, and he takes Slam through how the pieces fell into place for him, perhaps just in time as he was evaluating whether acting was going to work out.

“It was sort of like my NFL career where I took some bumps and bruises, got cut, released, and so on,” Harrison says in describing the process of trying to land early roles. “I just got to a point where I determined it would be six months where I would give it all I had to try and get something. Within that time I got a call to come and do a read with (Heels producers) Mike (O’Malley) and Pete Segal and it just really launched from there.  Obviously it’s not that easy, hearing things from Allen, you know, guys that did the grind for years and years before they actually got a major break. I think I just did my grind of years and years in the NFL.”

As Harrison mentions, Maldonado’s acting experience is extensive, and he describes what made Rooster stand out as a role he wanted to pursue. “Everything kind of spoke to me in an artistic way,” he explains. “People have seen me in a lot of comedy roles as of late, so I wanted to get back to drama to show my range. On top of that, we’ve got incredible actors in an ensemble cast of just pure animals, when it comes to acting — everybody’s a beast, and I just love being in that type of environment. And then you get the athletic aspect of it as well, so it was just a win-win.”

Both actors take a moment to talk about the foundation that was laid out for their characters and what they themselves brought to the creation of Rooster and Apocalypse. “There wasn’t really any need to ad-lib — we really just stuck to the script because it was just great writing,” Harrison offers in terms of his performance.  “Over the course of (the producers) seeing our chemistry, our characters were written a little differently to give more of that chemistry on screen, but other than that, we basically stuck to the script.”

“I definitely had input in my wardrobe and costume,” Maldonado continues.  “Our incredible wardrobe stylist Laura (Bauer, whose husband Chris appears in the show as Wild Bill) set everybody up with some great costumes, but I tried to get my little two cents in. If you noticed, Rooster never wears matching socks. That’s just something personal that I do. So I gave the character little things like that.”

Harrison gets the last word as he addresses whether wrestling had ever been something he’d thought about, considering the rich history between football and the ring. “I know that I could do it, but I don’t have the desire to do it,” he answers matter-of-factly. “I put my body through enough physical punishment playing 15 years of NFL football, I have no desire to go through any more. I mean, I’ve already had six, seven surgeries. I’ve blown out my orbital bone, I had two back surgeries and nine days — it’s not something that I want to risk. I’ll take my chances on the big screen where I’m on with stunt coordinators, and we’re taking the least amount of risk, and getting it done as clean but as effective as possible.”

Stay tuned to Slam Wrestling for more interviews with the cast and crew, and reviews of each new episode of Heels.