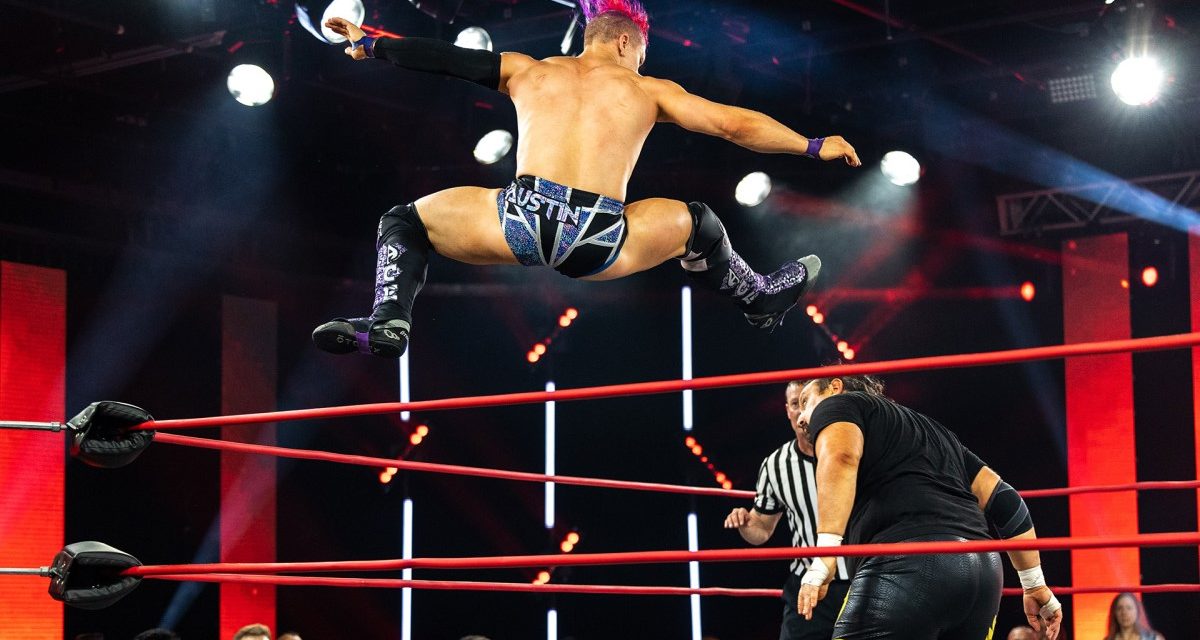 Today Gavin Hillhouse shall be reviewing IMPACT! Wrestling. This will be his second time watching the show, so there will most likely be some things he’s missing context for, but he will aim to write an enjoyable report on this week’s IMPACT! action!

The show starts off with an image tribute to “Daffney” Shannon Spruill. You can read Slam Wrestling’s obituary on her here.

Kaleb starts off against Rachel Ellering, which gets a “Rachel’s gonna kill you” chant out of the crowd. Rachel uses a clean wrestling takedown on Kaleb, and he runs away to the outside. He returns into the ring, and faces more of the same. He grabs Rachel’s hair and slams her to the ground, but Rachel dodges the following elbow drop before tossing Kaleb with a gutwrench suplex. She tags in Grace, and the two deliver a double suplex for 2. Grace attacks with a series of clubbing blows, but Kaleb dodges the last one.

Grace trips Kaleb into the ropes and hits him with a kick, but when she goes to the top rope, Rayne shoves her to the ground. Kaleb tags in Dashwood, who grabs Grace and brings her to her corner to tag in Rayne. Rayne delivers a snapmare and a kick, before locking in a chinlock. Grace stands up with Rayne still on her back and drops her to the ground. Grace looks for a tag, but Dashwoood interferes, dragging Grace to the enemy corner and tagging in Kaleb.

Grace hits both Dashwood and Rayne with a forearm before outmaneuvering Kaleb to tag in Wilde, who strikes with a hurricanrana and a running kick. She hits both of her other opponents with cheap shots before hitting Kaleb with a tornado DDT for a close 2. Wilde looks for a German Suplex on Kaleb, but Rayne reaches through the ropes and grabs Kaleb’s hands. Rachel comes in and kicks Rayne’s hands away, and Wilde hits the suplex to get the win.

Deonna Purazzo is interviewed about her attack on Mickie James at NWA 73. She says that she thinks her actions speak for themselves, and reminds everyone not to cross the king and queen.

Tommy Dreamer makes Christian Cage promise not to interfere in his match with Ace Austin tonight, because he wants to win it clean before he beats Christian for the Impact World Title at Victory Road.

One of the partiers in No Way’s conga line breaks off from the group and attacks Rosemary. She rips off her mask and reveals herself to be Tasha Steelz, and she gets Havok to chase her, allowing Savannah Evans to sneak attack Havok. Black Taurus chases the two off so the match can get underway.

Crazzy Steve starts off against Bahh, who goes for a punch, but Steve grabs his hand and attempts to bite it. Bahh wards him off with a headbutt and tags in No Way, and Steve tags in Black Taurus. Black Taurus strikes with a slingblade, before hitting a back elbow, clothesline, and enziguri combo in the corner. He continues the assault with an armbreaker for 2, before hitting a wicked slap. No Way covertly tags in Bahh, but Taurus doesn’t see it as he catches No Way with a sunset flip.

Bahh hits a splash on the distracted Black Taurus before biting his hand and tagging in No Way. The two deliver a splash/belly-to-belly suplex combo for 2, before No Way isolates Black Taurus in his corner. He tags in Bahh, who hits a hip attack. He tags No Way back in, who stomps Black Taurus and slams him to the ground. He continues the trend of quick tags, bringing in Bahh, who helps No Way hit an assisted leg drop for 2.

No Way comes back in and gets hit with a brutal slap and headbutt from Black Taurus. The two clothesline each other and then tag their partners. Crazzy Steve hits a bunch of clotheslines, but Bahh doesn’t go down. He rolls the big man up, but No Way breaks up the pin. Black Taurus tosses him out and dives over the ropes onto him. Bahh picks up Steve, but Steve escapes and scales the ropes, hitting the Jumping DDT to get the win.

I’ve never seen him wrestle before, but I have to say that Black Taurus is exceptional. He’s fast, strong, athletic, and overall a very exciting competitor.

W. Morrissey says that Sami Callihan made a big mistake attacking him with a baseball bat, but he has a little respect for Sami, because he admits he hates Eddie Edwards, in a company that Morrissey says is committed to pretending everyone likes everyone. Moose approaches him and agrees with him, saying that since they both have a problem with Sami and Eddie, they begin not a friendship, but an alliance.

Steve Maclin speaks to Petey Williams, saying that even though he’s called the Destroyer, he doesn’t know anything about true destruction, or the lengths he will go to. He says next week on Impact, they will face off, and there will be mayhem for all.

Moose comes out to the ring to talk about Eddie Edwards, saying it pisses him off that Eddie is trying to be a hero to the Impact crowd. He calls Eddie out, promising to show him that the hero doesn’t save the day in this story. Eddie brings out a kendo stick, but Moose catches his first swing. Eddie rains some fists down on Moose and hits him with the kendo stick, but W. Morrissey comes out and tosses Eddie into a spear from Moose. Moose does Morrissey a favor as well, tossing him into a boot from Morrissey. Morrissey crushes Eddie with a powerbomb, and Moose reiterates once more that the hero doesn’t win in this story.

No Way and Fallah Bahh, the latter of which sounds terrifyingly similar to Kevin Owens when he talks, promise that they had no idea that Tasha Steelz and Savannah Evans were going to attack Rosemary and Havok. No Way says he can’t keep track of everyone in his congo line. TJP about having a different tag partner this week, but Bahh defuses the situation. TJP says he’s cool with both Bahh and No Way, and he invites the both to Swinger’s Palace.

Eric Young promises Rhyno that he can cure the sickness in his veins, but he must suffer first, alone in the dark. I’ll be honest, this promo was rather interesting to watch with absolutely zero context.

Jake Crist answers the X-Division open challenge, and he and Josh go right at it, with Josh out-wrestling Jake to start the match. Josh attacks his opponent in the corner before catching him with a powerslam. Josh climbs the ropes, but Crist meets him up there with a superplex, before hitting a spinning reverse DDT for 2. Crist locks in a chinlock, and rakes Josh’s eyes for good measure. He spears the champ in the corner and hits him with a high kick for 2. He locks in the front chancery, and the crowd rallies behind Josh, who fights out of it and looks for a suplex.

Crist reverses it into a chop block, before attacking the right leg of Josh and going back to the eyes. Josh looks to gain some momentum with an uppercut and a back body drop, before delivering a running forearm and a hard kick. The champ delivers a series of picture perfect German Suplexes before hitting the C4 Spike to get the win and retain the X-Division Championship.

Josh Alexander is another talent I haven’t witnessed in action before. He’s incredibly impressive, just a perfect mix of pure power and technical prowess.

Brain Myers holds a very professional seminar, which is basically just him pushing around wrestling “newbies” and cutting them out of his seminar. He keeps around Manny Lemons and the very Outlandish Zicky Dice, saying he’ll see them next week.

Rohit Raju and Shera VS Matt Cardona and Chelsea Green

Raju starts off against Cardona, but immediately tags in Shera. Shera uses his power advantage to send Cardona across the ring with a pounce before slamming him and giving him an elbow drop. He tags in Raju, who immediately gets him with a facebuster and a slam from Cardona. He tags in Green, who attacks the left arm of Raju. He tags in Green, who hits a pump kick for 2. Raju pulls out the legs of Green and steps over her back, but when he tries to tag in Shera, he refuses, allowing Green to roll him up before walking on his back as well.

Green strikes with a headscissors and a hard slap. Shera comes in and looks right through Green, yelling at Cardona. Green slaps him and Cardona hits him with Radio Silence, but Raju comes in, tosses Cardona to the outside, and hits Green with a jumping knee strike to get the win.

Su Yung has a little vignette that I really did not understand due to my great lack of context, but trust me it was ominous.

The Impact Tag Team Champs, the Good Brothers, come out to address Willie Mack and Rich Swann. They say that the two should get a title shot, but Mack is too busy being in the hospital. Rich Swann comes out with a chair, fuming at the Good Brothers. The referee team comes out to defuse the brawl, but Rich gets in some good chair shots before they do. Scott D’Amore gives Rich a Bunkhouse Brawl match next week against Karl Anderson.

Ace Austin starts off the match by keeping Dreamer under his thumb with a series of holds, before slamming him to the mat by his hair. Dreamer rallies the Impact crowd and uses his own holds on Austin, before striking with jabs. Austin returns his own jabs, but Dreamer throws him with a hip toss and hits a bionic elbow. He clotheslines Austin over the ropes and tumbles over himself before slamming Austin into the ringpost. He hits him with some chops, but when he tries to toss him into the barricade, Dulton stops Austin’s momentum, and he hits Dreamer with a kick.

Austin distracts the ref, and Fulton drops Dreamer on the barricade. Austin goes outside and hits another kick before bringing Dreamer back into the ring and hitting him with a powerbomb for 2. Dreamer rallies with some punches, before catching Austin on the top rope and hitting a top rope neckbreaker. The two trade punches, with Dreamer getting the advantage with some clotheslines. Dreamer delivers a powerslam, but it’s not enough to get him the win. Austin attacks with a bicycle knee, but Dreamer returns with an enziguri.

Austin goes to the apron and hits an enziguri, before delivering a springboard Famouser for a close 2. Austin goes for the Fold, but Dreamer catches him with a cutter. Fulton pulls Austin’s leg to the ropes to save him from the pin, so Dreamer goes outside and gives him a DDT. Unfortunately for Dreamer, as he is re-entering the ring, Austin catches him with the Fold to get the win. Dreamer is unable to get to Victory Road, both figuratively and literally.

I very much enjoyed this show! I have no metric to say whether it’s better or worse than other IMPACT! shows, but it was objectively a good show. It had great matches, especially the Alexander/Crist match, and storylines that got me engaged regardless of my prior viewing history of the show.  The connections between AEW (whose shows I watch regularly) and IMPACT! already had me curious about this show, and after this episode, I’m only more interested!