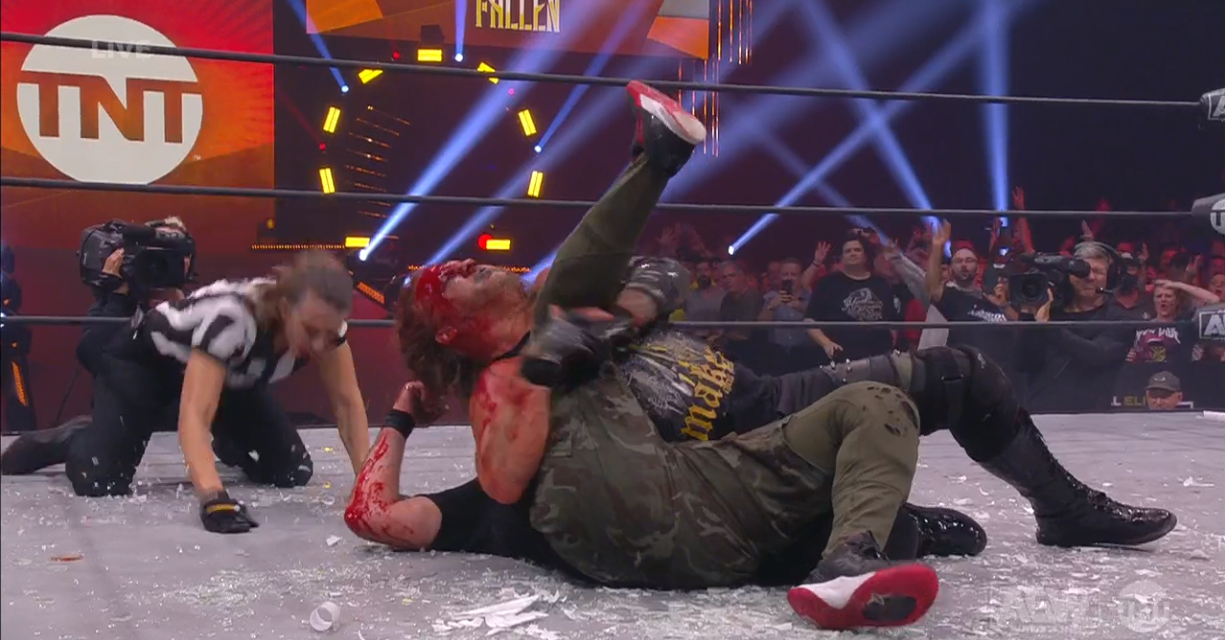 It’s Wednesday night and you know what that means. Nick Tylwalk brings the weekly AEW Dynamite report. Except for tonight. He’s on vacation and I have crossed company lines to bring all the action from Charlotte, North Carolina. It’s Fight for the Fallen, which is AEW’s annual charity show. Let’s get right to the action, which is the best thing about AEW.

So the Elite’s basketball starting line-up entrance was pretty cool. It was definitely better then Space Jam: A New Legacy. There’s a lot on the line tonight, if Team Dark Order wins the Dark Order gets a shot at the tag team titles, but if Team Elite wins; Adam Page will not get a shot at the AEW title.

Everyone hits the ring and the Dark Order hits four suplexes at the same time. Everyone goes to the floor and Alex Reynolds superplexes Nick Jackson onto everyone.  Back in the ring, Alex Reynolds takes a train of clothesline in the corner. The Dark Order returns the favor to Gallows. Reynold sends Gallows over the top rope, only to get rolled up by Anderson, who grabs a handful of tights to get the pin.

Evil Uno wants Anderson, who ends up getting surrounded by the Dark Order. He gets beaten down and Evil Uno covers for the pin.

Matt Jackson gets caught in the wrong corner. John Silver tosses him across the ring. We go to commercial.

After the break, Gallows is dumped out of the ring and Grayson takes out the Elite with a twister press from the apron. Gallows and Grayson fight into the crowd, but they were the legal men in the match and both get counted out.

Eliminated via count out: Doc Gallows and Stu Grayson

Evil Uno faces off with Kenny Omega. Unto with a head scissors and goes up top. Omega gets his knees up on the senton bomb. He follows with the V Trigger and hits the One Winged Angel and covers to get the pin.

John Silver fires out with a spear and then hits Matt Jackson with forearms. Jackson with a thumb to the eye to create some separation. Nick Jackson connects with a leg lariat as we go into another commercial.

During the break, Adam Page was power bombed into the ring apron and he is still down. John Silver with a near fall on Nick Jackson. Silver is outmanned and is pushed into a V Trigger from Omega. A basketball hoop is set up at ringside. Matt misses the dunk, but doesn’t miss his brother hitting a piledriver on Silver. The hit the BTE Trigger on Silver in the middle of the ring and get the pin.

It’s the Young Bucks and Kenny Omega taking on a lone Adam Page. The numbers are too much for Page as he falls victim to a super kick party. Omega hits a snapdragon, but Page kicks out. Nick Jackson with a draping 450 splash, but it’s still not enough for a pin. Page dodges the V Trigger and hits a lariat. The Young Bucks jump in, but Page fights them off. Adam goes up top, taking out all three men with a moonsault. In the ring, Page hits Omega with a powerbomb. Nick Jackson breaks the pin.

Page takes out the Young Bucks with the Buckshot Lariat. He covers Nick to get the pin.

Omega grabs his belt, but the ref is able to stop him. Page spike Omega into the mat, but it’s not enough. Nick distracts the ref, allowing Omega to blast Page with a belt, but Page still kicks out. Kenny hits two V Triggers and then the One Winged Angel and covers to get the pin on Page.

Alex Marvez is backstage with Pac, who is pretty upset that the Lucha Brother’s ride from the airport with intentionally messed with. Andrade and Chavo Guerrero interrupt, making it on time because they had a limo.

Taz introduces the new FTW Champion, Absolute Ricky Starks, who had a brass band play him to the ring. Starks gloats about getting rid of Brian Cage. He’s pretty salty that Cage never checked up on him after Starks broke his neck. Starks calls himself a team player. Brian Cage runs down to the ring and destroys the band. Starks tosses his flowers in Cage’s face and slips out of the ring.

Hiroshi Tanahashi is challenging the winner of tonight’s IWGP US title match.

Ortiz and Wheeler trade holds to start the match. Ortiz with a head lock. A shoulder tackle takes down Ortiz, but he is able to knock Wheeler out of the ring. Harwood and Santana tag in and trade blows in the middle of the ring. The two chop away at each other. Santana with the three amigos suplex. Wheeler runs in only to get a tandem power bomb.

After the break, Harwood can’t get the tag to Wheeler, who keeps getting attacked on the floor. Wheeler may be hurt, but Harwood is able to carry the team. Harwood with a superplex on Ortiz. He then hits a brain buster and covers Ortiz to get the win.

Britt Baker tells Tony Shciavone that even with a broken wrist she still beat Nyla Rose. Everyone who is holding their breath waiting for her to fail will suffocate.

AEW Rampage will take place on August 20 in Chicago for Rampage First Dance.

Darby Allin tells Alex Marvez that he will be in Chicago and be ready for anyone; even if it’s the best in the world. OOOOOOOOOHHHHHH!

Archer crushes Hikuleo in the corner and then strikes with mounted punches. Hikuleo counters with a power bomb out of the corner. Hikuleo with a powerslam. Archer gets to his feet, only to get dumped to the floor.

Cody Rhodes tries to speak with Alex Marvez about Malakai Black, but is attacked immediately by Black. The two fight out onto the stage. Black lands a massive kick and kneels over Cody.

No one has stepped up for Miro’s open challenge. He vows that no one will take his title from him.

JB dodges a splash, allowing Luchasaurus to tag in. He pummels Angelico in the corner, who grabs his two partners. Luchasaurus suplexes all three men. Luchasaurus tags in Cage, who hits Ques with a frogsplash to get the win.

After the match, Blade comes out of nowhere to take out Christian with a set of brass knucks.

John Moxley can’t get any answers out of New Japan. He has business in Japan, but all his calls are going unanswered. Moxley is willing to fight anyone in New Japan.

Chris Jericho the Painmaker vs. Nick Gage – No Disqualification Match – The Second Labor of Jericho

MJF joins the commentary team, complete with a bucket of popcorn.

Gage is armed with a pizza cutter to start the match. He swipes at and slices Jericho in the arm. The two throw hands in the middle of the ring. Gage with a spinebuster and then a knee in the corner. Gage follows Jericho to the floor, but Jericho sends him into the security barrier.

Gage cuts Jericho down on the top turnbuckle and hits a superplex. He brings Jericho to his feet and hits a Falcon Arrow. Jericho locks in the walls, but Gage is able to break free and runs Jericho into the ring post. Gage pulls out fluorescent light bulbs from under the ring. Jericho grabs his bat. Gage turn into a shot from the bat and takes another shot across the back. Gage dodges another shot and hits a choke breaker. He pulls out another pizza cutter, slicing Jericho across the forehead.

After the break, Gage sets up a pane of glass across two chairs. He lays Jericho underneath it and goes up top. Jericho cuts Gage off, hitting mounted punches and then hits a hurricanrana, sending Gage through the glass. Jericho has the Judas Effect blocked and is slammed into the broken glass. Gage smashes light tubes over Jericho’s head. He follows with a piledriver, but Jericho kicks out.

Gage grabs a broken light tube, stabbing Jericho in the head. He goes for more tubes. Jericho spits mist in the face of Gage and then smashes light tubes over his head. Jericho hits the Judas Effect and covers to get the win.

MJF is furious, telling Jericho to listen up. His next labor is to win a match with a maneuver off the top turnbuckle. As for his opponent, it’s someone that Jericho has referenced while making fun of MJF. He will face Juventud Guerrera.

Your rating on tonight’s Fight for the Fallen will vary depending on how you feel about death matches. I wouldn’t go out of my way to see one, but in a 10 to 15 minute burst I can handle it. The opening tag team elimination match was more fun than it had any right to be. AEW put on another solid show.