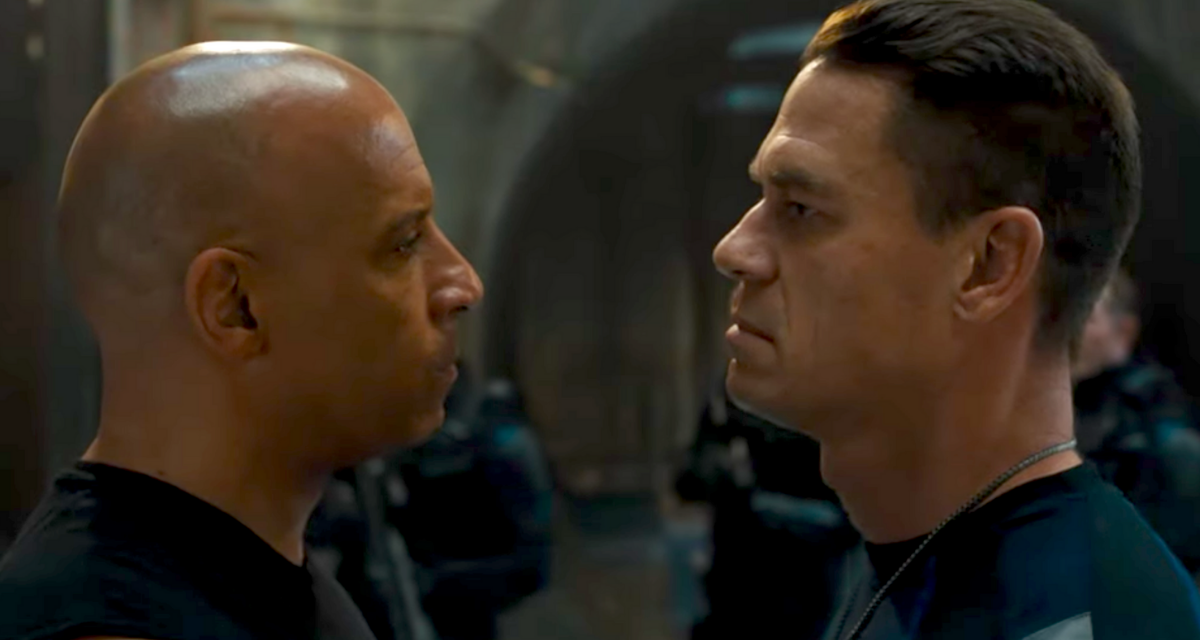 Oh Johnny Boy, where have the days gone? It’s so weird whenever I see John Cena on the big screen, or even in anything outside of a WWE ring. Cena and his WWE career will forever be intertwined, regardless of whatever he is involved in. Now, try sitting through a two-and-a-half hour movie where John Cena is supposed to be the “bad guy.” Yeah, it was tough.

The Fast and the Furious series has been going on strong for over 20 years! It’s not even about racing anymore, they turned it into a damn action blockbuster franchise. They really could’ve ended the whole thing a few movies back, but apparently there are an additional three movies planned, making the series a 12-part affair. That’s crazy. For F9, the series’ most recent instalment, we are introduced to a new villain named Jakob Toretto. That’s right, Dom Toretto has a little brother for some odd reason. It took nine movies to bring it up, but sure, that makes total sense. What better person to play lil’ Toretto than the Doctor of Thuganomics…. JOHN CENA!

But see, this movie didn’t sit right with me for a few reasons. One as I mentioned, the Fast and the Furious series has run its course (pun intended). There’s no need to keep this engine running, but the box office is pulling in great numbers, so why stop a cash cow? Second, the introduction of Cena’s character made absolutely no sense and now is the part where I go on a ramble — John Cena cannot be a serious bad guy.

Wrestling fans have wanted it for years, but every time they asked for it, Cena remained the WWE’s Superman. The Golden Boy. Mr. Untouchable. Aside from Cena’s early 2000s run as a heel, he’s been a hero for over 20 years. His heel run is memorable for some, but his longtime babyface run overshadows it by a mile. In almost all of Cena’s main roles in movies, he’s been the action hero. He’s played the good guy protagonist. Obviously, because he fits the prototype (pun intended again). But in F9, golly is he quite the poor villain.

Cena’s physique and sometimes frowning resting face made him look a little villainous. But man, Vin Diesel can be taken more seriously as the bad guy over Cena. Am I really supposed to believe that John Cena wants to take over the world and send it into a complete nuclear wasteland, simply because he had no love in his life? That was basically his intentions. It was so dumb in my opinion, and it didn’t help this still followed the same formula for every other F&F villains. In his scenes where he’s supposed to look all methodical and such, his poster boy looks and clean-cut hair definitely ruins it. Again, the bald and scruffy Vin Diesel looks way more villainous, I don’t know how many times I have to reiterate that. But, in the action and fight scenes, I’ll give it to Cena, he did great. Those were definitely my favorite parts of the movie.

It didn’t help that in the end, Cena got swerved by his other villainous buddies, and then he suddenly switched up and liked his brother again. Sure, let’s just forget you tried to literally kill your older brother multiple times, but since you were swindled, okay you get a pass. I mean seriously? Does this make any sense? Not to me. They just said yeah, the Torettos are fine again, let’s just get that thing destroyed before the whole world goes to bits. The thing that Cena captured! You have to see my frustration here, I was going nuts in the cinema. I mean what happens next, Cena is suddenly a good guy now? I don’t even know. The whole thing was a blur. F9, go see it if you want, but prepare to be confused and frustrated at times. It wasn’t terrible by any means, but even from an F&F fan, this series has to end for the sake of moviegoers everywhere. I didn’t even mention they went to space! But that’s a whole other rant.

All in all, Cena is a good action guy. Hell, he’s even a great comedy guy too. I loved Blockers, it had me rolling in tears. Anything Cena is in, I’ll watch. He’s always been one of my low-key favorites, as much as it would embarrass me to say. The guy is really talented. He’s truly becoming more of a transcendent figure in the entertainment world, much like the men before him, Dwayne “The Rock” Johnson and Dave Bautista.

But, please, Mr. Cena, no more serious, villainous roles! I know he’s set to be Peacekeeper in James Gunn’s The Suicide Squad and have his own series after that, but I think he’ll knock that role out of the park in comparison to his role as Jakob Toretto. He fits the Peacekeeper role, as there are still comedic elements to it and it’s not as serious. I’m really looking forward to seeing it.

It’s also nice to see Cena back in the squared circle. I know a lot of people have been waiting for Cena to go away, especially back in his Super Cena days, but a year-and-a-half hiatus really makes you miss him. That’s definitely why he got such a positive reaction at MITB, the WWE fans miss what they despised all those years. I can’t wait to see him against Roman Reigns at Summerslam. Here’s hoping the match tops their previous No Mercy 2017 meeting, and that match was already solid.

At least I know this, the days of bad guy Jakob Toretto is over. He’ll probably be back for the last couple movies and end up joining his brother’s squad. Oh Johnny Boy, I knew you were frustrated with the WWE Universe at times, but I didn’t know you would go as far as to destroy the actual universe!