‘Heels’ creators and stars share their experiences through Comic-Con @Home 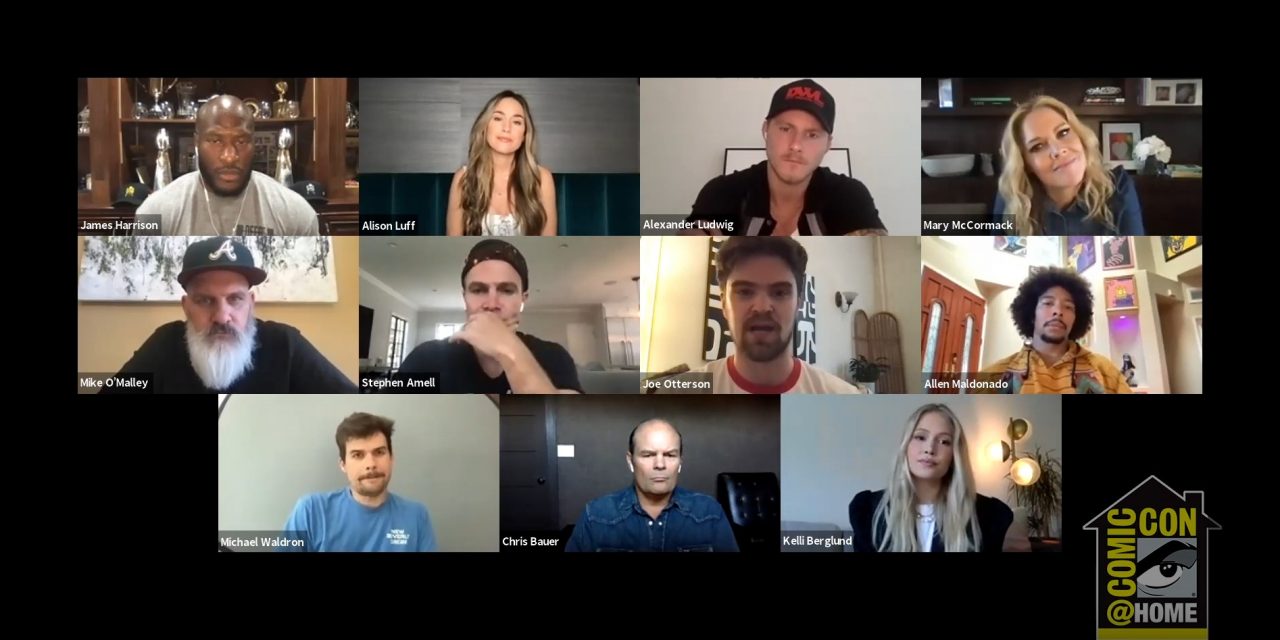 In-person events are taking more and more baby steps back towards normalcy — but sometimes there are baby steps backwards, too. The San Diego Comic-Con is once again offering a virtual experience this year, with conference call panels eschewing the traditional big rooms full of fans. Slam Wrestling’s attention, naturally, was on the panel focused on the upcoming show Heels, starring sometimes-wrestler Stephen Amell and premiering on Starz this August 15th.

Hosted by Vanity Fair writer Joe Otterson, who sported the always-classic red and white “Hot Rod” t-shirt, the panel gathered producers Michael Waldron (also the creator) and Mike O’Malley, along with cast members James Harrison, Alison Luff, Chris Bauer, Alexander Ludwig, Mary McCormack, Allen Maldonado, and Kelli Berglund. Otterson gave everyone something to comment on, so there was insight into the show’s production from everyone throughout the nearly 40 minutes of run-time.

Heels focuses on the relationship between brothers Jack and Ace Spade (Amell and Ludwig, respectively) as they try and continue the legacy of the Duffy Wrestling League, a Georgia-based promotion that had been run by their late father.

Although the cast and producers were admittedly all over the map in terms of their history with wrestling, to a person they all acknowledged the respect they have for the business, with Ludwig specifically commenting that it was important for the team to do justice to the physicality of the wrestling world. McCormack, whose character of Willie is a backstage shot-caller, said that while her previous exposure to wrestling was just her brother doing a Superfly Splash onto her from the top bunk, her “in” to the show was the characters and relationships. She likened it to watching the Friday Night Lights TV series, as she didn’t have to care about football (and she didn’t) to become engrossed in that show.

Of course, there are some heavyweight wrestling fans on the panel, too. Otterson’s first question was meant to find out who was the biggest wrestling fan before starting work on the show, though he partnered that question with “And why is it Stephen?” as Amell raised his hands in an obvious gesture and everyone else had a laugh. As detailed in this earlier preview story on Slam Wrestling, Amell’s connections to pro wrestling are deep. Sporting a t-shirt advertising his Nocking Point Vineyards, Amell appeared quite content to take a backseat for most questions, and even happier to heap praise upon his cast and crewmates. He did, however, refer somewhat playfully to the back injury he suffered during filming that, along with COVID-19, disrupted the show’s shooting schedule.

The second-biggest fan turned into a contest between Waldron (“I really wanted to be a wrestler, but I unfortunately am not built like one”), Maldonado (“It was me living out every 8-year-old’s fantasy”) and Bauer, who specified that he is a wrestling fan, but more so of regional wrestling promotions. Both Bauer and Maldonado scored the biggest points for creeping slightly into character and doing a little promo work during the interviews. Maldonado probably won with his arrogant proclamations that had everyone breaking into laughter.

Luff, playing Jack’s wife Stacey, and Bergland, in the role of Ace’s valet/romantic interest Crystal, both answer to the role they play in supporting those in-ring wrestlers. Bergland seemed intrigued by the idea that her character may want to get into the ring herself, as she is in awe of the physicality of the in-ring character work. Luff enjoyed playing her character’s struggle of watching Jack do what he loves, but possibly to the detriment of the family that’s trying to keep everything together on top of running the promotion. Ludwig pointed to his favorite part of the writing, that in the show “nobody is right and nobody is wrong, they’re all living in the grey area.”

Otterson wrapped things up by asking who among the cast and crew would choose to be a heel and who would want to be a face, and the overwhelming response was to be bad guys. Amell specifically pointed out that he may love the rush of being booed more than he should. Waldron had an interesting answer, in that he would be a face for the sole purpose of engineering a crushing heel turn. He was answering a follow-up question about the greatest heel turn of all time, which he says has to be Hulk Hogan at Hallowe’en Havoc, when the time ran out on the panel. How fitting when discussing a WCW pay-per-view.

The video of the panel was available earlier on the Comic-Con’s YouTube page, but it was later removed. It will be added to this article if it becomes available again.

Stay tuned to Slam Wrestling for coverage of Heels leading up its premiere and for reviews of the shows as they air.