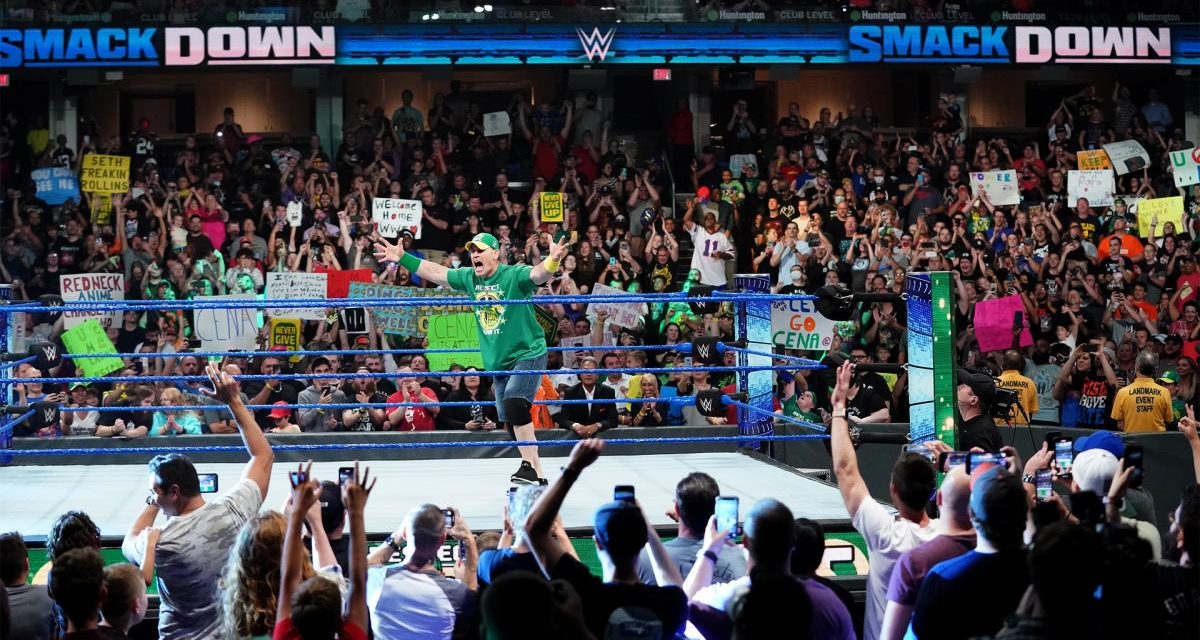 Featuring a match for the SmackDown Women’s Championship, this July 23rd SmackDown hosts the debut of a WWE Superstar!

John Cena comes out to start off the show, and he’s met with nothing but cheers, which was frankly very surprising. He says that he’s come back to challenge Roman Reigns at SummerSlam, and he says that everyone’s excited because they’re only a few minutes away from seeing him and Roman face to face.

He says SmackDown with Roman as champ sucks, and he asks everyone whose team they’re on. That question is met with mostly Cena chants, and a little booing. He asks everyone if they’re on team jorts or team cargo pants, which gets him more cheers than his name did. He asks where Roman even is, and he asks the fans to help him get Roman out to the ring. They cheer, which I don’t know how that’s supposed to help.

Roman doesn’t come out, even after Cena says please, but Paul Heyman does make his entrance. He tells Cena he has it all wrong, Roman can see him, but he can’t hear him, because Cena isn’t worth Roman listening to. He promises Cena that Roman will come out to talk to him tonight, before making his exit while singing Cena’s theme terribly and hilariously.

Sami locks in a wristlock that he uses to control Balor, but Balor grabs a wristlock of his own. Sami hits him with a punch and rakes his eyes on the ropes before beating Balor down. Balor rolls to the outside, and Sami follows him out there and hits him with a brutal right hand before bringing him back into the ring. Balor fights back, taking it to Sami with right hands before dumping him out of the ring. He dives out of the ring onto Sami with a Swanton as we go to commercial. 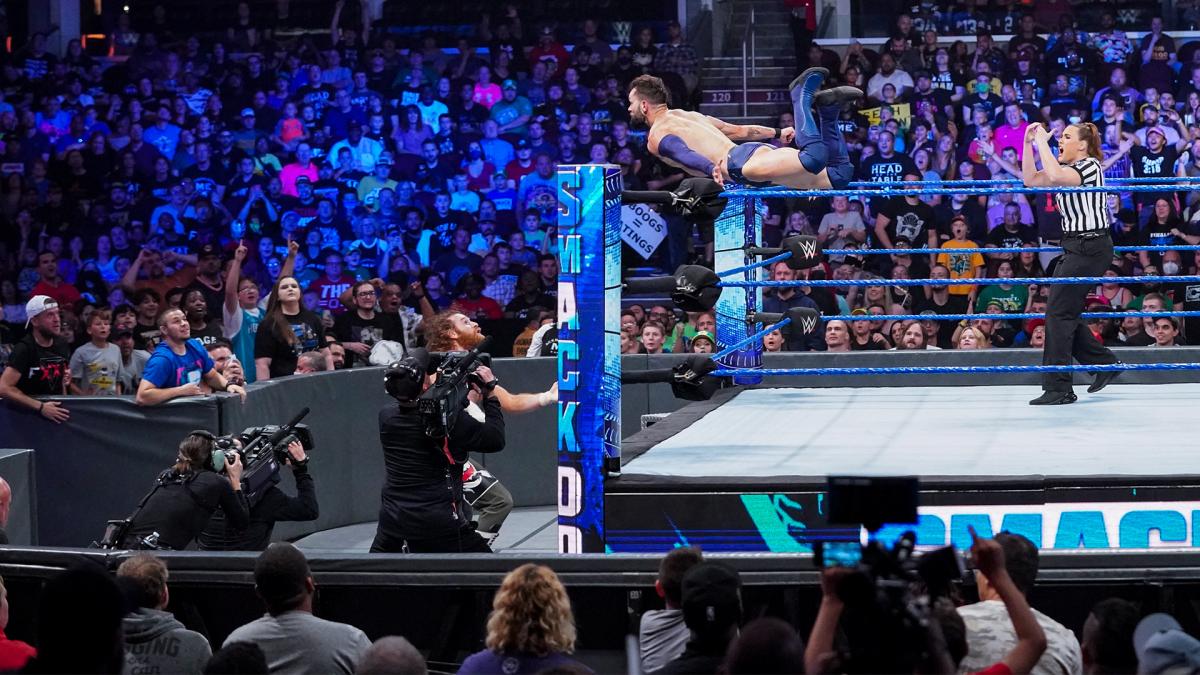 Very glad to see that Finn hasn’t lost the aggressive side to his wrestling that he re-introduced in NXT. Photo: WWE

When we come back, Sami is hitting Balor with a brutal clothesline for 2. Sami locks in a chinlock. Balor fights back with a kick, but Sami puts him right on the top of his head with a DDT. Sami looks for the Helluva Kick, but Balor catches him with a slingblade that puts him right on his neck. The Prince tries for a Shotgun Dropkick, but Sami catches him with a Blue Thunder Bomb for a close 2.

With the crowd fully behind Balor, Sami goes for an exploder suplex in the corner, but Balor spears him into the corner before stomping on his gut. He delivers a couple Shotgun Dropkicks before scaling the ropes and delivering a sickening Coup de Grace to get the win.

Kayla Braxton interviews a desolate Baron Corbin, who’s really not looking too good. He lost money making his crowdfunding site, because the guy who made the site stole his identity. He sadly wonders what happened to him before walking away.

Mr. Money in the Bank Big E makes his entrance. He’s met with a resounding “you deserve it” chant, which Big E says he appreciates. He barely gets a word in before Apollo Crews, with Commander Azeez, comes out to mock him. Apollo is in turn interrupted by Dolph Ziggler and Robert Roode. And THEY are interrupted in the best way possible, by a rocking solo from Rick Boogs that announces the arrival of King Nakamura. Cesaro comes out as well, and the ring gets crowded pretty quick. Everyone begins brawling, and Big E, Cesaro, and Nakamura work to toss Azeez out of the ring. Cesaro also swings Apollo around a few times for good measure.

This match takes place at the Rolling Loud music festival, where Wale introduces the Street Profits. Otis grabs the leg of Dawkins, allowing Chad to get the advantage with an ax handle. Dawkins strikes with a flying back elbow, a dropkick, and the Silencer. 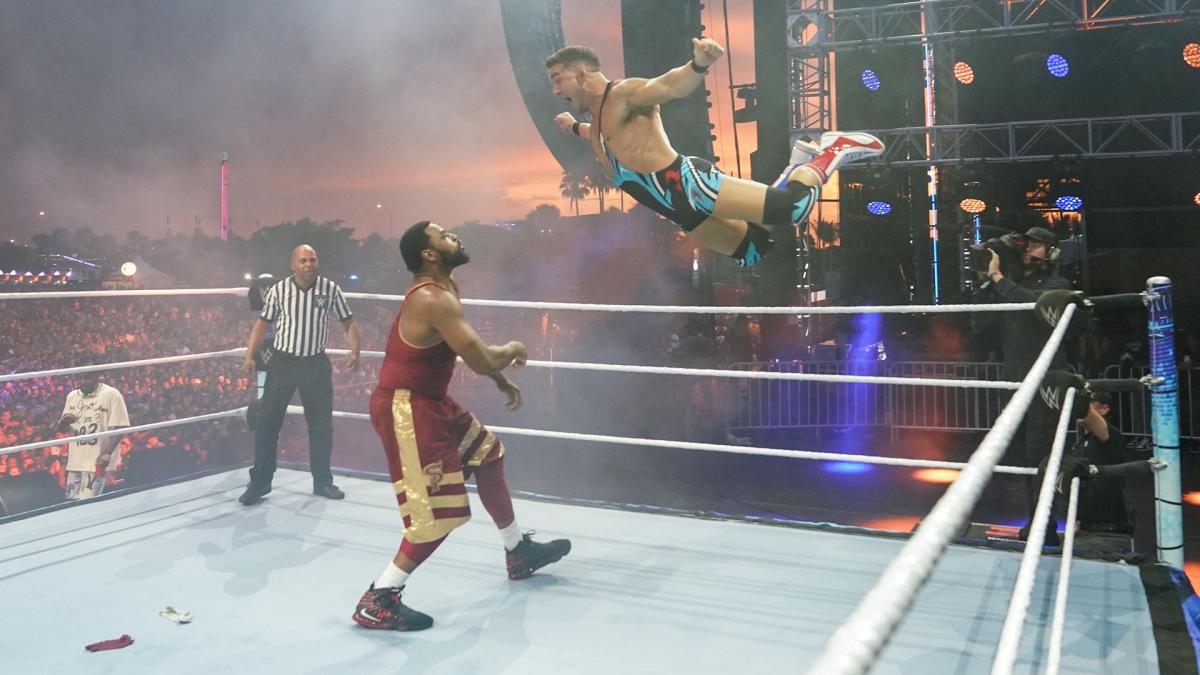 Chad grabs the advantage by attacking the throat of Dawkins, before locking in an armlock on the injured shoulder of Dawkins over the top rope. The former Olympian continues the assault on the left arm of Dawkins, before delivering a German suplex for 2. Chad goes for a moonsault, but Dawkins dodges it and hits a clothesline. Chad strikes with a rolling kick, but Dawkins returns the favor with a straight right hand. Chad rolls Dawkins up for 2, and Dawkins catches him with the Anointment to pick up the win.

This match takes place at the Rolling Loud music festival. Carmella yanks Belair down to the ground by her hair, but Bianca gets right back up and taunts Carmella before hitting her with a dropkick. Carmella strikes with a headscissors, before avoiding a K.O.D attempt by sliding to the apron. Belair follows her there, so Carmella rips her to the apron by her hair once more. 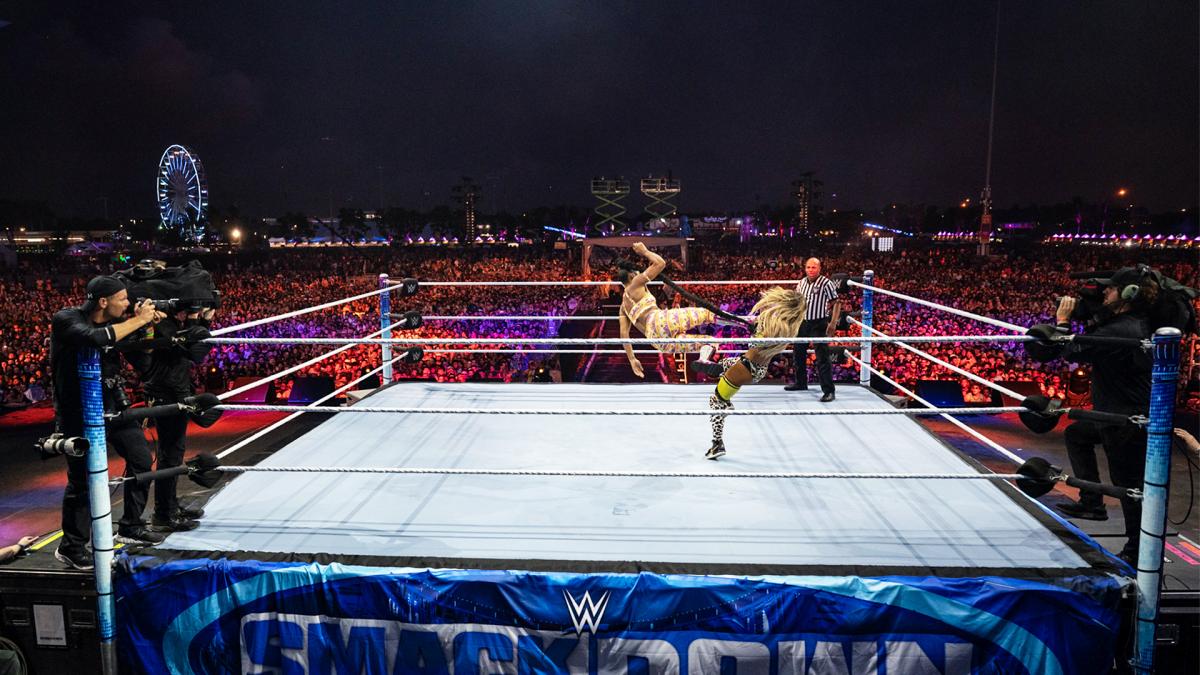 It is just so weird to see live crowds again. Photo: WWE

Baron Corbin approaches Kevin Owens, who’s helping Shotzi Blackheart and Teagan Nox fix their tank. Corbin tries to apologise, Owens tells him he should expect that nobody wants to help him, since he’s been a jerk for 8 years. Corbin pleads for help, so Owens gives him 40 bucks. Unfortunately, Blackheart’s tank chooses that time to work, and Corbin gets shot in a very sensitive area. Even worse, The Dirty Dogs come over and take the cash Owens gave Corbin, and Owens chases them off with a chair.

Edge comes out to address the WWE Universe, saying that everyone knows how hard he fought to get back to wrestling. He says that he should be standing here as the Universal Champion, but he’s not, because of Seth Rollins. He says that Seth has opened Pandora’s Box, reminding Seth that he’s been in the Brood and the Ministry of Darkness. Seth Rollins makes his entrance. The Messiah is all smiles, and he laughs at Edge. The Rated R Superstar tells him to shut up and to come down to the ring, and that he promises not to hit him.

Seth gladly obliges, and says he was going to talk about how much he hates people like Edge and John Cena, who just come back whenever they want and jump the line to title shots, when in fact Seth deserves it. But the more he thought about it, he’s glad that Edge is back, so he can destroy him. Edge says he lied about not attacking him, and beats the Messiah down. Seth fights back with kicks, but Edge hits him with Edge-cution. He looks for a spear, but Seth escapes outside of the ring. 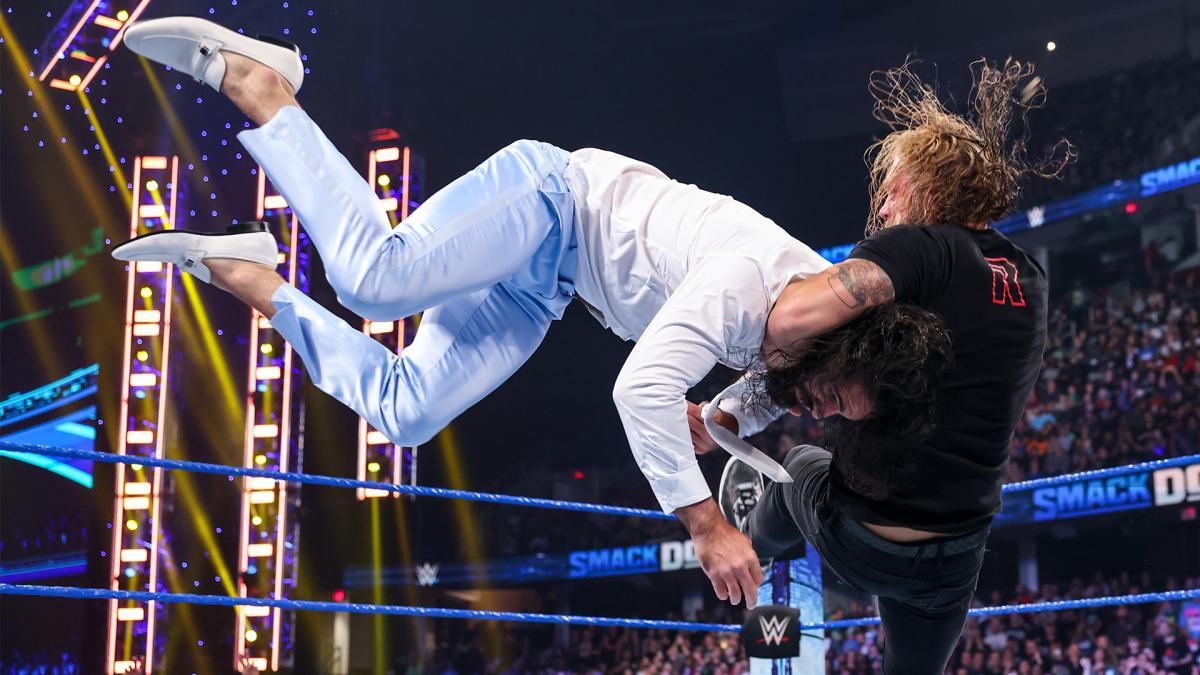 Vega starts off with a strong kick, but Toni takes it without missing a beat and delivers her own kick. Toni hits a sliding clothesline, but Vega takes her outside and bounces her off the announce table. She brings Toni back into the ring and hits a brutal knee for 2, but when she goes for a Tornado DDT, Toni reverses it into a sickening headbutt.

Storm delivers a running hip attack and a German Suplex for 2, before looking for Storm Zero, but Vega reverses it into a Sunset Flip Powerbomb. The two repeatedly reverse waistlocks, with Storm getting the advantage and delivering the Storm One Cutter to pick up her first SmackDown victory.

Dominik goes right for Jimmy, beating him down in the corner. He continues the attack with a dropkick, but when he goes for a springboard arm drag, Jimmy knocks him off the ropes and hits a superkick. He whips Dominik into the opposite corner and pins him for 2, before choking him on the bottom rope.

Jimmy delivers an enziguiri for another 2, before locking in a headlock. Dominik fights back with a kick and he sets him up for the 619, but Jey pulls Jimmy to safety. Rey dives off the apron and crashes onto Jey with a Seated Senton, and Dominik flies onto Jimmy with a crossbody as we go to commercial. 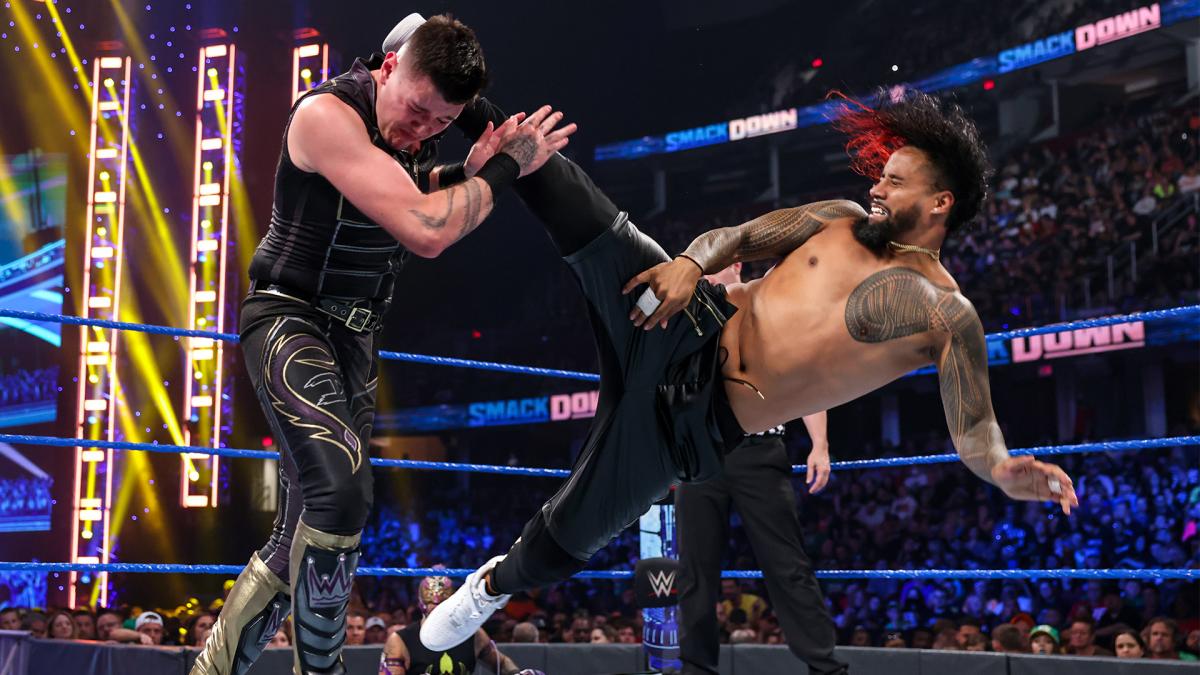 Jimmy Uso with an enziguiri to Dominik Mysterio Photo: WWE

When we come back, Dominik is in control, hitting a neckbreaker and a swanton bomb. He looks for the Three Amigos, but Jimmy interrupts him with an enziguiri. Dominik sets up and hits the 619, but when he goes for the Frog Splash, Jimmy catches him with a Superkick for 2. Dominik hits Jey with a wrecking ball dropkick, but Jimmy rolls him up, and Jey assists him in the pin to get him the win.

Roman Reigns comes out as promised to address the challenge made by John Cena earlier tonight. He says that John Cena is nothing but a nostalgia act, and he’s just doing the same things that he always has. He says he’s not excited by the same old Cena, and that he doesn’t want to see him, especially at SummerSlam. He says his answer to Cena’s challenge is no.

Finn Balor makes his entrance, and Roman asks him to acknowledge him.  Finn denies him that, and says that maybe since he’s not interested in John Cena’s challenge, he’ll be interested in his challenge. The crowd chants “Roman’s scared,” and to prove them wrong, Roman accepts Finn Balor’s challenge.

A fully satisfactory show. The matches at the Rolling Loud music festival were cool, but it was a little tragic to see how the crowd there clearly wasn’t that into the matches. Wrestling’s not for everyone, I suppose.