NWA POWERRRSurge: Classics, Coifs, and Up and Comers Galore 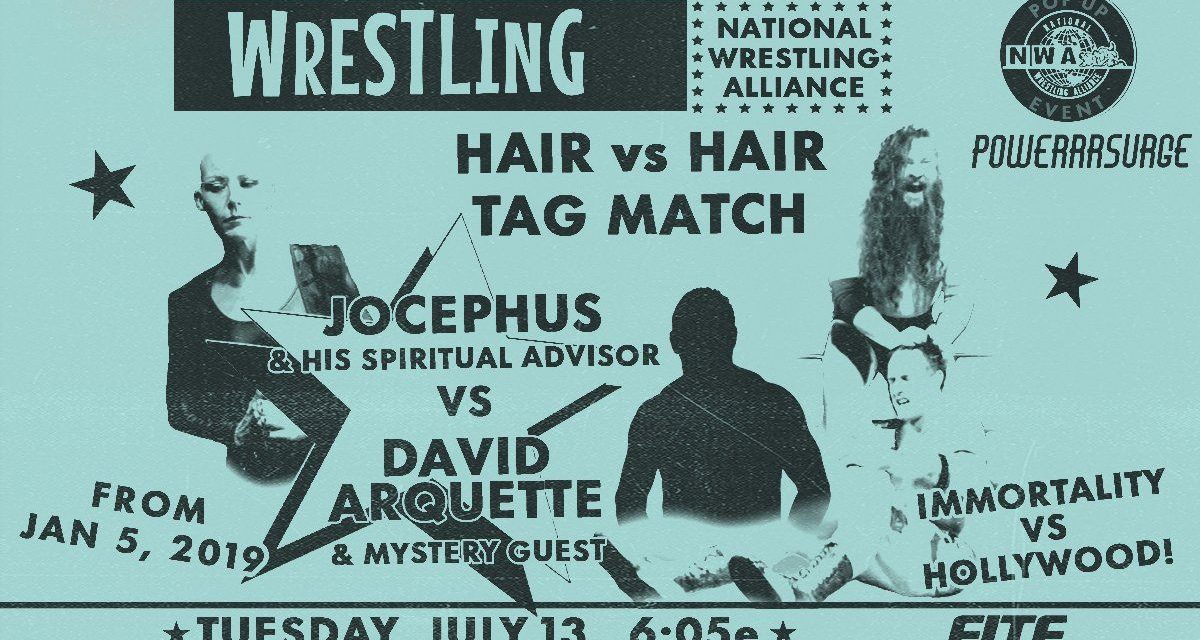 This time, you do not get to step Into The Fire.  No Cyr-ee.  This is where the NWA has a POWERRRSurge of talent looking to make a big name for themselves, while recognizing just how far they have come since restarting the brand.  Tonight will have two matches, plus a revisit of a classic match featuring David Arquette against the late, great Josephus (aka Joseph Hudson aka The Question Mark) in a hair versus hair match.

First, a confession on my part.  Since covering the NWA for SLAM! Wrestling, I have not seen any point to cover POWERRRSurge, because to-date they recapped the action that had occurred previously on POWERRR, and there’s no reason to recap a recap show, in my opinion.  So why now?  Good question.  This show has a different feel than previous POWERRRSurges, and this feels like it can showcase the future of the promotion, while giving a tip of the hat to the past.

Before we get into that, the NWA held a press conference at The Chase in St Louis, MO.  If you missed it, you can catch up here:

Not a whole lot here, but the announcement of St. Louis’ own Tootie Lynn (aka Seishin) as the first entrant in the NWA Women’s Invitational for the EMPOWERRR PPV on August 28th looks to be a good fit.  I’m sure more will come in the weeks ahead, and the announcement of a rematch between Nick Aldis and Trevor Murdoch this July 24th will keep the fans happy.

But for now, we have Joe Galli introducing us to the matches of the evening from the GPB Studios in Atlanta, GA, so let’s go to… 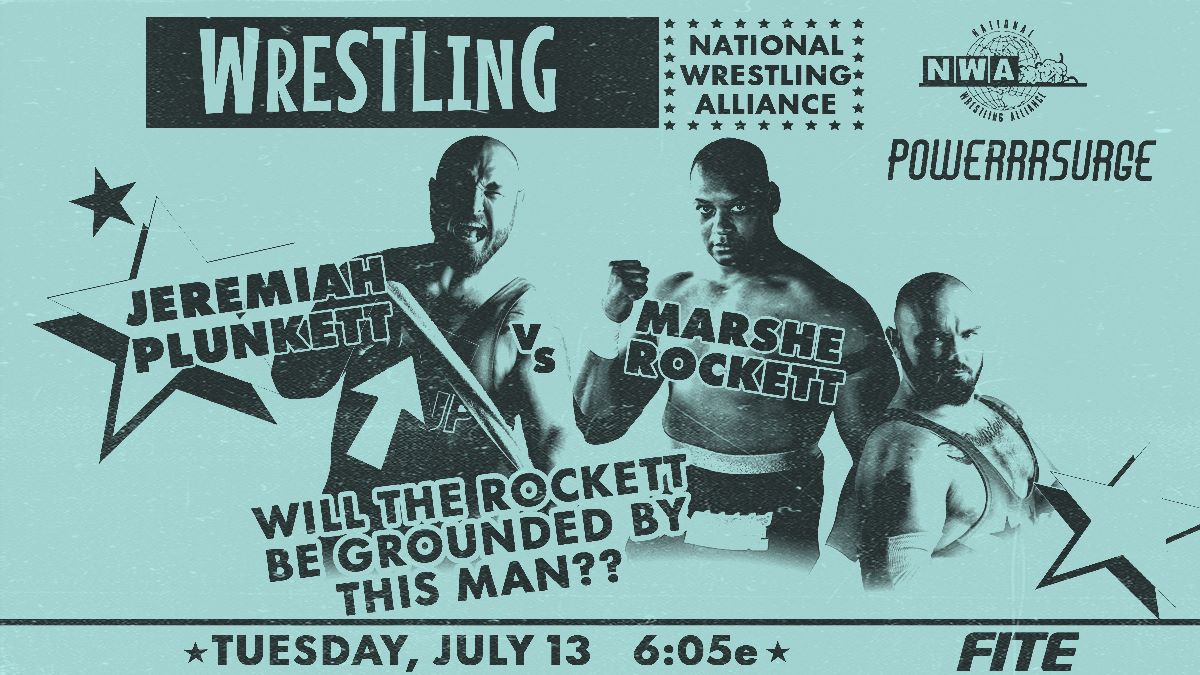 Chants of “Tater Peeler” fill the GPB Studios as they get directed to the native son of Tatertown, TN, Jeremiah Plunkett.  Start of the match has Rockett on the receiving end of an aggressive Plunkett.  Bog move of the night was Plunkett with an Arn Anderson-esque spinebuster to Rockett for a cover of two.  Plunkett goes for a big forearm, but he misses the target and Rockett gets in his licks, including a power slam for a two count.  Plunkett goes again for a forearm, but Rockett manages to reverse it into a cutter for the pin, and the win

Your Winner via Pinfall:  “All Day” Marshe Rockett

We get clips from a press conference two years ago, when the NWA hosted a pop up event in Clarkston, TN for New Year’s Clash, and David Arquette talks about his love of the wrestling business and doing things right, when Josephus comes in to interrupt.  You can rewatch it here: 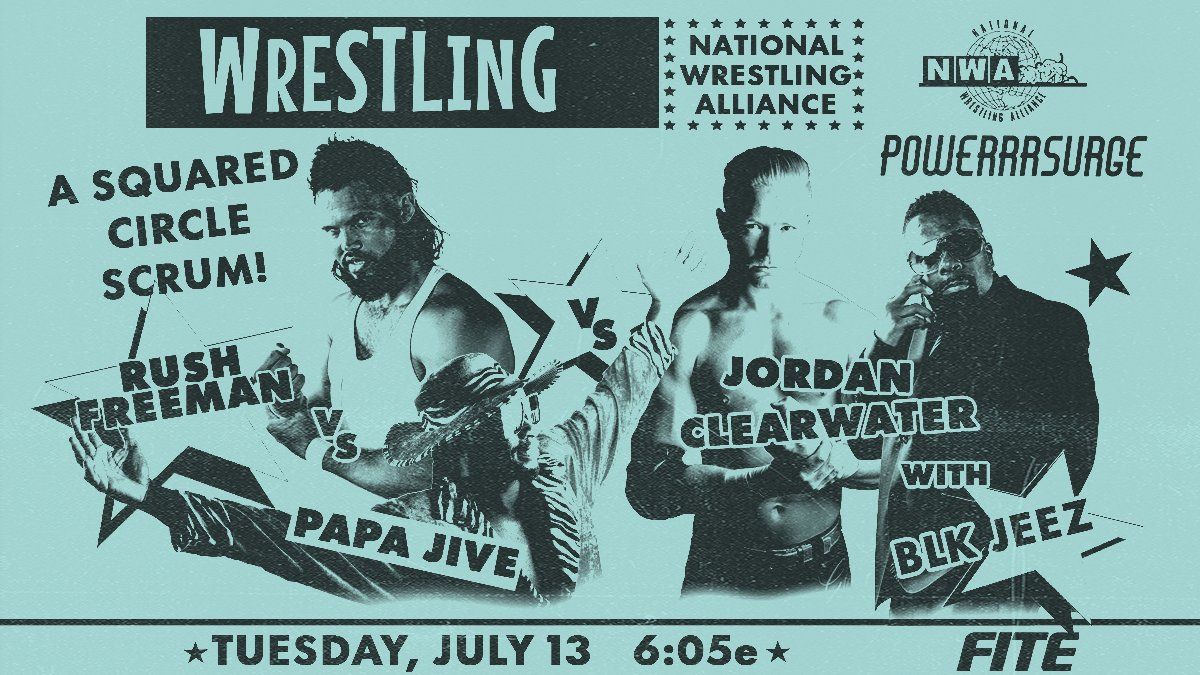 For those of you not familiar with the first two individuals, here is my take:  Jive strikes me as the second coming of Da Pope, and Freeman has a magnificent mullet and build that I can only describe as a mid-sized “Diesel” (but not quite “Big Sexy”, if you will).  In any case, match has Jive and Clearwater work together to take Freeman out of the equation and out of the ring.  Once that’s done, Clearwater slams Jive for a count of two.

Clearwater is the workhorse of the match, but Jive and Freeman are no slouches, either.   Big move of the match has Jive up the top rope deliver a fist drop to a prone Freeman that had some of his knee clip the mid-sized “Diesel.”  Jive rolls up, but Clearwater also rolls up Jive, but for a two count.  Jive gets sent out as Freeman and Clearwater duke it out, and that’s all Jeez needs to send him to the ring post, and then send him back in the ring for Clearwater to pin.  Clearwater isn’t winning that way, despite Jeez’s protestations.  Rush tries to take advantage, but he eats a Midas Touch (big boot) from Clearwater to seal the victory.

Your Winner via Pinfall:  Jordan Clearwater

End of the match has Black Jeez get in Clearwater’s face to not pander to the fans and focus on the win.  Curious how long this partnership is going to last.

Plugs for the Champions Series coming up July 27th.  8 Champions!  20 contestants!  Only One Prize!  There can be only one!  (Whoops!  I had Queen’s “Princes of the Universe” playing.)

Galli is back to bring us the match from yesteryear in remembrance of the late Joseph Hudson.  If you’ve never seen this match, you should seek this out.  As for a recap, this is what took place back, as we cast our gaze back to a pre-pandemic time for New Year’s Clash from January 6th in at the Wilma Rudolph Event Center in Clarksville, TN, for… 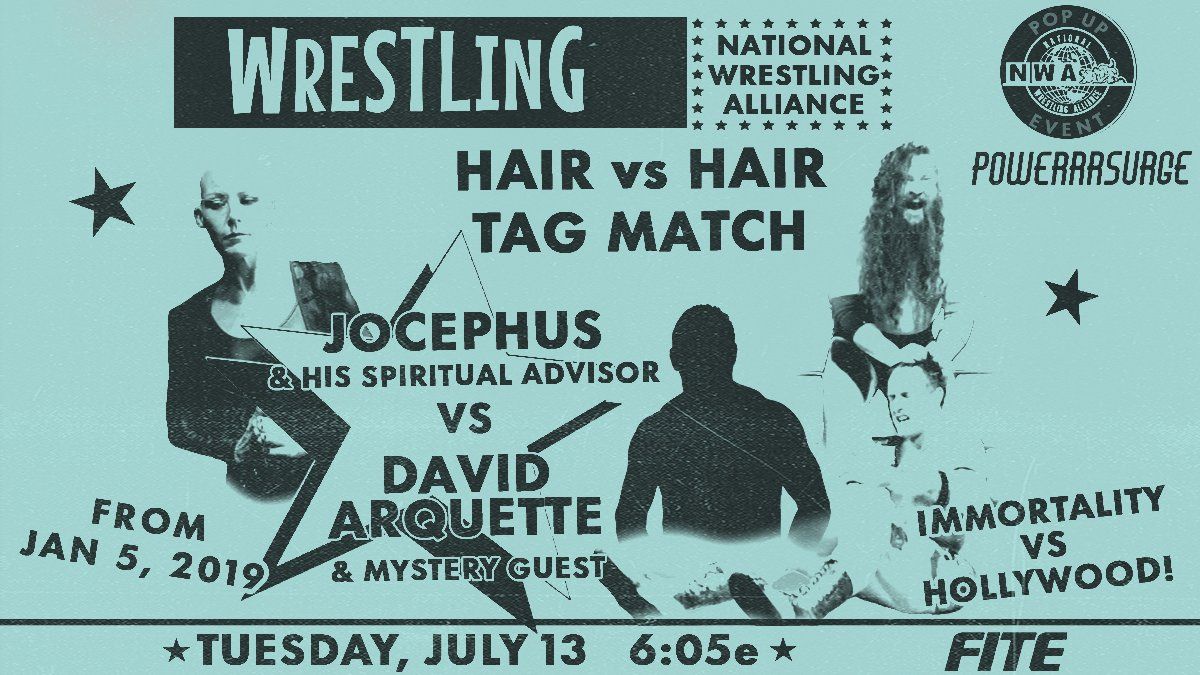 Jocephus (with His Spiritual Advisor) vs. David Arquette in a Hair vs. Hair Match

So, we know the story of David Arquette trying to gain the respect of wrestling fans from his documentary.  This did get some press on TMZ, but didn’t dive into the whole match, which is what I’m about to do.

Intro to the match has Jocephus on the stick running down Arquette, telling him to just shave his head and sacrifice his locks to the Kingdom of Jocephus.  Massive boos for Jocephus, as he lambasts this “thespian” Arquette playing a wrestler, who will get no one in the wrestling community to be his tag partner and get “Ready to Rumble.”  Jocephus has his tag partner ready in…His Spiritual Advisor (who I can describe as a bald chick, a la Tilda Swinton in Dr. Strange).  Arquette gets on the mic, and says he came back to wrestling for the fans, and trained for the fans…and he’s a better actor than Jocephus gave him credit.  Because he has a partner, and it’s (wait for it)…

Jocephus is beside himself that the former NWA Heavyweight champ and his blood rival is Arquette’s partner, but the bell rings and it’s the son of Momma Storm taking it to the “NWA’s Jim Jones.”  Start had Arquette and Storm isolating Jocephus with quick tag team moves.  Jocephus tags His Spiritual Advisor, and she gets in Arquette face, and Arquette is hypnotized…and then grabs her for a dip, and a rub (of her head, you pervs!), and a kiss to break the spell.  Meanwhile, Jocephus on the outside takes Storm out by ramming him to the ring steps, and when he gets back in the ring, he proceeds to stomp away at poor David, becoming your Arquette In Peril.

While the crowd chants, “Let’s go, David! *clapclap*clapclapclap*”, Jocephus proceeds to bite at Arquette’s head and try to rip away at his scalp. One well-placed elbow drop by Jocephus gets the cover for a count of two. Jocephus keeps up the attack, going for a leg drop that misses the mark, and Arquette now has a chance.  He crawls to his corner, to make a hot tag to a recovered Storm, and he is your Storm en Fuego.  He catches Jocephus in the Perfect Storm, and it’s one, two…wait!  He stops the pin, and tags back Arquette and assists him in getting a flying bodypress to Jocephus for the one, two, and three!

Your Winners Via Pinfall:  Tim Storm and David Arquette

End had Arquette, Storm, and Billy Corgan in ring shaving Jocephus’ long locks and beard.  Jocephus wails like a wounded animal with mange, and finally he leaves the ring with half his head scalped and tail tucked between his legs.

That’s how you recap a match.  In your face, TMZ!

Show ends and the POWERRR will be restored next week.

This POWERRRSurge had more matches than recaps, and that’s all right by me.  Plus, for anyone not familiar with the work of the late Jocephus now sees he was a big exclamation point to the NWA promotion, and not just a Question Mark, if you catch my drift.

Also, giving time to talent like Jive, Clearwater, Freeman, Rockett, and Plunkett really gives new life to the NWA brand, and gives a chance to showcase their skills.  Of those I mentioned, Clearwater has the most direction and push at this point, but don’t sleep on the other guys.

I hope that the NWA show similar matches like Arquette/Jocephus in the future, as they make a huge deal of being a steward of the history of the sport of professional wrestling.  Until then, see you in seven on Fite.TV.