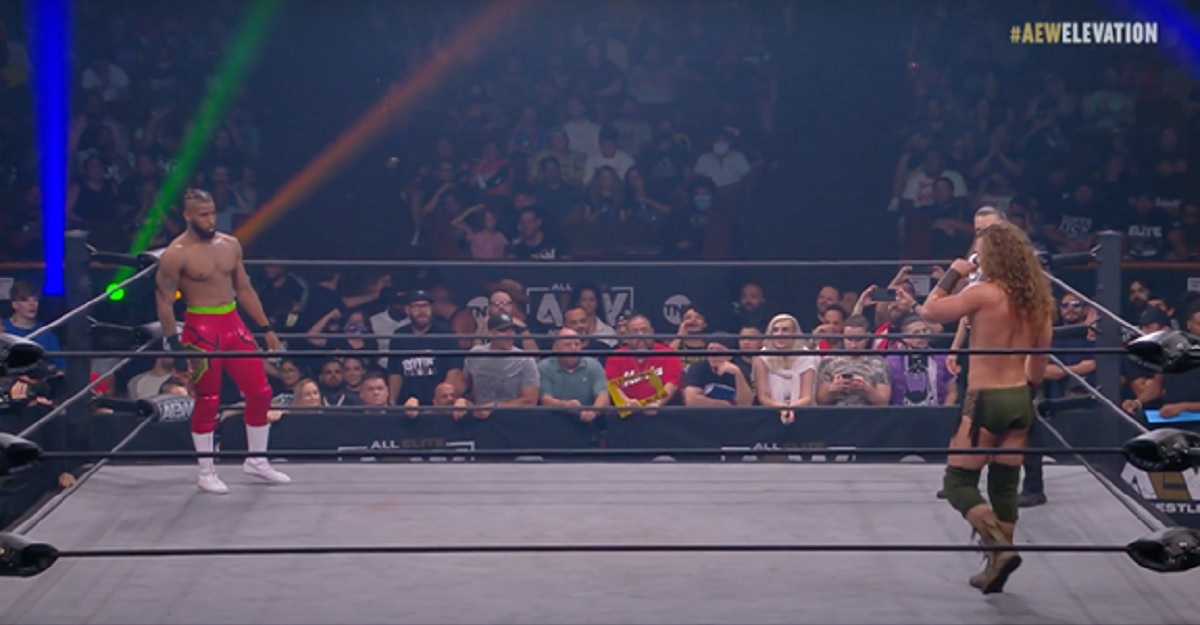 Bonjourno, wrestling peeps and welcome to the AEW Dark Elevation and AEW Dark recaps from July 12th and 13th.

Both shows had good in-ring action and matches were fast paced as always BUT, both shows also clocked in at about the 2 hour mark (1 hour 52 minutes for Elevation and 1 hour 57 minutes for Dark) making these shows a grind to watch especially if you tried to do it in one sitting.

Like last week, I thought Elevation had the better show in no small part because of the live crowd but I got the sense they were tiring out especially when you consider the Elevation matches were taped during a Dynamite show which makes for a long night. I started fading during both shows at about the one hour twenty mark and still contend that the sweet spot for these shows are in the one and a half

Easily the best match from the two shows was Lee Johnson vs Jungle Boy from Elevation and if you watch nothing else from this week’s shows, watch this match. Jungle Boy is always mentioned as the future of AEW but I would argue that Lee Johnson is right there with him. I would also recommend Wheeler Yuta vs Anjelico from Dark as well. Both guys wrestled well in a good competitive match.

2. Matt Hardy (w/ HFO) beat Fuego Del Sol when Fuego tapped out to The Leech. Prior to the match, Hardy cut a promo about Fuego and Christian Cage. The crowd was solidly behind Fuego.

3. Riho hit a double stomp from the top rope to get the pin on Amber Nova. This was a good showing by both women. Nova has a good look and had some good offence.

4. Backstage vignette with Dustin Rhodes psyching up Lee Johnson for his match with Jungle Boy.

5. Powerhouse Hobbs (w/ Hook) got a quick win over Baron Black with a spinebuster.

6. Yuka Sakazaki used the Magical Girl Splash to beat KiLynn King. This was Sakazaki’s first match back in AEW since the Revolution PPV in 2020. Sakazaki did not look like she had lost a step and this was a good match. I was hoping King would get the win though. I’m sold on her.

7. The Gunn Club (Billy and Colton) & The Varsity Blondes beat The Acclaimed and Chaos Project when Pillman hit the flying lariat on Luther to get the pin in a fun match. Serpentico was the workhorse in this match getting beat up by pretty much everyone including his own team. After the match, Bowens cut a promo on the Blondes but the Blondes chased them off. Oh and I’d be remiss if I didn’ give the Max Caster pre-match rap rating. Caster somehow rhymed Colton with Trojan. That’s a solid 7/10.

8. Brain Cage pinned Alan ‘5’ Angels after hitting the Drill Claw. Not a bad match but Angels shouldn’t be knocking Cage off his feet as easily as he did.

10. Leyla Hirsch submitted Kelsey Heather with a cross armbreaker in a quick match. I really like Hirsch and want to see her on Dynamite.

11. Scorpio Sky hit the TKO on Shawn Dean to get the pin. Dean got some good moves and a few near falls during the match. Ethan Page joined the commentary team.

12. Mark Sterling and Jade Cargill promo. At the risk of raising the ire of SlamWrestling senior editor Bob Kapur, they need to move this storyline along as it’s getting stale. And in case you forgot, she is still ‘that b*tch’.

13. Tay Conti got the Tay-KO for the win over Labrava who was making her AEW debut. Tay’s judo throw offence never gets old.

14. Jungle Boy beat Lee Johnson after getting a rollup for the win. This was a very good match with both guys getting some great offence in a very competitive match. The finishing sequence was really well done.

16. Red Velvet used the Chef’s Kiss (which looked like it legit landed) to beat Leila Grey in a quick match. Red Velvet is another wrestler with a bunch of potential and I love her ring entrance.

17. Jora Johl cut a promo and has decided to join HFO. I’ll admit, I’m intrigued with this storyline. It was also cool that Johl cut his promo in his native language (Punjabi I think but don’t quote me on that).

19. Shida applied the Full Metal Muffler causing Julia Hart to tap. During the match, Shida was more aggressive than normal which the commentary team pushed. Hart is improving but you can tell she is very green especially when wrestling someone like Shida.

20. Darby Allin (w/ Sting) hit the Coffin Drop on Anjelico (w/ HFO) for the win. After the match, HFO and Sting stared each other down, Christian Cage came after Matt Hardy which started a post match melee. Ethan Page and Scorpio Sky came out and were stared down by Darby and Sting. Sting and Darby cut a promo to close out the show.

1. Matt Hardy (w/ HFO) used the Leech to submit Jah-C for the win. After the match, Hardy made Jora Johl wipe him down with a towel which Johl did not appear happy about.

2. Brian Cage got the Drill Claw and the pin on Foxx Vinyer in a very quick match.

3. The Acclaimed beat Derek Pisaturo and Roman Rozell when Caster hit the Mic Drop on Rozell for the pin. Rozell and Pisaturo got a lot of offence in this match. Max Caster pre-match rap rating 7.5/10 as I thought it was a slightly better than the Elevation rap.

4. Diamante submitted Harlow O’Hara with a half straight jacket submission in a short match. They showed a Diamante promo earlier from the day taking a shot at Big Swole. I hope they give Diamante a shot. She is another wrestler with a bunch of potential.

5. Ethan Page used an Ego’s Edge to get the win over Ryan Mantell. During the match, Scorpio Sky joined commentary.

6. Big Swole used the Clearwater Cloverleaf causing Sahara Seven to tap. After the match, Swole got on the mic and took a shot at Diamante. This was not a bad match at all and Sahara Seven did well but I thought Seven was Dustin’s gimmick?

7. Dante Martin pinned RSP after hitting a flip over stunner.

8. Evil Uno and Stu Grayson got the pin on Papadon and Sean Maluta after hitting the running punt/Piledriver combo on Papadon for the win. I really like Uno and Grayson as they are a good team with some good double team moves.

9. Ryan Nemeth hit the rude awakening on Marcus Kross (not A.S.H). Once again, Marcus Kross shows that he has the strongest hair care product game on the AEW Dark roster.

10. Penelope Ford used a gutbuster to get the pin on Robyn Renegade. Ford has shown some in-ring improvement over the last few weeks.

13. Lee Johnson and Brock Anderson beat Mark Davidson and Aaron Frye when Anderson hit a spinebuster on Frye for the win. With due respect to Anderson, why is Johnson tagging with him? Johnson deserves a singles push as a young up and comer.

14. Wheeler Yuta cut a promo for his upcoming match against Anjelico later in the show.

15. Julia Hart pinned Madi Wrenkowski after a thrust kick then split for a win. I’ve said this about Hart before….she is getting better but is still extremely green. I thought Wrenkowski was a much better worker in this match.

16. The Blade (w/ Bunny and Matt Hardy) used a Doctor Bomb to beat Jake Tucker in a fast match.

17. Anjelico and Jack Evans cut a promo on Wheeler Yuta.

18. Marq Quen and Isiah Kassiday got the win over Joeasa and Deonn Rusman when Private Party hit Rusman with stereo corkscrew kicks.

19. Powerhouse Hobbs had another quick squash after hitting a spinebuster to beat Travis Titan.

20. Colten Gunn hit the Colt 45 on Cezar Bononi giving the Gunn Club (Billy & Colten) a win over the Wingmen (Cezar Bononi & JD Drake). This was not a bad match at all and I really like JD Drake.

21. Anjelico submitted Wheeler Yuta with the Navarro Death Roll. This was a solid wrestling match with both guys getting offence. The commentators pushed the fact that Yuta had gotten a surprise win over Ryan Nemeth.

Thanks for checking in and we’ll c-ya next week.