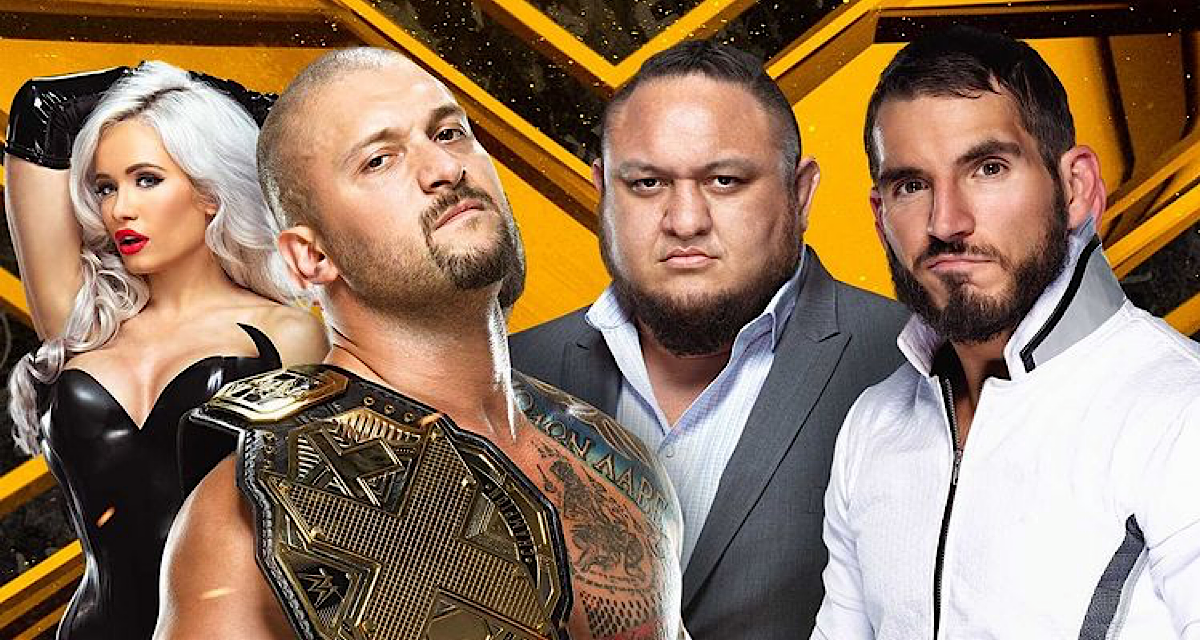 Following a standout Great American Bash special from NXT last week, the black-and-gold brand is moving onward — but maybe not upwards just yet. Tonight’s big headline matchup was Karrion Kross versus Johnny Gargano for the NXT Championship with Samoa Joe, a weekly highlight, as the special guest referee. A fantastic closer, the match was probably good enough to consider tonight’s episode a one-match show.

Moon is missing her green-haired better half Shotzi, who just recently debuted on Smackdown, but this unending rivalry continues on. The competitors are equal throughout a stagnant-feeling opening half until Moon explodes with a suicide dive before picture-in-picture. She delivers her comeback after break, but Kai reverses the momentum with a string of kicks. Moon hits a top-rope Hurricanrana but ultimately succumbs to Kai’s GTK for the three count victory. The lights go out, and Xia Li confidently squares up to Raquel Gonzalez — who, don’t forget, is still the NXT Women’s Champion, which has been treated like a complete afterthought.

Diamond Mine was interviewed earlier today as Malcolm Bivens issued an open challenge. Stepping into frame was Bobby Fish, standing eye-to-eye with his former stablemate Roderick Strong. But horses are held for now, because Fish instead will face Tyler Rust tonight.

“To the broom” goes Cameron Grimes as LA Knight’s new butler. Basically, Grimes gets groomed up while exchanging ha-has with Knight by the pool. Is this butler gig contractually obligated?

It’s been about three weeks since Diamond Mine debuted, yet no explanation from either Malcolm Bivens or Roderick Strong has been given. Nevertheless, Fish displays his work against Rust before Strong provides a distraction atop the apron. This allows Rust to capitalize with a chop block and buzzsaw kick for three. Jeez, tonight’s opener couldn’t have shared some minutes for Fish and Rust? Diamond Mine looks to attack Fish again, but Kushida makes the save. What an underwhelming few weeks for Diamond Mine.

Tonight’s special guest referee Samoa Joe gets commanding with the NXT Champion Karrion Kross during his training session. Joe won’t be pushed around!

Sarray so politely wanted Toni Storm, but Smackdown again interrupted the women’s division plans. Dolin is substituted in, but before long, RAW’s Mandy Rose appears onstage. Meanwhile, Sarray obliterates her opponent with two dropicks and a Saito suplex for three, and Rose walks away. Whatever this is, it’s hopefully better than a Doudrop situation.

Backstage, Legado del Fantasma’s Joaquin Wilde says that Hit Row’s cypher last week was “offensive to (his) ears.” Santos Escobar turns his attention to Dexter Lumis, who he wrestles next.

Due credit to both Lumis and Escobar for their intensity and commitment, but the former’s spooky spot interferes pretty quickly; Lumis disappears and reappears from underneath the ring before commercial. As Escobar works down Lumis, his talent and ability really shines. Inevitably though, Lumis makes the comeback as LDF interferes, which lets Escobar capitalize with the Phantom Driver for three. Well, apparently, Hit Row themselves took offense to LDF’s words, and the two factions stare one another down.

LA Knight and his butler Cameron Grimes are outside on a gigantic lawn. Knight tries fazing Grimes by making him mow, but the latter actually enjoys the task.

During the commercial, Indi Hartwell attempted to carry off a defeated Dexter Lumis, but they crumbled under the weight. Floored, they were about to kiss before Candice LeRae made the block. Where does this hoopla honestly lead?

Hudson has impressive size, and Jiro has an impressive blazer. Evidently, size beats blazer as Hudson ransacks the opposition. But Jiro has fight, reverses a huge Razor’s Edge, and connects with an outside moonsault. It isn’t enough though, because Hudson reverses with a Big Boss slam for three. Hudson’s got big upside — 6’5” at that, and advances onwards in the 2021 NXT Breakout Tournament.

A video package was put together for Io Shirai and Zoey Stark — the new NXT Women’s Tag Team Champions. The lineage has been pretty forgettable, hasn’t it?

Kacy Catanzaro and Kayden Carter vs The Robert Stone Brand

Aliyah and Jessi Kamea — who probably has the most potential between the four, pick apart the miniature Catanzaro until Carter tags in. And before Robert Stone standing ringside could even blink, Catanzaro connects with the 450 for three. Afterwards, Aliyah destroys a shoeless Stone as Kamea looks on in confusion, but out comes Franky Monet to lead them away.

“The law-abiding citizens” Johnny Gargano and Austin Theory are elated when Samoa Joe explains his pre-match rules. Joe’s annoyed expression is priceless, much like every segment he’s partaken in since returning. But once again, Pete Dunne appears to continue his and Joe’s staring contest; looks like Joe won tonight.

LA Knight catches Cameron Grimes chilling by the pool while a poor child — Noah — mows the lawn. Noah and Grimes push Knight into the pool, which hopefully ends tonight’s string of butler vignettes; can’t imagine the utter hilarity that next week will bring…

Look, it’s star power: Adam Cole arrives in-ring and reacts to his Great American Bash victory. Things get intriguing when Cole directs his message to Samoa Joe, but another big man appears instead. Bronson Reed is still black-and-gold and counters an attack from Cole before Samoa Joe makes his entrance.

Tonight’s championship main event is officiated by Samoa Joe, who officially rings the bell as Gargano starts the attack. Gargano squeezes some offense in, but the 6’4” Kross overpowers by slamming the opposition into the announce desk. Clearly, Samoa Joe subscribes to the “referee’s discretion” idea, but the competitors return in-ring during picture-in-picture. The crowd is emphatically behind Gargano and his comeback — which includes a slingshot spear and suicide dive, but Kross recuperates once again. Gargano keeps fighting back and cinches the Gargano Escape, but it’s reversed into the Kross Jacket choke. The champion refuses to break, and Joe forcibly pushes Kross away. Joe again interferes by taking the steps away from Kross, which allows Gargano to capitalize with the One Final Beat for a close two. But multiple powerbombs, a Doomsday Saito, and the ultimate running forearm puts Gargano away.

The champion and Joe exchange words in-ring, but before the latter walks away, Kross cinches the Kross Jacket. It’s always been the inverse, but tonight, Joe is the person put to sleep.

Karrion Kross continues to impress and excel with a great main event against Johnny Gargano. And an NXT constant as of late, Samoa Joe was gold. But besides that — and perhaps the Adam Cole promo, the remainder of tonight’s show was uninteresting and lackluster. Kross, Gargano, and Joe saved the show, and y’all should save yourselves the time.