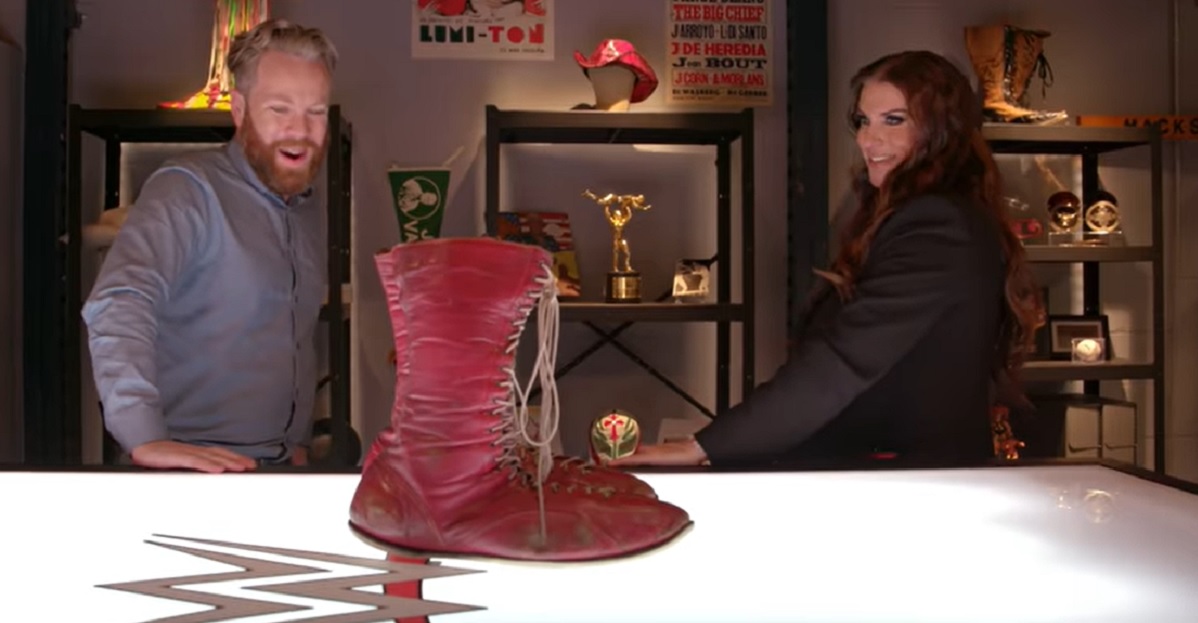 Over the past few weeks, the A&E show WWE’s Most Wanted Treasures has followed a fairly consistent formula: a WWE Legend goes on a hunt to find collectibles and memorabilia from his storied career. This past Sunday, the formula was changed, however. Which is appropriate in a way, because the subject of the episode – the legendary Andre the Giant – wasn’t like anybody else in the history of the business.

The first notable change was that the main subject of the show wasn’t able to participate, as Andre passed away in 1993. Instead, two modern-day giants – Paul “Big Show” Wight and Mark Henry (both of whom are now working for AEW, though they were simply referred to as “WWE Legends”) – were recruited to join current NXT star AJ Francis on the treasure hunt. It was interesting to see these two close friends interact on the journey, playfully goofing on each other at times, but also sharing a deep respect for Andre. Even though neither of them had ever worked with Andre, Wight had a couple of connections with him: he had been originally billed as Andre’s son in WCW, and he shared the same disease, acromegaly, that Andre had that caused his accelerated growth. Henry, while not as connected tangibly to Andre, was definitely the more emotionally-affected by Andre, and he broke down in tears several times during the episode, or when holding some of the items that they found over the course of the episode.

The second change was that the show really delved into Andre’s life, both in and out of the ring. While many of the episodes merely show some recycled clips of the subject in action in the ring, this one included a lot of rare photos and video footage, and a significant amount of private material owned by Andre’s friends. Indeed, with lots of commentary from his friends Rhonda Orton (“Cowboy” Bob’s sister, Randy’s aunt), Jackie McAuley, and (former WWE referee) Tim White, it felt at times more like a bonus episode of the Biography episodes that centered around WWE legends (complete with some revisiting of history and occasional errors – for a comprehensive authoritative source on Andre’s life, nothing will touch the book Eighth Wonder of the World by Pat Laprade and Bertrand Hébert). But the fact that it went that much deeper into his life helped balance the more silly (worked?) segments, including a visit with – and heel turn by – former WCW manager Sonny Onoo who was in possession of one of the Giant Machine masks that Andre wore while working by that name in the 1980s.

By extending the running length to two hours, versus the other episodes in the series, which were only an hour long, this one felt a lot more in-depth, and allowed them to better tell the stories behind the memorabilia items, making it feel even more special when they were able to procure them. (The whole episode could have been in Chris Owens’ Andre shrine.)

The other thing that made the episode feel special was the amount of on-screen time from the McMahon family. In other episodes, Stephanie or Vince may make a perfunctory appearance at best. For the Andre episode, a lot of time was devoted to Stephanie as she shared fond memories of Andre from her childhood, including him holding her up on one extended hand, and a dinner date they shared when she was a teen. It showed some rare vulnerability and emotion from Stephanie, who normally comes across in character as a heartless ice queen. Vince himself detailed his interactions with Andre from the early days of WWE, crediting him as one of the pillars on which the company was borne.

All of those elements made this the best episode of the series so far, and – as A&E re-airs the shows frequently during the week – one that you should go out of your way to see, lest you feel a giant regret.