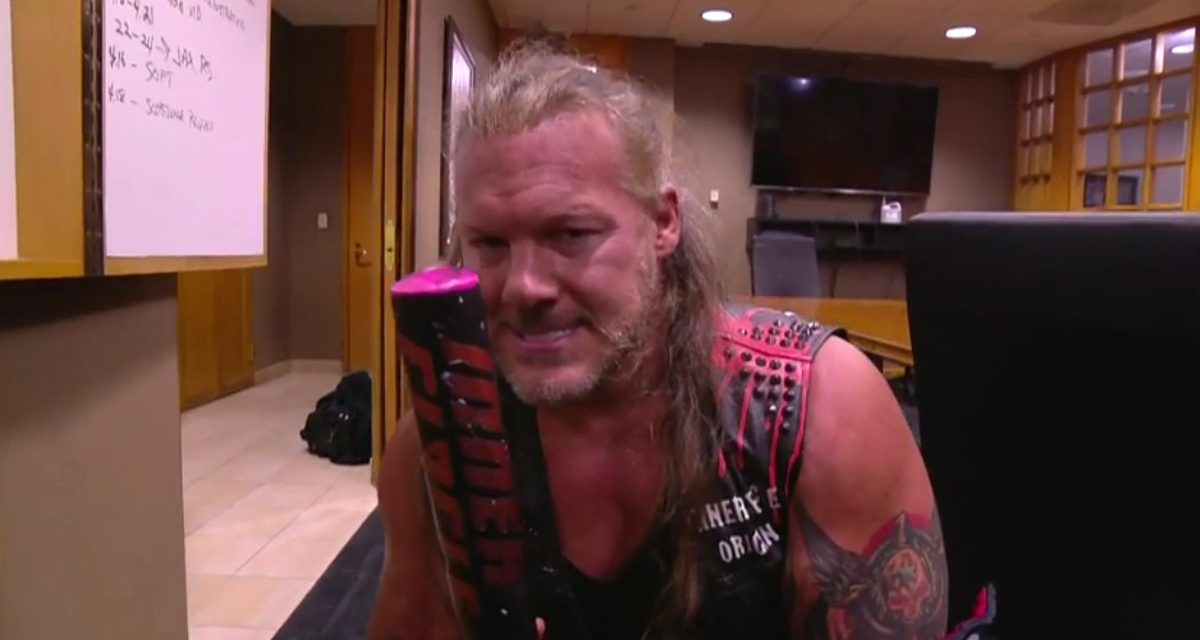 JACKSONVILLE, Fla. — Think of it as a sequel, said Chris Jericho.

He was, of course, referring to the return of Stadium Stampede at Sunday night’s AEW Double or Nothing pay-per-view, which saw his Inner Circle team of Jericho, Jake Hager, Sammy Guevara, Santana and Ortiz beat The Pinnacle (Cash Wheeler, Dax Harwood, MJF, Shawn Spears and Wardlow). Different than last year’s gang brawl of a bout, the match splintered off focusing on spotlight battles such as Jake Hagar fighting Wardlow or Sammy Guevara versus Shawn Spears one-on-one. The talent spent most of the match fighting in the offices and entertainment areas than on the actual field of TIAA Bank Field.

“The challenge since last year’s was so critically acclaimed and so well done, but the differences last year was we were kind of an uncertain world and didn’t know what to expect,” Jericho explained at the post-Double or Nothing press conference at Daily’s Place.

It’s like the movie business, he said. “It’s like any big movie that makes money, if it’s a success, then you figure out a way to do it again.” 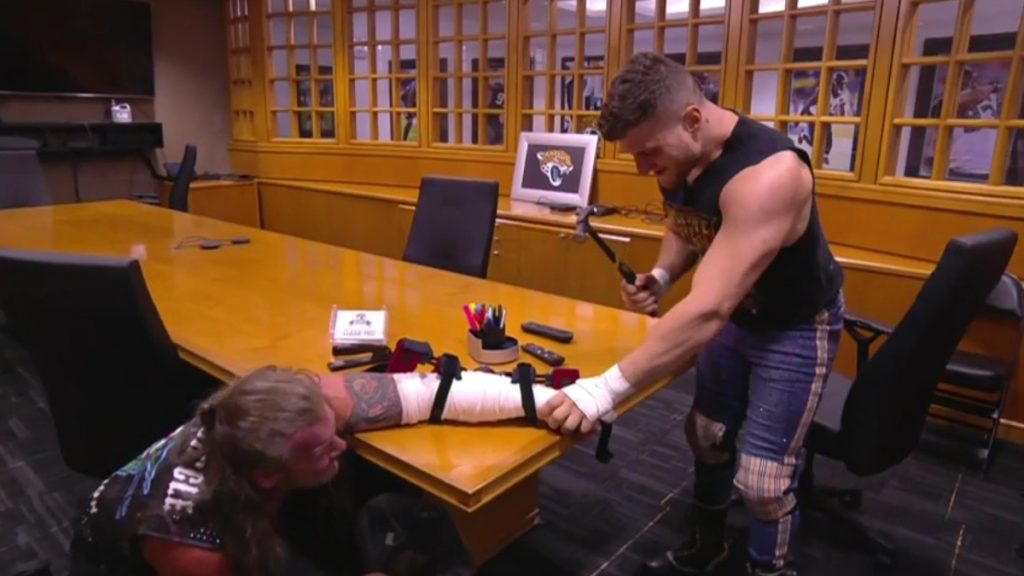 MJF is about to bring the hammer down on Jericho. Courtesy: AEW.

Jericho brought up WWE’s Elimination Chamber bouts. He was in the first two, in 2002 and 2003, and it was challenge to switch things up. “[Last year] we wanted to do something that was more fun, for people to kind of have a diversion from all the weird stuff that was going on. This year was a little more of an action movie because of a much more serious angle and story.”

With Stadium Stampede, “we changed the tone. We actually brought in some stunt coordinators from John Wick movies to help us.”

The experts on big stunts upped the ante. “We think like wrestlers and he thinks like cinematic fighting scene guys. So putting it together was was tremendous,” he said, noting that production took place over four days, and including hours and hours of work on many people’s parts.

Without the experienced stunt coordinators, they would never have even attempted the opening spot where The Inner Circle rappelled from the top of the scoreboard to the field of the stadium. 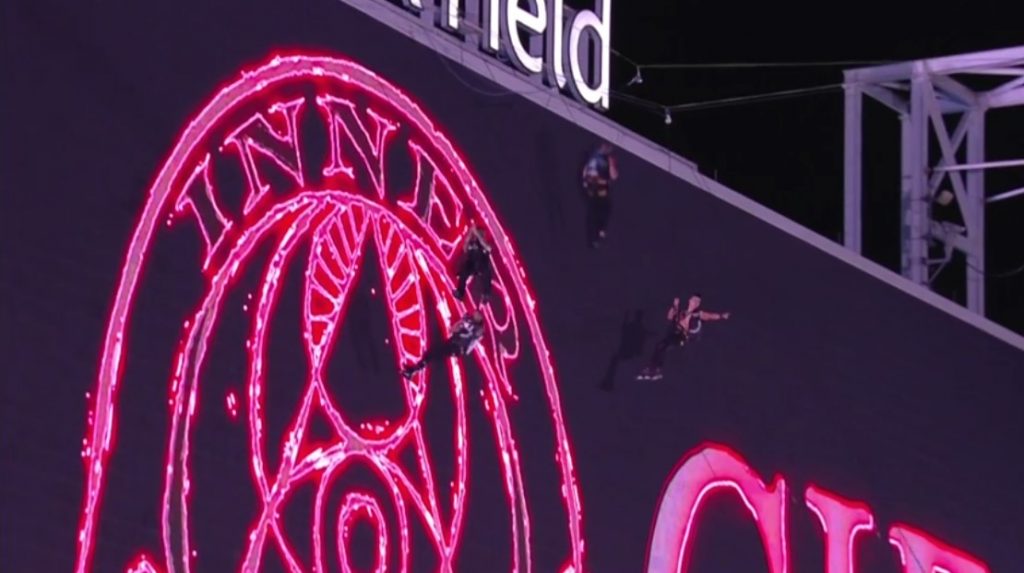 “The craziest part was actually rappelling down that scoreboard, which was absolutely insane as well — it was about 100 feet off the ground. He made us sit there for about 30 minutes,” recalled Jericho. “It was pretty scary, but once we actually took that little leap off the edge, it was super-exhilarating.”

One of the things that got football fans talking was new Jacksonville Jaguars coach Urban Meyer and assistant coach Charlie Strong participating in the goofiness, when Jericho and MJF fought into an office. Strong tossed footballs to Jericho, who pummeled MJF with the pigskins, and Meyer handed Jericho a laptop to bash his foe.

Jericho was asked, “Who had the idea to put Urban Meyer in the match and also did it take some coaxing for him to get involved?”

“Well, I think the fact that we both have the same boss was probably like, ‘Come do this.’ He was super awesome. And the best part was him saying yes,” said Jericho, confessing that he thought it would be a no from the famed college coach trying his hand at the NFL for the first time. 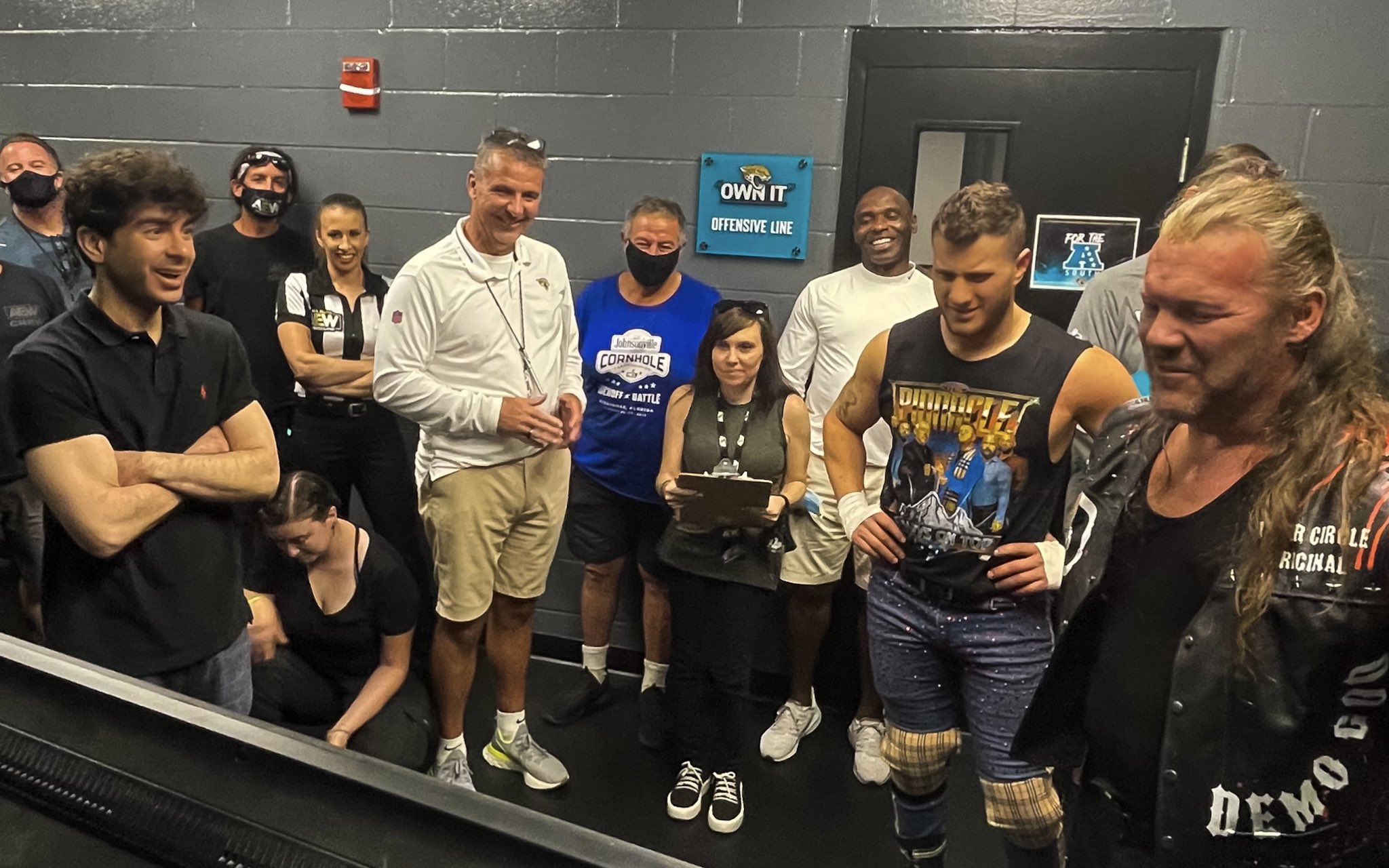 Some of the AEW crew, including Jacksonville Jaguars coach Urban Meyer (white shirt, shorts) and assistant coach Charlie Strong (white shirt in back), watch Double or Nothing backstage. Twitter photo

The Inner Circle had new duds, and Jericho explained the inspiration. “It’s all based around Back in Black. We come back in black, it’s a different attitude. It’s not the funny bubbly bunch, though we can do that stuff. But we actually tried to license ‘Back in Black’ by AC/DC, and they wouldn’t even call us back. The next day, I saw it on [an] Applebee’s [ad],” he said. “Back in black is the attitude, back in black is a look and if you watch our show, we’re still getting dressed almost completely in black, because people relate to that. And they suddenly understand this is different. And every time you turn heel or babyface, you should do something different, a different book, so people understand, ‘Oh, this is a different guy.'”

It was the main event of Double or Nothing, the Stadium Stampede bout airing on the big screen … and then becoming live. 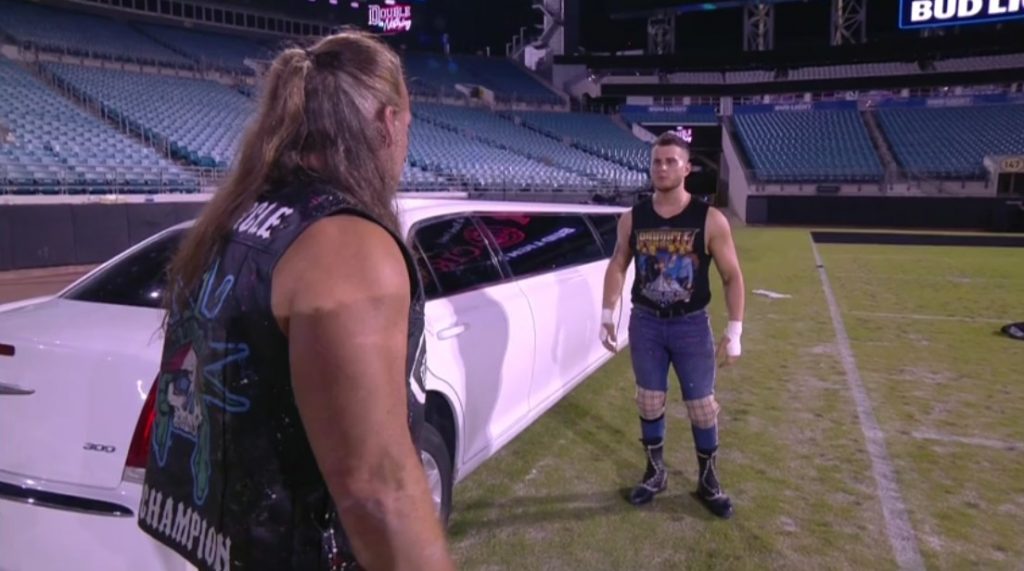 “Just watching it from behind the curtain and hearing everybody’s reactions to it, that’s when you know that it’s good, because they’re into it,” said Jericho. “I think the element that we ended up finishing live, I don’t think anyone expected that. And that was really a cool moment too, you see the ripple effect, people looking up, everyone starts looking, and then seeing that reaction. Hearing those reactions is something that was sorely missed.”

Like everyone on the show, Jericho was pumped to have the fans back at full capacity. “Now that they’re back, man, this is what wrestling’s all about.”