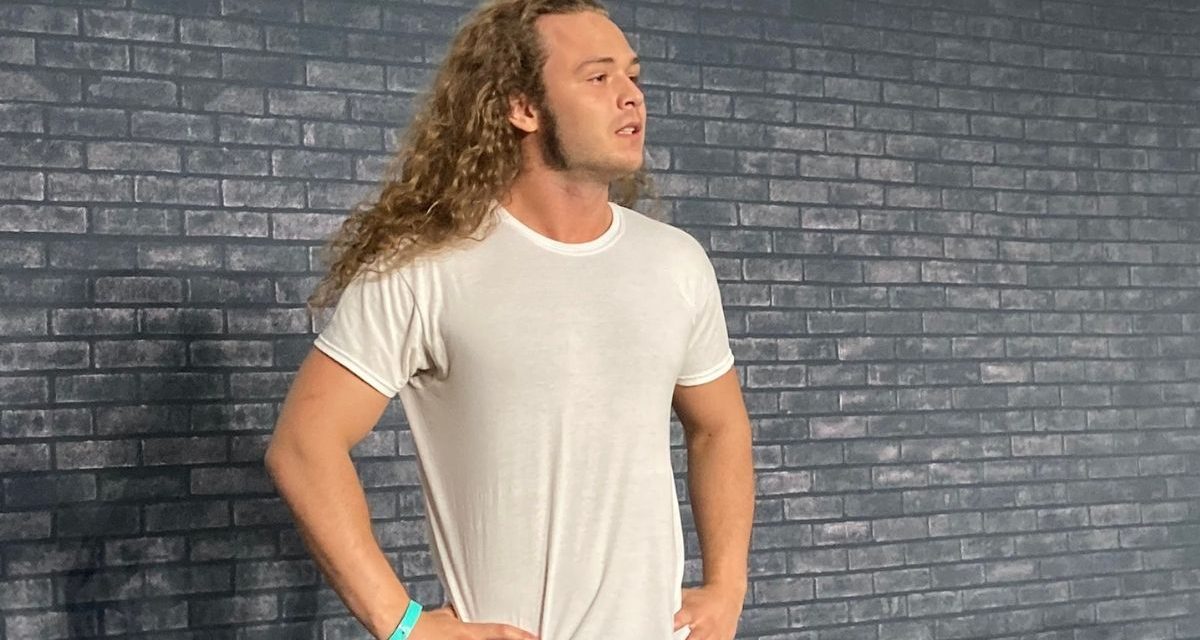 JACKSONVILLE, Fla. — To the surprise of many Jungle Boy (Jack Perry) won the Casino Battle Royale at Sunday’s AEW Double or Nothing pay-per-view. Not only did he win, but he ousted veteran Christian Cage at the end to claim the future world title shot. Post-show, Jungle Boy met with the media.

The first question was about Cage. “It was nuts, to be in there with a guy who has been doing it so long,” Jungle Boy said. “The whole thing felt like a dream.”

Post-bout, they shared a moment. Jungle Boy shared what they talked about. “He said, ‘Take this momentum and go all the way with it.’ I said a couple of things to him. That again, that kind of endorsement from him, it makes me feel that much better going forward, getting ready to wrestle Kenny [Omega].”

He’s been in plenty of battle royales in the past, but this one worked out just right. “This one’s a little different than some of the other ones. You know, I feel a lot of times I’ve come very close. I’ve been there right at the end and then it hasn’t always worked out which is a bummer. But it felt cool tonight in front of the full crowd after so long, [for] this to be the night.”

Jungle Boy explained a little about being in a battle royale in general. “At first you’ve got to worry about guys coming left and right and all these people, and there’s so many different people we have to think about. And then I’ve been the last two a couple times and each time, that’s the guy, you realize, ‘This is the guy I’ve got to beat.’ This time for it to be a legend like Christian and someone with so much experience, it felt like a really tall task but I was able to do it.”

The win is a signal of sorts that AEW believes he has the potential to be higher up on the card. “It’s something I’ve been waiting for, it feels really, really cool.”

His boss, AEW’s Tony Khan, noted that the seed had been planted for Jungle Boy’s win at AEW Revolution, when the final three in the Casino Tag Team Royale were Jungle Boy, Fenix and PAC. Jungle Boy tossed out PAC. “Jungle Boy and Fenix had a great finish and the crowd was really into it, it was one of the hottest things on Revolution, which was such a huge success for us,” said Khan in the post-show press conference. “The crowd really loved that and I knew that it was time and I really believe Jungle Boy versus Kenny, they’ll tear the house down. I’m really excited. I think he’s good as a star and he’s a guy that we’ll feature in world title matches going forward.”

Jungle Boy worked in front of a big crowd on Friday night at Daily’s Place, and then the full house on Sunday at the pay-per-view.

“It’s a completely different game now that people are back,” he said. “At first when the fans disappeared, it felt really, really awkward and weird to do and then over the past — I don’t know how long it’s been, more than a year — I kind of got used to that, I kind of forgot what it was like. So to step out there for the first time and to hear that amount of noise, it’s just nuts. You know, it kind of feels like we’re starting all over again.”

He has a new entrance song — “Tarzan Boy” by Baltimora — compared to the last time in front of fans. “A big difference now is the song, it’s different and when I’m standing back there waiting to go through the curtain, the second it comes on, I can just hear the whole place. It makes it so much easier to go out there.” Apparently, the song was Joey Janela’s idea.

Surprisingly, Jungle Boy noted he still has big-time butterflies. “I feel very terrible before I wrestle, every single time. Sometimes I’ll be walking to the curtain and I’ll pull a trash can and throw up in it, and then walk out. I get super, super nervous.” But the moment his music hits, “it goes away and I’m ready to go, I’m ready to do it.”

He’s happy to be in front of a crowd, and did wonder what some of the highlights of the past 15 months would have been like with a crowd. “Through the pandemic era, I had some pretty cool moments. I got to wrestle Cody.”

Only 23 years old, Jungle Boy was asked to look back at how he’s changed. “As far as in the ring, I think a lot of my ideas about what I need to do as a performer have kind of changed … I feel like the first time I worked with Chris Jericho, I felt the second I touched him, I just became a better wrestler. I don’t know how.” He also noted he’s learned from MJF and the FTR tag team.

“When I look back and see old clips myself, it almost feels like a different person a little bit, but I see some of the same things in there. And there are so many people here that I haven’t even wrestled yet, so I’d like to just kind of keep wrestling the best wrestlers in the world and improving every time, and see where it takes me.”

Kenny Omega is still the AEW World champion after the show. Jungle Boy game it some thought for down the road. “Kenny, that’s going to be a big one.”

But for the moment, Jungle Boy was savoring his win. “I think it’s all kind of aligning at the right time and I wouldn’t trade tonight for the world.”