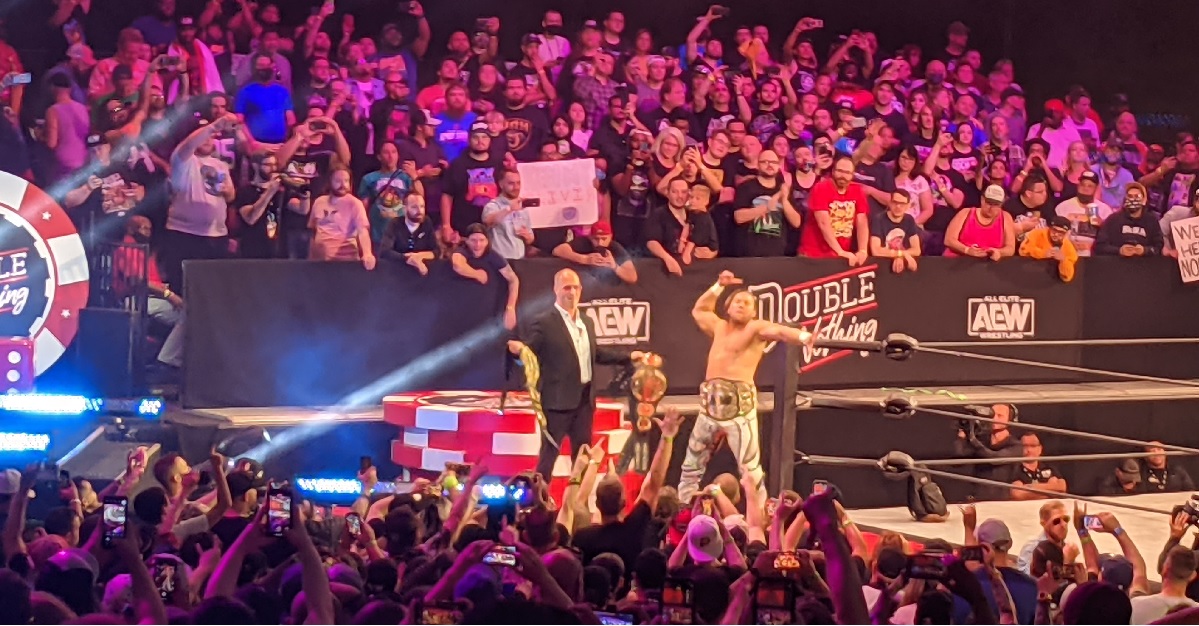 For more than 15 months, professional wrestling has rightfully taken a back seat to a global pandemic. And while the work done in those 15 months was commendable, it just wasn’t the same.

All Elite Wrestling’s presentation of Double or Nothing on Sunday at Daily’s Place in Jacksonville, Florida, was proof positive something was missing.

In front of one of the most rabid crowds in recent history, the show delivered on every level, becoming one of the promotion’s best pay-per-view events in the process.

From the moment you stepped out of your car in the parking lot, it was clear something was different. There were huge lines to get into the facility and even longer lines for concessions and bathrooms. As the hot Florida sun blazed into the building and the Buy In pre-show started, it was immediately obvious this night was special.

When Riho and NWA Women’s World Champion Serena Deeb got proverbial Road Warrior pops coming to the ring, it was time to buckle up.

The first three matches were electric — you could see how much the reaction meant to Hangman Adam Page as he entered the arena for the pay-per-view opener. The AEW World Tag Team Championship match between The Young Bucks and Jon Moxley and Eddie Kingston tore the house down. Jungle Boy’s win in the Casino Battle Royale did as well. Loud, booming, electric reactions. The type of show where, just a few matches in, had many at home wishing they could soak it in live. 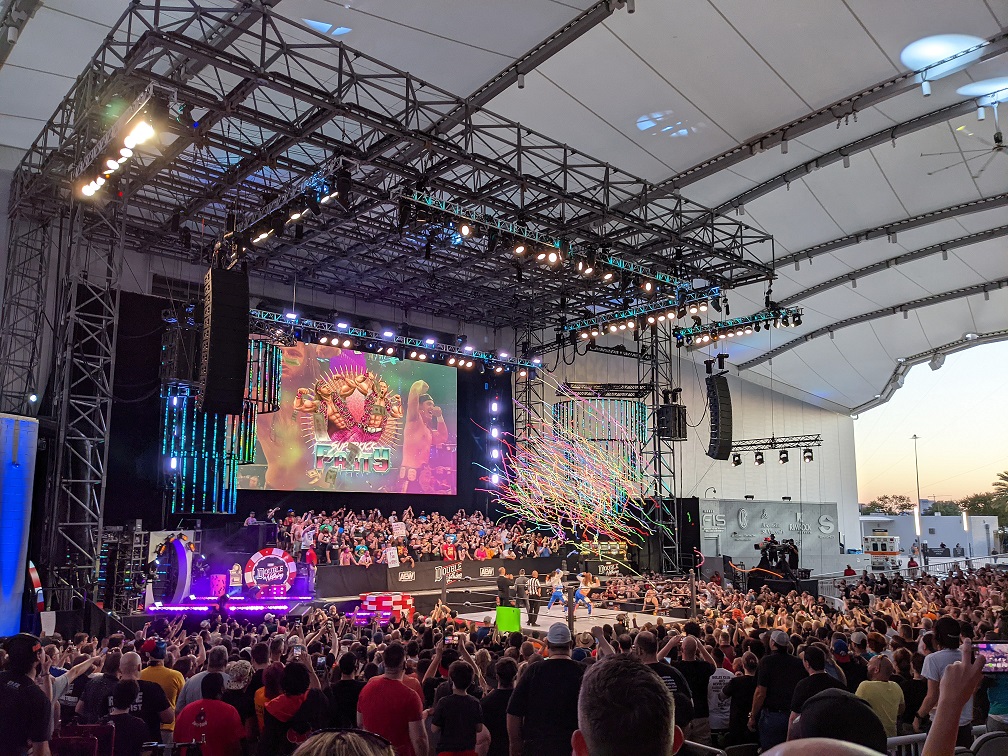 After a lull in the middle, the final few matches brought everything back together. The crowd absolutely adored Dr. Britt Baker and her finally capturing the AEW Women’s World Championship was a moment the crowd yearned for. But it also respected Hikaru Shida, with a big “Thank you Shida” chant as she departed in respect of her year-plus long title reign.

At the post-show press conference, Baker talked about her journey to becoming champion.

“I learned how to be a TV wrestler and entertainer in front of the world,” Baker said. “That was my growing process and everybody got to see it. Now I’m one of the best wrestlers on the planet.”

In fact, Baker said the championship is coming with her back to the dental office, saying the staff told her she must bring it in if she wins.

The crowd was absolutely fired up for the AEW World Championship triple threat match that saw Kenny Omega defend against Pac and Orange Cassidy.

The crowd, not believing in Cassidy’s chances at the start, were true believers in the end. The dastardly combo of Omega and Don Callis got a reaction that may have turned into a riot in another era with loud, booming chants of “F—- you Callis” and “bulls—-“ after Callis involved himself in the match to steal the title from Cassidy.

“He’s one of the best wrestlers in the world,” said AEW president Tony Khan of Cassidy. “And I’ve been keeping it under wraps and that was the plan. He’s a brilliant wrestler and isn’t going to say any of this. What’s amazing is his character completely developed in the pandemic.”

But the night truly belonged to the Inner Circle, who kept their faction together by defeating The Pinnacle in Stadium Stampede held inside TIAA Bank Field next door.

The crowd reacted heavily to all the moments, even though it was being shown on the big screen — including a cameo by Jacksonville Jaguars head coach Urban Meyer.

“He went above and beyond,” Khan said of Meyer’s involvement. 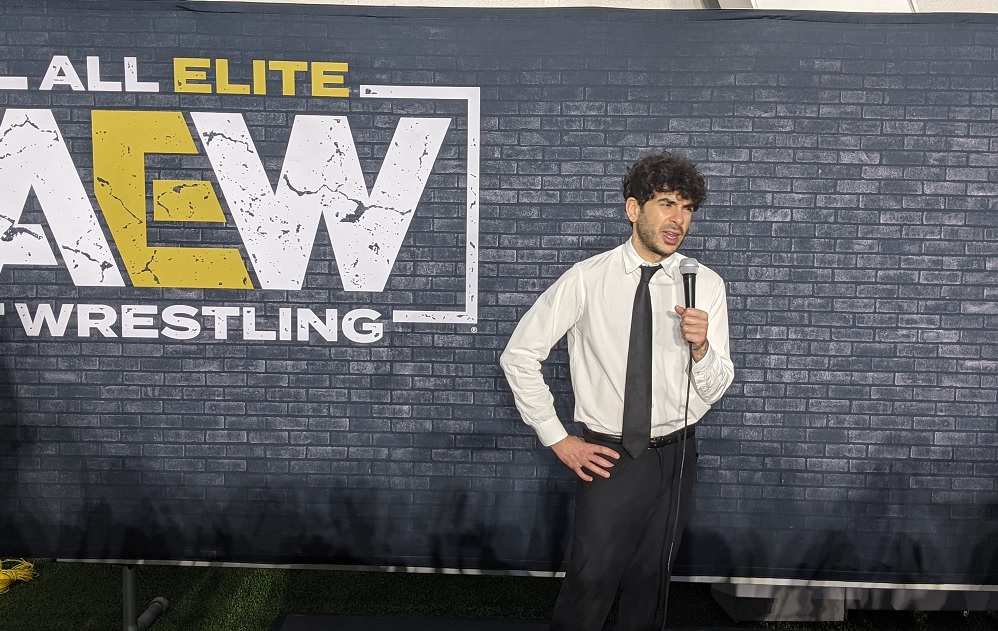 Chris Jericho said this was very monumental for everybody.

“Last year, we wanted to do something that was more fun,” Jericho said. “This year, it was more of an action movie. Much more serious of an angle and a story. For me, after spending the last four days filming it and doing a lot of editing and production work on it, just watching it from behind the curtain and hearing everybody’s reactions to it, that’s when you know it’s good.”

When the match came back into the arena, the place came unglued as Jericho and MJF battled on the second deck before Sammy Guevara and Shawn Spears found their way into the ring for the end of the match, which saw Guevara pin Spears to keep the Inner Circle alive.

After the live show went off the air, the Inner Circle held a bit of a celebration in the arena. Jericho talked about how he can’t stop smiling as loud AEW chants boomed across the arena. The crowd also chanted loudly for Guevara. Jericho also had kind words for Jacksonville, AEW’s host city for the last year.

“Jacksonville helped us get through all the pandemic bulls—-,” Jericho said, adding now that there is light at the end of the tunnel, everyone can start having fun again.

All told, this was an incredible night for professional wrestling. WrestleMania last month was a start, but this was on a different level in every aspect (including the weather). As professional wrestling starts to go back on the road in July in America, this moment cannot be lost in the history of this sport. It was a truly monumental moment that should stand the test of time.