Army of the Dead is dead on arrival 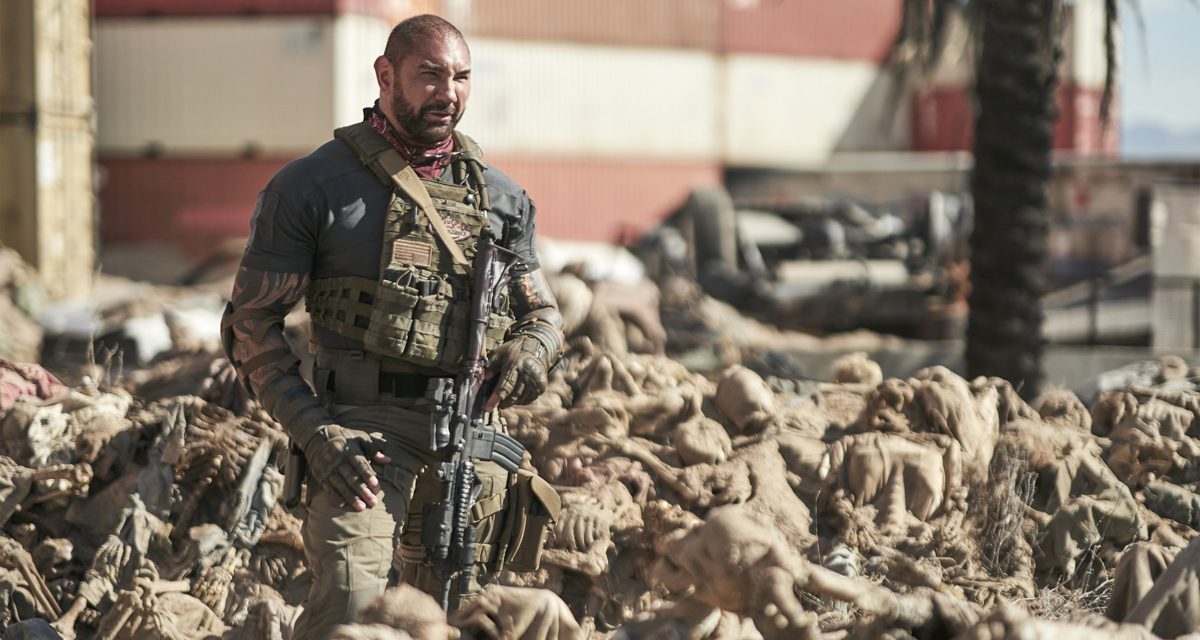 Army of the Dead gets one thing right and one thing only. It shambles just like the blood-thirsty undead it features. The film stars former WWE superstar Dave Bautista — but more on him later.

As bloated as the rest of Zack Snyder’s back-patting opuses, Army of the Dead’s runtime is an agonizing two hours and 30 minutes. An hour of bland, pointless exposition from the cardboard cut-out characters could have easily been chopped. Not that it would have made the film any better though. It just would have just reduced what amounts to a prison sentence spent in isolation. And yes, folks, this is the film that the WWE was paid seven figures to promote with those moronic zombies and laughed all the way to the bank.

Mirroring Peninsula, the phenomenal sequel to the epic Train to Busan, Dead is a heist movie within a horror movie. In fact, the plot similarities are quite, let’s say, interesting indeed.

In Peninsula, a Chinese mobster hires a roughneck crew to retrieve a crapload of cash from a quarantined area of South Korea. The catch is that the area is cut off from the rest of the world because of a zombie outbreak. 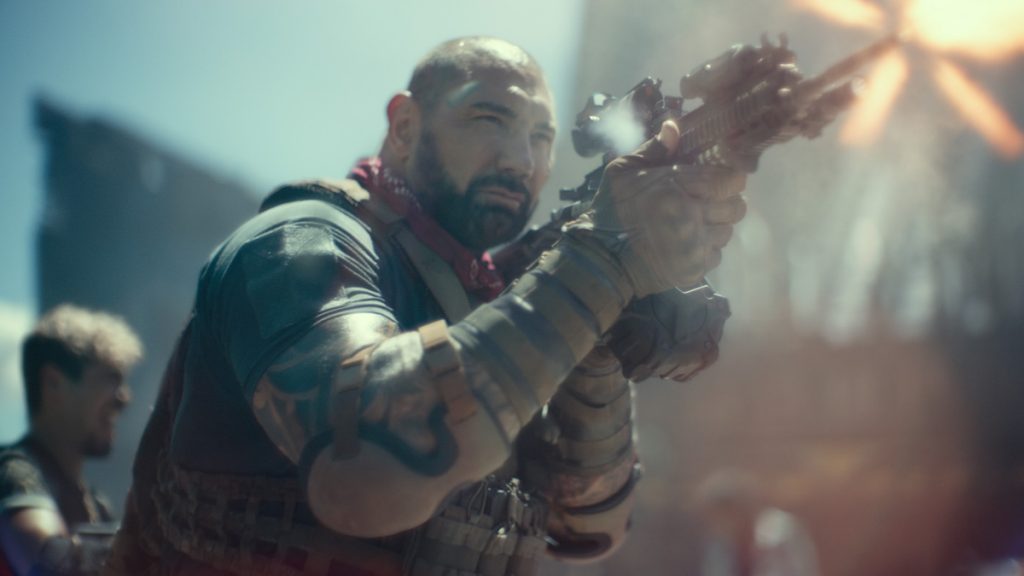 In Dead, a Japanese casino owner (Hiroyuki Sanada) hires a roughneck crew to retrieve a crapload of cash from a quarantined area of Las Vegas which has been walled off from the rest of America because of … you guessed it!… a zombie outbreak.

What follows are generic human heroes battling generic monsters in generic set pieces in a generic paint-by-numbers bloated horror/action movie. Why anyone these days would bother churning out yet ANOTHER zombie apocalypse story is anyone’s guess.

We have seen The Walking Dead.

We have seen Z Nation.

We have seen Black Summer.

We have seen Fear of the Walking Dead.

We have seen Santa Clarita Diet.

We have seen Blood Quantum.

We have seen Train to Busan and Peninsula.

Did I mention Peninsula bears a striking resemblance to Army of the Dead?

You get the picture.

Even the side-splitting British TV comedy series Zomboat and the mind-bending, ingenious film One Cut Of The Dead from Japan were more inspired and a lot more clever than Snyder’s tedious and routine horror film. Snyder should just stick to ruining superhero movies instead.

Except for a zombie that gets splattered piece by piece in the early going, even the special effects themselves are unoriginal. There are few other cool kills but overall there isn’t even some good gore to keep anyone interested in a purely primitive, guilty pleasure level. 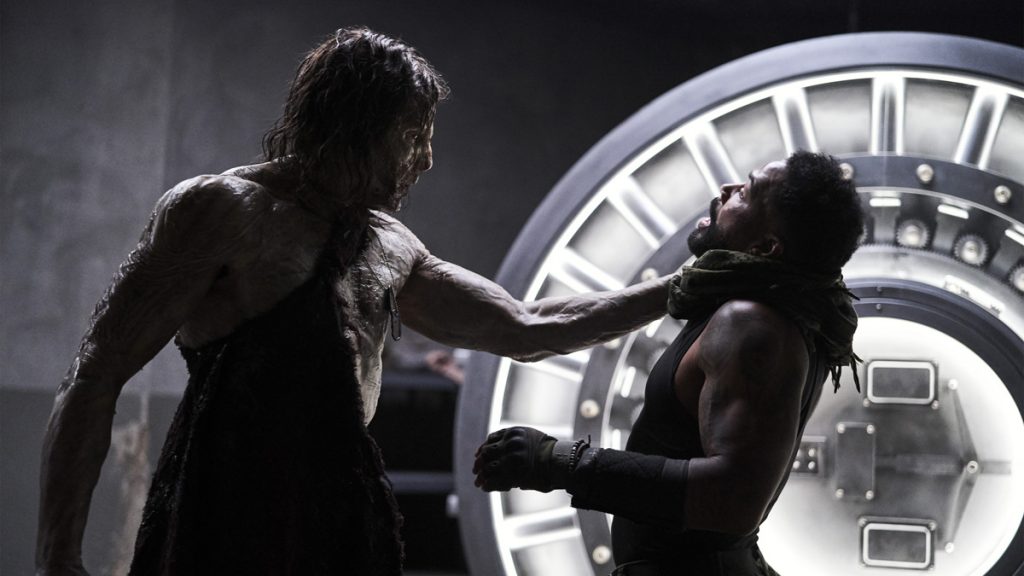 Richard Cetrone as the zombie leader Zeus in Army of the Dead. Photo Courtesy: Netflix.

And since it is Netflix and it is 2021, there has to be “woke” moments and in Army, the most blatant is the plight of Burt Cummings. Cummings is played by Theo Rossi, who captivated audiences as Juan Carlos “Juice” Ortiz in one of the greatest modern television series ever produced: Sons of Anarchy. Check it out if you haven’t already. Rossi is absolutely wasted here but at least we assume he got a decent check for his efforts. Cummings is an asshole of a detention camp guard who treats the women cruelly. For being a prick, Cummings naturally suffers a fate worse than death. We are tuned into Netflix and watching American content out of Hollywood so no surprises there.

As all-around good guy Scott Ward – the filmmakers couldn’t even come up with colourful names for their characters – Bautista is as wooden as a WWE kendo stick. Unlike other wrestlers turned action stars like Roddy Piper, Hulk Hogan, The Miz, The Rock, John Cena or even Steve Austin, besides his immense bulk, Bautista has no screen presence in Dead. It is abundantly clear why he has been confined to and excels in supporting roles such as his work in Guardians of the Galaxy, Blade Runner 2049 and the James Bond film Spectre. At this point in his career he just cannot carry a film on his own. He was great in those other films probably because he had his scenes, stayed his lane and did what he does very well but on a much smaller stage.

There is absolutely nothing special about Army of the Dead. It has no style of its own. It has no voice of its own. It brings absolutely nothing new to the zombie, horror genre and with the explosion of zombie apocalypse-themed shows and movies for the past 10 years of so, you would think the Army of the Dead filmmakers would have at least felt compelled or even challenged to flex their creative muscles. Nope, they just phoned this one in and moved on and that’s what you should do too. Move onto something better that’s more worthy of two hours and 30 minutes of your time.

Army of the Dead

The only thing inspiring about this film is it will encourage yawns and snores in anyone who has the unfortunate experience of watching it.