Dynamite: A legend and a new champ 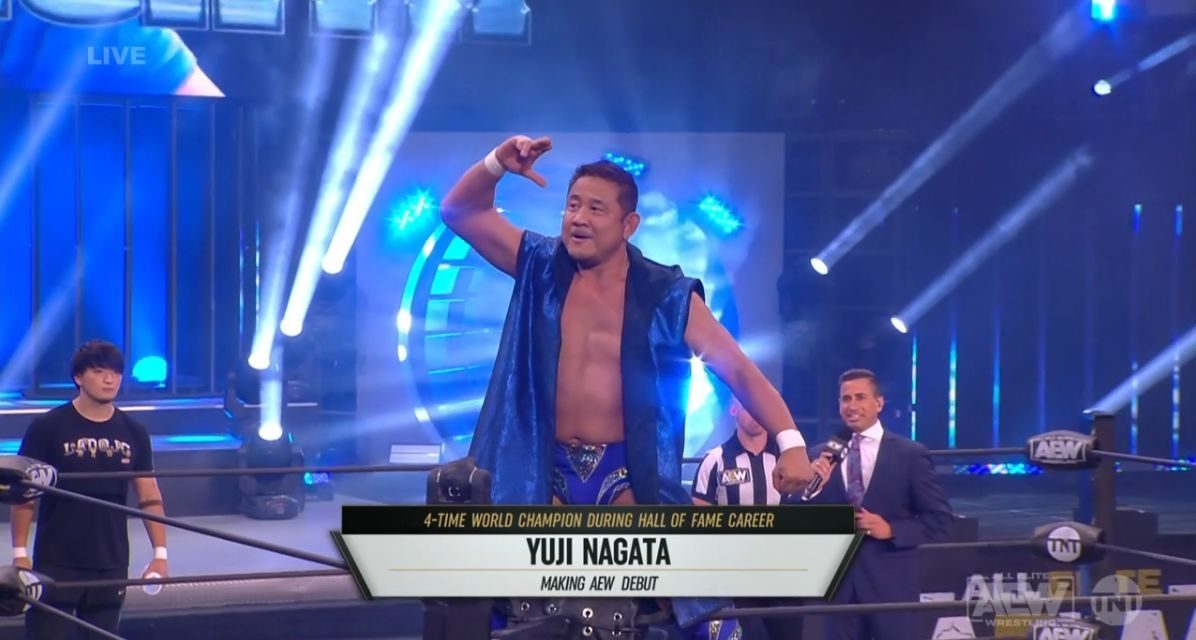 In terms of truth in titles, Blood and Guts delivered last week. The problem with those special episodes of AEW Dynamite is how to continue the momentum into a “normal” show the next week, though tonight’s card has much to offer. We’re talking three title matches and a bout to determine who will face Kenny Omega for the big belt at Double or Nothing. Let’s be off and underway, then, live on TNT.

Mox enters to the strains of the original “Wild Thing” by The Troggs, suggesting Tony Khan has whipped out the checkbook again. As for watching a true legend in Nagata, I hope I can execute an exploder off the top turnbuckle when I’m in my 50s. Heck, I wish I could do one now! Excalibur mentions that Nagata says he wants to wrestle until he’s 70, and I honestly wouldn’t bet against him. It’s cool seeing Moxley wrestle a different style than we see week to week from him in AEW as well, and to no surprise, he retains after hitting a Paradigm Shift. Mox shows Blue Justice a gesture of respect after the bell.

I enjoy when Ortiz is the spokesperson for the Inner Circle, and the group is defiant despite losing at Blood and Guts. Also, Chris Jericho is injured and Santana has been arrested. In any case, the other three members want a rematch with The Pinnacle, promising not to stop coming for their rivals until they get it.

Cody Rhodes has an announcement everyone. It starts with him talking about his pride in being an American, and I’m not immediately sure where he’s going with it. As soon as he mentions Anthony Ogogo, I get it. There’s more history lesson before he gets to the point, but it’s going to be him vs. Ogogo at Double or Nothing, and for one night only, it’ll be not “The American Nightmare” but “The American Dream” Cody Rhodes.

SCU has a few words of disdain for the way the Young Bucks have been acting lately, as well as their motivation for declaring they would disband the next time they taste defeat. Everything to lose? Yep, that’s actually the case here.

The high crimes the Bucks commit on a weekly basis against expensive sneakers need to be investigated. But more seriously, Christopher Daniels is busted open a few minutes into the match, and might be bleeding from the eye. Hopefully he’s OK, but that state of affairs leaves Kazarian fighting solo for a while … until Daniels improbably rejoins the bout. Don Callis is concerned that he’s bleeding all over Matt Jackson’s shoes, and Matt humorously recalls Shawn Michaels against Ric Flair by mockingly saying, “I’m sorry, I love you” before superkicking Daniels. Jackson cheats by using cold spray on the Fallen Angel and hitting him with the can, but it’s still not enough. A BTE Trigger finally puts Daniels down for good, but at least SCU went out with a heck of a match.

Quick, get a cameraman to the back. Moxley and Eddie Kingston are tearing apart The Elite’s dressing room, maybe in retaliation for what just happened and maybe just for the heck of it.

Backstage, Christian responds to Taz’s recent critiques with an open challenge to anyone on Team Taz and news that he is entering the Casino Battle Royale at Double or Nothing. Even though Christian is in AEW to outwork everyone, it doesn’t stop him from getting outwitted — in this case by Matt Sydal, showing some heel tendencies by jumping in on the open challenge in a desire to beat Cage before the Casino Battle Royale.

It’s going to be extremely interesting to see which way AEW is going with this, as all signs point to Cassidy winning and facing Kenny Omega at the pay-per-view. The question is whether they have something else in mind other than “underdog Orange gives his all in a losing effort,” because we’ve seen that play out several times before. Or Pac could get the victory and he and Omega can tear it down again, which would also be fine. This might give us an answer: Callis comes to the stage in the middle of the match and distracts the ref so Omega can smash Pac from behind with his title belt. As Cassidy is already down, and now Pac is too, Aubrey Edwards counts to 10. No winner means no challenger for Double or Nothing, right? Tony Schiavone comes to the stage with some conflicting news: It’ll be Omega vs. Pac AND Cassidy at Double or Nothing, a development that doesn’t sit well with the champ or Callis.

The Bucks and the Good Brothers have discovered the carnage in their dressing room and are predictably upset. But they’re also focused, with the Jacksons saying they’re planning on beating the Varsity Blonds next week on Dynamite and then Moxley and Kingston at the pay-ver-view. Fighting champions, those gents.

With the Dark Order behind him, Adam Page addresses Alex Marvez’s question about losing to Brian Cage and dropping from the No. 1 spot in the singles rankings. Specifically, he tells Cage to meet him at Double or Nothing without Team Taz to lend him a hand so he can earn that spot. Seems fair to me.

Now a self-appointed king, MJF brings out The Pinnacle for a coronation. He quickly shoots down the Inner Circle’s idea of a rematch before handing the mic to Tully Blanchard, who puts over the group’s ability to take the Inner Circle’s best shot and come out on top. He also gives the Pinnacle members expensive watches of some sort. They’re on top of the world, but it won’t prevent them from being interrupted by a loud car horn. Of course, it’s the Inner Circle in a custom golf cart towing a trailer, with an injured Jericho as the passenger. He asks MJF again if they will accept a rematch, and when they get a second refusal, Sammy Guevara hoses down the ring with more than A Little Bit of the Bubbly. Shades of vintage Attitude Era WWE. An enraged MJF reverses course and agrees to a rematch at Double or Nothing: but in a Stadium Stampede match, and with the stipulation that if the Inner Circle loses, they have to break up for good. My son is pumped for this news.

Hey, I thought Schiavone did all interviews with Dr. Britt Baker? Well maybe he was busy at the time, because Jim Ross talks to her instead. She gives Hikaru Shida credit for keeping the women’s division alive during a difficult year, but only on life support, whereas it will live again on its own when Baker wins the title at Double or Nothing — and she guarantees it.

I’m not saying it’s a rule that every episode of Dynamite needs a squash match, but it does appear to be a fairly strong guideline. Rosa wins this one quickly with a Thunder Driver.

Since Schiavone wasn’t available to speak with Dr. Baker, he apparently is free to speak with Jade Cargill. She gives a pretty contradictory answer to the question of who might end up as her manager, saying she’s her own boss but still listening to offers. Whatever.

I almost forgot that Darby Allin was thrown down a flight of stairs last week, but he brings that up during a video showing a trip back to his hometown of Seattle. He also asks rhetorically what Miro has actually done since he’s arrived in AEW and questions whether Miro even understands his own identity. Fair points, both.

It’s a slightly new look for Allin tonight as he has the bottom half of his face painted instead of his more typical left-right divide, but we don’t have much of a chance to admire it before Miro starts assaulting him. “Am I underwhelming?” Miro asks the camera as he throws Darby around outside the ring. You get the idea that this will play out like most Allin title matches do, with him absorbing a hellacious beating and then making a heroic rally to retain his belt. That’s not a criticism, just an observation. One slight deviation from the script is that Miro withstands the first rally and returns to chucking the champ around mercilessly. There are some nice reversals and escapes as the pace picks up, but Miro eventually gets Allin in a waistlock and cranks back on his neck. It’s over relatively quickly after that, and we’ve got a new champ.

There’s not much time left in the show, but a lot happens in that time. Scorpio Sky and Ethan Page run down and are greeted by fists from Sting, and then the Dark Order. Meanwhile, Lance Archer and Jake Roberts come out to the stage, probably foreshadowing Archer as the first challenger for Miro. But we need to be up out of here as it’s time for Kong: Skull Island. See you in seven!

This was another very good episode of Dynamite, which in the past would have suffered through a week on cruise control after a themed edition like Blood and Guts. Instead, this show was pretty loaded, though it drifted a little in the second hour and seemed to run out of time at the end. There’s a very nice build in the works for Double or Nothing, which is shaping up to be a really promising event.