AEW Dynamite: Blood and Guts lives up to its name as Chris Jericho takes a big fall 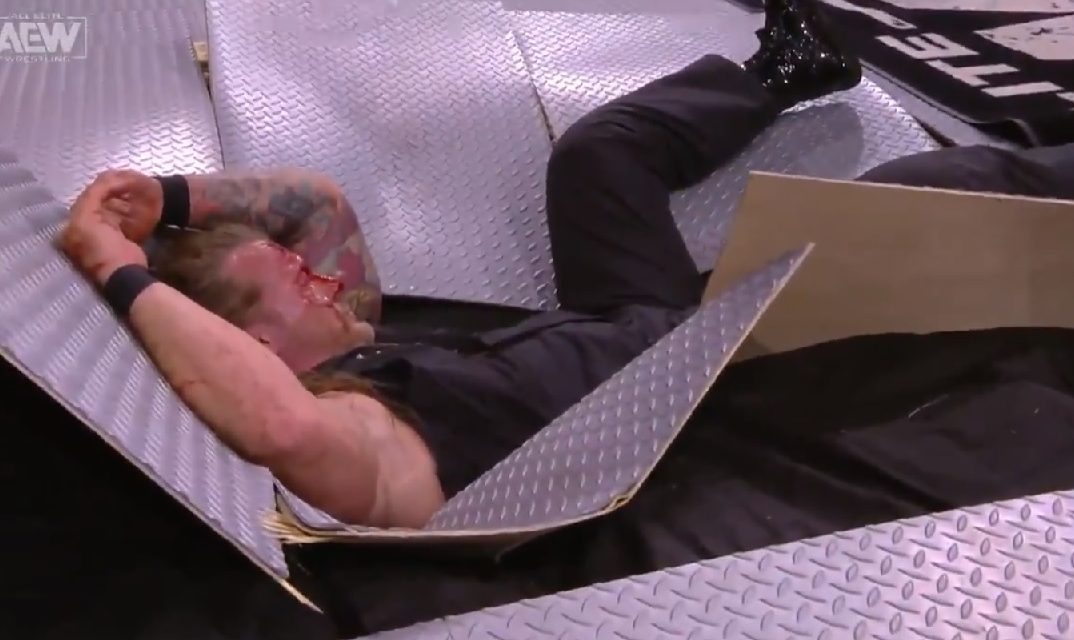 When an episode of AEW Dynamite has a parental warning that it contains material that may not be suitable for children, it must be Blood and Guts time. Originally slated to debut in 2020, this gimmick match-driven special show will pit The Pinnacle vs. The Inner Circle in a battle for stable supremacy inside two rings enclosed by a large steel cage with a roof. If that prospect doesn’t excite you, maybe you just don’t like pro wrestling. Let’s get to it, live on TNT.

After claiming Nakazawa is one of Japanese pro wrestling’s legends on the level of Inoki or Okada, Callis has some bad news for him: Omega can’t attend tonight’s event, so MT is wrestling alone. Callis is, of course, lying — Omega attacks from the crowd, using his AEW title belt as a weapon. “Kenny doesn’t need to do these kinds of things,” Tony Schiavone muses, perhaps perfectly summarizing why this current heel version of Omega is so compelling. He doesn’t have to cheat to stay on top, but he does it anyway. Poor Nakazawa ends up getting thrown to the wolves in the end anyway, as is his lot in life.

After the bell, the Young Bucks come to the stage to provide a distraction so the Good Brothers can attack Mox and Eddie from behind. As my Pro Wrestling Corollary No. 72 clearly states, the faces never have enough friends, and it proves correct again as the beating continues until Kingston receives the One-Winged Angel. The show teases a special announcement about the AEW World Championship later tonight, however, suggesting that Omega may face at least a partial reckoning soon.

Schiavone says he’s tired of QT, but let’s give him his props for going from irrelevance to … like, mid-to-upper mid-carder in a span of several weeks. That counts for something. Heck, he’s out here doing deadlift suplexes to the head guy of the company (and yes, I’m aware they are tight in real life). There’s a fun spot where both men flip each over multiple times looking to Tombstone each other, with Rhodes finally hitting his for a near fall. Marshall kicks out of that and the Cross Rhodes. After Cody picks him up off the mat, QT flips him the bird, so a suddenly very bloody Rhodes makes him submit to the Figure Four.

Anthony Ogogo makes a beeline for the ring and nails Rhodes with a body shot, draping the Union Jack over him and I suppose getting himself some more heat.

Scorpio Sky borrows a line from Jim Carrey’s Riddler and asks rhetorically who’s afraid of the big, black bat, while Ethan Page alludes to injuries he’s given Darby Allin in prior promotions. Allin tries to launch an assault as his retort, but a brief scuffle ends with the TNT champion being thrown down a flight of concrete steps. Sky and Page have a laugh at his expense, being heels and all.

I’m not saying this is going to be a squash, but since Hart is making her Dynamite debut, I don’t like her chances. Sure enough, she’s in the Lockjaw pretty quickly, tapping out.

Varsity Blonds vs. Jurassic Express vs. SCU vs. The Acclaimed

As a reminder, SCU has promised to break up the next time they lose. You’d think maybe they’d make an exception for a four-way match like this, since they can lose without really losing, but apparently not. Thus match is laid out very nicely, with SCU needing to scramble a time or two to break up a pin, but they’re able to grab the win in the end. Are they going out in a blaze of glory next week or just a blaze?

Moxley is defending his IWGP United States Championship against Yuji Nagata on the next Dynamite, marking the first time that title has ever been on the line outside of Japan. Pretty cool deal, even if you aren’t a NJPW fan.

Standing outside the Blood and Guts cage, Schiavone invites Omega out for the championship announcement. He makes it clear that he isn’t excited for Blood and Guts and doesn’t even want to be out there, but he actually talks up the fact that Pac has a chance to face him for the belt if he can defeat Orange Cassidy next week. Even after Freshly Squeezed joins them, Omega scoffs at the idea that Cassidy could ever be the number one contender. Kenny steals Orange’s Ray-Bans and gives them to Nak for stealing his valuable time.

Blood and Guts is the only match left, but first, we need to hear from Miro. After threatening to go after a championship soon, he has a contract to face Allin next week.

The Pinnacle (w/ Tully Blanchard) vs. The Inner Circle – Blood and Guts

Here are the rules: Blood and Guts begins with one member from each team for a five-minute period. The teams alternate sending a man in every two minutes, with The Pinnacle going first. Once all 10 men are in, the match officially begins. The only way to win is to make an opponent submit or surrender, with referees stationed around the dual-ring-inside-a-cell setup. Yes, folks, it’s War Games, but AEW isn’t allowed to call it that. Sammy Guevara starts for his side, as he promised to do, facing off against Dax Harwood. By the time Shawn Spears enters, Harwood’s face is already a bloody mess, and getting a chair thrown into it by Ortiz isn’t going to help. Each successive entrant hits the ring like a house on fire, leading to a showdown between big men Wardlow and Jake Hager. The fans are enjoying this. As all 10 men entre the cage and the match begins in earnest, it feels like a matter of when, not if, everyone ends up bleeding. One section of ropes is undone, part of the canvas is torn up, and MJF ends up on top of the cage. Is Jericho going up there after him? You better believe it. Both men end up in each other’s submission holds, with MJF stomping and biting Jericho’s hand in frustration when he can’t end it. With blood streaming down his face, MJF lands a shot with the Dynamite Diamond Ring, busting his foe open as well. He yells down to the Inner Circle that if they don’t surrender, he’s throwing Jericho off the cage. Guevara surrenders for his side, but what’s to stop MJF from doing it anyway? Nothing, as it turns out. Taking an impressive bump for someone at this stage of his career, Jericho gets a push from the top of the cell and smashes through the ramp when he lands. “Thank you,” yells MJF, making good on his promo from last week. “Has he ascended to the top of AEW?” wonders Excalibur. Hard to argue against it.

Winners: The Pinnacle by The Inner Circle’s verbal surrender

Time to catch your breath after that ending. Worth the wait? I’d say so. See you in seven! 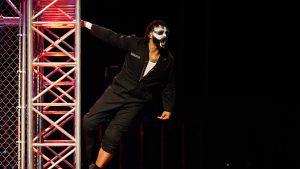 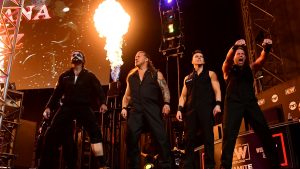 The Inner Circle is reading for battle. Courtesy: AEW., 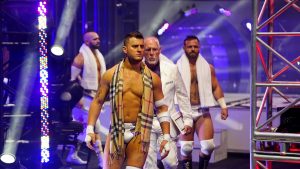 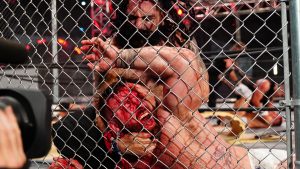 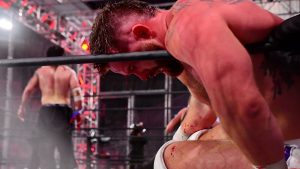 Blood pours from the head of Cash Wheeler. Courtesy: AEW. 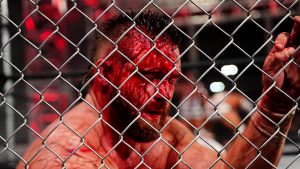 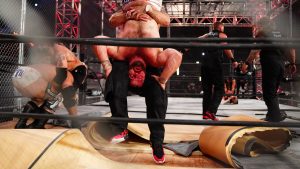 Piledriven in the cage. Courtesy: AEW. 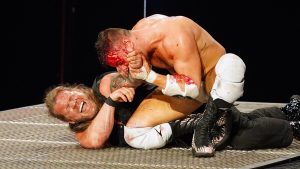 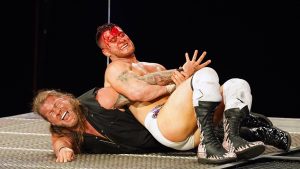 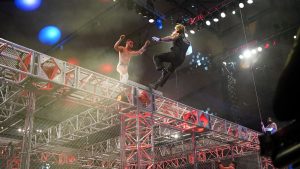 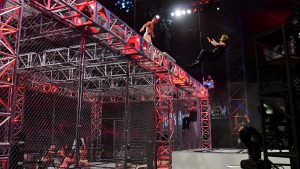 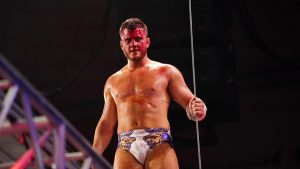 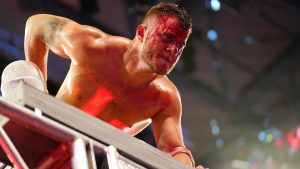 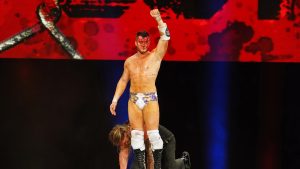 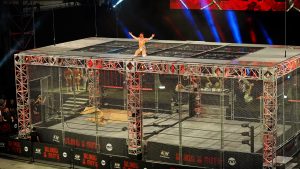 MJF is at the top of the mountain. Courtesy : AEW.

This score is mainly based on the main event, but when you get pay-per-view caliber fare on free TV, it’s hard to be mad at it. Kudos to everyone involved in Blood and Guts for laying it all out there, and you can’t help but be impressed that a performer who has done as much as Chris Jericho is still willing to go to these lengths to entertain the fans. As a bonus, the rest of the card wasn’t too shabby either. And Nagata next week!