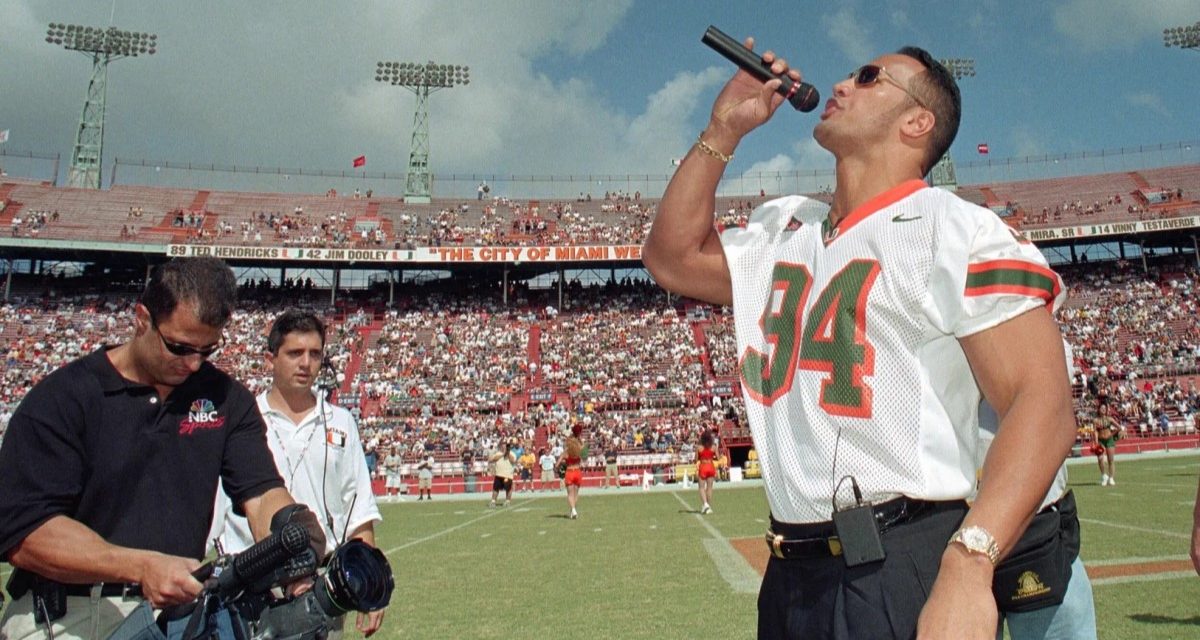 Election Day is coming … in about eleven and half years for future Dwayne Johnson. In tonight’s episode, bookended as always by the 2032 version of Johnson, he awaits the conclusion of his presidential campaign in next week’s season finale. With Uli Latukefu once again taking the gauntlet as the eldest of the Young Rocks, the episode, titled “Good, Not Great”, covers several years of his University of Miami football career.

It really is Latukefu’s show tonight. As the article title suggests, Johnson’s family plays an integral role as always. Rocky Johnson (Joseph Lee Anderson), Ata Johnson (Stacey Leilua) and Lia Maivia (Ana Tuisila) are his number-one football fans — even if Ata is more concerned with sending a note to the mother of the quarterback that Johnson sacked, and Lia is more interested in rating team mascots.

By the end of the episode, football is almost out of Johnson’s life, but Tuisila gets to deliver some great lines about family that are as powerful as Mel Gibson’s rallying cries in Braveheart and as fierce as Robert DeNiro’s baseball speech in The Untouchables. If Johnson’s family delivered advice and support in real life that was half as inspirational as what was shown tonight, then it’s easier to see where he gets a lot of his drive.

Randall Park is back, which is always welcomed, interviewing Dwayne Johnson in 2032. Johnson is enjoying a glass of tequila, but for what must be a very good reason, he isn’t allowed to refer to it as his own brand of Teremana. Park and Johnson talk about past successes and failures, including Johnson (in the show’s fiction) being snubbed for the role of Pedro Cerrano in a reboot of Major League. I hope, in that timeline, that Dennis Haysbert still played the part.

Johnson is fully committed to his visions of football success, with a funny running bit of daydreaming a scene of Chris Berman announcing his place in the NFL draft — complete with clips of a young, early 90s Berman on TV and what must have been Berman lending his voice for some extra dialogue, or someone doing a mean Berman impression. It’s no spoiler to say that Johnson’s football career never panned out (he found success elsewhere, though, don’t worry), so as the episode progresses, Johnson’s dreams of being drafted become more and more muted and ultimately hopeless.

There’s no Coach Orgeron in this episode, as in real life he had taken a leave of absence from The University of Miami due to mounting personal problems (a restraining order had been issued against him, and he was arrested after engaging in a bar fight), so we meet coach Dennis Erickson. It’s Luke Hemsworth taking on that role, best known from TV’s Westworld and, though one wonders what he thinks of being famous for this, playing the role of his younger brother Chris Hemsworth’s Thor in a brief comedic bit in Thor: Ragnorok.

Erickson has visions for Johnson’s future, but they don’t include the starting string. While the coach applauds his work ethic and dedication, there’s not much that Johnson can do to stand out above teammates Warren Sapp and Ray Lewis, both destined for great things in football.

Still, Johnson keeps working. He’s up early, slapping his alarm clock at the first sound and starting his work-out. If you remember, Johnson actually peddled a phone app called “The Rock Clock”, which woke you up as early as it did him and did not feature a snooze button. Don’t bother checking — it’s no longer available. 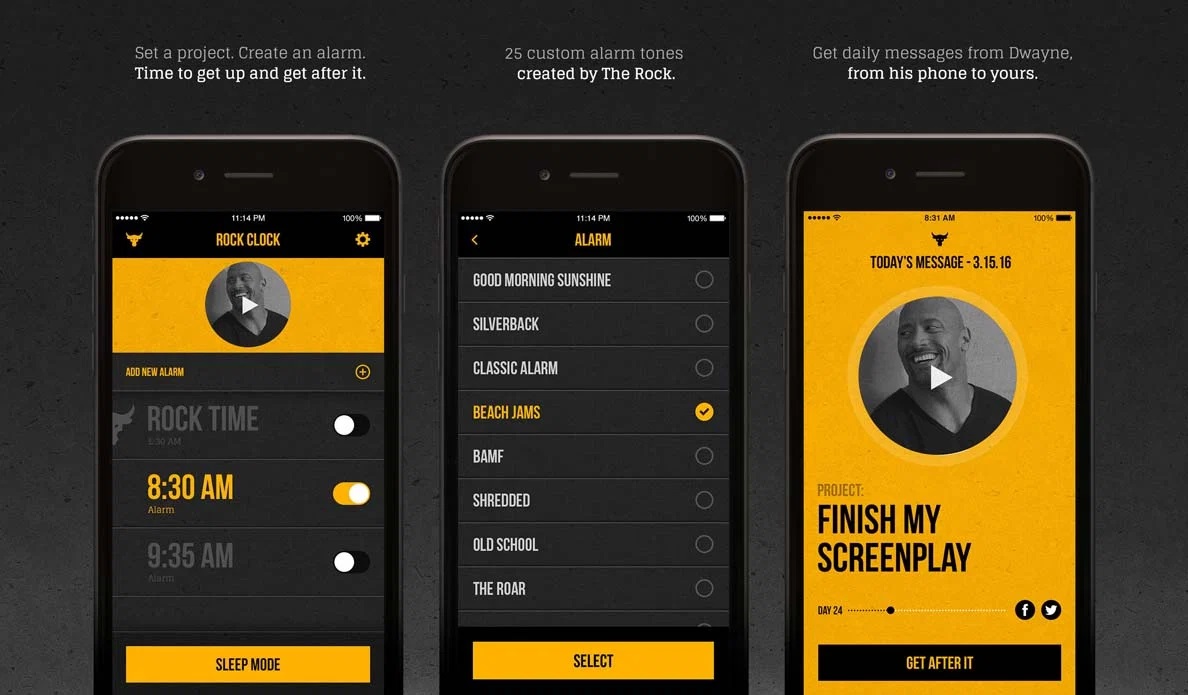 In this promotional poster for the Rock Clock app, you’ll see that you could wake up at the same time as The Rock, just so that you could get an earlier start on not accomplishing as much as he does.

We gain more insight into the big dreams of young Dwayne as he brushes off a teammate’s notion that some people are happy to be a middle-management type. It’s not really anything that we don’t already know about the famously hard-working Johnson, but the episode shows him keeping at his work routine as doggedly as ever despite the lack of playing time.

We do get some legit clips of Johnson’s Hurricane playing days, which was a cool thing to throw into the story, but by the end of the show, he’s left wondering what’s next.

In the best and most subtle storytelling moment of the whole series so far, Dwayne is sitting at ringside, watching Rocky do some wrestling training to pay for the bills, while Lia reminds her grandson that he’s a fighter and he’s bound for success. There he sits, just a few feet away from a wrestling ring, the very thing that will propel him to a success that perhaps he couldn’t even have envisioned, but that’s not where he is in life at this point.

For now, he gives Lia a kiss and walks away, still not giving up on training for a chance to make it to the NFL. It was a really nice bit of visual foreshadowing.

Not, of course, as fun as the foreshadowing of Johnson bringing a fan to Ata while she works in an oven of a telephone sales office, and hearing a giant, sweaty man named Carl stand up and ask why Ata gets a fan.

The actor playing Carl, a 6″4′ Australian actor named Craig Ingham, has a commanding presence, but all he gets for his trouble is a “Know your role and shut your mouth” from the future People’s Champion.

A review of an earlier episode surmised that the University of Miami had somewhat glossed over Dwayne Johnson’s time in their football program. In one sense, that would be totally understandable, as his future legacy was built upon what were relatively quiet days for him on the team. Thanks to the tribute paid by Johnson back to his days at the school, both in praise and in financial donations, it is noteworthy that the university dedicated a locker room in his name in 2013. It was part honour and part salesmanship, but firmly cemented the link between the school and the superstar. 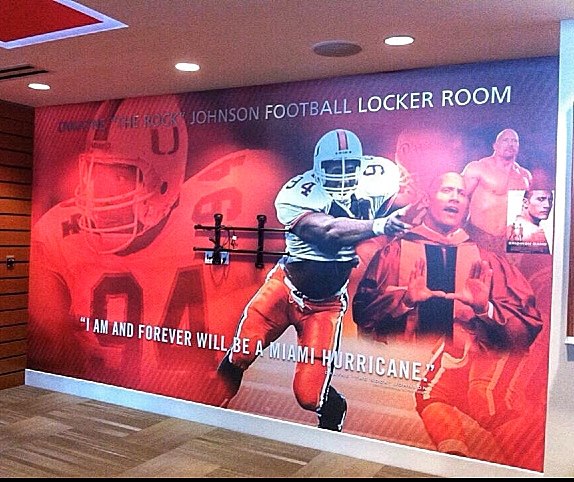 A snapshot of The Rock’s locker room in 2013. Photo: Dwayne Johnson on Facebook.

Be sure to check back next week for our review of the season finale.

TOP PHOTO: The Rock finally returns to the Hurricanes football field (from The University of Miami’s website).