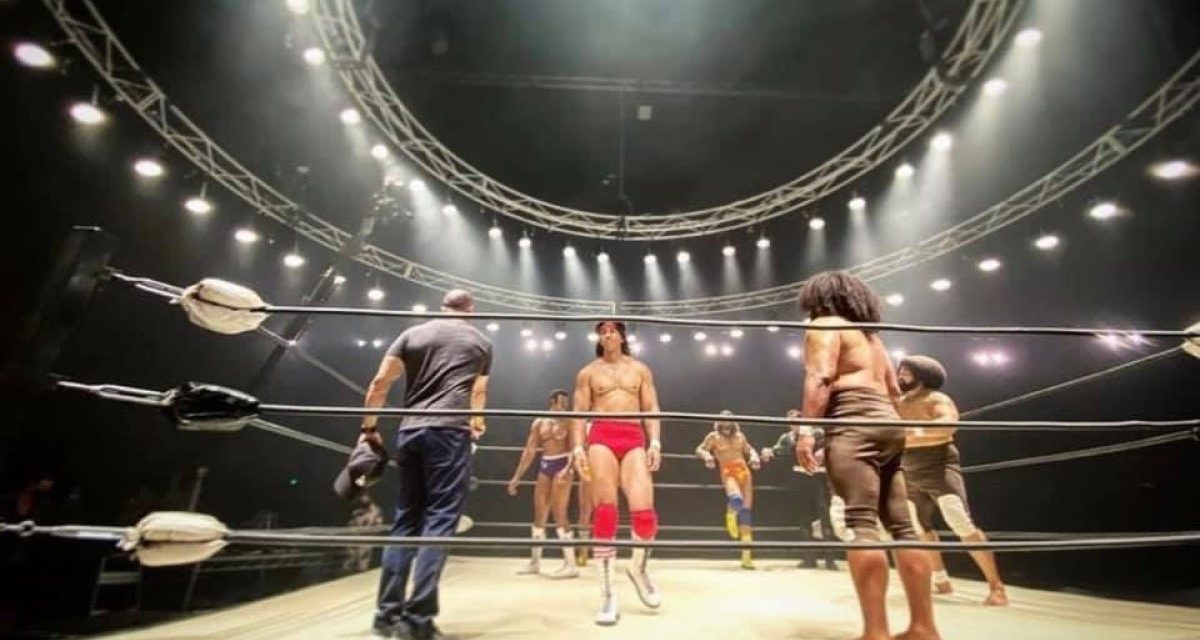 NBC’s Young Rock has tiptoed along a very fine line in its episodes, playing to both wrestling fans and a broad family viewership. If anything, and to its credit and success, the show has focused much less on wrestling than one might have first presumed would be the case. Out of the four timelines that the shows has been presenting, the focal points have been as much on football and family as on the squared circle.

Tonight’s episode, though, titled “My Day With André”, goes all in with a big battle royal scene and a continued storyline about Rocky Johnson (played by Joseph Lee Anderson) flirting with leaving Lia Maivia (played by Ana Tuisila) for a rival promotion.

We open with Dwayne Johnson in 2032, and he’s about to reveal his running mate in his bid to become the U.S. President. There’s no time for suspense, either, as we’re introduced to … General Monica Jackson. The underwhelmed looks on the faces of the reporters in the scene as Jackson, played by Rosario Dawson (most recently making noise playing Ahsoka Tano in The Mandalorian on Disney+) makes her way to the mic are probably echoed by people at home.

Nothing at all against Dawson as an actor, but in a semi-fictional world, you’d think the show would come up with a catchier character to be Vice-President. Stephanie McMahon, maybe? This is probably a tribute to Dawson working with Johnson in one of his first break-out hits: The Rundown, in 2003. 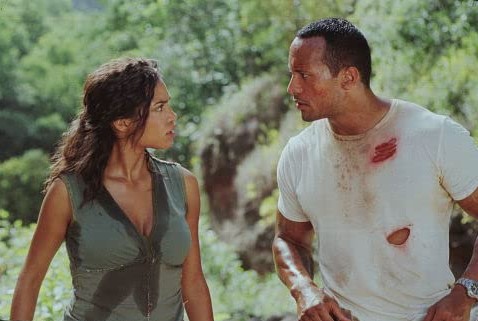 Dawson and a – ahem – Young Rock have a stare-down in The Rundown. Photo: IMDB

Semi-fictional is also the term of choice when describing the wrestling history as laid-down by Young Rock. As previously mentioned, the show tells the tale of Dwayne’s grandmother, Lia, taking over Polynesian Pro Wrestling after the death of Peter Maivia. As she prepares for a big battle royal match, she has had to deal with a rival promoter by the name of Greg Yao, played by Ronny Chieng (Crazy Rich Asians), moving in and stealing her wrestlers from her. From the cast of wrestling characters included in the show to the way Maivia is fighting for control of her promotion, there’s plenty to pick apart from a historical standpoint, but much to enjoy from an entertainment point of view.

As a preview of an upcoming interview article featuring Executive Producer Brian Gewirtz, he lays out some creative principles regarding the creation of the show. “You have to balance the fact that it’s not a documentary, it’s an entertainment sitcom on NBC,” Gewirtz says. “Dwayne’s whole thing was that there needs to be a basis of truth. There’s a basis of truth when Lia is dealing with a rival promoter, and she had to deal with talent leaving the territory.”

Greg Yao’s character most likely draws from the basis of truth that Lia did run into trouble with John Wakayama, a former employee who had left Polynesian Pro Wrestling to try and start his own promotion. Lia, along with two business partners, was charged with extortion as Wakayama claimed he was being financially harassed in an attempt to subvert his own fledgling business. Maivia was acquitted and, in a previous episode, Johnson promised that there was more to come of this story in the show.

It stands to reason that Greg Yao attempting to poach Lia’s wrestlers is the story that the creative team chose to use as a nod to the truth, without going fully down a documentary-style road. As a viewer, one is free to make of that storytelling decision what you will. 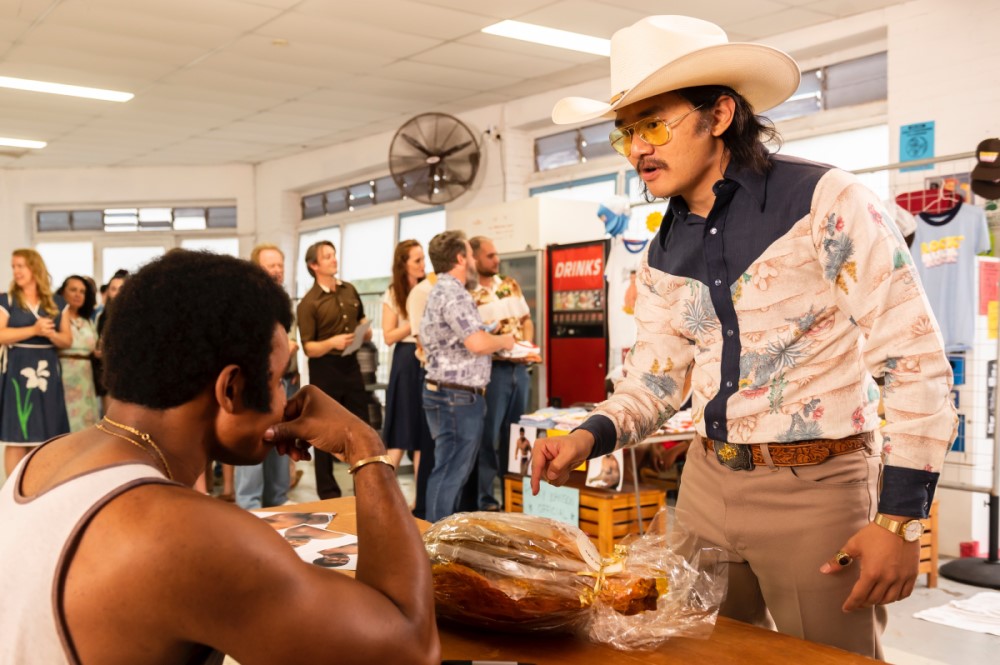 Ronny Chieng, as Yao, makes his move on Joseph Lee Anderson’s Rocky Johnson in the third episode of Young Rock.

As for the wrestling in this episode: it’s safe to say that this is what grappling fans have been waiting for. We’ve seen little comedic moments, most especially featuring André (played by Matt Willig) and The Iron Sheik (played by Brett Azar), and a truly “Sam the Eagle” moment from Sgt. Slaughter (played by Wayne Mattei) in tonight’s show — but it’s time to see these guys flex their wrestling chops. Having gone through crash-course training with Chavo Guerrero, Jr., the actors were presented in a style perfectly-suited to them, allowing them to show off some believable skills without asking more of them than they could offer.

The Iron Sheik bends Randy Savage (played by Kevin Makely) to his will in the Camel Clutch; André is mauled by more than a dozen wrestlers and rises to send them all flying; Savage himself flies off the top rope to deliver an elbow drop; and Rocky Johnson struts his shuffle. It’s a greatest hits package of a match, with quick cuts and a cool 4:3, grainy filter thrown in now and then to really make it a transformative experience. Honestly, in terms of offering a trip back through time, the battle royal invited the audience to sit back and envision that they were watching a match in 1982. Its excellence was in its simplicity.

As to that note about the main cast of wrestling characters chosen to populate the show’s story: of course Rocky and The Wild Samoans were going to be a part of this. Same with “Uncle André” and “Uncle Sheik”. Randy Savage has been praised by Johnson as a “childhood idol” of his. The wrestlers in this show are probably best described as, once again, Dwayne Johnson’s tip of the cap to wrestling history, without being restrained to history itself. 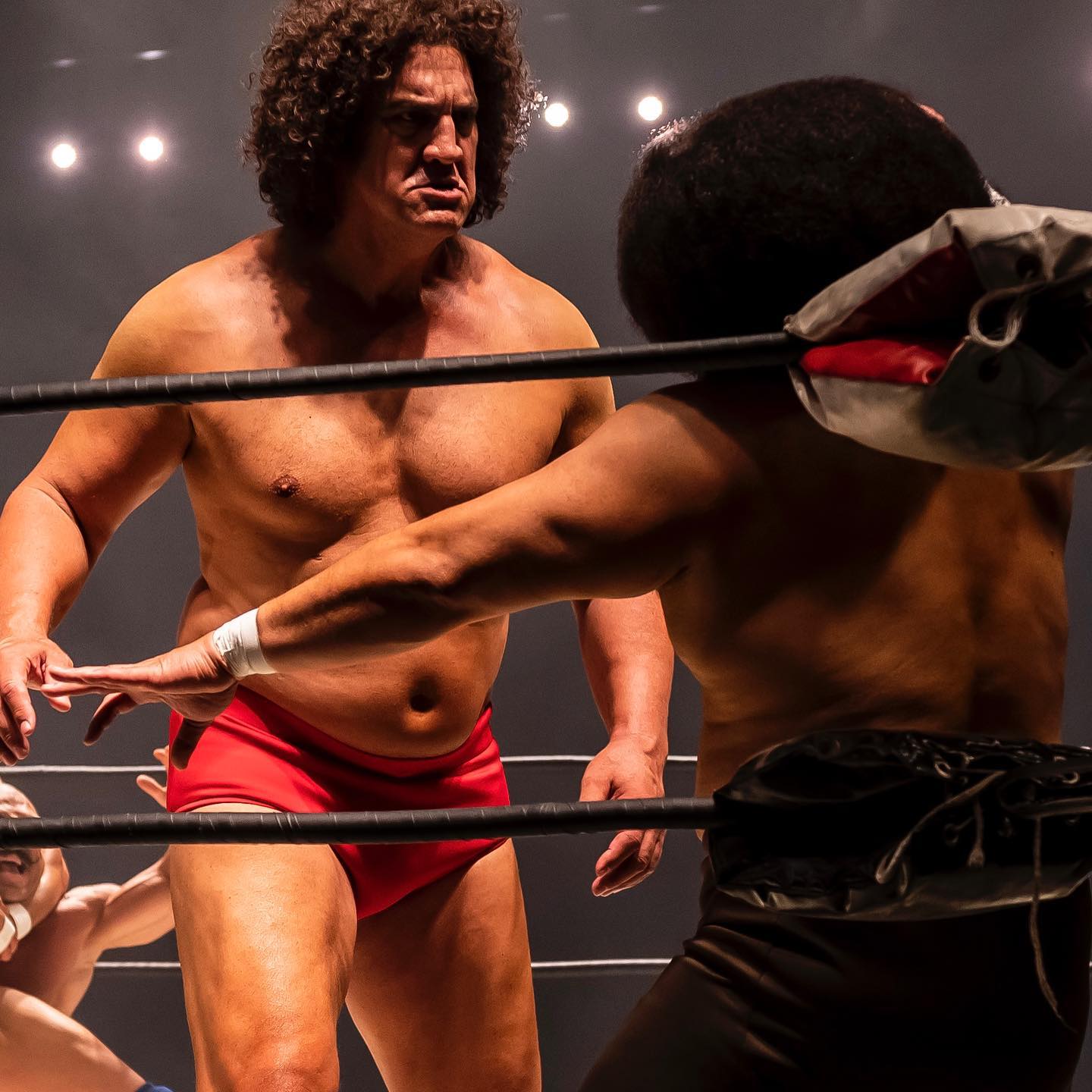 Matt Willig, as André, moves in for the kill in Young Rock.

This may turn a viewer off, and quite understandably so, if they’re looking for a wrestling timeline that stands up to scrutiny. If that’s not what you’re after, then there’s plenty to enjoy about the wrestling moments in the show. You’ll see Lia and Rocky stand off against one another over Yao’s offers to make him his number-one guy, and you’ll see Randy Savage skipping a planning meeting to be with his girlfriend Deborah — not Elizabeth. Presumably, this is meant to be Debbie Combs, a wrestler whom Savage dated while they both worked for Angelo Poffo’s International Championship Wrestling. Plus, you’ll see a screwjob — the ultimate tribute to any era of wrestling history.

There are still two other storylines to follow in this episode, which means that there’s once again an awful lot packed into less than half an hour of TV time. Ata (played by Stacey Leilua) is continuing her quest to get onto Star Search with her singing, but she runs into the realization that she’s not the only one, by far. In another sweet scene between Rocky and Ata, Rocky encourages her to write her own song for her audition. She comes up with a pretty good one.

We also get the story behind the title for the episode, as André takes Dewey out for an afternoon while everyone else is busy. Dewey wants to see E.T., but André takes him to a park instead and the two have some deep discussions. It’s great to hear André philosophizing about multi-dimensional universes. Eventually, they make it to E.T., and André can’t help but drop spoilers later on in the locker room (so I won’t spoil the scene for you here). Adrian Groulx really held his own as young Dewey tonight, too.

This episode captured a little bit of everything that Young Rock has to offer. Next time, it will likely be a return to Uli Latukefu’s uncanny portrayal of a Young Rock coming into his own, and about to change his destiny from football to fighting.