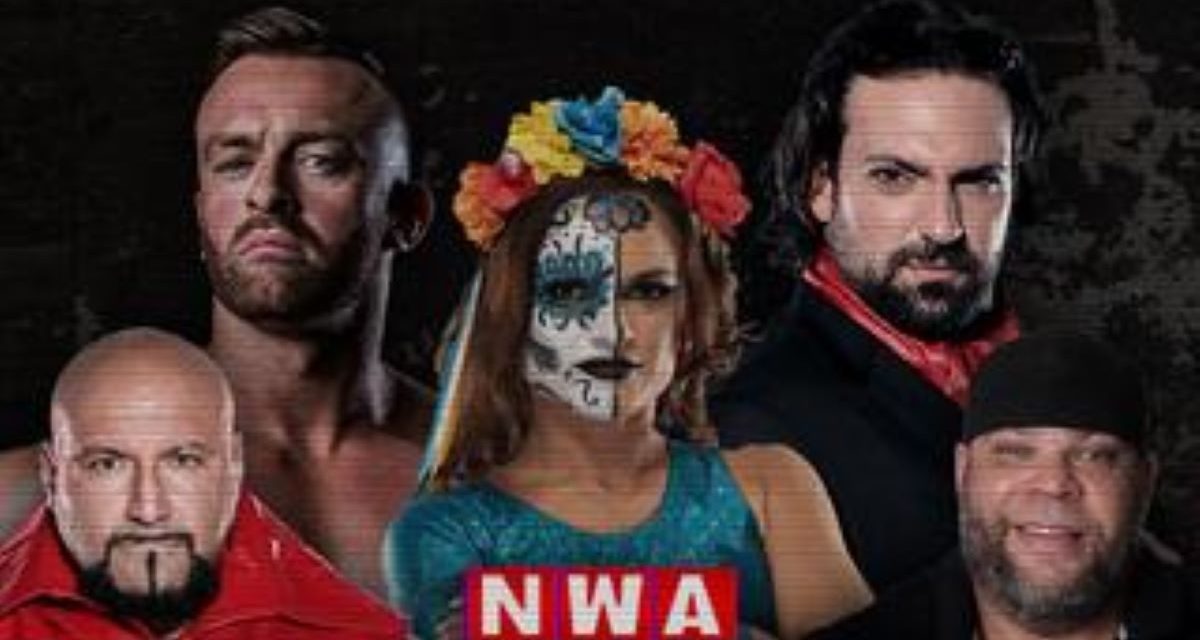 If you want to see some steaks sizzle, then you need to put them Into The Fire.  Once again, we are live from the GPB Studios in “Hotlanta, GA.”, according to your Emmy-Award winning ring commentator Joe Galli,  joined by Tim Storm and Velvet Sky.  Great matches coming up with Tyrus, Thunder Rosa and an NWA Television Title match with Da Pope and Fred Rosser. 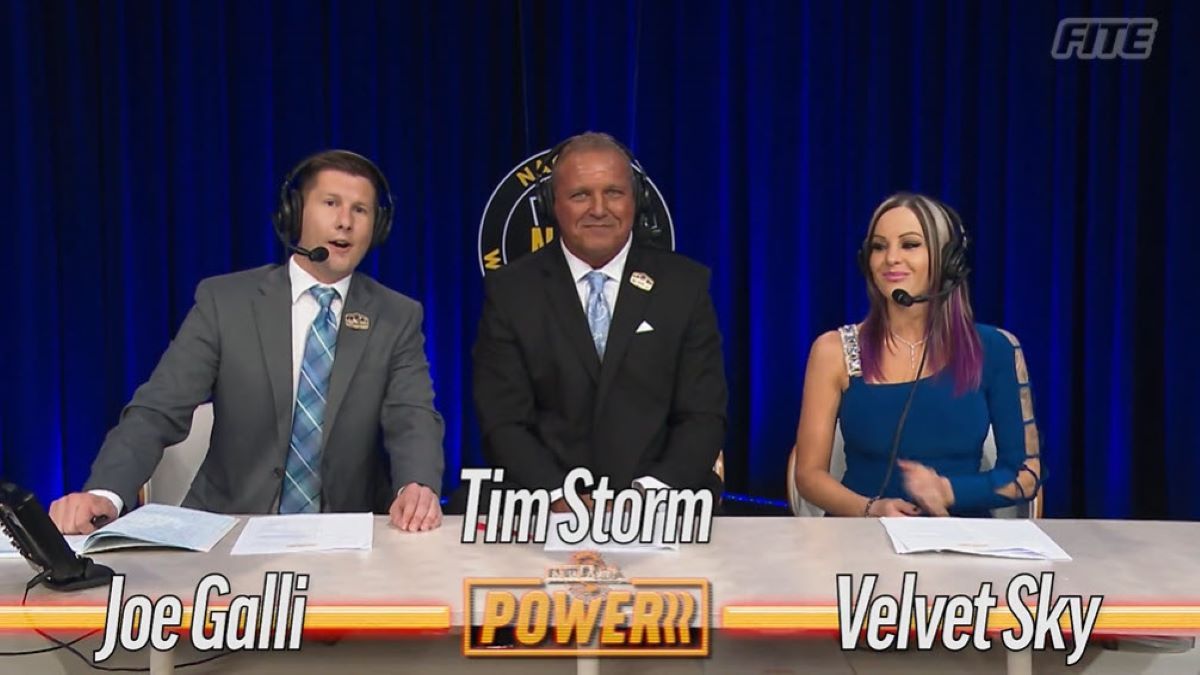 We first send it to Kyle Davis at the Podium with “The Real Worlds Heavyweight Champion”, Nick Aldis. He lets us know that he suffers from a condition known as winning. From the PPV & the Six Man tag, he just wins, like the NWA. Davis asks about Adonis’ actions the last couple of nights, and as Aldis start to wax eloquent the NWA National Champion Trevor Murdoch comes out. He can’t sit back and listen to Aldis’ horse s***, and he tells the champ to stop yammering and addresses Adonis.  Murdoch wants another match; no DQ and no count out. The rent is due and Murdoch is going to collect. Aldis takes offense at Murdoch’s interruption on his show, but chalks up to emotion. Aldis drops a little bon mot and remind Murdoch (and the fans) that they were trained by Harley Race, and advises the one rule Harley stressed.  Aldis asks Murdoch if he recalls.  Murdoch, in no mood whatsoever, asks the champ what’s the game.  Aldis then remind Murdoch:  never turn back on opponent. With that, Adonis blindsides Murdoch and rams him to the ring post and leaves the National champ in a heap.  Refs and medics tend to Murdoch, as the commentators process what has just happened.

“Ad Break” time with Austin Idol with his UniversalWrestlingCollege.com.  Honestly, if I didn’t have my MBA, I would pursue that.  Maybe there’s a PH.D in Kizarney I can add.  Hmmm.

We go backstage to May Valentine with the NWA tag champs Kratos and Aron Stevens, who seem to be on the same page. Stevens dedicates his career from here on out to Joseph Hudson’s memory, and wants to do right by him. 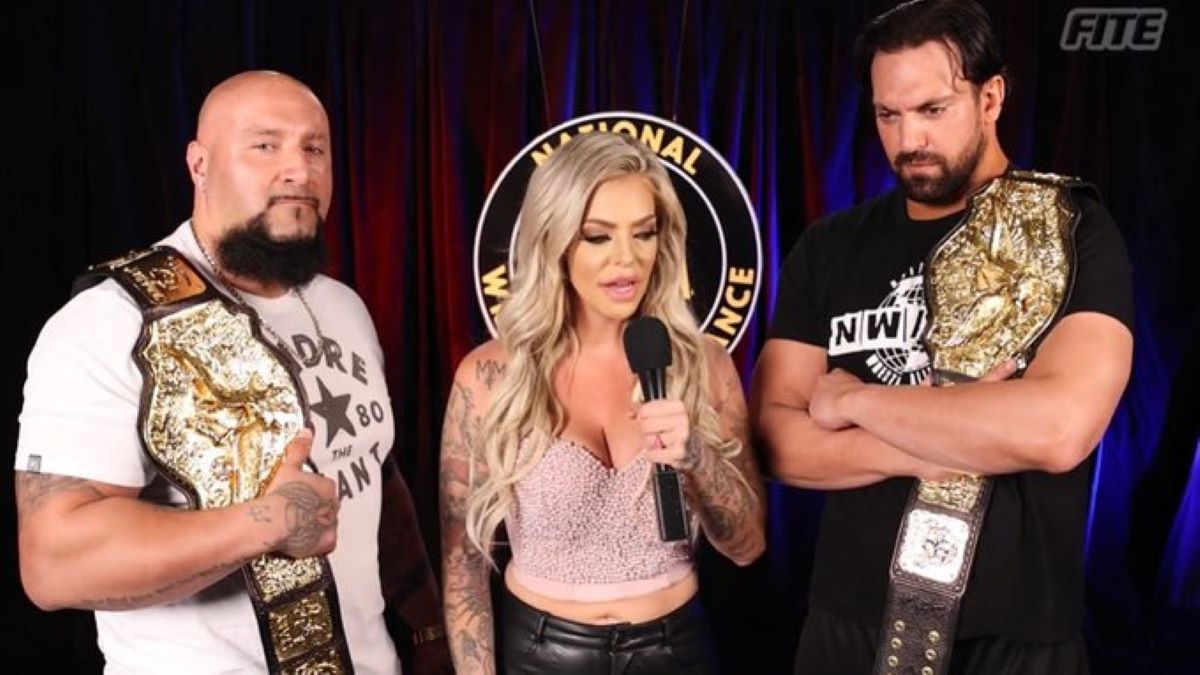 At that point, Sal Rinauro wanders in, and says he wants a tag shot. Stevens says anytime, and tells Sal to put on his big boy pants next week.  But now, let’s go to your First Match… 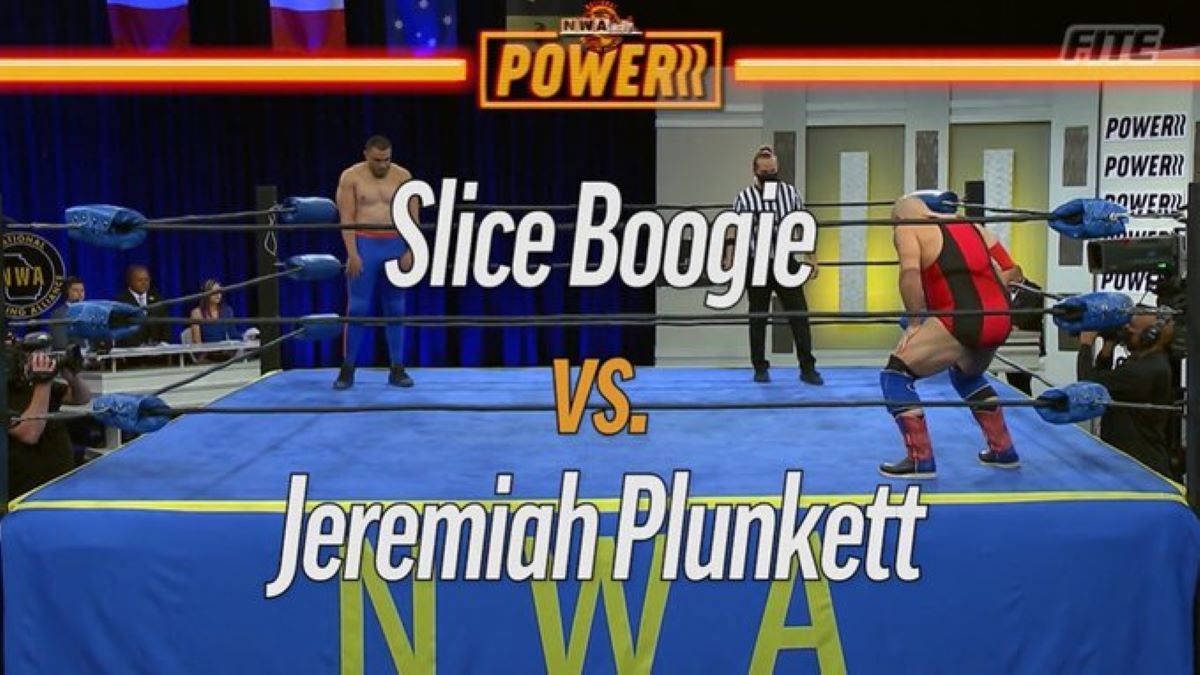 Slice is on a nice run, as he now faces the man from Tatertown, TN (which is all sorts of awesome.  Not quite Truth or Consequences, NM, but still…awesome!)  Match goes back and forth, and Plunkett takes it to the King of the Concrete Jungle, but it’s not long before Slice starts slugging away at Plunkett in the corner.  Slice shoots Plunkett to the ropes, and hits a springboard back elbow.  Into the corner again and Slice delivers a chop to the back, followed by a nasty face wash boot.  Back in the corner, Slice goes for a springboard elbow drop, and Plunkett ducks out.  Now Plunkett gets back with a stiff punch to the face and covers for a two count.  Plunkett (who reminds me a little of C.W. Anderson), keeps up the offense with a bodyslam and an elbow drop to Slice to cover, but gets a two count.  Plunkett then tries a sunset flip for a count of two, then an Anderson-esque spinebuster, but still a two count.  Next he gets Slice in a sleeper hold, who reverses it into a back body drop to cover for a two count.  Slice gets a springboard clothesline and a Dead Ass Driver (cradle piledriver) gets the 3 count over the Tatertown Titan.

Your Winner via Pinfall:  Slice Boogie

Back to commentary as they get ready for the next match…

Idol and Tyrus start making their way to the commentary booth, and idol then takes a seat next to Storm, as Sky gets the hell outta dodge.  I swear, Tim Storm next to Austin Idol reminds of that situation we’ve all been in. 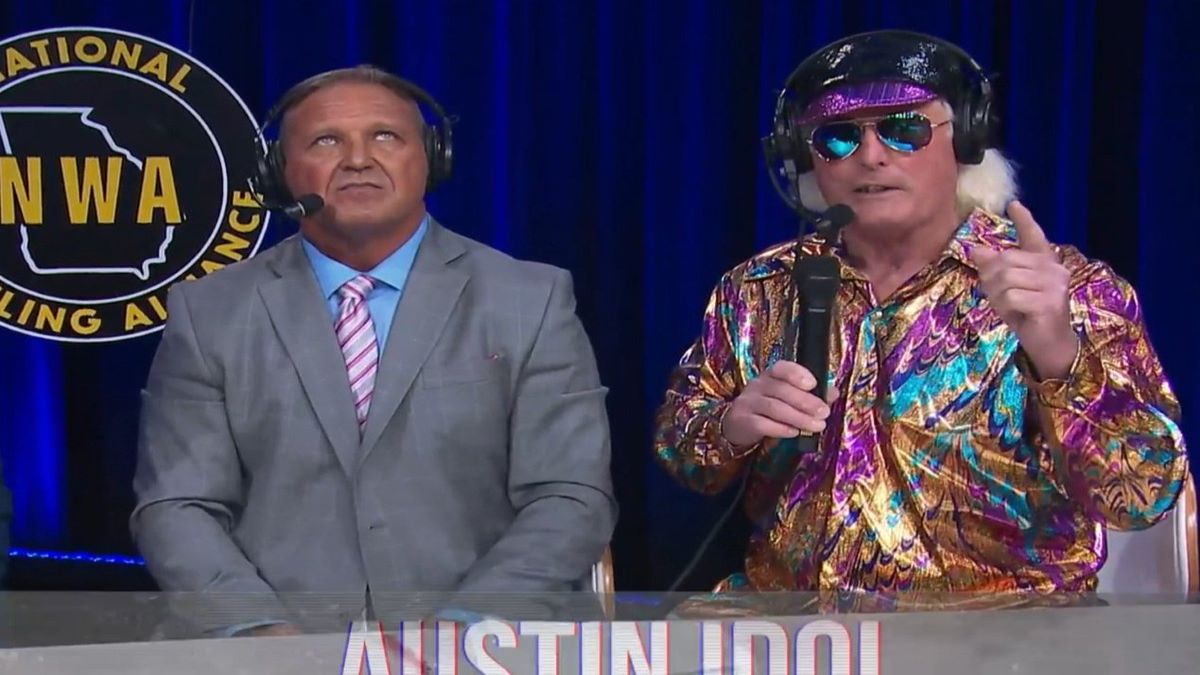 Ever been with that one guy?  You know that loud, obnoxious guy that you pray leaves as soon as possible?  I have.

But enough about my brother-in-law.

Let’s talk about the match in progress, such as it is.  As Idol proceeds to talk up Tyrus as a Man and a monster (a Man-ster, if you weeelll), Tyrus is making short work of Mims, whose offense does nothing to the newly christened Great American Smash.  The former Funkasaurus grabs Mims in the attempted crossbody and reverses to an unceremonious slam.  Ref counts for one, two… but Tyrus pulls up Mims, as he wants to toy around at this opponent.  Mims tries to fire back up by grabbing Tyrus’ beard into a jawbreaker, and head butts away at Tyrus’ thick cranium.  But Tyrus gets in a throat punch, followed by a massive overhead suplex to Mims.  Tyrus then goes for a corner splash, then a goozle to a choke slam (now dubbed “’Nuff Said” by Idol) and it’s an easy three count.

Your Winner via Pinfall:  Tyrus

We get the following notice pop up on the screen… 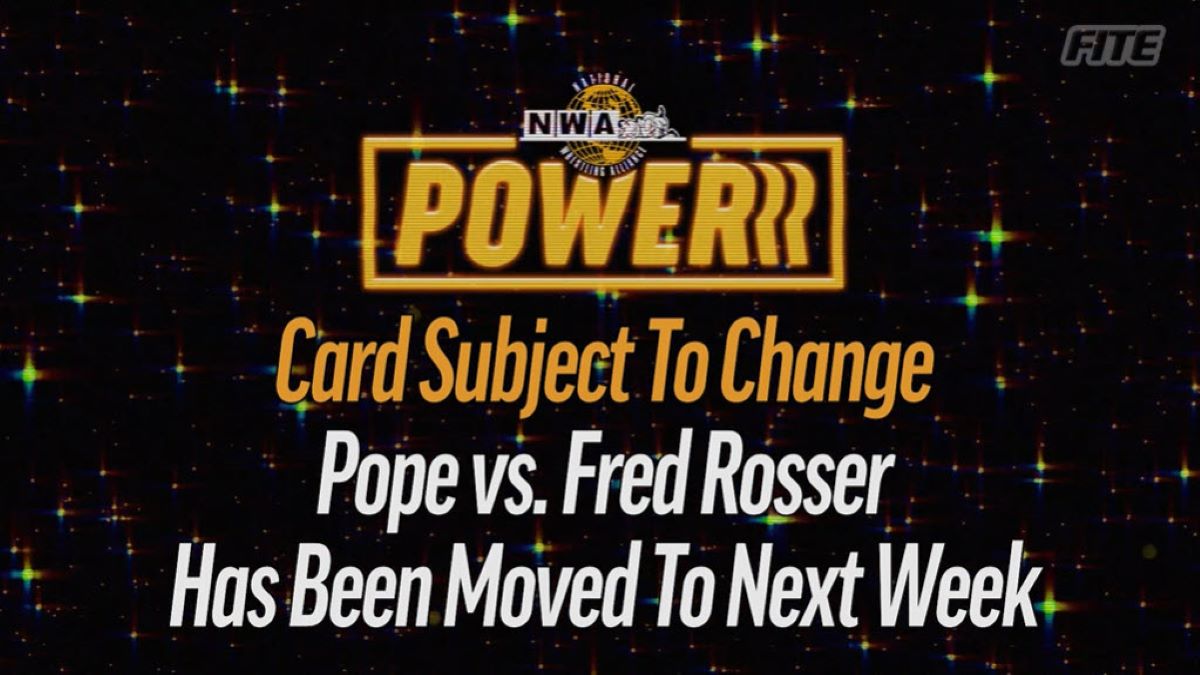 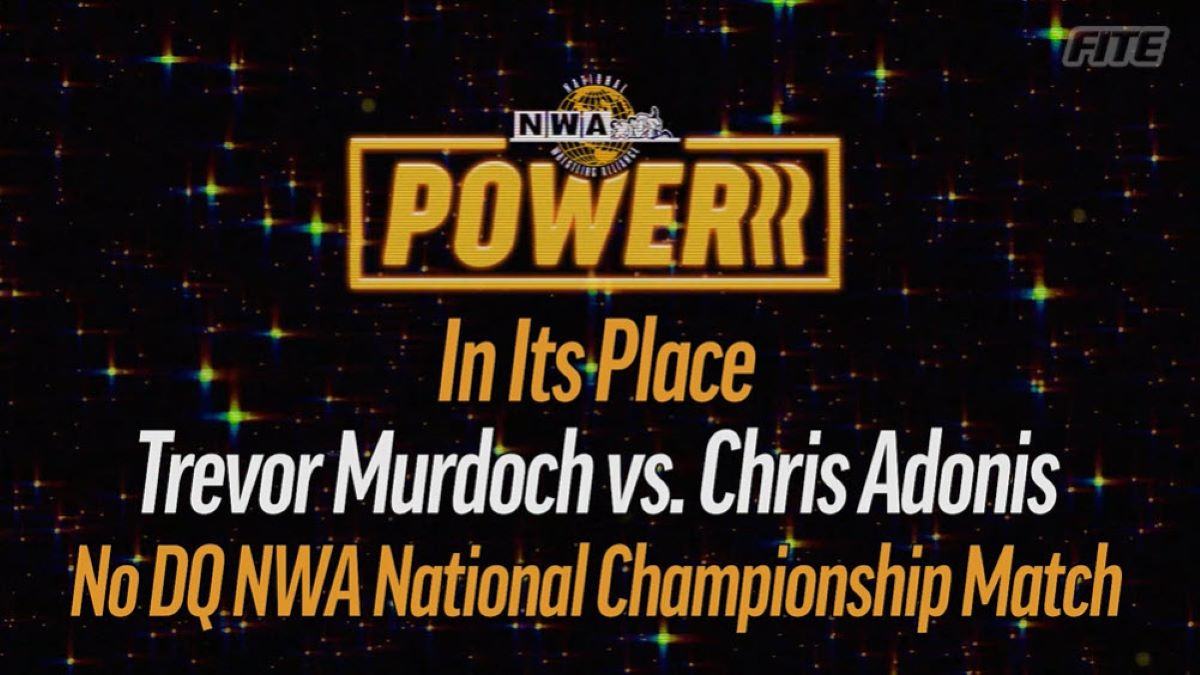 Back to the Podium with “Mr. No Days Off” Fred Rosser and the NWA Television Champion Da Pope.  Kyle Davis tries (unsuccessfully)to take control, but Rosser begins by talking smack on Pope not being ready for this match. Pope says he’ll always be ready, and it doesn’t matter how much time is on the clock for the Television match, Pope tells Rosser to get ready next week. 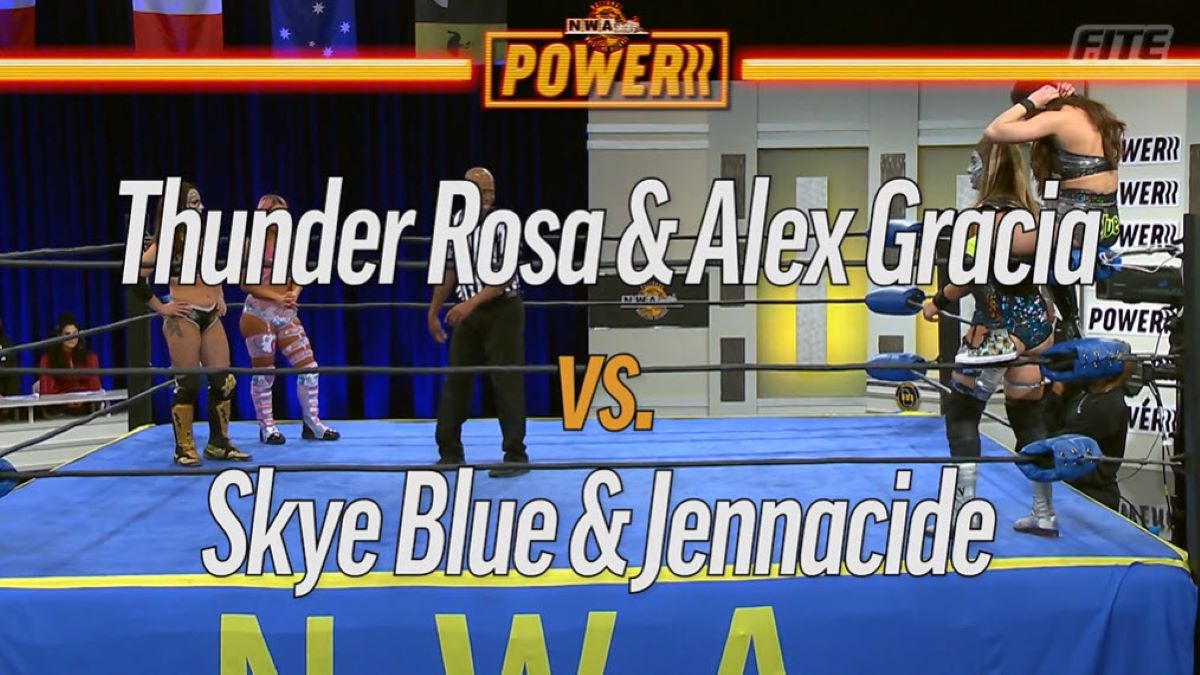 Skye and Rosa grapple to start, with some nice chain wrestling.  It’s Thunder Rosa outwrestling Skye, but Skye’s got some moves like a cartwheel elbow to the corner to Rosa.  It’s not enough as Rosa easily dominates, and tags in to Alex who chops away. Nice tag action with Rosa/Alex with double team action in the form of a short blockbuster and double dropkick to the head to Skye.   Back to Alex, whose shines in the limelight than she does in the (AEW) Dark.  But Jennacide comes in, and Ye Gods she is a force.  She no -sells Alex’s offense, and throws her around like a rag doll.  Tag back to Skye, as they work on isolating Gracia in the corner.  Skye back in but loses focus as Gracia nails a Shining Wizard, and manages the hot tag to Rosa and Rosa is a Latina en Fuegó.  She knocks Skye out of the ring, and has Jennacide in the corner.  Rosa rears back to the opposite corner, but …waitasec Kamille comes in and spears Rosa, and ref calls for the bell.

Your Winners via Disqualification:  Thunder Rosa and Alex Gracia

After the match, Melina steps up and smack talks Kamille, standing proudly in the ring admiring her handiwork. Then Kamille runs into Jennacide, and they stare eye to eye.  Yeah, I’d look forward to that match.

Back to commentary and now Nick Aldis joins at ringside. Storm acknowledges that they may not see eye to eye on everything, but concedes that Aldis is the champion.  Aldis returns the favor by thanking Storm for knowing his place finally, and I’m here to tell you that Tim Storm’s eye roll is priceless.  Like “History teacher listening to a student explain why he didn’t turn in his homework excuse B.S.” eye roll priceless.  But let’s now get to your Main Event…

Murdoch comes out in a neck brace, and tries to make a game attempt, but Adonis is manhandling Murdoch from the moment the bell rings.  Match goes outside and Adonis slams Murdoch to the concrete floor of the GPB Studios.  Murdoch sent back in by Adonis who covers, ref counts one.  Murdoch gets back up, but runs into a back elbow by Adonis.

It’s all Adonis who tugs at/chokes Murdoch with the neck brace before tearing it off.  Adonis covers for a two count.  The champ is reeling, and Adonis keeps wrenching at Murdoch’s neck.  This is just a preface as Adonis first cinches in a Masterlock to a full nelson slam.  He then adds insult to (literal) injury as he sinks in the in Masterlock, with Murdoch fading fast. Ref (in an old school move you don’t see anymore) checks arms once, twice…and a third time it falls, and the ref calls for the bell. 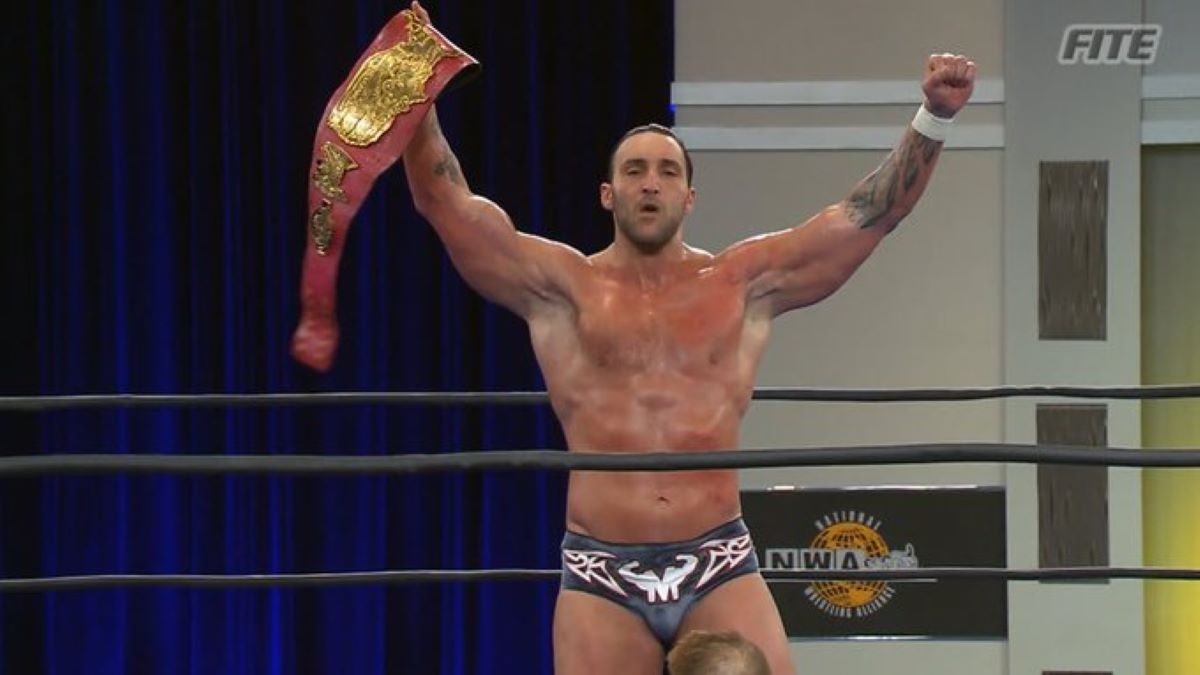 After the match, Adonis strides away with the newly acquired belt, and getting high fives from Strictly Business members Thom Latimer, Kamille, and Nick Aldis.  Meanwhile, medic staff and refs are checking in on Murdoch laying prone in the ring as we fade to black.

Solid show that was more about selling the sizzle of the stories itself.  But the matches were also good, as Slice Boogie shows lots of promise, and Tyrus just dominates.  Adonis’s win was inevitable, and now it’s about Murdoch trying to reclaim that National gold.  But will Adonis be all for himself…or is it Strictly Business?

Go to Fite.TV to catch up.  Until then, subscribe and see you in seven!