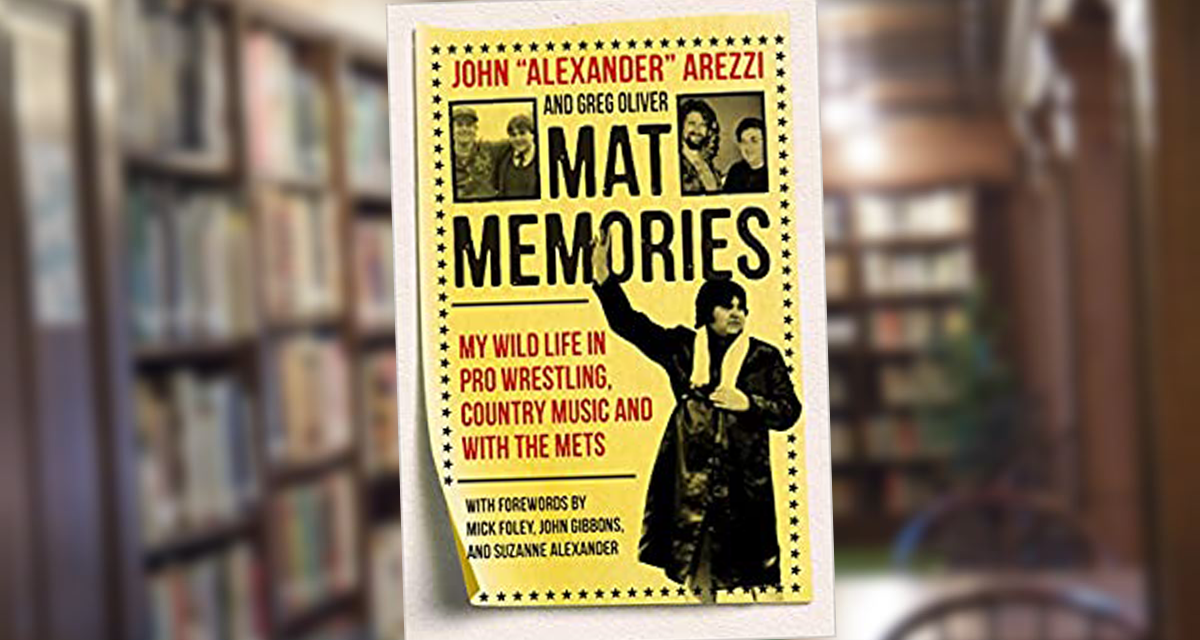 There are a lot of books about people involved in pro wrestling. There are a lot of books by people in the music industry. There are also many books written by people in the game of baseball. But Mat Memories: My Wild Life in Pro Wrestling, Country Music and With the Mets by John “Alexander” Arezzi and Greg Oliver and out April 6, 2021 from ECW Press, may be the first book that is written by someone who has more than dabbled in all three. The book even has three forewords with a representative from each industry: Mick Foley (wrestling), John Gibbons (baseball) and Suzanne Alexander (country music). 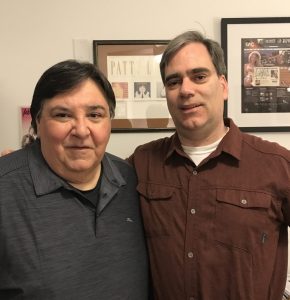 Arezzi has if anything else, lived one very colorful and interesting life, and I didn’t even mention his family brushes with New York organized crime! Arezzi grew up in New York City and quickly learned that in life he would have to think outside the box to get by in this world. Arezzi, as you will learn in this book, took that to an extreme. He would have brushes with celebrity his entire life, be it his dad hiring a teenage Tony Danza to work in his store to managing an upstart singer named Patty Loveless to wrestling Dusty Rhodes on TV.

Oliver, who is the author/co-author of 17 books and the producer of SlamWrestling.net, does an excellent job taking the tales of Arezzi’s life and transforming them into this riveting read. (Full disclosure: Arezzi is also an occasional contributor to Slam.) Readers will learn that Arezzi had two loves as a kid: pro wrestling and the New York Mets, and at some point in his life he would be involved in them both. His earliest forays into wrestling was as the president of the Freddie Blassie fan club. This post coupled with his excellent ability to take photos of wrestlers would open many doors for him in wrestling both in and out of the ring. When it comes to inside the ring, you will read how Arezzi, with no formal wrestling training but having good contacts in the World Wide Wrestling Federation (WWWF), was able to get in the ring for two matches on a TV taping that left him a little sore, but gave him a great story to write for The Ring Wrestling magazine.

But this book is not just a pro wrestling autobiography. Arezzi would take his love of baseball and the New York Mets to a front office job with the minor league franchise in Shelby, NC. Life in the minor leagues is tough on the players and coaches, but when you’re a poorly paid front office employee, it can be even worse. It was during this time, while attending a show at a local rock club that Arezzi first saw and met Loveless, long before she would achieve success in the world of country music. Arezzi would move on to Raleigh, NC (where he would be managing local rock acts which I myself would come in contact with nearly a decade later), before returning to the New York area. His fortune in the music industry never quite clicked as it did with Loveless. Arezzi confessed that he would have a near miss opportunity with an up-and-coming pop group called New Kids on The Block that was not be be. 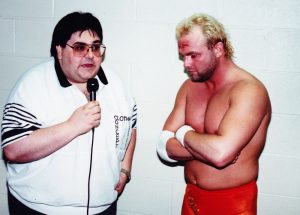 Arezzi with Eddie Gilbert in 1991.

Arezzi would return to pro wrestling with his radio show, Pro Wrestling Spotlight, that would see him interview a who’s who of wrestling.  He would be at the forefront of everything that happened from the World Wrestling Federation (WWF, now World Wrestling Entertainment or WWE) steroid scandal to the promotion’s sex scandal involving young ring boys. Whatever was happening in pro wrestling, Arezzi’s radio show was covering the news and breaking new leads. He would appear on national talk shows and soon became an enemy of Vince McMahon and the WWF.  His notoriety was so strong that a local video store owner named Vince Russo wanted to be part of it and soon convinced Arezzi to let him be involved. Their partnership was short but not short of fireworks. It must be asked: was Arrezi (a.k.a. John Alexander at this time as a means of distancing himself from his past association with pro wrestling) responsible for Russo’s place in pro wrestling history and also for Jim Cornette’s subsequent angry rants about Russo??

This book takes you through Arezzi’s life where he has a knack for being at the right place at the right time. Be it in country music and chance meetings with upcoming stars like Kelsea Ballerini and Sarah Darling, or being on the forefront of  pro wrestling talk shows and fan fests. Arezzi undoubtedly has a personality that has allowed him to excel in just about everything he has been involved in. His sales ability propelled him into a music career and allowed his wrestling radio show to become as successful as it was. Oliver meticulously took all the interesting parts of Arezzi’s life and put them together into a very compelling and enjoyable to read book. It should be noted that Oliver did not just want to write another wrestling autobiography, but instead the story of a man who was ahead of his time in wrestling and music and who continues to add to his story today. While baseball and the New York Mets may have been his first love, wrestling and music fans are lucky to have what baseball lost. 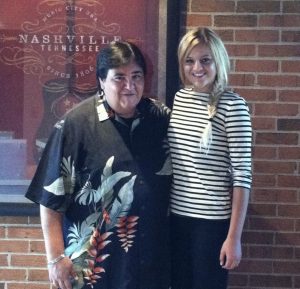 Caption from the book: Me (Arezzi) with Kelsea Ballerini, before she became a mega-star.

If you’re looking to read an autobiography about a man who has had a multifaceted life that is also funny, honest and takes the reader through his ups and downs in life, then this book will more than keep your interest. I thank both Arezzi and Oliver for taking me on this journey.

EDITOR’S NOTE: There will be a discussion about the release of Mat Memories: My Wild Life in Pro Wrestling, Country Music and with the Mets on today’s episode of Pro Wrestling Spotlight LIVE hosted by Arezzi at 6 p.m. Eastern. You can watch the show via its Facebook group.