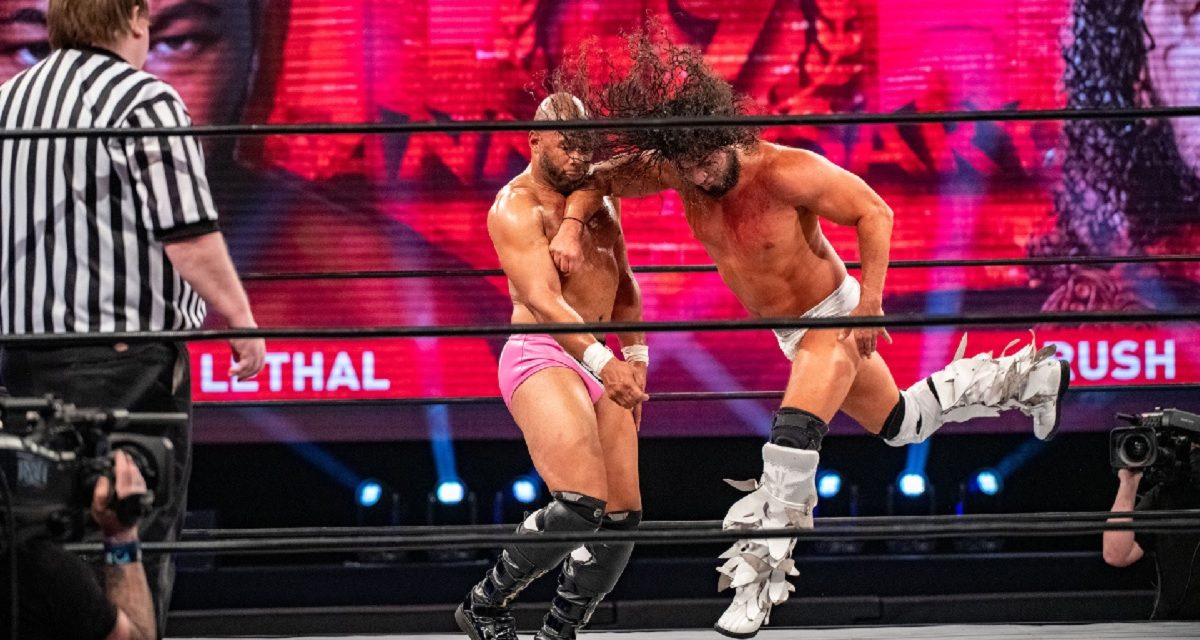 It has been a long time since I’ve done a pay-per-view or show review for Slam Wrestling. With Ring of Honor’s March 26th 19th Anniversary Show, I dusted off my old reviewer outfit and sat down for what was an entertaining three hours of excellent wrestling.

One of ROH’s biggest assets over its history has been its rabid and vocal fanbase. Whether being live in a venue or watching on a VHS tape (remember those?) the energy created by the audience rivaled that of ECW. Being in an empty arena with no live or “enhanced” crowd, chants, or pops adds a whole different challenge to the roster. Instead, the talent had to tell the stories in the ring, and it paid off.

The main storyline was the ongoing feud between La Faccion Ingobernable, lead by ROH champion RUSH, and The Foundation, lead by ROH icon Jay Lethal. The two clashed in the main event over the belt in their first one-on-one encounter. There was a lot of great stuff on the card to follow, and the two men put on a fantastic bout. After some solid back and forth wrestling, RUSH dominated the challenger, beating him around ringside and repeatedly kicking him in the face in the corner. Lethal came back with an elbow and locked on the figure four, but RUSH made it to the ropes. A second figure four saw LFI’s Kenny King and Bestia interfere. The Foundation’s Tracy Williams and Rhett Titus brawled with LFI at ringside. A lethal injection by the challenger nearly saw the title change hands, but RUSH came back with two El Toro dropkicks in the corner to walk out as champion.

After the bout Brody King called out RUSH and announced he had a family of his own. Tony Deppen, Chris Dickinson and ROH legend Homicide attacked LFI and the Foundation, standing tall as the show went to black.

After a preshow that saw Brian Johnson win a fatal four-way over Danhausen, LSG and Eli Isom and Shane Taylor Promotions successfully defend the six-man titles against The Mexisquad, the official PPV kicked off with a fantastic video package looking back at the promotion’s history.

An injury took TV champion Dragon Lee out of the show, and King would replace him in both this match and the later tag team title match. King was not happy about having to defend the title. Some mat work early on until Williams ramped things up with a top turnbuckle DDT, discus lariat, and a Spicoli driver. Kings manager Amy Rose tried to distract the referee, but a piledriver crowned Williams as the new champion.

The Briscoes are ROH. There from the start, and it is crazy to remember back to my first in person ROH show in 2004 and seeing a 19-year-old Mark looking entirely different than the 36 year old version. Another short but hard-hitting affair that saw the two trade fisticuffs early on. Although there were some moves like a superplex by Gordon and a blockbuster on the apron by Briscoe, this was very much a fight. Mark brought a chair into the ring, but Flip hit a low blow while the ref was dealing with the chair, and put Briscoe away with the Flipvine.

Both men have an amateur background and showed it off early on, as well as trying to suplex each other. Castle worked over Woods on the outside, until Josh came back with a powerbomb on the apron. Young tried to give Woods a chair, but Josh refused. Back in the ring, Woods had the match won but the referee was down. Woods rolled up Castle, who kicked him into the ropes. Young turned on Woods, smashing him with a chair, and giving Castle the win.

It still astounds me how WWE dropped the ball with EC3, and he’s been working really hard to erase the stink of his main roster bomb. The grudge match started slow, with Carter keeping Briscoe down on the mat and repeatedly stopping his momentum, until EC3 ramped things up with a powerbomb and TKO. Briscoe turned things around and hit a dive outside the ring, tweaking his knee. EC3 regained control working on the knee and hitting an Olympic slam and a brainbuster. Briscoe rallied with a series of neckbreakers and Death Valley drivers. A lariat and punches seemed to have Ethan out on his feet, as he offered his hand to Briscoe, who accepted and pulled him into a Jay-Driller for the win.

This match was added to the main show after the trio had a falling out in the six-man tag match on the preshow. Of all of the matches on the show, this one felt the lack of crowd. There were so many “holy s—” moments and mindblowing moves that would have deserved a “this is awesome” chant. It was impossible to really cover, so I sat back and enjoyed, and look forward to watching it again just to see all of the things that blurred by. Bandido hit some kind of rebound German suplex on Horus to get the pin.

This match suffered for me as a reviewer based on not following the storylines in the company – something I’m going to remedy since the weekly TV is available for free in Canada on the FITE ap, and I am clearly missing out. The pretaped fight took place at the Fall River, Mass., Police Athletic League, where the two first met early in their careers. The two brawled around the building and into a ring set up, where Taven missed a dive and crashed into a ladder against the wall. Chairs, dressers, and other plunder was used to batter each other until they ended back on the balcony, where former WWE developmental talent Bill Carr pushed them off through tables below. Afterwards, Carr carried Vincent off. Carr was not named, so it remains to be seen what happens next.

Quinn McKay introduced Maria Kanellis-Bennett, who announced a tournament to crown a new women’s champion this summer. Angelina Love and Mandy Leon came out, words were exchanged, and a match between Love and Leon was announced for a future episode of ROH TV.

Speaking of WWE mistakes, how in the hell did Dak Draper ever get released? The man immediately caught my attention, and the battle with Gresham made me a fan of both men. An incredible match that featured a twist on the smaller man (Gresham at 5’4”) and larger man (Draper at 6’5”) that kept you glued to the screen.

Early on Gresham used up his three rope breaks, and I fully expected Draper to walk out as champion as he dominated. However Draper had to use his rope breaks in quick succession, stopping a pinfall twice and the anklelock. Draper continued to overpower the champion, including an amazing sit out superbomb that somehow didn’t get a 3, and an over the rope superplex showing his power. Gresham, who had tried to hobble his giant foe throughout the match, leading to the challengers knee buckling during a stretch muffler attempt. Gresham dove onto Draper on the outside and locked in a sleeper. Draper fought into the ring, but eventually passed out in the ropes. Under pure wrestling rules once the rope breaks are gone, then being in the ropes is legal, and Gresham logged another successful title defense. As a member of the Foundation, that meant that the Pure and TV titles were in the group, with members having shots at the tag and world titles to try and capture all of the gold.

Would the Foundation make it three for three? Would King avenge his loss to Williams earlier in the night? The match saw former All Night Express partners Titus and King fight early on. For whatever reason this match just didn’t seem to click, despite the efforts of everyone involved. At one point Williams had King in a Texas Cloverleaf and Titus had Bestia in a single crab, but there wasn’t a submission. The finish seemed weird, as Bestia demanded Rose bring in a chair. He then just tossed it down. Titus dropkicked Bestia into the ropes, and kind of but not really locked in a full nelson while sitting on Bestia’s back for the submission.

After the match, Amy Rose was fired by King, and speared be Bestia.

As a lapsed fan who once followed ROH religiously from 2004 – 2010, it was interesting to see the product now compared to then.  As always, there is a lot of talent that are still the heart of what has made Ring of Honor survive for 19 years.

I’m looking forward to seeing future shows, especially with fans at them.