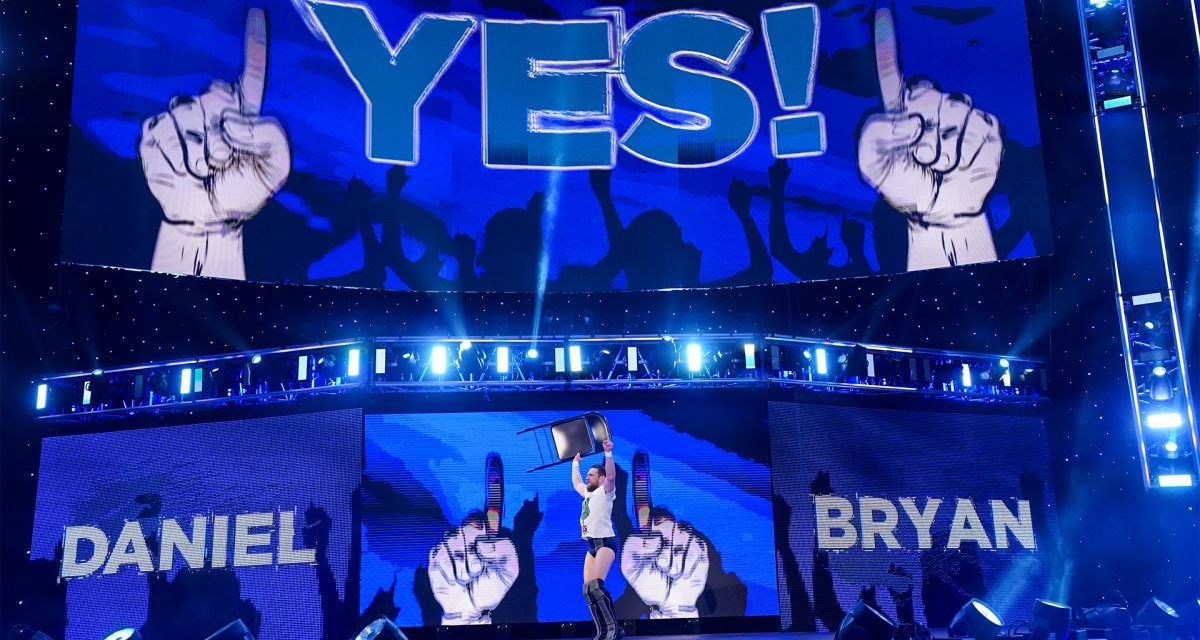 Daniel Bryan brings out a chair and a mic to start off the show. He reminds everyone that Roman tapped out at Fastlane, which the champ has apparently never done. Daniel also says that he should be Universal Champion now, but Edge messed it up for him. He says he’s ready to earn a Universal Title shot all over again, and he won’t leave the ring until he gets it tonight. He sits down on the chair he brought out and stares at the entrance ramp, barely even blinking.

We go to commercial, and when we come back, Bryan is still sitting in the ring. Adam Pearce finally comes out and tells Bryan he can’t get him a shot. Bryan reminds him that Roman tapped on Sunday, but Pearce says the referee’s decision is final. Bryan says that Edge VS Roman Reigns should happen on Night 1 of WrestleMania, and Bryan should face the winner of that match on Night 2 of WrestleMania.

Edge comes out, smacks the mic out of Pearce’s hand, and goes to the ring and grabs a mic himself. Edge compares Bryan’s road to his own, saying that he earned his match by winning the Rumble, and all Bryan has done is lose twice to Roman. He says that Bryan doesn’t deserve anything, and Bryan attacks him, but Edge fights back with a spear and a chair shot.

Roman Reigns sits in his comfy chair backstage, and tells Jey Uso and Paul Heyman to fetch him Adam Pearce, and use force if they have to.

They have matching pants! Nakamura starts off fast with a knee and some Good Vibrations in the corner, before delivering 3 knees, one with Rollins on the turnbuckles, another with him on the apron, and another off the apron onto Rollins’ neck as we go to commercial.

When we come back, Rollins is hitting Shinsuke with a slingblade for 2. Rollins gets frustrated and pins Nakamura again, but he only gets another 2. Nakamura fights back with a single leg dropkick and a fast paced, devastating series of strikes. He stacks Rollins on the ropes and delivers an axe kick, following it up with a sliding knee. He goes for an attack in the corner, but Rollins tries for a kick. Nakamura catches the kick, stacks Rollins on the middle rope, and delivers a sliding German suplex for 2. 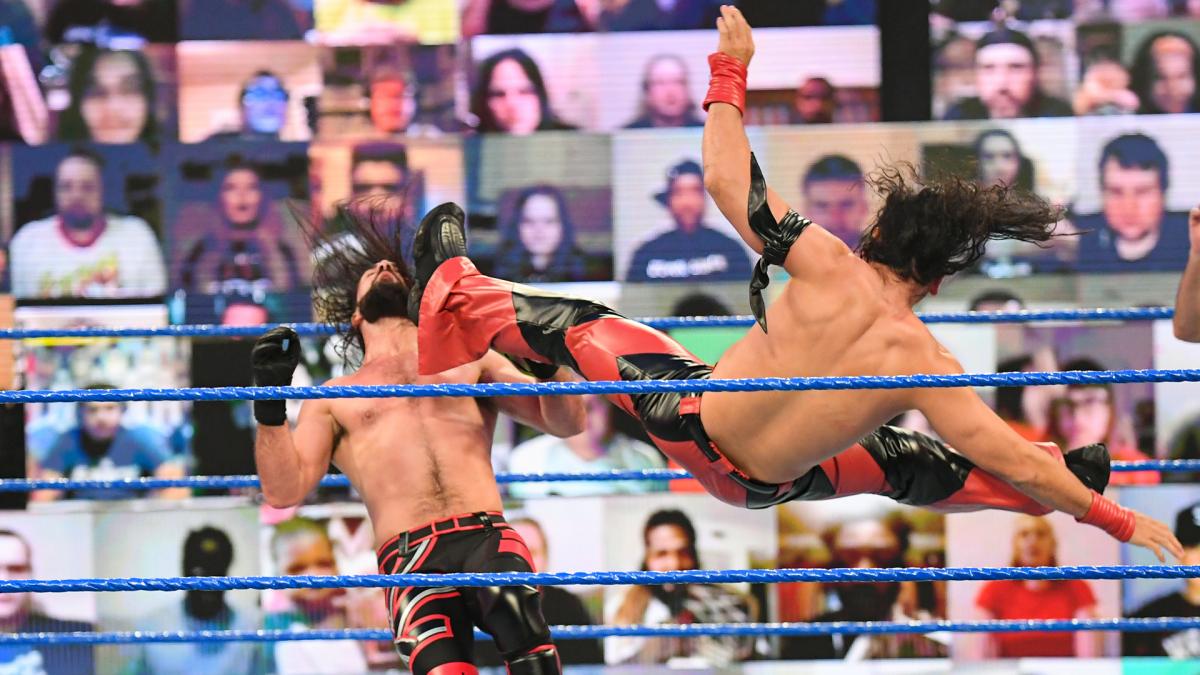 I could watch these two wrestle all day. Photo: WWE

After the match, Rollins looks to hurt Nakamura more, but Cesaro comes out and drops Rollins with some uppercuts. He looks for the Swing, but Rollins gets away and stumbles to the entrance ramp to escape the Swiss Cyborg.

Kayla Braxton interviews an angry Seth Rollins, who says that he challenges Cesaro to a match and WrestleMania. He says he’s going to teach Rollins a lesson in respect, and that he’ll never be Swung by Cesaro again. Cesaro attacks him and gives him a Swing, saying that he accepts his challenge.

Otis starts off against Dawkins, who immediately tags in Ford to deliver a double dropkick to the big man. Ford tries to leapfrog, but Otis catches him and slams him. Otis tags in Gable, who goes after the left leg of Ford. Ford goes for a sunset flip, but Gable catches him with a Northern Lights suplex for 2. He tags in Apollo, who strikes with a back elbow for 2. Ford gets out of a suplex attempt and hits Apollo with an enziguri.

Ford tags in Big E and Apollo tags in Gable, and the Intercontinental Champion tosses the smaller man around the ring with belly-to-belly suplexes. Big E delivers the Big Splash and looks for the Big Ending, but Gable reverses it into a submission. Big E escapes, and Gable goes for an attack in the corner, but Big E hits him with a uranage. Apollo breaks up the pin, Dawkins comes in and hits him with a right hand, Otis and Gable deliver a discus clothesline/German suplex combo to Dawkins, and Ford sends Otis outside with an enziguri.

Apollo tags himself in as Ford sends Gable to the outside before diving onto everyone on the outside with a swanton. Apollo grabs Big E and delivers an Olympic Slam to get the win. 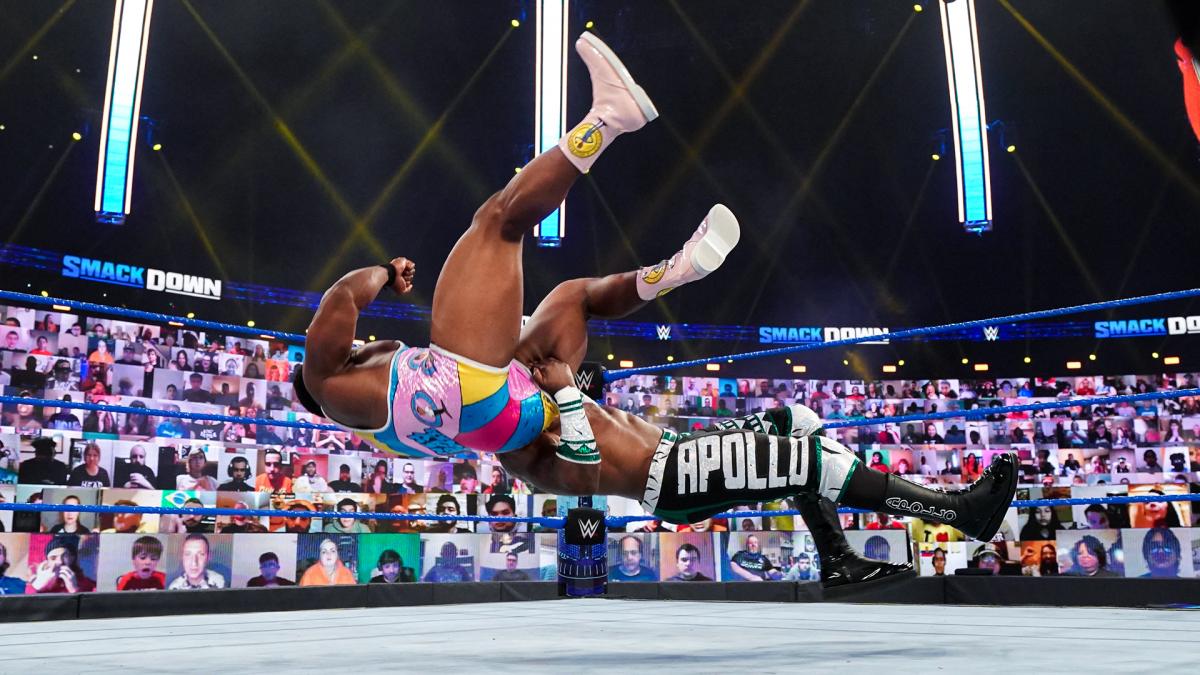 I feel like the real brutal part of this move is the thigh pinch. Photo: WWE

Edge stops Adam Pearce and asks him what he’s going to do in regards to the Universal Title situation. Pearce tells him the same thing he told Roman, that he’ll make his decision at the end of the night. Edge tells him that he better make the right decision, or else.

Kevin Owens hosts the K.O. Show, and he tells Sami to come out and answer his question. Sami comes out and assumes that Owens’ question is “Can I still be a part of your documentary?” Sami says that the answer is yes, and that next week, He’ll be having a red carpet event for the premiere of his documentary trailer, and that Logan Paul will be in attendance. I’m disgusted, and that’s all I have to say at this point. Simply disgusted.

Kevin Owens says he doesn’t care about any of that, he only wants his answer. He asks him if he wants to face him at WrestleMania, and Sami says yes. Owens is satisfied and attacks Sami, hitting him with a Stunner.

Daniel Bryan approaches Adam Pearce backstage and tells him to make the right decision, like he hasn’t seen both Edge and Roman say the same thing.

Belair goes right to work with a dropkick and some spears in the corner, before tackling Natalya out of the ring. She comes back into the ring, and Belair beats her down. Natalya delivers a slam and looks for a basement dropkick, but Belair dodges it and pins her for 2. The EST of WWE looks for an attack from the top, but Sasha Banks makes her entrance, and Tamina uses the distraction to superkick Belair as we go to commercial.

When we come back, Natalya has Belair in a surfboard with Banks on commentary. Belair fights out and fights back with a powerbomb attempt, but Natalya reverses it into a hurricanrana for 2. Natalya looks for a Tornado DDT, but Belair turns it into a Northern Lights suplex. The EST of WWE continues the assault with a dropkick and a spinebuster for 2. She delivers a springboard standing moonsault for 2 and avoids the Sharpshooter, but Natalya delivers a strong discus clothesline for 2. 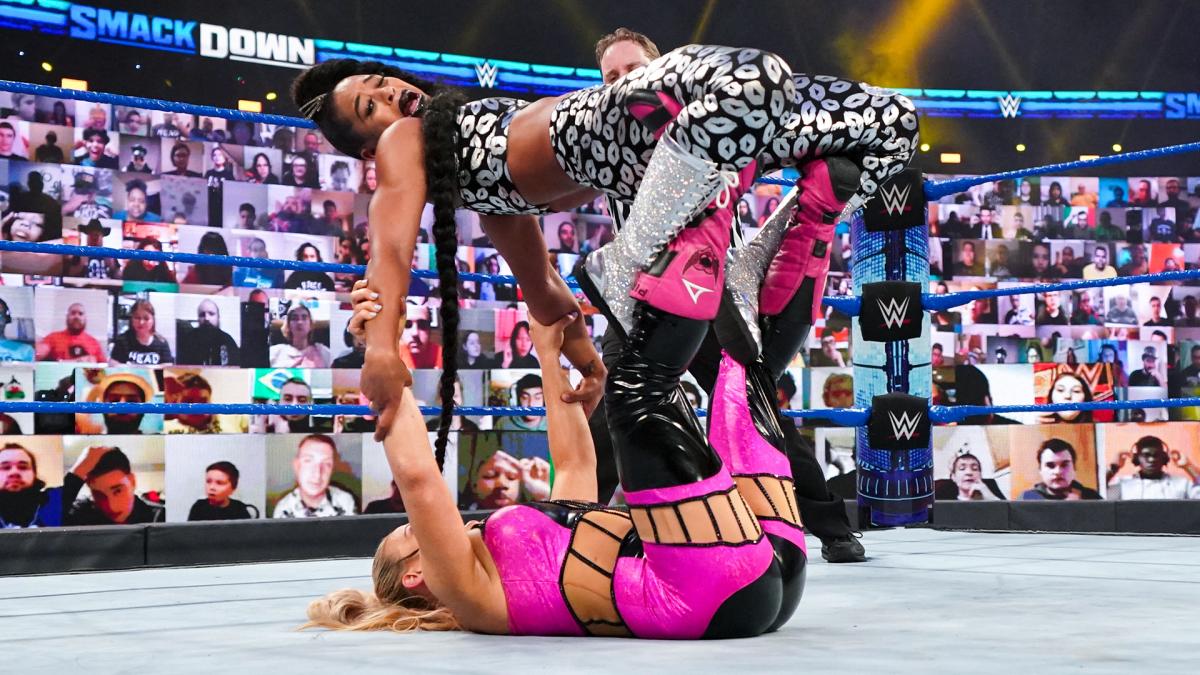 Belair goes for a Glam Slam, but Natalya reverses it into a pin, which Belair turns into her own pin for 2. The two competitors have a collision in the ring, and Belair rolls to the outside. Banks gets in her face, and Belair slaps her hard. She goes back into the ring and dodges a clothesline to then deliver the K.O.D. for the win.

After the match, Banks goes into the ring and delivers a backstabber to her WrestleMania opponent.

Edge meets Roman Reigns and Co. in their comfy room. He tells Reigns that he might not even have to beat him to become champ, he can beat Bryan, if he’s involved. He tells Roman to think about that possibility.

Ziggler starts off using his strength advantage, predictably. He beats Rey down in the corner and delivers a splash, but Rey fights back with a headscissors. He hits an enziguri and looks for the 619, but Ziggler hits him with an uppercut. The tag champ looks for a powerbomb, but Rey sends him outside with a hurricanrana. Rey tries for a headscissors off the apron, but Ziggler catches him and powerbombs him over the barricade, before hitting Dominik with a superkick as we go to commercial.

When we come back, Rey is fighting out of a submission, but Ziggler slams him to the floor for his effort. Ziggler continues his assault on Rey in the corner, but he makes the mistake of putting Rey on the top rope. Rey shoves Ziggler away and delivers a flying senton, before delivering a kick for a close 2. Ziggler dodges a bulldog attempt and hits a Famouser for a close 2 of his own. Rey looks for the 619, but Roode gets in his way.

Dominik comes in to try to take out Roode, but he gets tossed out instead. Rey shoves Roode to the outside, and Ziggler takes advantage of the distraction with a Zig Zag that Rey barely kicks out of. Ziggler looks for another powerbomb, which you think he’d learn not to do, as Rey turns it into a hurricanrana that sets Ziggler up for the 619. Rey hits it, and delivers a springboard splash for the victory. 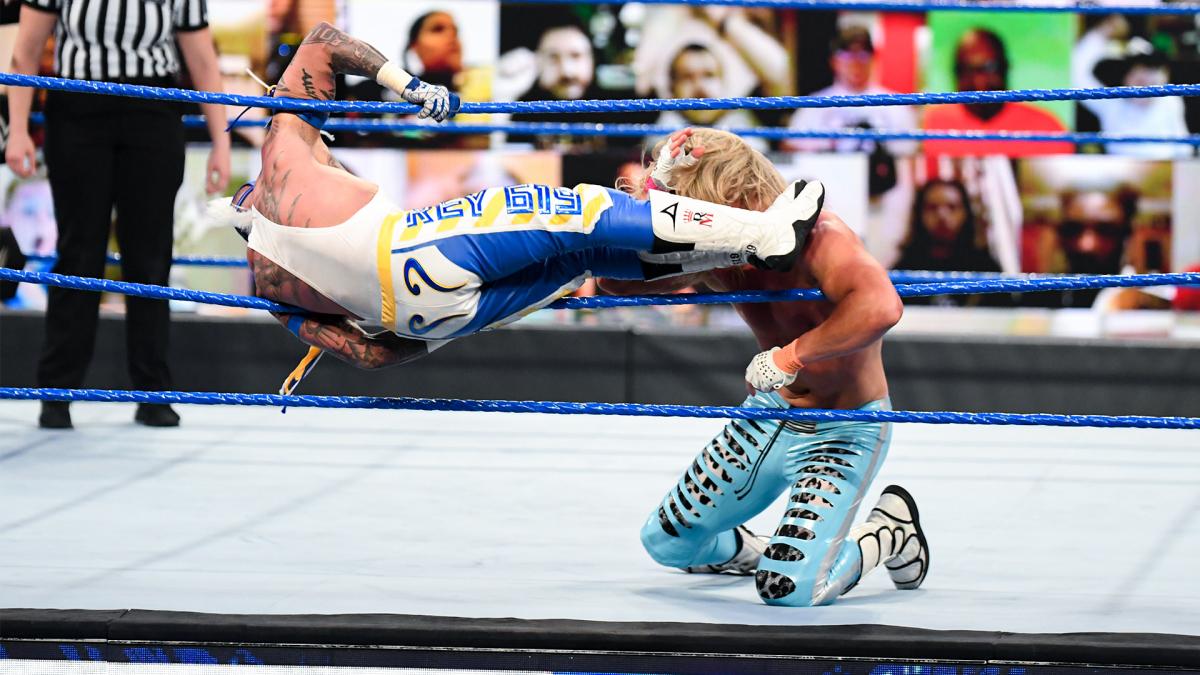 Adam Pearce makes his entrance, followed quickly by Roman Reigns and his best buds. The fake crowd chants “you tapped out” at Roman before Edge enters as well, followed by Daniel Bryan. Pearce makes his decision: there will be a Triple Threat Match for the Universal Championship at WrestleMania.

Bryan immediately attacks Edge as soon as Pearce finishes talking, but Roman downs Bryan with a Superman Punch. Roman looks to hit Bryan with a chair, but he gets hit with a Spear from Edge, and so does Jey Uso. The Rated R Superstar tries to deliver a Conchairto to the champ, but Roman escapes, so he instead turns his wrath to Bryan. WWE officials come in to stop Edge, but he hits them with the chair. Bryan escapes him as well, so Edge simply sits in the chair, staring into the camera.

Okay show, the matches were fun, but I gotta say, Edge semi-heel turning two weeks before WrestleMania was a silly move in my opinion. Plus, the Logan Paul announcement really brought down the show for me.