AEW Dynamite: Kenny Omega is OK but not OK with the Bucks, Johnny Hungiee gets his shot 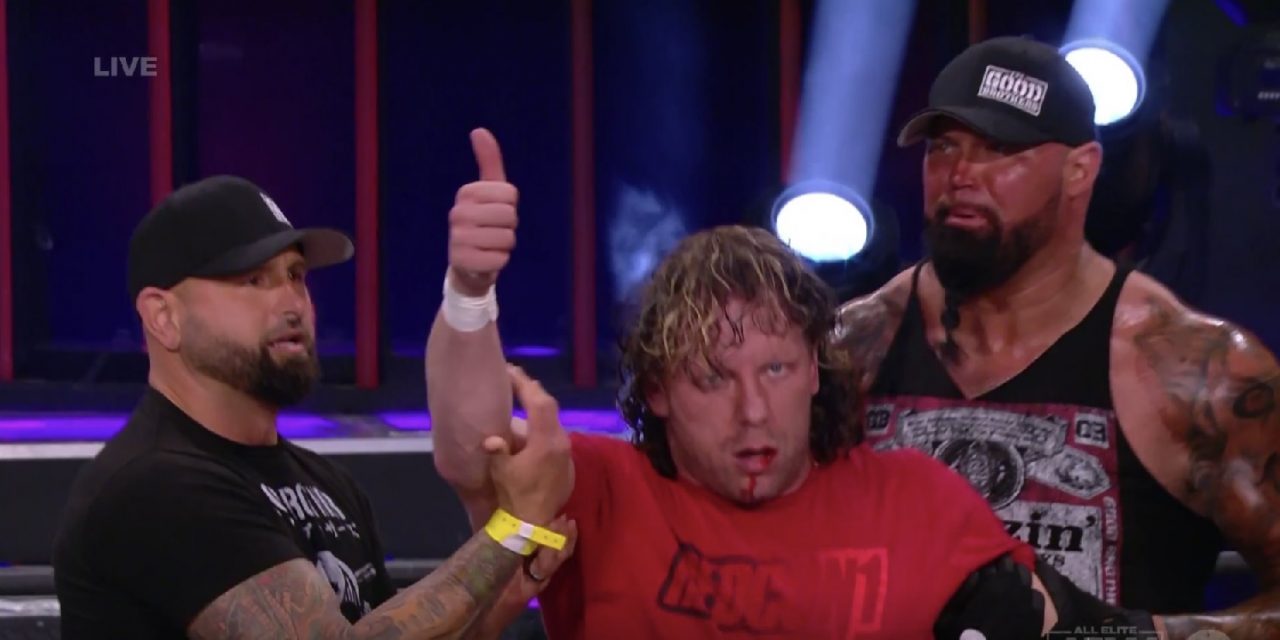 The problem with being all the way up is there’s nowhere to go but down. That glass half empty thought never crossed my mind for seven days after the sensational main event between Thunder Rosa and Britt Baker that closed last week’s AEW Dynamite. But here we are, and I can’t help but think there’s nothing that Dynamite can do this week to top or even equal that, especially since the pacing of the show usually means it doesn’t slam the gas down two straight Wednesdays. I’d love to be proven wrong, however, which is why I’m tuning in live on TNT right now.

“I don’t understand matches like this,” says my son. What he means is that Sydal gets a title shot if he wins. He’s not wrong, though: Proving you deserve a title shot by beating the person with the title is one of pro wrestling’s weird traditions, especially since the wrestler who proves it rarely is allowed to win the championship. There’s a faint glimmer of hope for Sydal, or maybe even two glimmers as he gets tantalizingly close on a pair of occasions. Alas, no one kicks out of the One-Winged Angel, and Sydal is part of “no one.”

It’s hard to imagine anyone could be more excited for a big opportunity than John Silver is to face Darby Allin tonight. As the members of the Dark Order wish him good luck, Hangman Adam Page does the same, noting that his teammates will love him win or lose.

Excalibur calls this a “tough test” for Page as he moves up in the singles rankings, but let’s be real. Page nearly takes Bononi’s head off with a Buckshot en route to a quick victory.

Lance Archer still has an issue with Sting, even though he’s more of a tweener instead of a straight heel now. He really wants to get his hands on Sting to … make more of a name for himself, it seems.

We flash back a week to see an emotional Thunder Rosa speak after her amazing match with Dr. Britt Baker on last week’s Dynamite. Back in the present, Baker stays firmly in character as she takes exception to the reaction she gets from the fans, and goes on to say Rosa should thank her for giving Thunder a chance to be part of history. She sarcastically thanks Mick Foley for the thumbs up but sneers that it took Mick 20 years to become a hardcore legend where she did it in one night.

Christian Cage is holding court with the Varsity Blonds and one of the Top Flight dudes, and he tells the backstage interviewer he is just passing along some wisdom. Old friend Frankie Kazarian stops by, one thing leads to another, and before long, he ends up as Christian’s first in-ring opponent. Next week, peeps, not tonight.

Again, this seems like a squash in the making. Martin and the Blonds at least get more time to work than Bononi, even if most of it is while the broadcast goes picture-in-picture.

A reluctant Tony Schiavone goes to interview The Pinnacle after their victory, including a very fired up FTR. MJF says he figured by now Chris Jericho would have come out and tried to break the walls down, but also says he knows the Inner Circle isn’t coming out because they’re terrified.

Taz wants to squash the idea that there are problems in Team Taz, but Brian Cage doesn’t seem like he’s 100 percent on board, and Ricky Starks’ smile seems a little too big.

But now the question we’ve all been waiting for: What’s going on with QT Marshall? Well, he admits that he got his spot because he is friends with Cody Rhodes, but also suggests that he’s been doing more real, actual work (h/t to Peter Gibbons from Office Space for that phrase) while laboring in Cody’s shadow. The only way to escape it, because this is pro wrestling, is to take on Cody in an exhibition match next week. Cody, left arm in a sling to really sell the damage he’s been taking, comes out and calls QT maybe his best friend in the business and grants his exhibition match while making it clear that he’s not going to hurt his friend. I admit this is somewhat intriguing, so good job AEW for making me care about Marshall. Don’t squander this chance.

You know the other five guys in this match can go, but it’s pretty cool to see Cutler take to the air with all the other high flyers. He plays D&D, you know, and there’s not a darn thing wrong with that. Rey and Penta have also been split up for bit, so having them back together again simply feels right. Unfortunately for Cutler, while the Bucks and Lucha Bros are engaged in their usual amazingness, Laredo Kid hustles to a corner and pins Brandon with a Spanish Fly. Welp, sorry Cutler.

After the bell, Omega returns to the ring to lay out Laredo Kid. He asks for the mic and says he is having a flashback to three years ago, when he had a choice to stay in New Japan, leave to go to “New York” or choose something else. He wasn’t talking about AEW, he means he chose the Bucks. Oh wait, this is a weird way of saying he was mad the Bucks didn’t pick him as their partner for this particular match? Omega wants the Bucks to throw up the too sweet sign now, calling it their last chance. They leave instead, leaving Omega to be laid out by twin superkicks by the Lucha Bros. as Don Callis heads for the back. The Good Brothers are a little late to the party and Omega is bleeding from the mouth. Hopefully someone turns the image of a woozy, bleeding Omega still flashing the camera a thumbs up into a meme.

Jade Cargill isn’t finished with Red Velvet, which seems like bad news for the cake lady. I just coined that this second.

How is Eddie Kingston’s leg? Broken, apparently. But he and Jon Moxley are already thinking revenge on the Good Brothers, and they doubt those guys are willing to go the same places they are. Mox also mentions that he doesn’t know or really like the Young Bucks, but he owes them one after last week. He does say, though, that if the Bucks are going to keep playing in this particular game, they better be prepared to get their hands dirty.

The Dark Order comes to the stage and give their show of support for Conti, but they don’t stick around. It’s too bad too, because AEW is definitely building Conti up, and beating Rose would be the biggest step in that plan to date … which she does, hitting the DDTay to get the three count.

Rose and Vickie Guerrero aren’t about to take this lying down, but Hikaru Shida makes the save with her kendo stick. Except Bunny gets involved as well, with Matt Hardy, Butcher and Blade watching from the stage. I smell a tag team match coming next week …

Miro is excited to see Kip Sabian destroy “Charles the Butler,” and what ensues is a bunch of trash talking between them and the de facto Best Friends ahead of their match next week. People, let’s please not wreck too many classic arcade cabinets. Please? Or at least Tony Khan should buy some more as he has the dough to do it.

Guess what folks? Scorpio Sky is still bitter, which is what happens sometimes when you turn heel. He’s got his eyes on Mike Sydal this Monday on AEW Dark: Evolution.

Every time Allin is announced at 170 pounds, I’m like, damn, it’s amazing he’s made it to this spot. But it’s equally astonishing that Silver has risen to be a main event guy, and to quote a musical I shouldn’t need to name, he is not throwing away his shot. His Dark Order mates are not heels now, of course, so aren’t going to break the rules to intervene, or at least not ambush Allin. Nevertheless, Sting and his baseball bat come out just to be sure. I don’t suppose we’d get a Sting heel turn here, as much fun as that would be. Props to the Gunn Club for leading cheers for both men. Johnny Hungiee has a couple chances to stun the world, but you knew how this was ending before it started. Allin retains.

The match is just the prelude to a brawl, as sometime happens. The Hardy Family is in there, Conti is running down, and then my recording cuts out. How does it all end? I can’t tell you, but I’m sure the Twitter-verse has you covered if you’re dying to know. See you in seven!

Alas, my fears proved true. This was a perfectly ordinary Dynamite almost from beginning to end, with the exception of the Lucha Bros. and Bucks and a decent enough main event. Not a waste of time to watch but let’s move on to the next one.