AEW Dynamite: Britt Baker, Thunder Rosa pull out all the stops in main event to remember 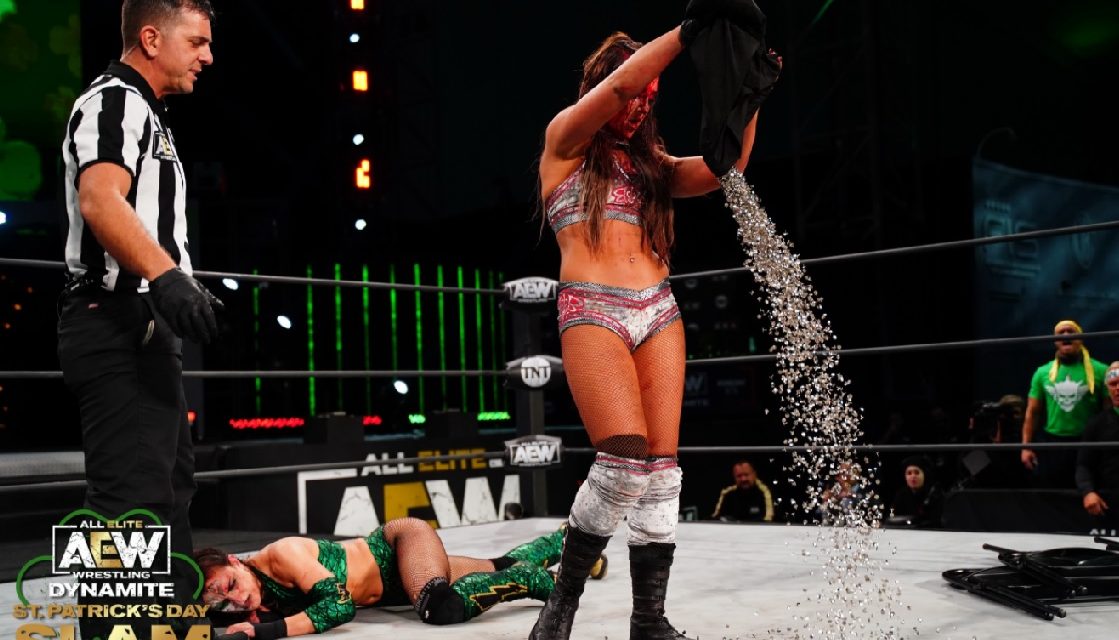 Sometimes you have to fight fire with fire. Unable, or perhaps unwilling, to supplant Chris Jericho as leader of the Inner Circle, MJF revealed he had a backup plan all along, secretly building a different and equally imposing group of his own. Not only do he, Wardlow, FTR and Shawn Spears seem formidable, they also have Tully Blanchard to mastermind some additional dirty tricks. Certainly this new force will be on display at some point tonight, so let’s boogie over to TNT to get AEW Dynamite started.

For someone who has rarely been allowed to talk since the beginning of AEW, Penta is proving to be pretty funny in his promos. He also has some fun on the outside, borrowing a St. Patrick’s Day hat from someone in the crowd, but there’s nothing amusing about what he has planned for Cody and his injured left shoulder. Rhodes shows zero fear, pun intended, going off the top rope and diving to the floor. Maybe lay off the topa suicidas with a bad wing, I don’t know. Finishers don’t seem able to put Penta away, but a roll-up does. That doesn’t sit well with the luchador, who rushes Rhodes after the bell. Dustin Rhodes and the Gunn Club come to the rescue, and Penta poses with the leprechaun hat again out in the crowd. QT Marshall shows up hella late, as he is now wont to do.

Alex Marvez asks the Young Bucks about their upcoming title defense against Rey Fenix and Pac, but their interview is quickly crashed by weekly interloper Don Callis. He masterfully attempts to plant some seeds of doubt in the minds of the Bucks, admitting that he has changed their friend Kenny Omega for the better while the Jacksons are just another tag team — and no longer Elite. Callis may be a jerk, but he’s our jerk.

As my son says about Jordyn, “she tried.” Red Velvet tries to take a swing at Cargill from the crowd after the final bell, but Bryce Remsburg is having none of it.

If you’re waiting on answers from MJF and his new group, you may get them now. Tully Blanchard gets the microphone first, calling his assemblage the greatest group in AEW since it dismantled the Inner Circle last week. “Well I guess I am Judas now,” MJF says as he gets his turn to talk. He says it wasn’t easy to pretend to like Chris Jericho, but he is extremely proud of what he did, killing the Inner Circle from the inside. It sounds like the official stable name is The Pinnacle, and in case you aren’t familiar with all of its members, MJF spends some time introducing each one of them. They plan on taking the Inner Circle’s locker room, and then everything else that belongs to them.

Matt Hardy, Private Party, The Butcher and The Blade (w/ The Bunny) vs. Jurassic Express and Bear Country

I totally forgot about Marko Stunt and thought this was going to be a 5-on-4 handicap match. Sorry Marko. There’s also a question about how well the face group will work together thanks to their rivalry during the last few weeks, and sure enough, they end up at odds and pointing fingers before it’s all over. And when it is, it isn’t their team standing triumphant.

Winners: Matt Hardy, Private Party, The Butcher and The Blade by pinfall

Jon Moxley says he doesn’t feel too good, but instead of relaxing on a beach, he wants to fix his real problem: the Good Brothers. Eddie Kingston says Doc Gallows looks like Forky from Toy Story 4, and there are many references to other promotions from Stamford to Tokyo, both veiled and obvious. Kingston also knows his 90s rap references, clearly.

Christian Cage promises he’ll answer a question about why he came to AEW, but he wants to rant first. “I make wrestlers level up,” he says, claiming he is “the workhorse” in professional wrestling. Cage says he isn’t there to take anyone’s spot, because the only one he is interested in is occupied by Omega, who he vows to see down the road. Getting back to the original question, Christian says he came to cement his legacy and outwork everyone.

No ring intros here folks, as the Good Brothers jump our heroes before the bell and set off a brawl that gives them the upper hand when the match officially begins. Picture in picture appears to be just what Mox and the Mad King needed to refill their energy gauges and … what? This isn’t a video game? OK. The newly reinvigorated BFFs Moxley and Kingston win the day, but considering they just get beaten up again after the bell, one wonders if that even matters.

Omega comes to the ring to get in cheap shots while he can, taunting Moxley and putting the boots to him. Kingston’s leg is in danger as someone leaps onto a chair wrapped over it. The chair is placed over Moxley’s neck, but the Young Bucks arrive to talk them out of it. A heated discussion ensues, with Kenny offering a test of loyalty with the Bullet Club hand gesture. Will the Bucks join him? We may never know, as Moxley chases everyone away with the chair.

Because it seems like an obligatory part of every episode, Tony Schiavone summons Sting and Darby Allin for a talk. The latter wants to defend his TNT title weekly, and he wants to start by issuing an open challenge to anyone from the Dark Order. Lance Archer, last I checked, is not a member of the Dark Order, but he comes out to try to talk his way into a title shot. Jake Roberts has some words for Sting as well, and as soon as they leave, Team Taz comes out to take their place. Brian Cage is so mad at Sting he wants to speak for himself. But he flips the script by telling Sting he is still the Icon, ticking off the rest of Team Taz in the process. The facepaint friends just … leave after Team Taz departs, presumably because no one is left to yell at them.

A video package has Scorpio Sky explain his heel turn in terms that are surprisingly logical for professional wrestling.

Fenix is on quite the roll as a singles competitor on top of his number one contender status in the tag team division. So of course he’s going over here, which he does.

Miro needs to switch to decaf or something. He really doesn’t want to take on Chuck Taylor and Orange Cassidy again, though Kip Sabian definitely does. “The worst thing for your career is having your wife at ringside,” Miro says knowingly, before assuring Kip that while nothing can stop his destiny of becoming AEW champion, they are still buds outside the ring. After Miro leaves, Kip tells Alex Marvez they definitely accept the match against Best Friends.

So which member of the Dark Order will accept Allin’s open challenge? How about John? The Meat Man it is.

In case there was any doubt that MJF’s stable is called Pinnacle, he erases them by hanging a nameplate on what used to be the Inner Circle locker room. Hey, he meant what he said about taking their room literally.

The question that needs to be answered once and for all: If a match is unsanctioned, why do they announce the participants and why is there a referee? Also the lights should actually be out. That is all.

Since it’s anything goes, it’s fine for Rebel to get in a crutch shot right off the bat. Baker wastes no time taking advantage, wielding a chair as champion Hikaru Shida watches on an unsanctioned flatscreen backstage. Just kidding about part of that. Rosa is bloodied, something you don’t see too often in a women’s match on free TV, right before we go picture in picture again. As ladders come into play, Baker ends up extremely bloody in her own right, her face turning super bright red. With both women unable to put each other away, Rebel slips her boss a black bag, which turns out to be holding a ton of thumbtacks. Rebel makes another run-in with the crutch only to get knocked off the apron through a table. Baker takes a Death Valley Driver into the thumbtacks but kicks out anyway. “I’m gonna rethink my friendship, I’m never going to piss her off again,” quips Schiavone. Baker applies the Lockjaw only to be rolled back into the tacks. What’s it going to take to end this? Well, Rosa’s piledriver from the apron through a table does the trick. In one word, wild.

That was quite an ending to what was otherwise a good but not amazing show. Just goes to show you the importance of a hot main event. See you in seven!

I was all set to give this episode 3 or 3.5 stars but darn if Baker and Rosa didn’t convince me to go higher after the main event. Saying it was the craziest women’s match I’ve ever seen on free TV would be true, but also selling it short as it’s hard to recall many AEW wrestlers throwing caution to the wind on Dynamite to date, full stop. Respect.