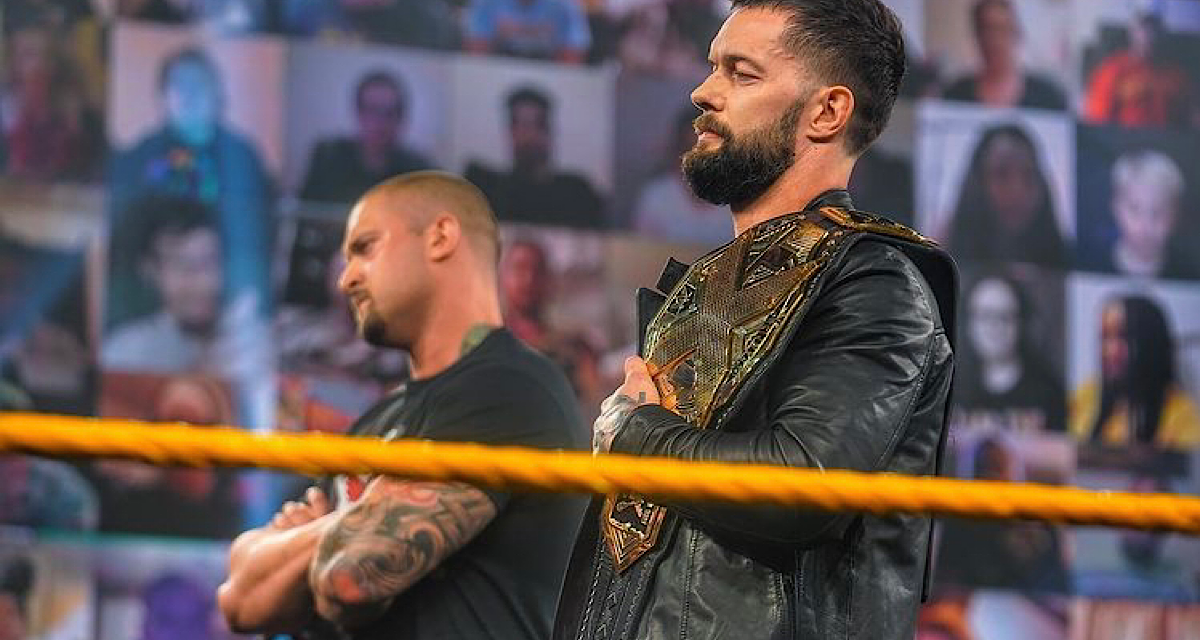 The highspeed road to WrestleMania this year includes the first two-night NXT TakeOver event on April 7th and April 8th with NXT TakeOver: Stand & Deliver. The match cards are already promising with the culmination of Adam Cole and Kyle O’Reilly’s rivalry and the return of some NXTUK Champions as well. Plus, a stellar main event in Karrion Kross versus Finn Balor for the NXT Championship will headline.

The Irishman Balor opened up tonight’s Saint Patrick’s Day episode. It wasn’t long before Kross and Scarlett interrupted preceding their championship matchup in April, subsequently followed by the NXT Tag Team Champions Oney Lorcan and Danny Burch. After some bickering from the two, Scarlett with ease (look at that outfit!) seduced the champions into defending their titles against Kross and Balor tonight!

The Way’s Johnny Gargano and Candice LeRae give Theory a pep talk via tablet. Remember, this matchup is about facing his fears and retaliating against Lumis’ unfair assessment of Theory’s abdominal region. The latter takes control throughout picture-in-picture before Lumis makes the comeback. Later, he surprisingly extends a hand as Theory embraces him with a hug, only to be lured into a submission. Theory inevitably fades away, and Lumis gains the victory.

After brawling with a returning Kyle O’Reilly last week, Adam Cole sends a message in-ring. Out comes General Manager William Regal though, declaring that O’Reilly has been injured again. O’Reilly appears on the big screen with a rebuttal to Cole, and the latter insists on finding him.

The real, real NXT Cruiserweight Champion Jordan Devlin touches ground on U.S soil after a prolonged hiatus — thanks to Coronavirus restrictions of course. The interim champion Santos Escobar accompanies his boys into the following matchup.

It’s good seeing Fandango and Tyler Breeze back in action — two guys seemingly burdened with injuries and delays. The opening minutes depict even showings, but Raul Mendoza kicks Fandango to the floor before commercial. Breeze then makes the hot comeback but eventually falls to Legado del Fantasma’s double-team finisher. Escobar takes to commentary asking for where Jordan Devlin is… ask and you shall receive.

Both Cruiserweight champions meet in-ring, stating their claims at rightfulness. Devlin rocks Escobar with a headbutt — a major weapon considering that cranium — and escapes the lackeys. It’ll be Devilin versus Escobar at NXT TakeOver: Stand & Deliver.

Adam Cole tells McKenzie Mitchell that he’s gonna find Kyle O’Reilly and “end him.” He continues, “That is not undisputed. That is a promise.”

Saray is coming to NXT, and a video package highlights her time in Japan. Commentator Beth Phoenix is “so excited to welcome Saray, “The Warrior of the Sun”, to the greatest women’s division on Earth.”

A tweet from Cameron Grimes insists that he’s vacationing right now. The images are edited, but commentary plays along.

The music, the build, the composure… Stark should absolutely be a heel. There’s a nice sequence of chain-wrestling, which is unfortunately rare in this division, with Kai gaining control. Stark performs a cross-body onto Kai before commercial to turn the tides. She delivers a German and attempts a springboard but gets caught by a catching superkick for two. They trade reversals before Kai hits the GTK. Although she lost, Stark put on another impressive showing; with that crispness and intensity, she stands out from the crowd.

It appears the Grizzled Young Veterans submitted a homemade promo. Zack Gibson injured his hand, and together they’re gunning after MSK.

No bluffing from Ciampa tonight; he’s going it alone. He sneak attacks Imperium before the matchup, but numbers take control with Aichner interfering ringside. Ciampa however recuperates with a comeback and hits Willow’s Bell for the quick victory.

The symphony music plays, and the lights go dim. The imposing silhouette appears like it’s God himself — Walter is here, and his presence is practically palpable! He gives Ciampa a signature chop, which sounds like a gunshot, and powerbombs him into the canvas. There aren’t many left in wrestling with an aura like Walter’s.

Earlier, General Manager William Regal was urgently needed as “something happened to Adam Cole,” according to a crew member. An entire matchup and segment later, cameras show both Cole and Kyle O’Reilly handcuffed by police outside. Apparently, O’Reilly tried running him down?

“Lemme talk to ya,” says LA Knight before his official NXT debut. While the wordsmith does his words, Bronson Reed looms behind him.

Knight powers through his opponent before Bronson Reed appears onstage. He has Knight’s custom-made Gucci blue jacket and rips it in half while forcing it on. This gives Grey an opportunity to capitalize, but he succumbs to Knight’s facebuster finisher. Not exactly a must-watch debut here for Knight. Bigger things are hopefully on the way, but not until this Reed rivalry is finished with.

Raquel Gonzalez is about to sign the contract to face NXT Women’s Champion Io Shirai, but instead, Dakota Kai wants a tag team match against Shirai and Zoey Stark. Here’s a bad case of stealing one’s spotlight, Kai.

Xia Li cuts a vignette promo, but it isn’t subtitled. Let’s assume that it was great.

The state of NXT’s tag team division isn’t pretty; champions Lorcan and Burch get the enhancement talent entrance. Kross looks like a monster opposed to the champs and applies a long-lasting bearhug to Burch. It takes a blatant interference from Lorcan to stop the onslaught, and Kross overcomes that as well. Throughout picture-in-picture, Balor keeps the pressure on Lorcan but momentum switches eventually. Meanwhile, medical personnel attends to an injured Burch following Kross’ double-suplex from earlier. Balor makes the comeback and connects with a ringside Slingblade. He then dropkicks Lorcan but inadvertently takes out Scarlett! Scarlett is actually amused by the event though, because Kross inevitably demolishes his partner. After some barricade shots, Balor is thrown back in and pinned by Lorcan with… a running uppercut. The NXT Champion has been pinned, and the tag champs retain.

Kross delivers a Doomsday Saito to Lorcan after the fact and attempts to choke out Balor. But Scarlett instead lifts Balor up in position for Kross’ running elbow. “Everything happens for a reason,” says Scarlett over the champion’s body.

Although the matches here weren’t anything special, the story progression was really intriguing. Kross and Balor, O’Reilly and Cole will undoubtedly bring the house down at TakeOver anyhow. Plus, two big returns from NXTUK champions in Jordan Devlin and Walter — him especially – made tonight’s episode an exciting build to April’s two-night event.