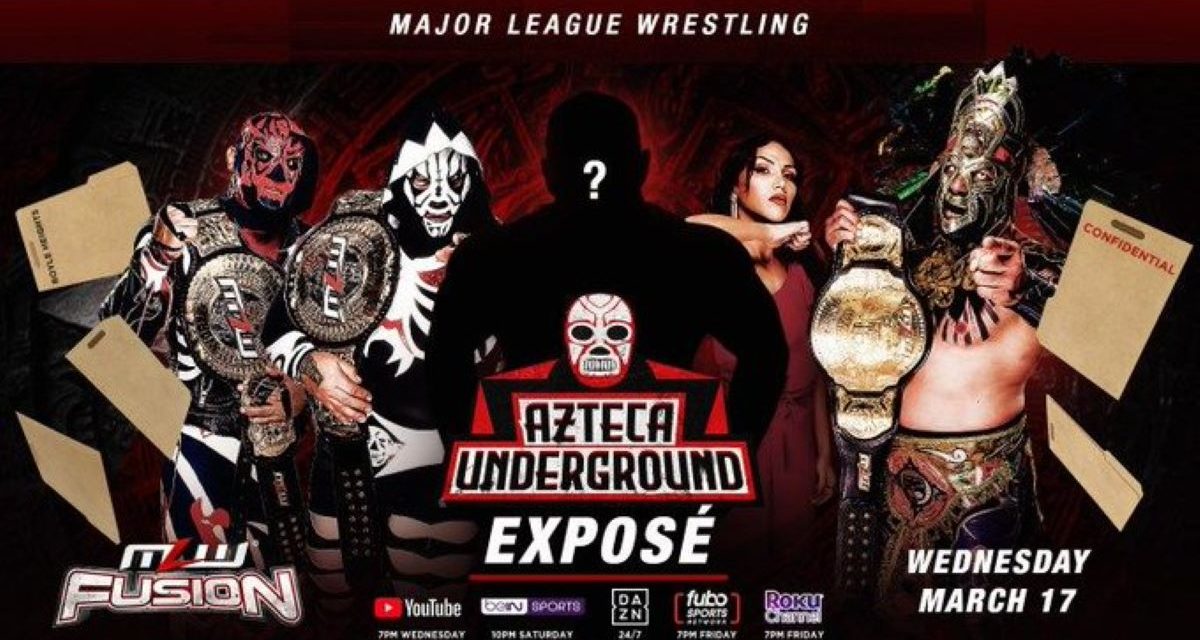 The main event is going be full of chaos already with Injustice members Jordan Oliver and Myron Reed go up against Los Parks for the MLW Tag Team Straps.  But as the show starts, we see a brawl in the outside of the club as Los Parks, Injustice and now Contra Unit are getting into the fray.  Now we get word that cops are coming to the nightclub…And it’s not even a Friday?

Either way, we are live from the GILT Nightclub in Orlando, FL. As always, your Commentators Rich Bocchini and Jared St. Laurent have the call, and the Interview Queen, Alicia Atout will keep us up to date with tonight’s doings that have a-transpired.  But lets get started with tonight’s First Match… 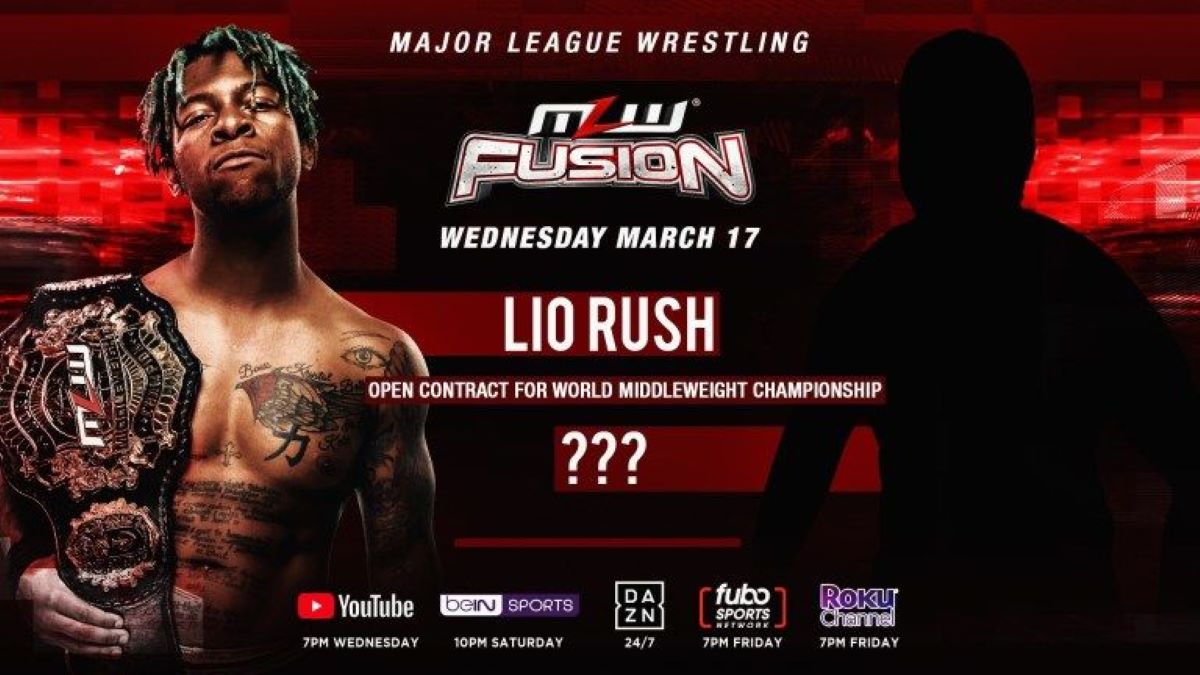 Last week, the contract was taped up to a wall, and someone took advantage.  So, who is the mystery opponent?  For of us that are familiar with the musical strains of Janet’s Jackson’ s “Black Cat” means…It’s Brian Pillman, Jr.  Therefore, it’ll be…

Bocchini alludes to the fact that Pillman is having a dry spell of late, but wants to reverse the curse with a win for the middleweight strap tonight.  The bout really does emphasize the speed (Lio Rush) versus size (Pillman), but Rush is able to take an early advantage.  Clearly frustrated, Pillman goes outside the ring to collect himself, but Rush goes outside and takes the fight to Pillman.  Rush is now in charge and gets Pillman back in the ring where he systematically dismantles him in the squared circle.  Pillman gets his second wind, and Rush tries to stop the momentum, but Pillman gets a powerslam to Rush.  A quick cover gets  Pillman a two count.  Now Pillman is finally in control, and goes to the corner and attacks Rush with a unique palm strike to a fancy cover, but gets only two from the ref.  Pillman in disbelief, he goes outside the ring and attempts to use the ropes for a springboard, but Rush cuts him off by a handstand kick that stuns Pillman.  From there, Rush nails a beautiful spinning lower heel kick.  He goes up for Final Hour, but Pillman cuts him off and nails the superplex from the top rope.  Both men dazed, Pillman tries to take advantage but from there, Rush gets his rope-assisted stunner, up top for the Final Hour frog splash.  Rush covers, and…well, you know what time it is, even with Daylight Saving Time moving an hour forward.

Your Winner via Pinfall:  Lio Rush

We now go to MLW Breaking News, where Alicia Atout states MLW, after seeing the pandemonium before the show decided to add Contra Unit in a Triple Threat, No-Disqualification Match for the tag belts.  As the great philosopher Jim Ross would say:  Business has picked up tonight.

We go to a recap of last week, after Hammerstone won against L.A. Park, while Mil Muertes Pearl Harbored Hammerstone after the match and took the MLW Openweight Championship. Hammerstone ain’t up for games with Azteca Underground, and sys it’s fine if Muertes wants to pretend to be the champion. But he wants Muertes to step up and be a champion and challenge challenges him officially for the belt. Yeah, I would Love to see that bout

Plugs for Dark Side Confidential, and more behind the scenes footage from the Von Erich segment, which will be showing on VICE on March 23rd.  It’s one of my favorite episodes, and I’ll be DVR’ing that episode myself.  As for Ross and Marshall Von Erich, they cut a promo on “Filthy” Tom Lawlor and issue a challenge to Team Filthy to fight them next week.  They’ll even let them pick the stipulation. Curious how Lawlor will respond.

Still no idea who El jefe is from Azteca Underground(other than the opportunities link on their website), and we then go to Salina De La Renta who says Azteca Underground will run rampant tonight against Parrow and the tag teams in tonight’s’ main event.  La Bruja; thy name is Salina de la Renta.

But let’s jump the MLW Top Ten Heavyweight Countdown, sponsored by Pro Wrestling Illustrated.  And they are

9. Gino Medina (“El Intocable” makes his debut after a string of impressive victories)

7. Richard Holliday (moving down a spot, as is…)

4. Mil Muertes (also making his presence known on the list)

And your MLW World Heavyweight Champion is still….Jacob Fatu

But it’s time for your classic “unstoppable force versus immovable object” match. 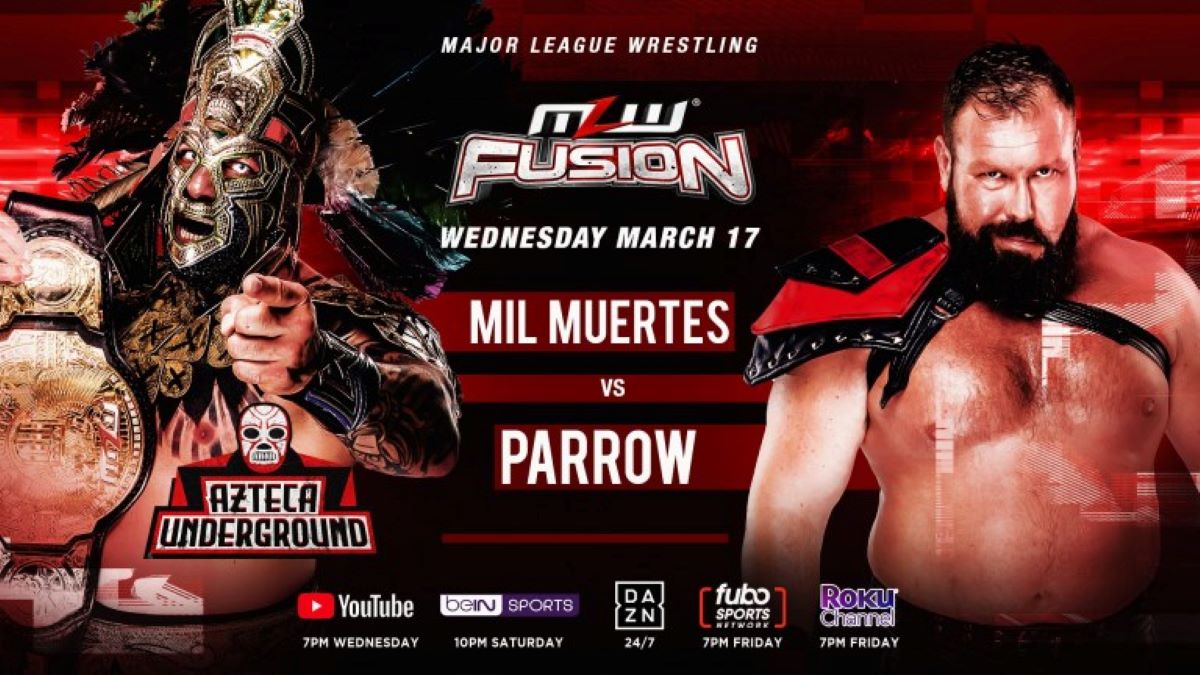 Muertes comes wearing the MLW Openweight title, and the Man of 1000 Deaths is looking very imposing, but Parrow is no slouch, either.  This is just a straight up big man matchup, and neither one seems to be giving an inch.    Even though Parrow looks like the second coming of The Mountain (for all you Game of Thrones fans out there) Muertes shows he has a few tricks up his sleeve as hegoes for a low kick and DDT to Parrow, but only gets a two count.

As Muertes wears down Parrow, we get a picture in picture with “Breaking News” that : Bu Ku Dao is laid out in the dressing room.  Bocchini says they’ll be following more on this story throughout the night

Back to the match, Parrow is in control with a senton to Muertes’ back and goes to a cover, but it’s a two count.  Parrow rushes at Muertes, but gets countered with a powerslam by mil Muertes, but it’s another two count.  Parrow tries to mount up an offense and rushes at Muertes in to the corner, but Mil Muertes counters to a Straight to Hell (flatliner) and gets the win.

Your Winner via Pinfall:  Mil Muertes

It’s a chaotic night, to say the least, and now Dao’s condition is considered serious, which puts the TJP match in doubt.

We then head to the Never Say Never Control Center. Alicia has an update for new matches matches signed and confirmed for March 31st.  They are:

And Jacob Fatu versus Calvin Tankman for the MLW Heavyweight title

We now get a Contra Unit “feed interruption”, and Mads Krügger voice is so muffled, it sounds like he’s taking orders from a McDonald’s drive thru window.  The is the gist of what he said, which I’ll transcribe:

(Note to Self:  Turn on close captioning if Krügger cuts a promo again)

Now, onto an intelligible “Filthy” Tom Lawlor , who cannot believe just how dumb the Von Erichs’ were to let him pick the stipulation for next week. He let’s us know that next week, it’ll be Team Filthy vs ACH and the Von Erichs ….in a Chain Ropes Match. This I’ll have to see

Looks like the match between Bu Ku Dao and TJP won’t be happening so let’s get too the Main Event….

As the intros for the teams start, Contra Unit and Injustice start swinging away, and then  Los Parks enter with L.A. Park wielding a steel chair and swinging away.  Truly he is the Chairman of Lucha Libre.  Yeah, folks…forget finesse, technical prowess and strategy. This is a brawl-a-rific match that somewhere in Philadelphia, PA, someone at home is chanting “E-C-Dub.” This is the basics, because covering a match like this inbthe normal sense is absolutely ridiculous.  It’s like recapping how you wrangled cats, or herded children to see a Fellini film.  It can’t be done.  But these are the points I was able to cover:

Daivari smacks Reed over the head and body with a pizza sheet tin, but Reed kicks at Daivari. Reed covers but it’s broken up by Hijo Del L.A. Park.  At one point Hijo nails a shot over Reed’s head that dents the steel chair.  Someone is learning from Papa Park.  Reed and Hijo bow out of the ring and now Oliver is in the ring fending off Los Parks, but it’s too much Calavera chaos.  But just as Los Parks are going to dominate Oliver, Contra Unit takes it to Los Parks.  Gotch goes toe to toe with Papa Park and El hijo, but nope.  That ain’t happening Senor.

During the match, he get a final update that Bu Ku Dao is being transferred to Orlando Regional for observation, and TJP is suspended effective immediately.  Such drama unfolding, while the action goes on in the ring.

Gotch still in the ring with Papa Park and able keep up with the Chairman’s assault.  Injustice had been remarkably absent during the majority of the match, but then start to ramp up  the violence on the outside of the ring to the remaining members of Contra and Los Parks before sliding into the ring and sends Gotch and Papa Park outside.  All of Los Parks and Contra collect on the outside of the ring like bowling pins.  Reed leaps outside but gets caught; now Oliver comes up with the spare to knock down all members.  Oliver back in the ring but Contra Unit get in and catch Oliver into a Spike piledriver to attempt to pin.  El Hijo quickly gets in and hits both Contra Unit with the Pizza Tim to put and end to that.  Gotch still dazed gets a huracarrana by El Hijo to be dumped outside.  Oliver is still in thr ring and completely looped to what is happening, and that’s all L.A. Park needs to hit a spear to Oliver and get the \one, two, three count for the win.

Your Winners via Pinfall:  Los Parks

Show has all members of Los Parks and Salina de la Renta celebrate in the ring with all the gold, and the logo for Azteca Underground plays out the show.

Lio Rush is proving every time he’s on the screen he earns the “moneyweight” moniker, and seeing Mil Muertes back on TV is a real treat for anyone needing their Lucha Underground fix.

As for the main event, it was just absolute chaos, but it was cool to watch and sets up the pieces nicely once the Never Say Never event on March 31st takes place.  I just want to know what Azteca Underground has in store, but I know we’ll have that “opportunity” soon enough.

Until then, see ya in Seven.