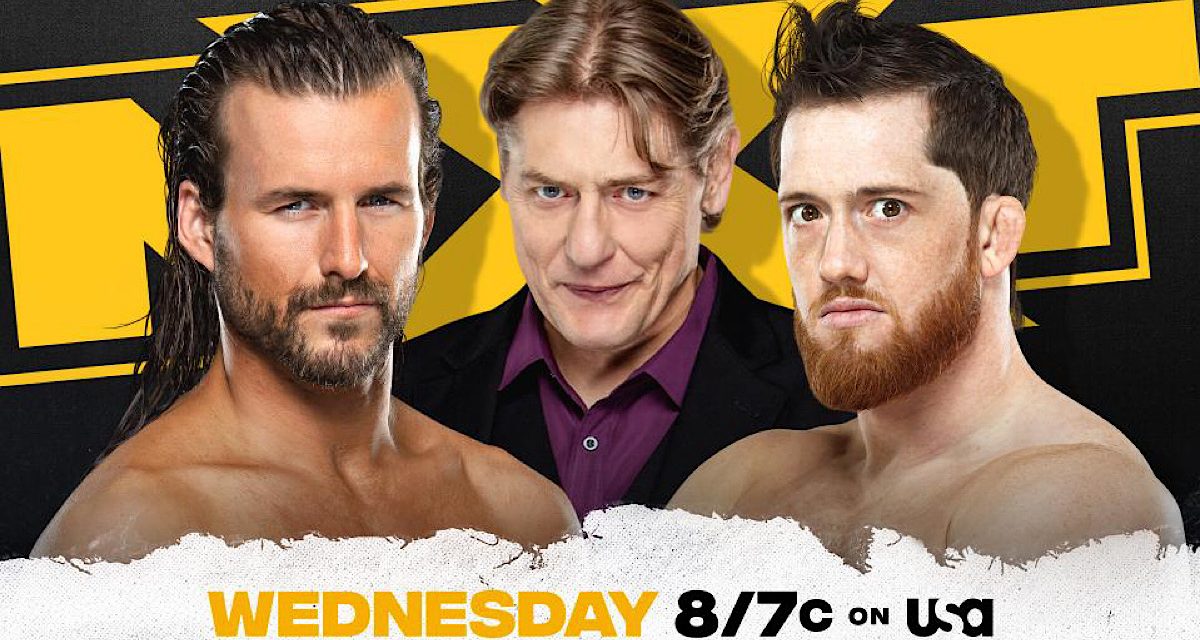 Gonzalez and Stark begin first, and down the line, a singles championship rivalry between them would rule. Shortly after though, Kai and Shirai tag in with the latter taking control. The opposing team beats down on Stark throughout picture-in-picture, but of course, Shirai conveniently makes the comeback when the broadcast returns. Stark and Shirai take out Gonzalez with ringside dives, but the former gets caught with a slam. Gonzalez lifts Stark up and simultaneously boots Shirai off the apron, thereafter bringing her opponent down for three.

Shirai succumbs to the numbers advantage in a post-match beatdown. Gonzalez then slams her onto the announce desk, sending a statement preceding the main event of NXT TakeOver Night 1 in April.

Security camera footage from yesterday watches over Kyle O’Reilly amidst his Brazilian jiu-jitsu training. Through the door comes a hostile Adam Cole, who clearly should be charged with something after attacking O’Reilly mid-roll. Cole’s biggest offense though was stepping onto that mat with shoes on!

O’Reilly is now guarded by security walking into the Capitol Wrestling Center as he’s halted by former stablemate Roderick Strong. The latter is wanting to kick Cole’s ass together, but O’Reilly politely rejects. Strong’s response?: “Both of you — you and Adam — can go to hell.”

The real NXT Cruiserweight Champion Jordan Devlin hypes up his match tonight against Kushida. It’s really hard not to compare Devlin to his famed mentor Finn Balor — for obvious reasons, but he’s clearly holding his own.

Knight doesn’t falter in confidence but falls to the power advantage of Reed who delivers an eye-catching back body drop. Reed clubs and chops Knight around until the latter turns the tides before commercial. Reed eventually makes the comeback and plants his opponent with a chokeslam, scales the ropes, and successfully hits the Tsunami Splash for three… what in the world?! There isn’t a post-match, and Knight simply tucks his tail and grimaces off.

The NXT Tag Team Championship vacancy will be filled at TakeOver Night 1. MSK, Grizzled Young Veterans and Legado del Fantasma will battle under triple-threat rules to determine the new champs.

A video package depicts the essence and aura of NXTUK Champion WALTER, who faces Drake Maverick later tonight. Social media has already sent their condolences and well-wishes to poor Maverick.

Although Lorcan has vengeance on his mind, this one should be quick. The competitors brawl around ringside, and Lorcan fights back with chops and a dropkick before commercial. Assuming this match lasts another segment, Lorcan will admittedly survive much longer than expected. Kross delivers a Doomsday Saito and talks trash about Danny Burch which fires up his opponent. Lorcan targets the bigger man’s shoulder and hits some stiff slaps. But Kross hits another Doomsday Saito and the finishing running elbow for three. Some lessons were learned here; Lorcan is a fantastic babyface and turning him heel was a misstep.

With a streak of blood dripping from his chop-mangled chest, Kross has a message for NXT Champion Finn Balor. Speak of the devil, because out he comes. Balor throws some calculated verbal shots at Kross preceding their big championship matchup at TakeOver. This, ladies and gentlemen, is a main event!

General Manager William Regal announces a 12-man battle royale for next week. The final six participants will qualify for a gauntlet eliminator match, with the winner receiving a North American Championship match against Johnny Gargano at TakeOver Night 2.

Kushida has words for opponent Jordan Devlin. He says, “Tonight, you are going to find out what happens when you face the best technical wrestler in NXT.”

Especially concerning non-NXTUK viewers, a matchup with WALTER is a special attraction. The Austrian towers over Maverick, powerbombs him, and quickly gains the submission victory with a single-leg crab. There’s really nothing to complain about here. Interrupting Imperium’s celebration is Tommaso Ciampa, the partner of Timothy Thatcher and victim of a WALTER chop last week. He wastes no time; Ciampa versus WALTER for the NXTUK Championship at TakeOver! Numbers overcome Ciampa as WALTER delivers another signature chop to the challenger.

Pete Dunne cuts a cellphone promo and vows to become North American Champion at TakeOver. Sorry, but Dunne has really lost his steam.

North American Champion Johnny Gargano barges into William Regal’s office to voice his issues with the aforementioned battle royale and eliminator since he can’t study his opponent. Get to cramming, Johnny!

With outside distraction from Stone, Martinez and Aliyah take control over the champions. Moon quickly makes the comeback and Blackheart DDTs Martinez out the ring. Moon hits the Eclipse for three in a surprisingly but welcomely short bout. The NXT Women’s Tag Team Championships are already less-than-five minute filler matches. Who thought that these were good ideas again?

Thank goodness, Cameron Grimes makes an appearance. He pep talks Roderick Strong about saving the Undisputed ERA — with Grimes having intellectual property of course, but Roddy objects with a punch. More Cameron Grimes on TV, please!

Blackheart and Moon’s backstage interview is interrupted by The Way, Candice LeRae and Indi Hartwell. They’ll meet again on the latter duo’s time and stage.

The competitors trade offense maneuvers in the opening minutes until Devlin catches his opponent with a nice springboard moonsault outside. After picture-in-picture, Kushida fights back with strikes and continues targeting the left arm. Devlin hits a cutter and positions Kushida up top, but Santos Escobar appears onstage for a distraction. His crew, Legado del Fantasma, pulls him out but inadvertently gets knocked off the apron by Kushida which allows Devlin to hit the bridging roll-up for three. An enraged Kushida dives onto Raul Mendoza and Joaquin Wilde as Escobar steps into the ring…

Escobar and Devlin are face-to-face when “HBK” Shawn Michaels’ music hits! Knowing a little something about unification title matches, Michaels grabs a ladder from underneath and pushes it in-ring. He heads backstage and exchanges a glance with protege Adam Cole.

Security surrounds a platformed table where rivals Kyle O’Reilly and Adam Cole sit across from one another. General Manager William Regal screams out, “It’s obvious that the situation between the two of you… has reached boiling points — in fact, you got the bloody police involved!” His solution lies in the contract. Before any signings occur, Cole finally reveals his reasonings for betraying the Undisputed ERA, which is O’Reilly playing second-fiddle to Finn Balor and losing his sight. “It was never about a brotherhood. It was about being the best, and dammit, you are looking at the best!” says Cole. Here was an outstanding promo by Cole that is worth checking out.

O’Reilly fires back with an even better rebuttal and promo. Although the Undisputed ERA experienced career-changing growth and success, O’Reilly cherishes growing as a person. “I sold my soul for the Undisputed ERA, and I want it back,” says O’Reilly. The table is inevitably tossed, and security holds the competitors back. It’s Cole versus O’Reilly in an Unsanctioned Match at NXT TakeOver: Stand & Deliver!

Wow, that O’Reilly-Cole segment was good! Spanning numerous promotions and multiple years, this rivalry is creating its own lore of standout moments and matches. Plus, it carried some weight with this episode as every match tonight was either filler or plain average. Regardless, TakeOver is looking sweet.