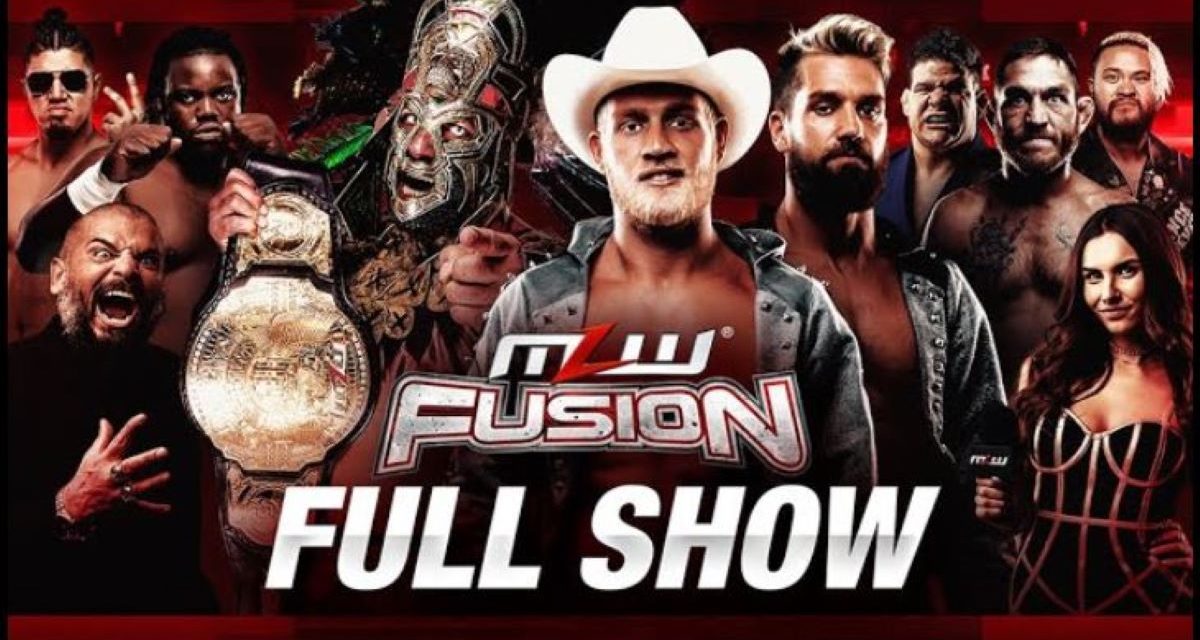 Much like Fleetwood Mac, the hatred between Team Filthy and The Von Erich’s will never end, and they’ll never break the chain of violence (seriously, watch the VH1 Behind the Music on the bandmembers and tell me I’m wrong).  Tonight’s Chain Ropes Match will test not only the depths both teams will sink to hurt each other, but how strong their links are to violence.

Cold open by Josef Samael, who says he smells fear from Injustice and thinks it’s pathetic. Next week, Contra will unleash a campaign of horror at Never Say Never. Samael also tells Calvin Tankman there is no escaping the public execution that awaits him at the hands of Jacob Fatu.

With that, we are live from the GILT Nightclub in Orlando, FL.  Your commentators Rich Bocchini and fight analyst St. Laurent have the call.  So much to focus on in preparation for next week’s Never Say Never show, and Interview Queen Alicia Atout will keep us up to date, but we can’t focus on that because it’s time for your First Match…

Match has nice chain wrestling from both competitors to start, with Zenshi is in full control, but Medina is very tranquillo (apologies to Los Ingobernables).  Zenshi is able to keep up a fast pace, and at times out moves El Intocable, but a springboard move from the top rope is Zenshi’s mistake, and Medina does a dropkick with both feet to the mid-section of Zenshi.  Medina slows the pace, but Zenshi still in control.  Medina then sends Zenshi to the corner and gets him up top, where he tries to take off Zenshi’s mask.  Zenshi forces off Medina, and hits a somersault flip to knock down Medina, and then he hits the ropes for a Spanish fly to cover, but only gets a two count.  Medina goes for the mask again, and Zenshi deliver a Pelé kick that knocks down Medina for another cover and roll up, but it’s another two count.  Zenshi keeps up the aerial arsenal, with a twisting senton for a count of two.  Next, he goes for a splash, but Medina catches Zenshi and hits the corner turnbuckle for Snake Eyes.  Dazed, Zenshi faces Medina, who goes to the mask a final time, and (distracted) is nailed by Medina’s Eat Defeat kick for the pin.

Alicia comes to us with Breaking News (!) that the MLW doctor says Lawlor is injured.  How will this affect tonight’s main event?  We’ll find out since the card subject to change, after all.

Myron Reed cuts a promo and says he felt on top of the world, but got a dose of reality in the loss to Lio Rush and his Middleweight belt, but before he could process it, he got jumped by Contra Unit, and Daivari ripped his chest protector.  He’s not letting it slide, and promises the deliver the smoke to Daivari at Never Say Never. With that, let’s go to the next match… 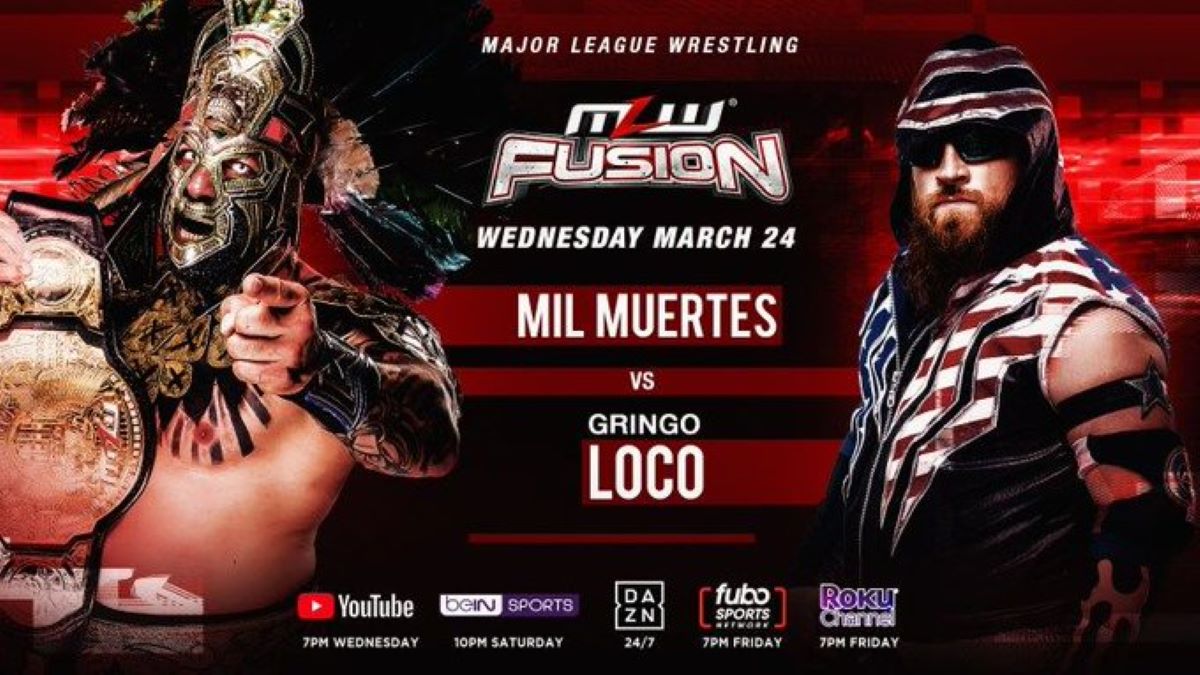 Ever seen a Chihuahua try to challenge a larger dog, with you knowing full well that dog is a yap away from getting mauled?  I have, and this match is no different.  Loco chops at Mil Muertes, but Mil no sells.  Loco gets flashy, but Mil cuts him in half with a spear.  Mil stomps away, grabs loco by the beard and punches him stupid.  Mil sends Loco outside, and rams Loco’s back to the edge of the ring frame.  Mil keeps clubbing away, and Loco dodges, while Mil hits the ring post.  Mil stunned, loco takes advantage and goes after the Man of 1000 Deaths, but Mil reverses to a tilt-a-whirl backbreaker.

Mil sends him back in the ring, and gets a two count.  Loco gets back momentum with a corkscrew senton, and then a low dropkick to Mil Muertes’ knees and a low Ace crusher to cover for a pin, but the ref barely gets a one count.  Loco hits the ropes, but Mil reverses to powerslam, but Loco kicks out at two.  Loco goes to the ropes for a handspring elbow, but Mil catches him and send him barreling to the corner.  Loco goes up top for a high risk maneuver, but gets caught again by Mil Muertes and sends Loco Straight to Hell with a pin.

Your Winner via Pinfall:  Mil Muertes

We send it to Your Boy Hammerstone, who’s upset by questions that he lost the MLW Openweight title.  He never lost it, he states, it was stolen by Mil Muertes, who hasn’t responded to his calls for a match.  So, no, Hammerstone officially challenges him April 14, and if he wins then he’s the champ, but until then Mil better not say he’s the Openweight champ until then.

Alicia Atout updates us that Lawlor has a torn bicep and cannot compete. The match is still on, but it will be just the Von Erichs versus Violence is Forever in the Chain Ropes match instead.

Calvin Tankman is all about that Heavyweight Hustle. He’s got a six year old, and will do what he needs to take care of family.  That also means going for the gold carried by Jacob Fatu, so he better be ready for the Hustle.

Now it’s time for the MLW Top Five Tag Team countdown, sponsored by Pro Wrestling Illustrated, and they are:

Bocchini updates us on the health of Bu Ku Dao, who will be out of action for 2-3 weeks, and TJP sent nasty tweets because he is ratcheting up his douchenozzlery.  Makes as much sense as anything else on Twitter these days because, that’s how to resolve things:  By tapping any peanut thought that enters your head.  And speaking of things that make little sense, here is your next match… 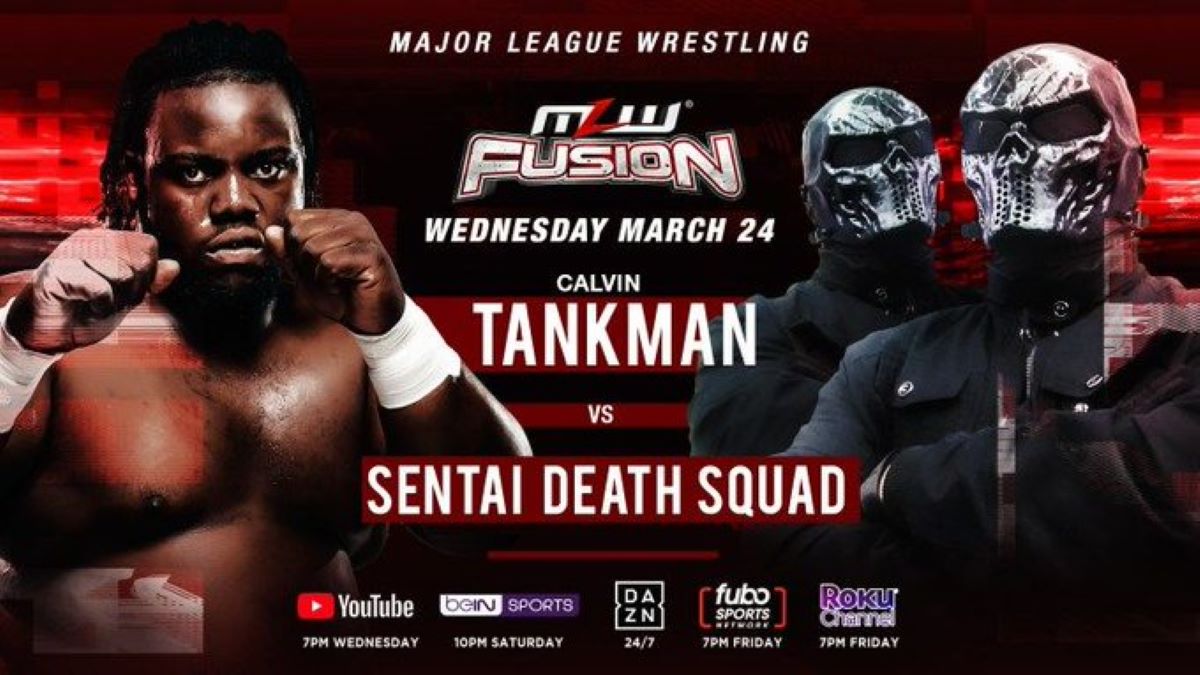 Last time, I promised if there was a squash match, I will deliver a squash recipe in its place.  Let me tell you, there is nothing finer than spaghetti squash, and I was able to find on Pinterest a really good recipe on how to roast and bake spaghetti squash.

As for the match, I can sum up in a sentence:  Tankman with a flying should tackle, spinebuster, and back fist to Zad for the three count

Your Winner via Pinfall:  Calvin Tankman

After the Match, Contra Unit comes out to lay into Tankman, but Tankman launches himself from the ring onto Fatu, Gotch, and Daivari on the floor, showing his Heavyweight Hustle.  Now Injustice comes to help, and Tankman does a Tankman driver to Daivari to send the point home that Contra Unit will not intimidate him.

Backstage, we have the Von Erichs ready for tonight, and they’re not surprised Lawlor chickened out. They’re still gonna get ready for Violence Is Forever, and will be whipping them with chains in the main event.

Outside the nightclub, a cameraman asks Salina de la Renta about Hammerstone’s challenge.  Salina laughs, and she says she accepts Hammerstone challenge.  Just then, the associate of El Jefe tells Salina he is not happy and wants to meet with her.  The cameramen gets a little too nosy and the associate shoves the camera away.

Backstage now to “Filthy” Tom Lawlor, who promises that the Von Erichs will pay in blood, and those chains will hurt them because Violence is Forever.

Alicia Atout is in the Never say Never Control center to confirm next week’s matches which will have:

Great matches to look forward to, but it’s now time for the Main event…

Lawlor comes out with his arm in sling.  From the moment the bell rings, it’s a Pier Four brawl with all combatants.  There is absolutely nothing scientific, and there is no quarter asked and none given by the Von Erich brothers.  Outside the ring, Lawlor has Marshalls hat, taunting him in the process.  This make Marshall madder, as he and Ross whip Ku and Garrini to the chains.  Since the ropes are replaced, there is no give, just unforgiving steel.  Well, Violence Is Forever returns the receipt and send the Von Erichs to the same links, where they get tangled up.

Garrini tries to take off one chain, and wraps around Marshall, while Ku works over Ross in the ring, with an Indian Deathlock, and transitions to a STF choke.  Marshall untangles and gets back in the ring and delivers a standing dropkick to Ku.  Dazed, Ross gets Ku with a running knee, and Marshall takes Ku to a choke slam.  Garrini gets back in with a heel hook to Marshall’s wrapped leg, but Ross dumps Ku on Garrini to break the hold.  Now all four men are on the mat, and as they rise it turns to a slugfest, but Violence Is Forever start to get the upper hand by crotching Marshall on the chain ropes (Owtch I felt that from my TV Screen!), and with Ross isolated, Garrini gets him in the Go 2 Sleep, followed by a vicious dragon suplex by Kevin Ku to cover but Ross kicks out at two.  Lawlor makes his presence known again as the ref is distracted by tossing in a foreign object…but Marshall catches it and uses it to punch out the Violence Is Forever members.  Now at full strength, the Von Erichs get their Iron claw/back body slam finisher to Garrini for the one, two, and three!

Your Winners via Pinfall:  The Von Erich’s

Lawlor seethes, as the Von Erich’s celebrate the win.

Solid matches, and although the squash match by Tankman wasn’t necessary, it served it’s purpose and kept the story moving forward, as Tankman and Injustice head to meet Contra Unit next March 31st.

The Chain Rope Match was quick, but the feud with Team Filthy and the Von Erich’s is far from over.  But do I want it to stop?  Well….I can still hear you saying you would never break the chain.

Enjoy that musical earworm, and see you in seven because….Never Say Never!