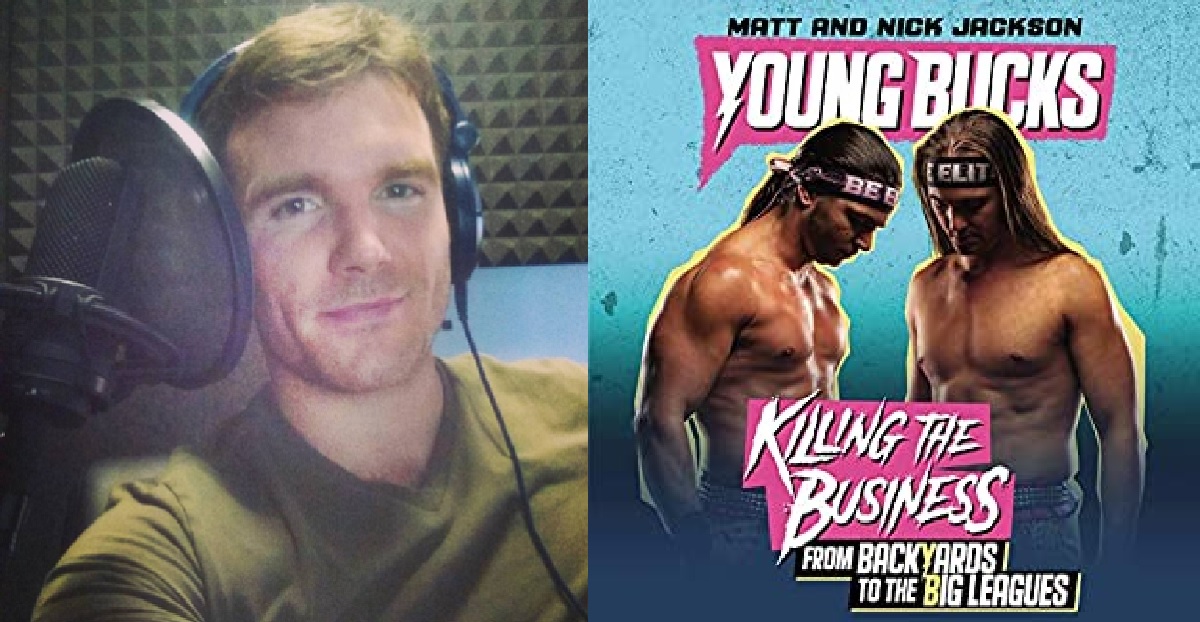 The Young Bucks’ autobiography, Killing the Business: From Backyards to the Big Leagues, was one of the best reviewed wrestling books in the past few years. In it, brothers Nick and Matt Jackson detail how they did whatever they could to pursue their dreams – breaking traditions, charting new paths, and basically not giving a f*** about what the haters said. 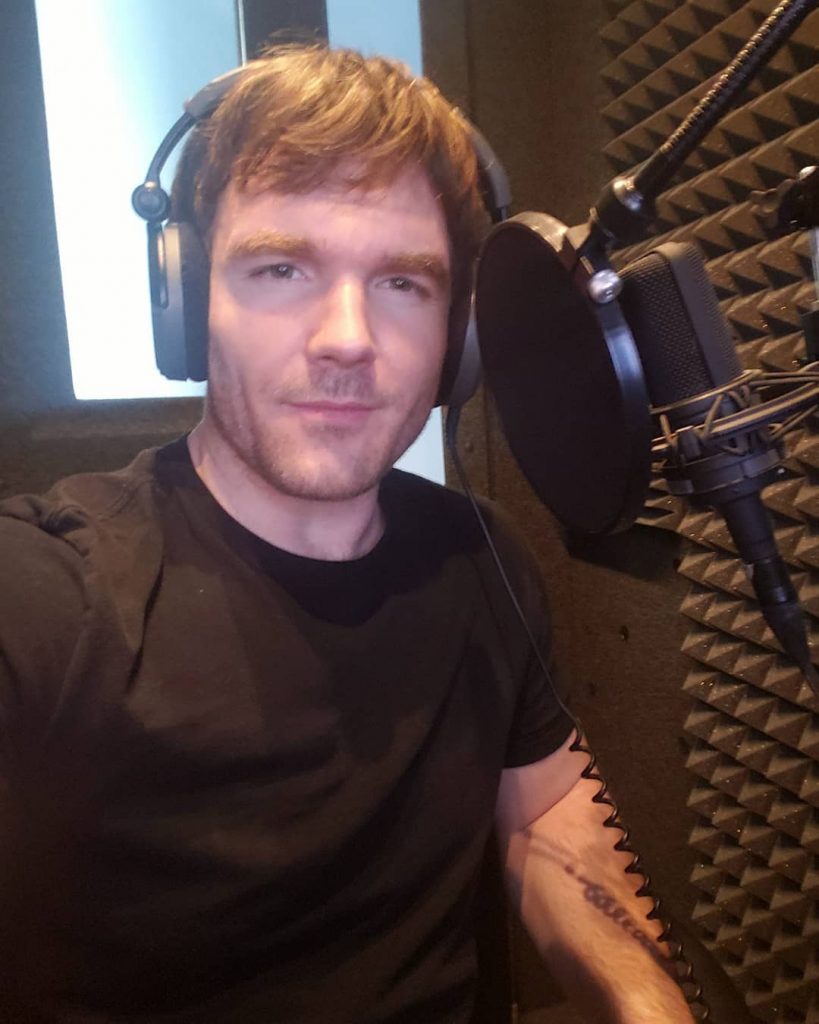 So it seems appropriate that the audiobook version of their book was read by actor Roger Wayne, who was also the voice of The Subtle Art of Not Giving a F***, one of the top-selling audiobooks of all time.

And while the Bucks’ book may not necessarily rival that book in terms of mainstream awareness, their book is still a welcome addition to Wayne’s lengthy resume.

With over 200 audiobook titles to his credit, Wayne is high in-demand by publishers looking for a seasoned performer. And the road that got him there isn’t at all what might have been expected from his original career in the Air Force.

“When I came back from the military, I finished up community college and got my Bachelors in Communication and Journalism,” he explained. “I actually had an acting scholarship – I had done some plays in college, and there was a guy there who was familiar with the University in Minneapolis, and I ended up getting an acting scholarship, but I didn’t actually major in theater. I started working in journalism, interning and stuff, but I discovered that it wasn’t really for me. The stories that I was passionate about made up such a small percentage of what I was going to be doing, so I ended up drifting away from that.”

“I still wanted to tell stories,” he stressed, “but I wanted to be able to tell different stories in a different way, and I thought the best way to do that was to (go back) to acting. I got into some commercial stuff and plays and things like that. From there, I worked with some agents, and they got me doing some light modeling and things like that, but there was only so much (of that work) in Minneapolis. I moved to Philly and then into Queens, and started working with an agent and eventually booked some TV work and some commercial stuff, and then went on from there.”

Wayne’s move to audiobooks allowed him to blend all of his previous experiences and capitalize on his various performing skills.

“I was a broadcast journalist in the military,” he explained, “so I knew I could work with my voice. I knew that narrating books was something that I could do that I probably had a knack for. When I got introduced to Audible, and started to work for them, they introduced me to some of the other companies, and it kind of went from there.”

Since 2015, audiobook narration has been Wayne’s primary work. Wayne says he works on about 30 to 40 projects a year.

The Young Bucks’ book wasn’t the first pro wrestling book that Wayne has done. In 2014, he was the voice for Chris Jericho’s third autobiography, The Best In The World: At What I Have No Idea.

“I watched wrestling as a kid, and obviously I knew about Hulk Hogan and Andre the Giant, and all those classic matches. But as I got older, I drifted away from (wrestling) so I wasn’t really familiar with who he (Jericho) was. But I was really interested in trying to properly tell his story, and it was fun to get back into that world again. A long time went by before Harper reached out to me to do (the Bucks’) one.”

Wayne isn’t certain why his name came up for this particular project, as that decision is made by the publisher. Speculating, he believes it’s a combination of the company’s familiarity with his past work, and just being what they think will be a good fit for the story.

“I think I have certain niches that they like me for,” he offered. “I’ve done a lot of different things: sci-fi and non-fiction, self-help books, instructional books on mountain climbing, fitness, action-adventure, militaristic works. For the (Bucks’) book, I suppose they think I had the vocal quality that they were looking for, but also the kind of personality that would (suit) the book.”

The right personality is key to making a successful audiobook, as it’s not just a matter of simply reading the words. Rather, an actor like Wayne needs to channel their personality and their skills in a way that ensures the story is told in a way that’s compelling, authentic, and true to the authors’ intentions. Depending on the nature of the project, that requires a certain amount of pre-work before actually starting the recording process.

“I try to do some digging in advance,” Wayne said about his process, “And (the publishers) may send me some stuff beforehand, or I may have some stuff they send to me. Often it’s just on the pronunciation of certain words or names of people. But I don’t dive too much into the books. I read the synopsis to learn what it’s about, and skim through them. In the case of the (Bucks’) book, I didn’t read the book at all (in advance). I think that may sound kind of crazy, but (when you’ve) done so many of these, you kind of know where you’re heading.”

“You know enough to not make ridiculous decisions, like ‘okay, I’m gonna give this guy a Russian accent when he’s from Norway’ or something like that. Of course, stupid things can happen, but making a big mistake is pretty rare.”

In those rare situations, Wayne notes that the feeling can often be like how a wrestler feels after a botched move. And just like those wrestlers, Wayne will hear about it from wrestling fans.

“There are a lot of passionate wrestling fans,” he laughed. ”There were a couple of times, I think, where I may have mispronounced a wrestler’s name or something. And I can’t believe it snuck through there – after my research, and then Harper (Publishing) goes through it – but sometimes stuff still gets missed. So for the most part, people are happy with it. But it hurts me when I see, you know, five-star review, five-star review, and then somebody says ‘he messed this up – three stars.’ It sucks to see that. But that’s the nature of the beast sometimes. There are always a few (of those types of) folks, and I acknowledge it and try to make sure it doesn’t happen again. But you’re dealing with a really passionate audience, so you definitely have to be careful.”

Overall, though, Wayne was very pleased with how his performance was received. An audiobook is a unique medium in that in most cases, a single actor has to act as both the narrator and play all the characters in the book. There are exceptions, of course, and Wayne has done his fair share of books that were performed by an ensemble. But the Bucks’ book was a solo performance. And since the book was authored by both brothers, he had to come up with two voices that were distinctive enough to be true to the way it was written.

(An extract from the Young Bucks’ audiobook, courtesy of Audible.com)

“I think it was kind of a little bit of artistic luck,” he said, about the process he used to come up with the voices that appropriately fit the personalities of Nick and Matt Jackson. “I kind of looked at what the book was about – these two brothers growing up, and how they slowly grew their interest in wrestling, and grew into their fame. And I thought, ‘okay, we’ve got an older brother and a younger brother,’ so I tried to come up with voices that would create a separation between the two. For Nick, I used a slightly lighter (pitch), and for Matt, I added a slight kind of gruffness in there. And actually, in one of the reviews I saw online, somebody wrote that there were points in the book where I actually sounded like they do, so I thought that was cool.”

While that choice wasn’t necessarily a conscious decision going in, it’s those types of instincts that have helped Wayne garner industry acclaim (including a 2020 nomination for an Audie, which is the audiobook version of the Oscars), and made him a highly sought-after actor in the genre.

“I’m pretty fortunate,” he said, modestly. “With the pandemic, actors who were making a lot of their living, whether they were in theater or musical theater in New York, that stuff just stopped. It definitely affected certain opportunities for me – I had auditioned for HBO a week before (everything got shut down), so I didn’t hear about that. But the audio stuff was pretty solid – I didn’t really skip a beat. I mean, I was recording every week (in my home studio), and so I was just kind of able to go about my business.”

With more audio projects currently booked through May of 2021, Wayne is also up for other acting opportunities as well in TV and movies.

“A little over a year ago,” he said, “I was on Blue Bloods, I had a little scene with Tom Selleck. And then an independent film I did years ago was recently put on Amazon, and I’m (auditioning for other roles) when they come up. I’d like to do a lot more TV and film stuff.”

“And I also want to get into other areas of voiceover,” he added. “I really want to get into video games and even maybe some animation stuff, and I’m trying to find my way in there. I know that I can do it. I just have to find the right (agent). A lot of that stuff takes place in LA, but I’m trying to get my foot in that door along with the books.”

And would Wayne be interested in doing the audio for more pro wrestling books?

“Oh, yeah,” he said with no hesitation. “I like to think I do justice to these stories, and I think I do a good job of telling these guys’ stories. I really try to make the writers proud and give the listeners an experience that is as entertaining as possible and as true to the book as possible. To me, the best thing that can happen is that you hear that the author thought you did a great job. If you can make them happy – I mean, they wrote the book, that’s their words. If they liked it, then that’s pretty much the cherry on top.”