SmackDown: The Friday before Fastlane 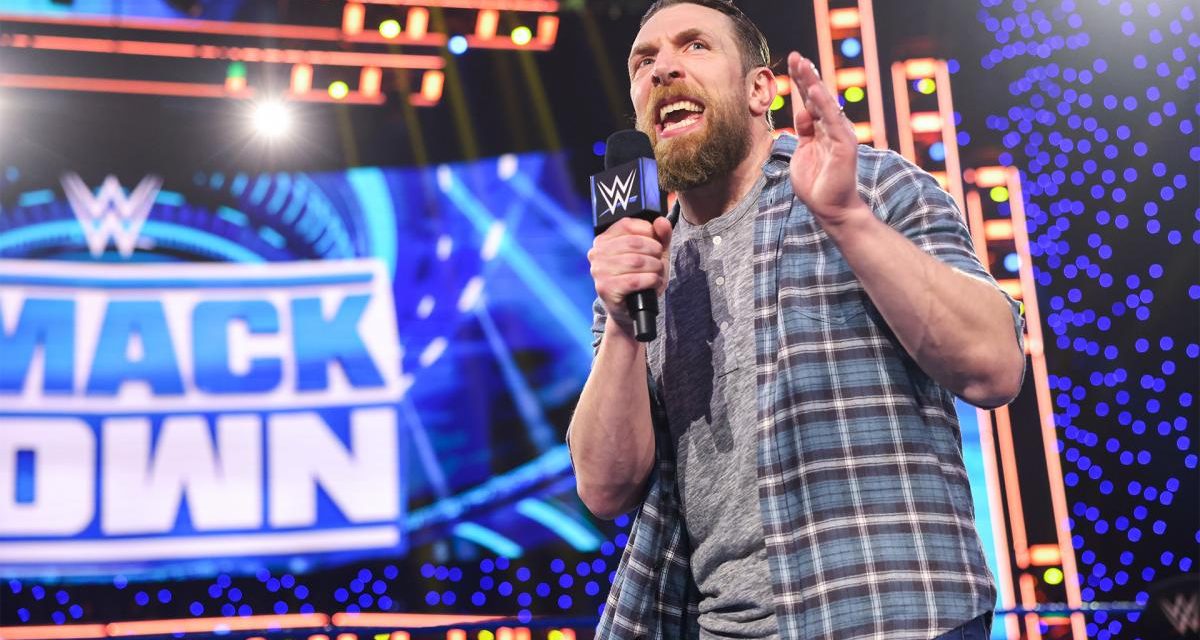 Featuring a match for the SmackDown Women’s Championship, this March 19th episode of SmackDown also contains a match to decide who will be a special ringside enforcer at Fastlane.

We kick off the show with Nia Jax VS Sasha Banks.

Jax starts off the match with predictable cockiness, shoving Banks. Banks slaps her challenger and then sucker kicks Shayna, before delivering an enzuigiri to Jax and a headscissors into the turnbuckle. She delivers a double knees and looks for the Bank Statement, but Jax reverses it and drops Banks with a back elbow. The Irresistible Force gorilla presses the champ for 2, and follows it up with a slam and an elbow drop for another 2. Jax delivers a Samoan Drop for a close 2, and Belair makes her entrance to cheer on Banks as we go to commercial. 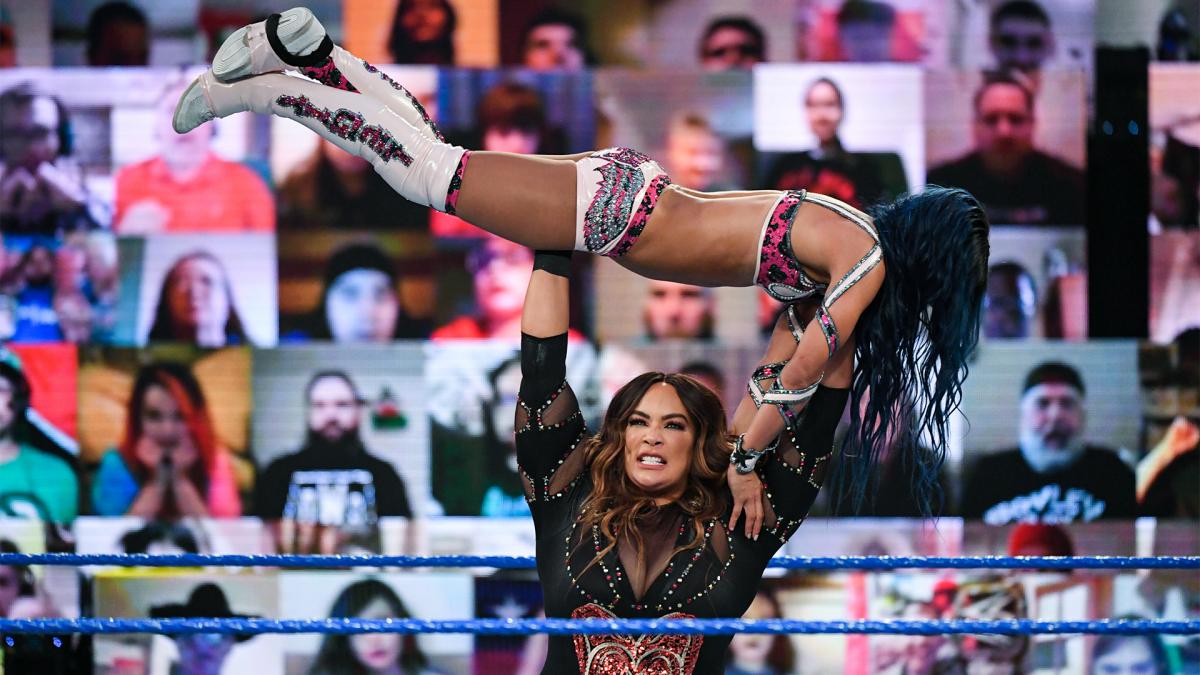 Nia Jax shows off the strength that helped her injure many a Superstar. Photo: WWE

When we come back, Banks is fighting her way out of a chinlock. Jax stops her momentum easily with a sidewalk slam that gets her a 2 count. Jax locks in the Stretch Muffler, and swings Banks by her leg into the turnbuckle, getting yet another two count. Frustrated, Jax locks in a submission, but Banks fights out of it. Jax goes back to the Stretch Muffler, but Banks turns it into a roll up. Jax resists it, and tries to sit down on Banks, but the champ moves and delivers a meteora for 2.

Jax tosses Banks outside the ring, and Banks comes back in and locks in a sleeper hold. Jax tries to reverse it into a Samoan Drop, but Banks avoids it and delivers a brutal DDT before locking in the Bank Statement. Shayna comes in and tries to break up the submission, but Banks moves and kicks Jax right in the chest. Belair comes in and tosses Shayna out of the ring, and Banks rolls up Jax to get the win.

Kayla Braxton interviews Edge about his match with Jey Uso later tonight. He says as long as Jey keeps walking in the shadow of Roman Reigns, he’s going to run into trouble. And tonight, Edge is that trouble.

Seth Rollins comes out to, once again, talk about Cesaro, who lives rent free in Rollins’ head these days. He says that Cesaro is jealous of his success, and shows us a lovely video package of Rollins attacking Cesaro last week. He mocks the Swiss Cyborg, and says that he’ll never be humiliated by Cesaro again. Shinsuke Nakamura interrupts him, grabbing his mic and telling him to shut up. Rollins tries to attack Nakamura, but he gets a kick, an STO, and a Kinshasa for his troubles.

With Dolph Ziggler and Robert Roode on commentary, Dominik starts off against Ford, and the two trade holds and arm drags. Ford goes for a suplex, but Dominik lands on his feet and tags in Rey, who delivers a dropkick to Ford for 2. Ford tags in Dawkins, and the two deliver an assisted splash for 2, before Dawkins delivers a spinning splash. He tags Ford back in, but Rey headscissors Ford into position for the 619.

He tags in Dominik for the double 619, but Dawkins drops Rey with a right. Dominik catches Dawkins with a hurricanrana, but Ford turns him absolutely inside-out with a clothesline, before slamming him for a close 2. Ford tags in Dawkins, and they look for the Doomsday Device, but Rey knocks Ford off the top rope and Dominik rolls Dawkins up to get the win. 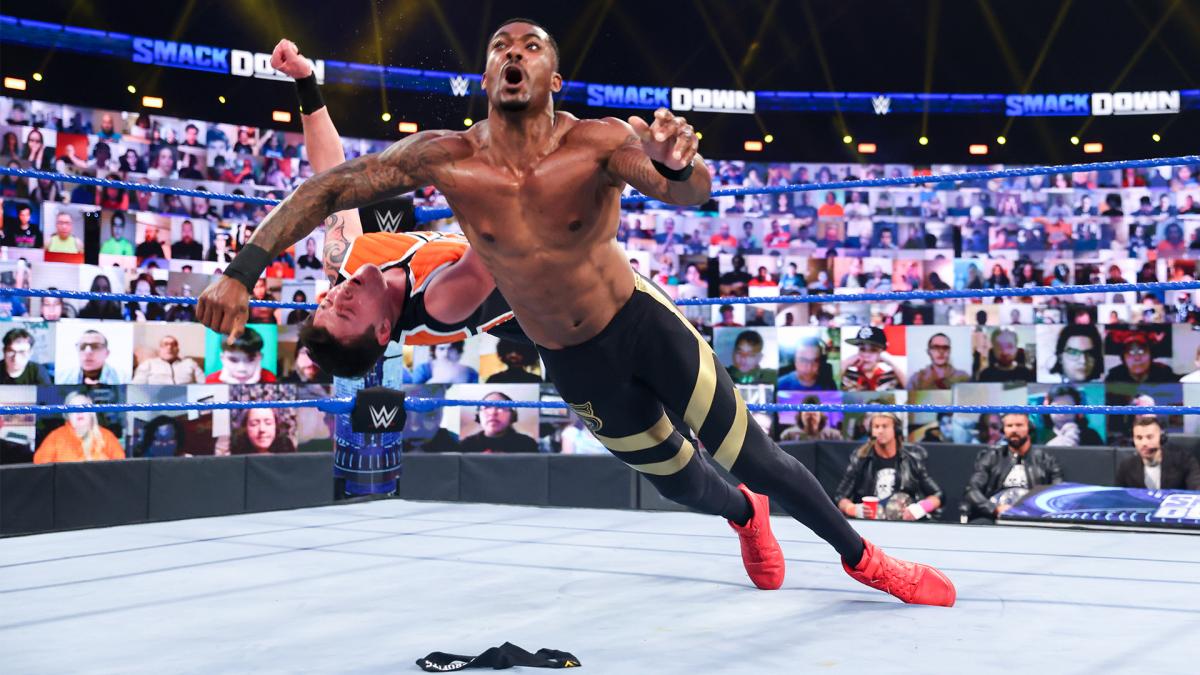 This photo really doesn’t do the clothesline justice, it was awesome. Photo: WWE

After the match, Otis and Chad Gable come out to smack talk the Mysterios, but they get dropkicked out of the ring.

The match begins during commercial, so the first thing we see of it is Chad looking for a superplex, but Rey shoves him away and hits a flying senton. Rey sets him up for the 619 and hits it, but Otis goons him on the ropes before he can follow up with the splash. Chad tags in Otis, and he suplexes Rey before Otis delivers a headbutt and a series of slams. Otis delivers a double ax handle and locks in a bear hug.

Rey bites Otis to escape the hold, and both men tag in their partners. Dominik delivers a series of clotheslines before rolling up Chad for 2. He delivers a tornado DDT, but Otis breaks up the pinfall. Rey attacks Otis, but the big man overpowers him and slams him on the barricade. Dominik sets up Chad for the 619, but Chad reverses it and tags in Otis. Chad delivers Chaos Theory and Otis crashes onto Dominik with a splash to get the win.

Backstage, Sami Zayn dictates to his documentary crew, and Kevin Owens interrupts him. Owens tells him that he’s delusional (I summarized it), and Sami invites him to be at ringside for his match with King Corbin, and if K.O. doesn’t see any conspiracy, Sami will leave him alone.

Daniel Bryan comes out to talk about the whole “guest enforcer” thing. He says that Edge may mess up Bryan’s Fastlane match because he’s scared of facing Bryan. The Leader of the Yes! Movement says that he’ll tap out Roman at Fastlane just like he tapped out Jey Uso. Roman interrupts him to say that Bryan doesn’t have a chance, that he would rather die in the ring than tap out to him. A little extreme, but what do I know, I’m only the target audience of the TV show. Bryan calls Roman delusional, and that he is going to break him.

Before the match, they show a snippet of the interaction between Sami Zayn and Logan Paul on Twitter. Logan Paul. For those of you who’ve never heard of Logan, first of all, I envy you. Second of all, he’s a YouTuber, who while on a trip to Japan, found and filmed the body of someone who had committed suicide for a video that got 6 million views before being taken down. You can look into him further if you wish, but the point is WWE may be bringing in a man who vlogged a dead body. This company has fallen to a new low that I did not even think was possible. They’ve hired a convicted rapist like Mike Tyson, and now they’ll potentially add this demented individual to their list. This is an absolute disgrace. And the fact that Sami Zayn, with all the amazing humanitarian work that he has done, is getting saddled with a man who vlogged a dead body, is an awful slap in the face to poor Sami.

There’s no easy way to segue from that to a match, so I’ll just not even try. With Kevin Owens on commentary, Sami fights dirty against the King, raking his eyes and choking him on the ropes. Corbin fights back with a clothesline and a series of rights. Corbin looks for a spear in the corner, but Sami moves out of the way and rolls him up, but he uses the ropes for leverage and the ref catches him.

Sami tries to take the turnbuckle pad off the turnbuckle, but the ref stops him. Corbin grabs him from behind, delivers the End of Days, and pins him for the win. 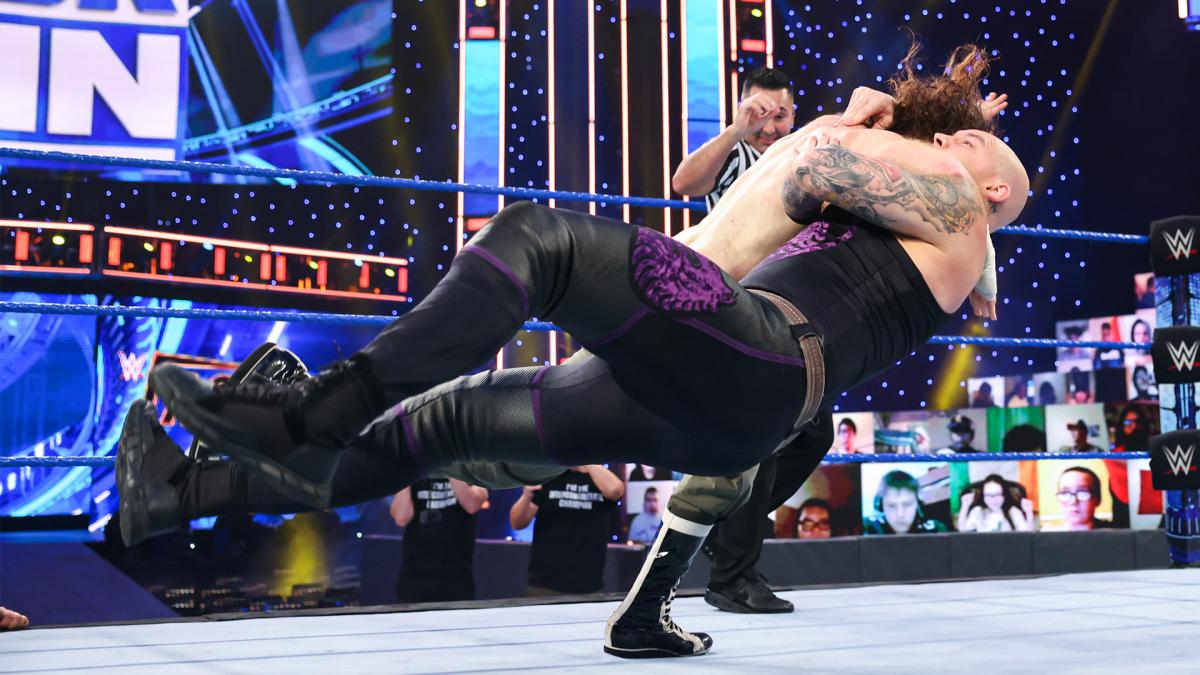 King Corbin with the End of Days to Sami Zayn. Photo: WWE

After the match, Sami asks Owens if he saw the conspiracy. Owens says no, he only saw the ref making the right calls. Sami snaps, delivering a Helluva Kick to Owens, leaving K.O. in pain on the floor.

Big E and Apollo Crews have a poorly lit Zoom call. Michael Cole asks them if they’ll ever reconcile after this. Big E gives an emphatic no, telling Apollo to enjoy the two days he has before Big E brutalizes him at Fastlane. Apollo tells him that he’ll beat him at Fastlane, and then stand over his mangled body. Big E says there’s no waiting for Sunday, and gets in his golf cart to find Apollo. He catches up to him backstage, and slams him side to side, from wall to wall. The refs break them up, and Apollo gets into Big E’s golf cart and rides away.

Belair tries to slam Shayna, but Shayna gets out of it and delivers a kick to her opponent. She tosses Belair to the feet of Jax out on the floor, but Jax simply walks backstage. Belair catches Shayna with a spinebuster for 2, and Natalya and Tamina attack the two, ending the match. They toss Shayna over the announce table, and Tamina delivers a Black Hole Slam to Bianca.

With Daniel Bryan on commentary, Edge starts off by proving his prowess, simply out-wrestling Jey Uso and pinning him for a quick 1. He strikes with a series of knees before targeting the arm of Jey. Edge goes outside to collect himself, and Jey goes outside to attack him, slamming him into the steel steps. Jey flies into Edge with a suicide dive as we go to commercial.

When we come back, Jey is attacking the injured ribs and back of Edge. He grabs the Rated-R Superstar and tosses him at the turnbuckles, but Edge slides and slams ribs first into the ringpost. Edge tries to fight back, but Jey goes right to his ribs with a kick to slow him down. The two collide in the middle of the ring, but Edge’s injured ribs take the worst of it. They both get to their feet, but Edge strikes first with a kick before continuing his assault on the arm of Jey with a flying knee for 2. 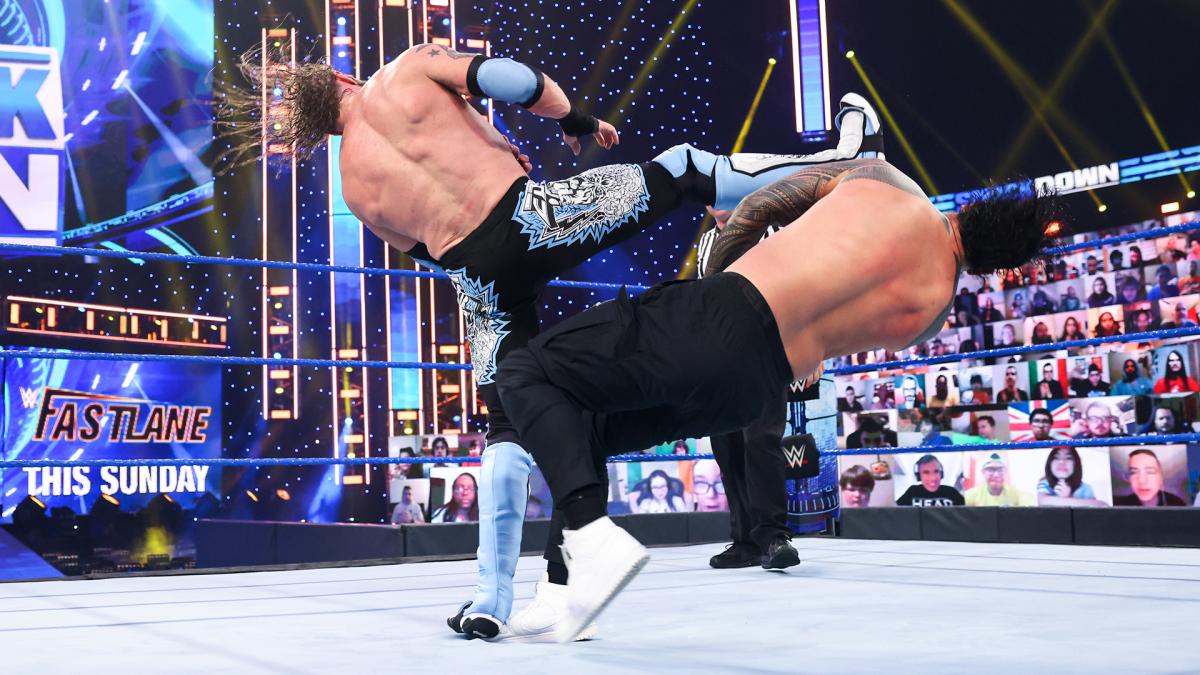 Edge looked a lot better tonight than he has the whole time since he made his return two Rumbles ago. Photo: WWE

Jey fights back with a Samoan drop for a close 2, and he goes up to the top rope to look for his Uso Splash, but Edge meets him at the top to deliver an avalanche hurricanrana for a close 2 of his own. Jey goes for a superkick, but Edge reverses it into an Implant DDT. The Rated-R Superstar looks for a Spear, but Jey catches him with a superkick. He delivers the Uso Splash, but his injured arm prevents him from pinning in a timely manner, and Edge kicks out at 2.

Edge pops right back up and slams Jey’s arm to the ground before delivering a Spear to pick up the win and become the special ringside enforcer for Roman Reigns VS Daniel Bryan at Fastlane.

After the match, Roman spears Edge, and trash talks Bryan. Bryan goes after him, but Jey attacks him from behind, and Roman hits him with a spear as well.

A well done go-home show, I’m excited for all the matches I’m supposed to be excited for, except the Women’s Tag match. All I can do in regards to those titles is just wait until Tamina and Natalya get them and make something of them.