Writing one book is a challenge, but when the writer has written two bestsellers, the third book may start to lose momentum — unless your name is Chris Jericho. With The Best In The World At What I Have No Idea, Jericho proves that he still has plenty to write about. 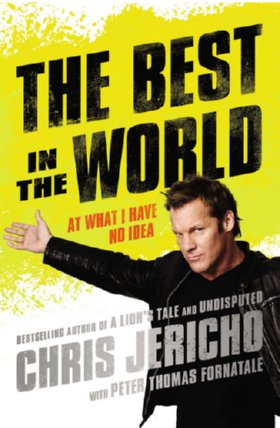 The 401-page tome, written with Peter Thomas Fornatale, starts in 2007, with Jericho’s return to the WWE after a series of “Save Us” vignettes were shown months before, and after a less than great fan excitement in the return, Jericho called the return “forced,” and “I didn’t even buy it and I was the one trying to sell it.”

Jericho writes that his heel character in 2008 was inspired by actor Javier Bardem and former AWA Champion Nick Bockwinkel, where he toned down the comedy, talked in a low-toned voice while wearing suits, which lead up to a 2008 feud with Shawn Michaels, which Jericho describes in several chapters. Jericho writes that the feud was to be a one-time match, but ended up lasting seven months. Jericho recalls during that time he was supposed to have a future TNA wrestler be his second before the late Lance Cade was chosen.

Jericho shows his brand of humor, especially telling his interactions with several excited fans hitting him with glow sticks, batteries, and other objects. He also describes his interactions with celebrities such as Tom Cruise, Ozzy Osbourne and Kid Rock. His detailed account with actor Mickey Rourke leading up to a WrestleMania appearance in 2009 is worth the time to read, especially with WWE owner Vince McMahon’s comments after Rourke brought an entourage during the pre-show meeting.

Jericho discusses his relationship with Vince McMahon after Jericho’s story ideas got shot down, and McMahon fined and suspended him after trying to created a heel moment in San Paulo (Jericho writes he found out he was suspended on the WWE website), along with his disagreements with the owner when Jericho wanted to experience acting jobs outside the WWE. But this is not a bashing Vince McMahon book, but one that no matter how few their differences were, there was a respect between them, along with several humorous stories of them together — including one time when he convinced Kofi Kingston to challenge McMahon.

There would not be a Jericho book without his metal band Fozzy. The tales in this book include road stories traveling to meeting several famous musicians, including a great story involving Aerosmith guitarist Joe Perry when Chris hosted Revolver Magazine’s Golden Gods Awards show. Jericho writes about meeting Metallica, opening for Anthrax, and getting to play at The Download Festival in England. His appearance on the American television show Dancing With The Stars is detailed, where Jericho claims former WCW Wrestler Diamond Dallas Page saved Chris’s wrestling career after the show was finished. He also explains how Alice Cooper, Megadeth’s Dave Mustaine, and singer Alicia Keys inspired one of his famous ring jackets.The many stories that are told in the book are almost too much for one review without giving away the whole book, but Jericho takes the reader through his wrestling programs with CM Punk, Rey Mysterio, Edge, and his Elimination Chamber match in 2010 where the Undertaker got burned walking to the ring by a pyrotechnic accident, in which Jericho writes that ‘Taker “almost been burned alive and still put me over for the world title.” Jericho also talks about his program with tag team partner The Big Show, his famous reply when a fan was heckling him that responded with “I’m from Winnipeg, you idiot.”

Jericho may have “no idea” at what he is the best in the world at, but he knows how to tell compelling and entertaining stories in another exciting book.