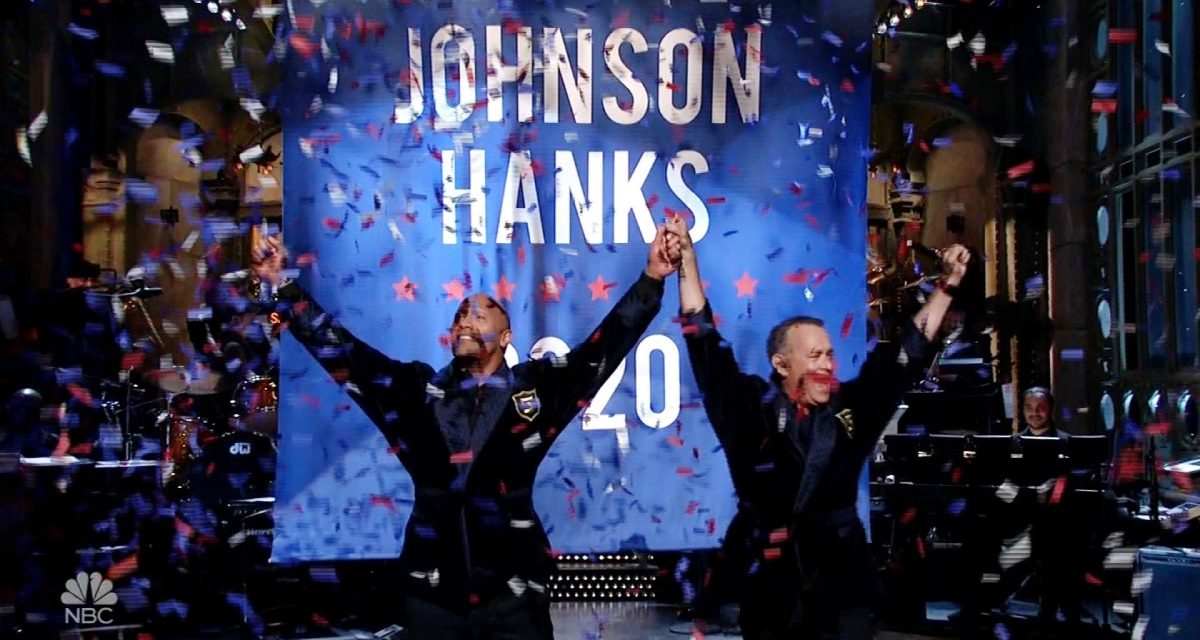 “I’m Dwayne Johnson, and I approve this message.”

Those were the final words spoken in last week’s episode of Young Rock, titled “Forward Together.” In every episode, Johnson has been featured as a year-2032 version of himself, running for President of the United States. In a show that offers glimpses into four different stages of Johnson’s life, the time period of the future has him making overt pleas to the American people that he’s an everyman, ready to roll up his sleeves and get to work for the country.

Expect more of the same in future episodes (Tuesdays at 8:00 EST on NBC).

Look, let’s agree on one thing without getting too political: the door to the United States’ presidency is now seemingly wide-open to anyone who captures the public interest. That may sound obvious when speaking of a democratic election process, but the days of cutting one’s teeth in the trenches of Washington before attempting to ascend to the highest office in the country are over, at least for now. So, considering that Johnson’s past has plenty of brushes with political statements, comedy, and just a little bit of smack talk, the question seems to be: will the real-life Dwayne Johnson wait until 2032 to actually go for it?

Johnson’s political arrival occurred in 2000, with appearances at both the Republican and Democratic National Conventions. While he appeared at the Democratic Convention (along with Chyna) as part of the then-WWF’s “SmackDown Your Vote” campaign to encourage their audience to get involved with the election, Johnson took more of a front-seat role at the Republican event. After making a full-blown entrance complete with theme song (honestly, if you had one, you’d use it everywhere, too), Johnson riled up the crowd of politicians and political groupies like he was hyping next week’s main event before stepping out of character to thank the convention organizers for inviting him.

He also reminded them that, through someone like himself, the Republican party had a chance to access the millions (and millions) of wrestling fans and try to earn their votes. The most interesting parts of Johnson’s speech on the stage and his comments to reporters on the floor are strikingly bi-partisan. It seems, whether he he was acting on instruction or on his own, that The Rock was not there to make waves, but to deftly encourage all voters to simply engage.

While the on-air C-Span host Susan Swain is heard in the above video to begin to question what it means to have celebrities making appearances at political events (and reporter Steve Scully rather brilliantly demonstrate how far apart politics and celebrity used to be, as he had no idea who Johnson was), The Rock came off as a polished speaker who exhibited a whole different side to his personality, beyond what he paraded around the WWF ring.

Johnson didn’t have much time for politics over the next several years, what with transitioning from the top of the WWF to the top of Hollywood and all, but he did manage to create a memorable recurring character on Saturday Night Live that at least got him into The White House, as he played “The Rock Obama” for laughs as the angered version of President Barack Obama.

It wasn’t until about the mid-2010s that you could hear little snippets of presidential talk now and then from Johnson. In an interview with GQ magazine in June 2016 that he said: “I can’t deny that the thought of being governor, the thought of being president, is alluring. And beyond that, it would be an opportunity to make a real impact on people’s lives on a global scale. But there are a lot of other things I want to do first.”

It’s not hard to see why a statement like that caught people’s attention. Nothing came of Johnson’s talk, though he appeared again on Saturday Night Live to announce his unbeatable ticket with Tom Hanks to run for President in 2020. Again, nothing came of it.

In real life, the Republican National Convention of 2016 welcomed another entertainment world outsider in Donald Trump, who parlayed a growing devotion among voters all the way to the presidency. Johnson’s political activity during Trump’s years in office were again muted, but certainly more pointed than in his past. As Johnson was on his way to becoming to “most followed man in America” in late 2020, he had access to a large audience. On occasion, he would use the platform to direct messages at not only Trump but government leaders in general, keeping alive the feeling that perhaps he felt he had a better way to do things.

His most heartfelt plea came in the aftermath of George Floyd’s death, as America fought itself as much as it fought injustice, when Johnson presented his feelings in a lengthy and stark recorded tweet. It wasn’t a stump speech, but it might as well have been.

When you compare the calm nature of Johnson’s appeal in this video to his normally amped-up persona, it hearkens back to his appearance at the 2000 Republican National Convention. When put in a position to make a political appearance or statement, you might expect to get The Rock hurling juvenile insults around, but that’s not the character that Johnson has shown that he wants to bring to those conversations. Instead, it’s when he seems at his most sincere and focused.

This is what makes the segments on Young Rock in which Johnson seeks the voters’ confidence seem so different compared to the other segments. In seeing Johnson as a young kid, a teenager, and a young man, we are watching a sitcom-version of his true life story. It’s not a documentary; it’s not even a bio-pic. The show embraces the bizarre situations in which Johnson found himself growing up and plays for an impressive mix of sentiment and comedy. When he’s on the campaign trail in the show, it really does sound like the Dwayne Johnson we hear whenever he does wax political. That’s what makes it all feel so sublimely real, as if he’s been dipping his toes in the water for years and now he’s finally getting ankle-deep.

I expect we’ll have our answer soon enough, and we’ll certainly know before 2032 whether The White House will be making substantial upgrades to its weight room.