Romero sifts out ‘the fact from the fiction’ in Rock bio 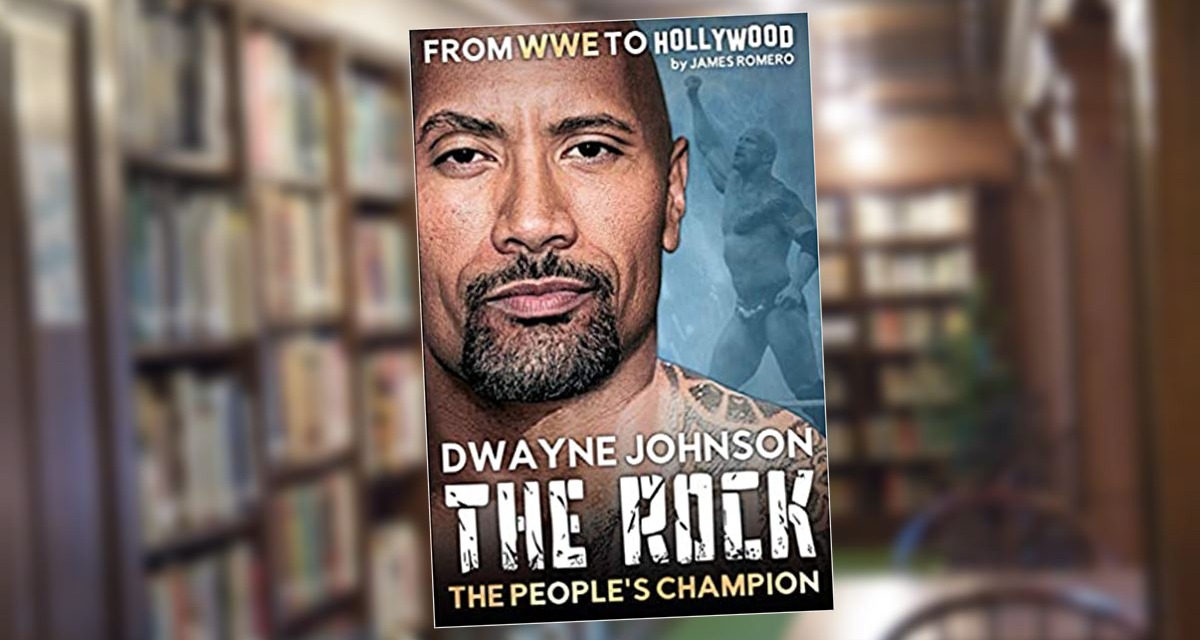 About a month after the publication of his first book Owen Hart: King of Pranks: The Ultimate Anthology of Owen’s Greatest Ribs, Pranks and Stories, author James Romero started thinking about the follow-up. “I kept finding myself landing on writing an honest biography of The Ultimate Warrior,” Romero recently revealed in an interview with SlamWrestling.net. “Then I reasoned that it would be near impossible to market a Warrior book without getting into a legal wrangle, considering his family own the name, the face paint and the logos – The Jim Hellwig Story – with an outline of a wrestler wearing arm tassels is hardly going to fly off the shelves. I was then torn between writing about Hulk Hogan and The Rock. The Rock won out not only because his 2000 autobiography was pretty underwhelming but practically no books have been written about him since. No good ones, certainly.” 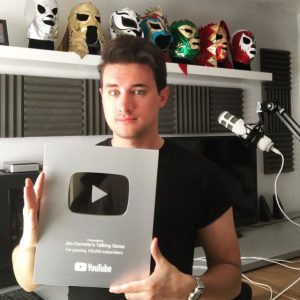 At the same time, Romero acknowledged that there were some significant challenges involved in telling the life story of The Rock a.k.a. Dwayne Johnson, surely one of the most recognizable and written about, personalities the world over. “I wanted to tell the complete, in-depth story from the beginning to the present day on one of the most famous people on the planet,” said Romero, “and until now that story had never been done with any sort of genuine research or quality. If I added anything to the story of The Rock, I would say it was sifting out the fact from the fiction. Dwayne, like many entertainers has a habit of exaggerating both his successes and hardships, so I felt it important to challenge some of his claims and write the most accurate account of his life possible.”

The end result Dwayne “The Rock” Johnson: The People’s Champion – From WWE to Hollywood, out now and self-published, is a well written, thoroughly researched, 353-page book that explores the life of the most electrifying man in sports entertainment, with a pronounced emphasis on Johnson’s wrestling side and a little less so on his subsequent career as one of Hollywood’s most bankable stars, a fact readily admitted to by the author.

Confessed Romero, “I would have loved… LOVED… to write more on Dwayne’s personal life. The problem that I knew I was going to encounter early on is that very, very few people know the real Dwayne. The co-workers I spoke to really didn’t add anything I didn’t already know and I believe Dwayne wasn’t a huge partier or socializer after the shows. He really kept to himself. Dwayne has always been highly adept at only releasing personal information that he wants you to know, whether it be on his social media or interviews. Even in 2000 when his celebrity was reaching the masses, he conducted himself like a polished pro – highly media trained, savvy and engaging – but not an open book. The reason I don’t go as in-depth on his movie career as I do the wrestling side is because he rarely has anything genuinely interesting or controversial to say about his projects – 100 pages of Dwayne quotes gushing over how much he loved his co-workers and enjoyed working on every production he’s ever been in would be beyond tedious! The fact is, Dwayne’s WWF/WWE (World Wrestling Federation, now World Wrestling Entertainment) career is so much more interesting and has so many more fun stories and crucial happenings along the way that The People’s Champion was always designed foremost as a wrestling book with a wider view of his life before, after and during his wrestling days.” 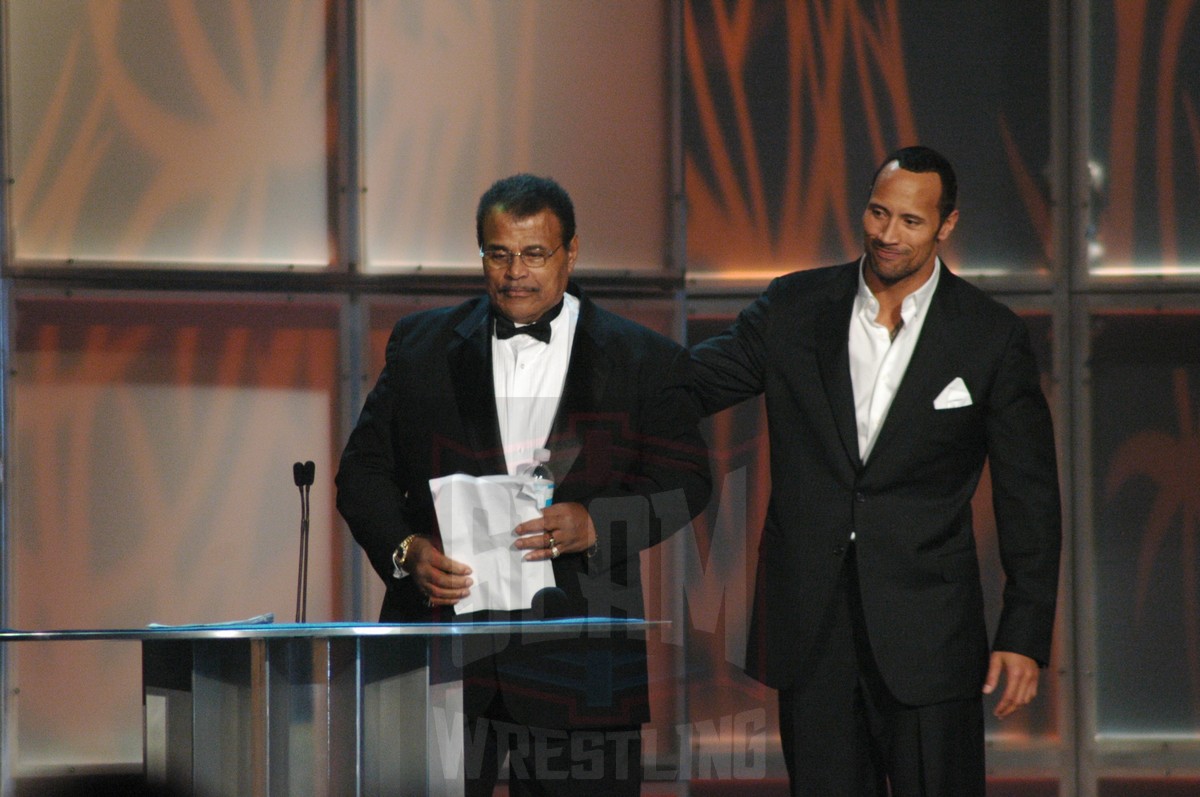 Dwayne “the Rock” Johnson inducts his father, Rocky Johnson, into the WWE Hall of Fame in 2008.

Where the book is undoubtedly the strongest is in presenting Johnson’s main run with the WWF/WWE from 1996 to 2002, and while that story has been well told and is fondly remembered, Romero was able to discover through his research some new and valuable insights. “I found myself thinking how easy Dwayne’s path to stardom was,” reflected Romero. “I’m not saying in terms of working on his physique, promos or actual in-ring effort, but just how quickly he was picked up by the WWF in 1996 when more proven wrestlers were turned away around the same time period. Dwayne had the looks; he had the height and he had the connections. He had everything going for him.”

Beyond that Romero also found himself reevaluating one of the most controversial pro wrestling figures of the time – Vince Russo. “I’m a big Jim Cornette booster, but Russo doesn’t get the props he deserves for The Rock or WWF’s success during the late-1990s. As many stupid things as Russo did during his tenure as head writer (and I dump on him plenty in the book), his good work with the WWF outweighed the bad and I think his work with The Rock – whether on promos or just allowing Dwayne free reign to be who he wanted to be – remains underappreciated. He’s a truly talentless writer and story teller, but he similarly had some great and fresh ideas that worked when they were implemented properly. Rock was never the same after Brian Gewirtz was installed as Dwayne’s personal scriptwriter.”

And then there’s Johnson’s departure from the WWE in 2002. “While it’s purely speculation on my part, during the writing of the book I also got the impression that when Dwayne pretty much left wrestling behind in 2002, it had more to do with a number of negative receptions across the country than Dwayne would probably care to admit. It’s a lot easier to walk away from something if you don’t feel valued.”

Dwayne “The Rock” Johnson: The People’s Champion – From WWE to Hollywood is the most in-depth, complete story of Johnson’s rise from mediocrity to superstardom that has yet been produced, with all the highs, lows and controversies in between.

And while super hardcore wrestling fans may not learn a huge amount of new information from the book, The People’s Champion is extensive, packed with quotes from his friends, family, co-workers and the man himself, culled from a wide variety of source material, and as a result it stands out as the most comprehensive look – so far – at one of the pre-eminent superstar’s in sports entertainment history.