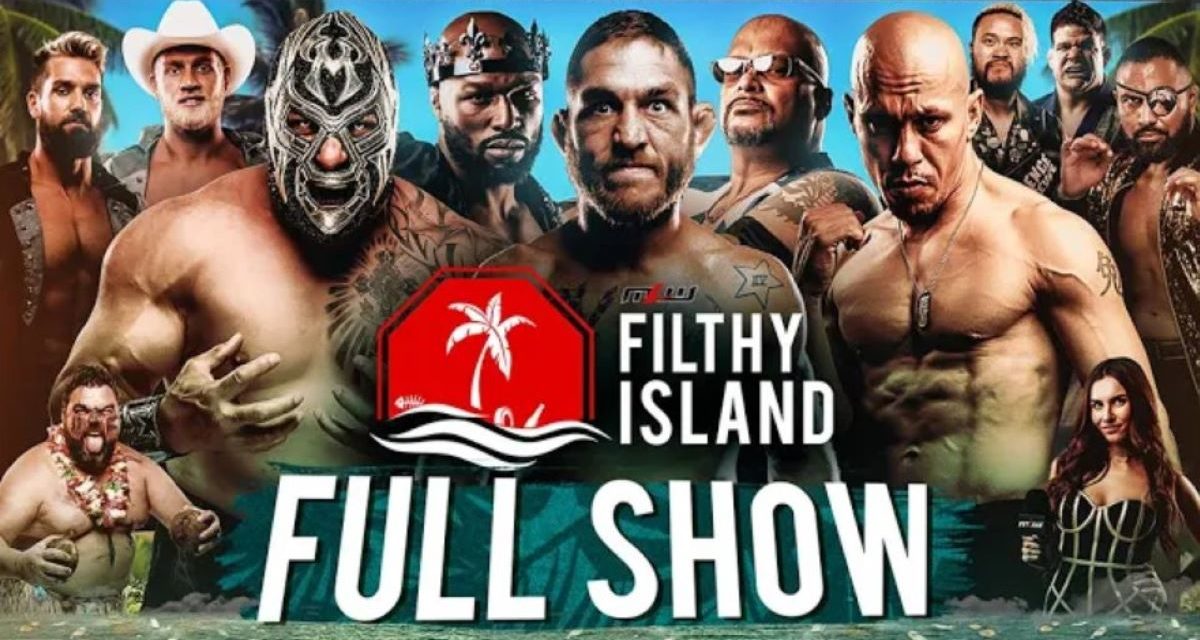 If I have learned anything in life, it’s that being on an island is a treacherous endeavor.  There are many examples to choose from:  The Island of Dr. Moreau, the creepy island from “LOST”, Gilligan’s Island.  Add to the list “Filthy” Tom Lawlor’s “Filthy Island.”

In the words of the great philosopher Han Solo:  I got a bad feeling about this.

Even MLW has a bad feeling, too, when they start the show with the following message:

“DISCLAIMER: Major League Wrestling has no affiliation nor does MLW assume any liability whatsoever in the event Filthy Island is a fraudulent business venture. Wrestlers and fans assume all risk associated with journeying to Filthy Island.

We see Lawlor on a call, frustrated.  Dominic Garrini comes in and asks what’s up.  Lawlor says that catering is holding back the spam (THE HORROR!), and he wants Garrini to talk to Cunningham and take one for the team, if ya know what I mean.  Garrini is slack jawed at the request.

Live from Filthy Island.  You were warned, folks.

Your Commentators “Filthy” Tom Lawlor and Dan Lambert have the call, starting with your…

Just how janky is this “filthy Island?  One half of the Dirty Blondes is the “soundman” playing tapes (yes, kids.  Cassette tapes.  Google it) of the wrestlers’ intro music.  Garrini comes to the “ring”, which has no ropes.  You’ll hear throughout the night that Lawlor spared no expense for this show and, boy, was that low-rent Dana White not joking.  Garrini’s opponent is the much ballyhooed Mauna Loa (who I can only describe as the second coming of Kamala, but, y’know…a white guy).  A judo throw and a rear naked choke, and well…that happened.

Your winner via Submission:  Dominic Garrini

We now go to Los Parks cutting a promo on Contra Unit, saying they’re keeping the belts for El Jefe.  Hmmm, now where have I heard that name before….?

Cut to a teaser for aztecaunderground.com. Opportunities abound for believers.   That leads me to wonder what in the name of the El Rey Network is happening…?

Dynasty members Richard Holliday and Hammerstone show up on the island, questioning why they’re there to begin with.  Oh, well, of the ring they go.

We then throw it, live via satellite to Chichen Itza, Mexico, where we’re told Rich Bocchini and Jared St. Laurent are going to call the Aztec Jungle Warfare between Mil Muertes and Savio Vega.  They’re creeped out, and my Carny Sense is tingling…just like it did for the Baklei Brawl a couple weeks ago.  But before I can really spend my thought process on it, we go you the “ring” for…

Start of the match was unique, because there is a tree shading the ring.  As Kevin Ku “parts the ropes”, up top on a tree branch is Zenshi, and Zenshi leaps down onto Ku from a tree branch.  Pretty cool way to start, and Zenshi gets in early offense.  He goes to the ground with a shooting star press from the ring to the ground floor…errr, grass… but Ku evades.  Ku says enough of this, and grabs Zenshi and gives him a back body drop on edge of the ring apron.  Ku in control, and he hits a beautiful twisting dragon screw leg whip to Zenshi.  Ku focuses on taking out Zenshi’s offense by going for a single leg Crab, but Zenshi is goes for the outside of the ring (since there’s no ropes to break the hold), and Ku transitions to a Boston Crab, and then a clothesline to knock down Zenshi.  Zenshi takes control back, delivering a wonderful Pelé kick to stun Kevin Ku.  Zenshi goes for a cutter, but it’s reversed to a snap dragon suplex, and that ends it for Zenshi.

Your Winner via Pinfall:  Kevin Ku

Promo from the Von Erichs, and I guess they’re live streaming from the mountains of Hawaii, and they’re crashing the Filthy party.  Can’t wait to see that.

Back to the Jungles of Mexico, where Salina de la Renta is with the ref, so I guess it’s time for the… 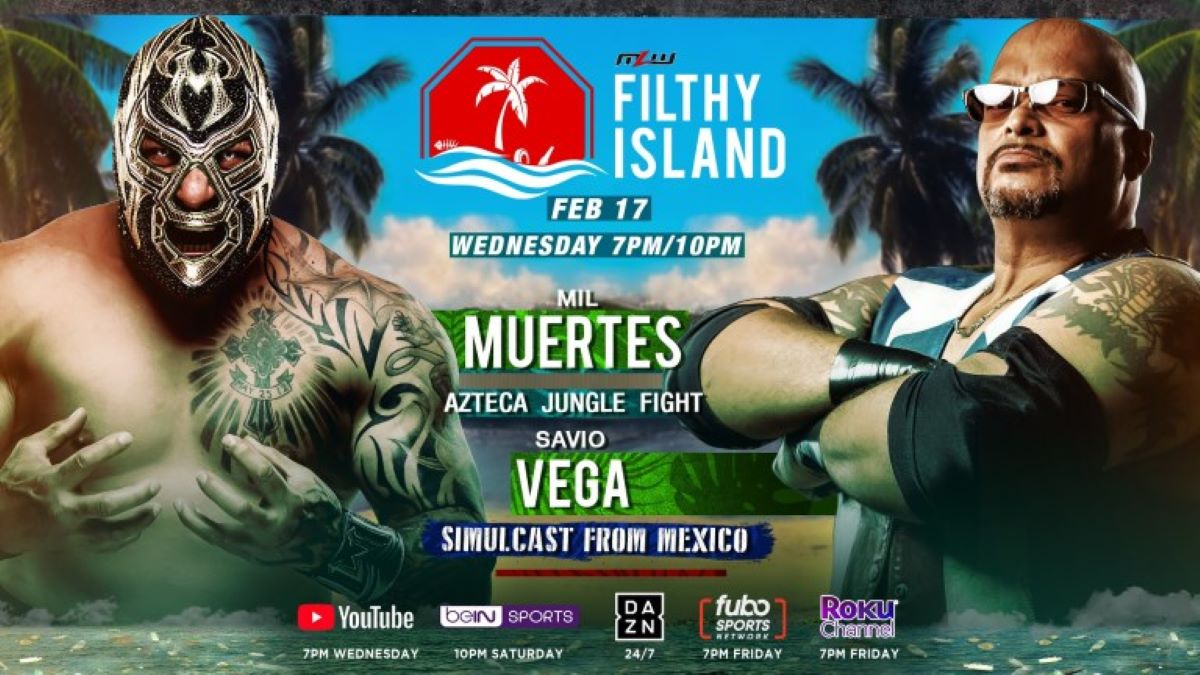 Vega comes into the picture and starts jaw jacking at de la Renta, and Muertes appears, and it’s on.  Our true heroes, the camera men, are filming the action.  Vega and Muertes start fighting, and then the “live feed” cuts out and goes to commercials.  Not even a picture in picture.  Guess we’ll follow this throughout the night.

Alicia Atout is joined by TJP. As always, Atout brings the hard hitting questions on Bu Ku Dao. TJP says he has dominated, and last year wanted to extend beyond the junior/cruiser divisions. He wanted to bring his experience to the next level, and Bu Ku Dao was someone he wants to bring success, but apparently he didn’t want it enough. Atout states he was bullying, but TJP says he doesn’t consider it bullying, but feels Alicia isn’t asking the right questions, and ends the Zoom interview.

Well, time to move back to the island for….

Even Romero can’t believe the janky ring accommodations, either.  I feel ya, bro.  In any case, start has both men evenly matched, but Loco nails the tilt a whirl backbreaker on Rocky, but gets the two count.  Loco stretching out Rocky, and he goes for his high flying offense, but…no ropes.

Loco back to stretching out Romero, but Azúcar fights out, and starts chopping at Loco.  Romero hits a wonderful huracarrana on Loco from the ring to the grass.  Romero has the upper hand, but then Loco knocks Romero into the “VIP Section” into a couch.  Loco goes up to the ring and delivers a somersault flip from the ring to Romero on the “$700 Italian couch in the VIP SECTION “, according to Lambert.  Back in the ring, Loco covers, but only gets a two count.  Backflip splash by Loco misses the mark, and Romero takes advantage, punting the arm, but Loco with a tornado enzugiri, knocking both men down.  Romero gets back in time, and delivers some unique offense in using the ring post for a tornado DDT, and that gets the three count

Your Winner via Pinfall:  Rocky Romero

Back to the Aztec Jungle as we are getting the “live feed” back to the fight, but the feed is cut by Contra Unit. Josef Samael on the screen says children are oblivious, just like Injustice. He goes on to say Oliver shoulda stayed in the kiddie pool, and there will be consequences courtesy of Jacob Fatu. Hail….ehh, you got the gist of it!

Back to Von Erich’s live streaming, on their way to the ring.  Most interesting Instagram story ever.

Alicia updates on upcoming matches, like MLW Underground next week…but, we go back to the Mexican jungle, as the “live feed” stabilizes, or someone got a better Wi-Fi connection. Vega now has a crowbar, but Muertes grabs it away and clocks Vega. Ref counts for three. De la Renta gives Muertes a shovel to start digging a grave.

I can say, with honesty, that it happened.

Dynasty finally arrives, and Lawlor gets into full “Cricket cellphone Salesman” mode, escorting them to the “VIP Section” and providing the finest SPAM, because it’s an island delicacy.  Holliday is repulsed, and Hammerstone is all, “Bro, what’s up?”  Best line by Lawlor:  “At least it’s not a sham like UFC!”  HA!  Comedy.

Now, on to the MLW Top Ten Rankings, sponsored by Pro Wrestling Illustrated, and they are:

Let’s now go to your Main Event of Filthy Island…. 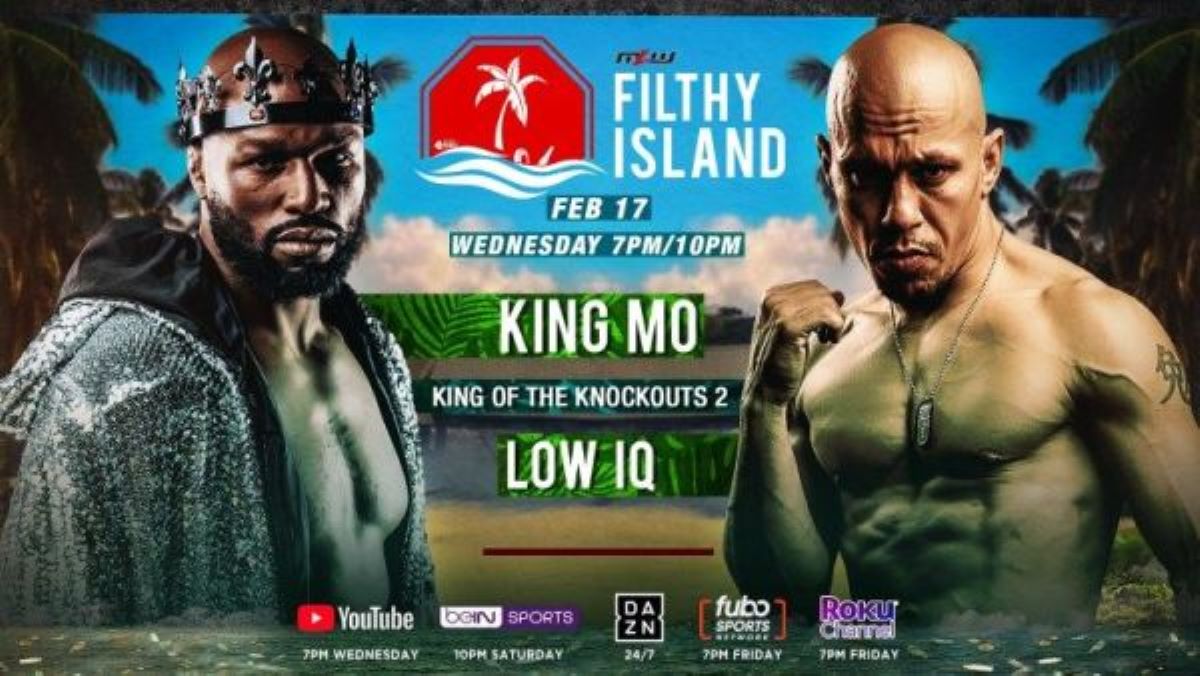 King Of The Knockouts 2: King Mo vs. Low Ki

This is the rubber match from last year, when Low Ki lost in controversial fashion to King Mo.  Ki enters, and just death stares at Lawlor from the commentator booth. Meanwhile Tom just bad mouths Ki all throughout the match.  Bell rings, and both men come out swinging.  Mo slams Ki’s leg to the ring, and focuses his energy on taking out Ki’s major weapons.  Heel hook by Mo, further injuring Ki, but the Lone Wolf of Brooklyn gets up top of King Mo like a rabid spider monkey, and uses his leg as leverage to choke out King Mo.  Mo scrambles to the ropes to break the hold, but…yup, you guessed it:  No ropes because Lawlor, quite literally, spared no expense into the island.  Mo reaches and it looks like he taps, and the ref calls it.

Your Winner via Pinfall:  Low-Ki

After the match, Team Filthy “part the ropes” and proceed to beat down on Low Ki.  The odds are stacked, but the familiar sounds of Ted Nugent fill the ring and the Von Erichs roll up in a Jeep and then the odds are even.  The Von Erichs and Low-Ki take care of Team Filthy, with Ku yelling that this ain’t over.  But thankfully, Filthy Island, is over.

If I had to sum up “Filthy Island”, I would compare it to “LOST”:  Has a confusing start of a plot that finally becomes cohesive near the end, with one too many questions about what the hell is going on (see:  Azteca Underground and the Aztec Jungle Warfare).  That’s not a knock on it, as it did have some elements of humor and intrigue.  Kinda wish there were fans involved, but…well, you know.  Ki/Mo match was a bit short for my taste, but sets up some great opportunities down the road with the Von Erichs and Team Filthy.

Since next week will be “MLW Underground”, which is them replaying classic matches that you can catch on YouTube, I might take a break, or I might not.  Either way, see you at ringside!