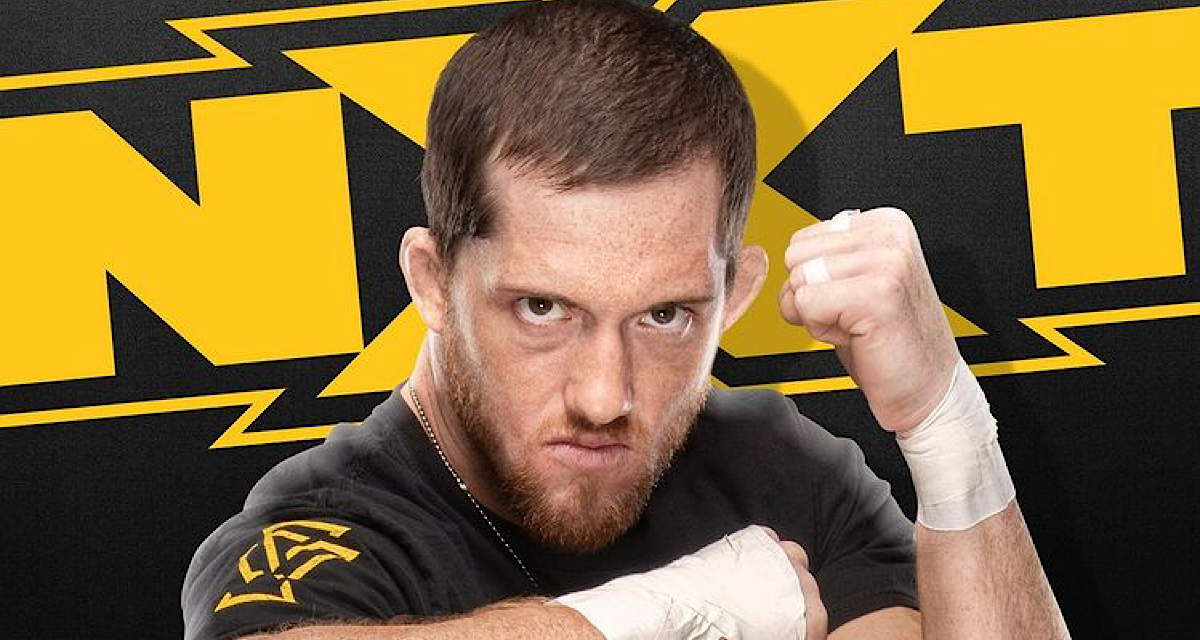 O’Reilly immediately steps into the ring and expresses his disappointment. Cole, despite superkicking him last Sunday, is still considered a brother, and O’Reilly wants an explanation. He’ll instead get stablemate Roderick Strong — who attempts to make peace — and NXT Champion Finn Balor. But before O’Reilly gets his answers, Pete Dunne, Oney Lorcan and Danny Burch attack the men standing ringside. Cole remains unseen with his motives unclear for now.

In other news, Cruiserweight Champion Santos Escobar simply went home. He’ll understandably avoid his matchup with Karrion Kross tonight, but announced by General Manager William Regal, will vacate his championship next week if absent again. So, filling the void is six-man action pitting Dunne, Lorcan and Burch against Strong, O’Reilly, and Balor in tonight’s main event!

The Way vs Shotzi Blackheart and Ember Moon

Austin Theory was kidnapped by Dexter Lumis on Sunday, and Johnny Gargano needs help finding him; Gargano joins commentary and seems somewhat unbothered. Meanwhile, Blackheart and Moon control the opposition before Indi Hartwell reverses with a big boot to regain momentum. The Way gets some uninspiring heat on Moon as an unmarked white van pulls into the parking lot, prompting Gargano to investigate right as commercial hits. The action continues as background noise until Gargano returns with an elated, handcuffed Theory. Capitalizing on a distracted Hartwell, Moon gets the roll-up victory for three, but The Way doesn’t care as they’re ultimately just concerned for their prodigal son. Meaning, this elongated matchup was really pointless.

Another, but vastly more important return sees Pat McAfee inside his private jet! Turns out, McAfee was always right about Adam Cole. And he’ll never let NXT forget it.

After his impressive TakeOver showing against Johnny Gargano on Sunday, the injured challenger Kushida claims they aren’t done. Bronson Reed interrupts and gives his respect, and Malcolm Bivens issues a challenge for tonight. Presumably this leads to Kushida versus Tyler Rust later on.

Ruff shows fire, but confident Scott toys around. Ruff subsequently takes advantage but runs into a great-looking running knee from Scott. The former eventually makes the comeback, hitting a springboard cutter for two, but again Swerve rocks him. Scott attempts a powerbomb-like maneuver, but Ruff counters with his signature crucifix for the surprising pinfall victory. The loser laughs it off, thereafter pummeling Ruff during the post-match and claiming that he gets handed everything. It’s instead because Ruff gets wins!

Kayden Carter and Kacy Catanzaro vs Aliyah and Jessi Kamea

Carter and Catanzaro are still attempting to save friend Xia Li from the mysterious Tian Sha, but tonight they battle against Robert Stone Brand, an even higher entity. Catanzaro does her literal gymnastics as Sha’s pupil Boa appears onstage, but RSB cannot capitalize. Carter delivers an assisted Frog Splash on Aliyah for the pinfall victory, and Li approaches shortly after. Li places the Sha insignia on Catanzaro’s hand, and they’ll supposedly square off next week.

Both Dusty Rhodes Tag Team Classic tournaments concluded last Sunday at TakeOver, and now, Beth Phoenix stands in-ring to present the winners’ trophy. MSK enters first and announces that they’ll face NXT Tag Team Champions Oney Lorcan and Danny Burch in early March. Raquel Gonzalez and Dakota Kai enter second but they’re quickly interrupted by Women’s Tag Team Champions and NXT alumni Shayna Baszler and Nia Jax. As they banter, MSK grabs their popcorn — no, really. Amidst all this, Jax recalls a conversation with Dusty Rhodes who apparently told her, “Baby, you are one big, beautiful, badass bitch.” Points off because there wasn’t an impression, but also, Gonzalez is actually taller and more imposing than her! Before the segment ends, Gonzalez threatens to stick the silver Dusty boot up Jax’s hole. So close to getting through this thing without a ‘my hole’ reference…

Kyle O’Reilly and Roderick Strong are seen arguing outside, thanks to an eavesdropping cameraman. Later, the same TakeOver vignette of Cameron Grimes plays again. Except this time, it’s revealed that Grimes’ Lamborghini has been wrecked! But Grimes has no worries, he’ll simply buy another one.

A slideshow shows Io Shirai’s championship photoshoot getting interrupted by Toni Storm as referees separate them throughout the following images. Surely there was actual footage?

Kushida’s coming off a TakeOver classic, and the momentum continues here in this technical clash. Rust takes control though after snapping him off the turnbuckle before commercial. Afterwards, Kushida makes the comeback, but Rust reverses with the Axe Kick and continuously shows off his hidden-gem abilities. He applies the Sleeper before Kushida counters with the Hoverboard Lock, ultimately leading to a referee stoppage demanded by Bivens ringside. This could’ve and should’ve went much longer, except more time was unreasonably given to preceding matches.

LA Knight’s debut from Vengeance Day replays, and earlier today, cameras approached his own doors; thanks, Marvez. Knight hits the classic “lemme talk to ya” and gives the usual free-agent promo. However, it’s that unmistakable delivery that keeps his every promo top-notch.

Commentator Wade Barrett says that Stark “looks like Shakira but more of a badass.” That’s the call of the night. Stark’s stuff looks stiff and effective, and despite being compact she’s pretty strong — although her enhancement opponent is even smaller. The finisher is a crazy flipping GTS of sorts, putting her opponent away in possibly the most impressive NXT women’s debut in some time.

O’Reilly takes his aggression out on Lorcan and instead tags Balor instead of Strong. Dunne takes control over the latter until O’Reilly makes the comeback against all three opposing members “like a man possessed.” But his momentum is halted during picture-in-picture, and Balor eventually receives the hot tag. The action completely breaks loose now — it’s been fast and furious from the get-go, as Balor dropkicks Dunne into the referee. He scales the ropes, but Adam Cole finally appears and pushes Balor off! He pump-kicks O’Reilly and delivers a brainbuster onto the exposed steel steps ringside. Meanwhile, Balor inadvertently takes out Strong allowing Dunne to capitalize with Bitter End for three.

Balor shortly recuperates, and from behind, Cole delivers a blindside superkick. He holds up the NXT Championship, placing him back where he rightfully belongs.

Really unfortunate considering how great TakeOver was. Only the main event had some purpose, and in general, was the only match that delivered; even the segments tonight didn’t fully connect. The match card itself lacked interest, but fortunately, Adam Cole swooped in late and injected some hype.