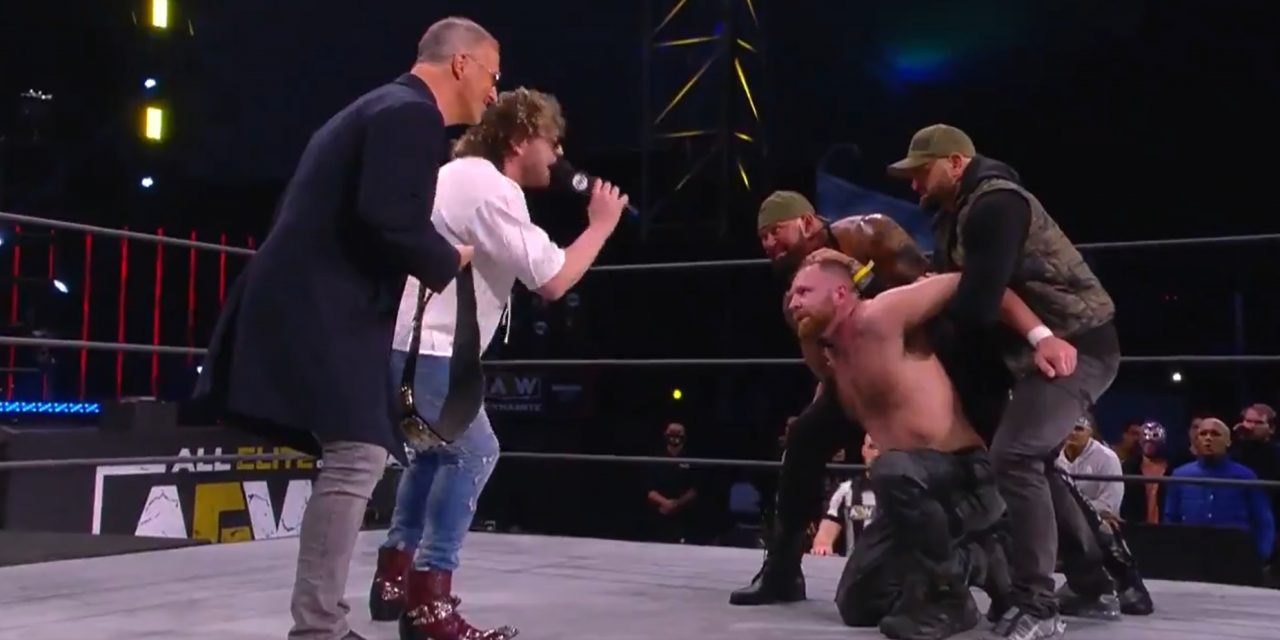 Man, I leave Dynamite alone for a week and the place goes to heck, what with KENTA putting people to sleep, the Inner Circle losing members, and more. Well, the sheriff is back in town, if you expand that definition to mean a writer for a wrestling site with no ability to affect things whatsoever. So let’s see if things have settled some or are even more chaotic than before, as we go live to TNT.

The announcers discuss the fact that Hardy is hardly the first person to try taking advantage of Page for their own ends. Some might say that’s been his overall narrative for the entire time AEW has been in existence, save for maybe his initial push. Despite their talent, TH2 is the designated jobbing duo of AEW, so unless there are some hijinks in store between Page and Hardy, they figure to be dropping this one too. Jack Evans misses badly on a phoenix splash, and TH2 just seems a step off altogether. It matters not in the end, as Hardy hits a Twist of Fate to win it.

Big Money Matt tells the fans to give Page some props, saying he looks like a billion bucks. He tells Page he made the right decision signing with him, but it appears Page may have added some language to the contract, which is conveyed to the ring by the Jacksonville Jaguars mascot. Turns out it isn’t a personal services contract, but a contract for a match at Revolution. Also, if Page wins, he gets all of Hardy’s earnings for the first quarter of 2021. Matt admits he was outsmarted, but asks Page to put his earnings on the line in return. They shake on it, but Hardy wants to get the upper hand immediately, revealing that it’s Isiah Kassidy in the mascot costume. Ever the mercenaries, TH2 is swayed to join in on beating down Hangman, but the Dark Order arrives in force to put a stop to all of this.

Santana and Ortiz tell Alex Marvez that they can’t believe they are only getting their first tag team title shot now, claiming that it’s fear that kept them from the big time. MJF has some angry words for now-former Inner Circle member Sammy Guevara, but Chris Jericho is mad at both MJF and Sammy, who he says “is dead to me.”

Almost forgot that half of the women’s tournament is going on in Japan, but some highlights of the first round matches reminds me this is indeed the case. We’ve got action from the U.S. side on tap next.

It’s been 11 months since Riho has graced an AEW ring, which is quite a long time. Deeb wasn’t even in AEW the last time she was here, so this is a fresh and pretty compelling matchup. No easing in for Riho either, both because Deeb is the real deal and they get plenty of time to work. The winner gets Thunder Rosa, which is also a fun pairing no matter who emerges the winner tonight. Turns out it’s Riho, who got a stiff test in her return.

Shaq makes some unintentionally hilarious faces under a wide range of circumstances, some of which are on display during this Jade Cargill training montage. So … yeah.

This is more or less a squash match, albeit one with some energetic opening moves. Orange wins, as you’d expect.

A video package shows some of the most recent developments in the feud between Darby Allin and Sting and Team Taz. That’s the setup for Team Taz, minus Ricky Starks and Powerhouse Hobbs, to head to the ring to call out Sting. Ask and ye shall receive. The ensuing confrontation goes badly for Sting, who has to take a powerbomb for the first time since his arrival in AEW. My son thinks his expression while looking up at the lights is prime meme fodder, and who am I to argue?

Eddie Kingston claims he requested tonight’s main event as he has three demons to deal with, and conveniently those three demons are his opponents. Funny how that works.

Always concerned about the youth, Kenny Omega reads to some local elementary school kids from the Young Bucks’ book, “Killing the Business.” The kids ask to play with the AEW Champion but are told they can play with Michael Nakazawa instead. He gets kicked in the shin and piled on. Hilarity ensues, or something in that vein.

The rest of the Inner Circle is at ringside, but the referee throws the whole group out, sending them all to the back. Ortiz busts out some submission maneuvers we don’t usually see from him, forcing Matt Jackson to bail out his brother. All the near falls are going the way of Santana and Ortiz, which probably means they aren’t going to win. Classic wrestling logic. What I didn’t expect was for the end to come out of nowhere, with Nick Jackson using a quick rollup to win. As the Inner Circle invades the ring, Omega, Don Callis and the Good Brothers watch backstage. The Good Brothers finally head to the ring in somewhat less than convincing fashion, while the Bucks’ dad gets in the faces of the Inner Circle.

Brandi Rhodes has a special message for everyone, and it’s the gender reveal of the Rhodes baby. As she and Cody step out onto the stage, the screen reveals … it’s a girl! Cody supposedly didn’t even know since Brandi says he has a big mouth. Cody heads to the announce table to do some guest commentary for the next bout.

FTR vs. Matt and Mike Sydal

I confess that I’m not too familiar with Mike Sydal, who is legitimately Matt’s younger brother. He also does a lot of high-flying moves that their foes definitely would not approve on. Mike Sydal also messes up a top rope move, so there must be something in the air tonight. He ends up the victim of what is apparently now known as the Big Rig, so no big win for the brothers. FTR goes to cut Mike’s hair after the bell, but the lights go out and then back on to reveal Jurassic Express standing in the ring. Luchasaurus even has a new mask, and they make short work of FTR.

An unimpressed Moxley has no time for Kingston’s whining, especially since he’s the only guy left who cares about him. Mox plans on taking down KENTA and then taking out Omega and the rest of his crew, one by one. The time is getting close, he says ominously.

There’s no waiting for the bell for these gentlemen, who waste no time tearing into each other. Not that Rey Feinix hasn’t slipped on an aerial move or two during his time in this promotion, but he looks razor sharp tonight. A fun sequence leaves all six men down with only about five minutes left in the show. That sets up a staredown between Moxley and Kingston, who get the chance they both want to go toe to toe. Archer and Fenix join forces to hurl themselves onto Butcher and Blade on the floor, clearing the way for the team captains to finish things among themselves. Mox pins the Mad King with a Paradigm Shift, so Eddie’s demons will live to see another day, it appears.

The Good Brothers show a bit more speed than the first time hustling to the ring to beat on Mox. Omega takes the opportunity to mock Jon while he’s being held helpless. Since he’s in a giving mood, Omega tells Moxley he can have his rematch at Revolution, but he’s going to name the stipulation: an Exploding Barbed Wire Death Deathmatch. That’s a wrinkle I didn’t expect, but now I’m looking forward to it. See you in seven!

If there’s such a thing as a “back to basics” episode of a wrestling show that has not even been around for two years, tonight’s episode would qualify. Several high quality matches more than made up for some storylines that barely took steps forward, and the announcement at the end of the hardcore gimmick match was an eyebrow-raiser. Revolution definitely got raised by a notch.