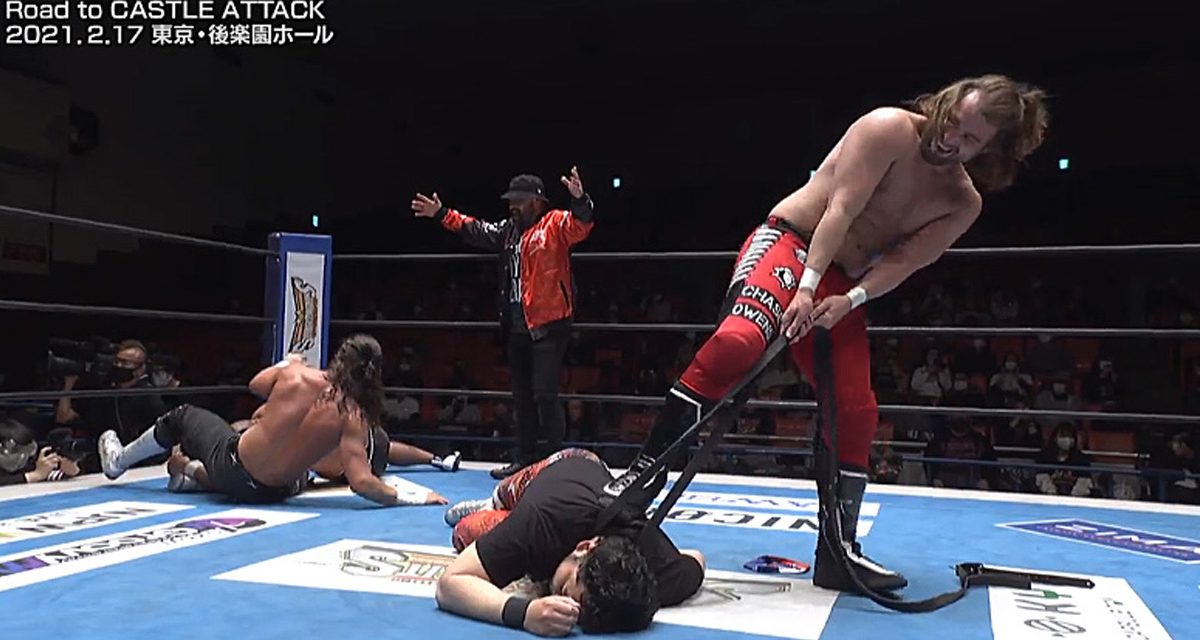 Toru Yano, Yoshi-Hashi, Hirooki Goto and Tomohiro Ishii were all taking naps after their latest meeting with Bullet Club on day four of the Road to Castle Attack.

Chaos were the victims of a brutal assault which saw them all laying on their backs and counting the Korakuen Hall ceiling tiles.

Right out of the gate, Jay White had issues with Ishii who wanted to chase him down on the floor. White demanded Ishii return to his corner or “the show gets cancelled”.

Chaos unleashed some punishment by giving everyone except White a Demolition style beating in the middle of the ring. Ishii even runs outside the ring to corner Gedo and toss him in the ring for his turn at being smashed and crushed.

Chase Owens pulls out the strap once again grinding one of the buckles into Yano’s eye while his Bullet Club pals cut Yoshi-Hashi off from his corner. They lower the boom on him for what seems like hours and have a fun time doing it.

White takes a break from toying with Hashi to complain to the official that Ishii is not holding onto the tag rope as he should be. Hashi does get to safety tagging in Ishii so that he can tear into White. When White has had enough he tags in Owens. Owens still has the strap in his hands.

Yano tags in and removes a turnbuckle. Owens picks it up and gets chewed out by the official. Yano whips Owens across the back with the strap despite warnings from the official. Yano shoves the referee into the Chaos corner. Yano wraps the strap around Owens’ neck and starts choking him. Tonga Loa picks up Jado’s kendo stick nailing Yano and any Chaos member in his line of sight. They all go down. 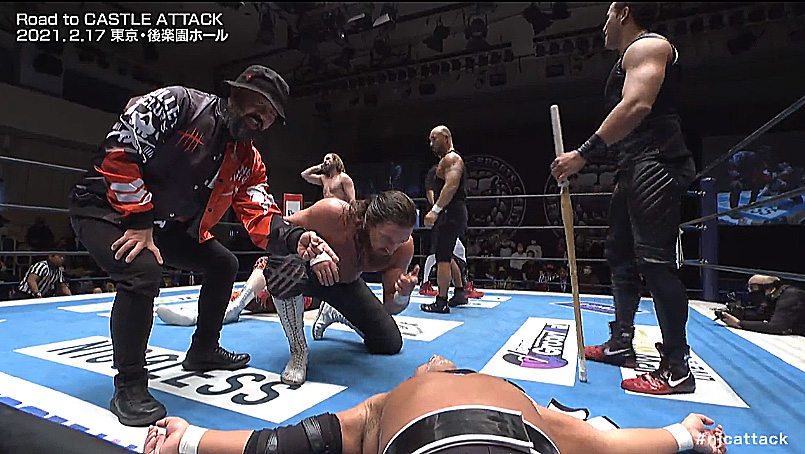 The official gets to his feet and throws the match out. He declares it a no contest. Owens lashes Yano some more then chokes him out with the strap. Loa continues casually caning any fallen Chaos body that moves. He strikes Yoshi-Hashi in the throat with the kendo stick. White squeezes the air out of Ishii’s body with a flag or towel around his neck.

Bullet Club does a group “Too Sweet” over an unconscious Yano.

Reader Alert: Due to a glitch on NJPW World’s end we are unable to review the main event of Chaos (Sho and Kazuchika Okada) versus Bullet Club (Dick Togo and Evil). The match is unavailable at the present time.

Due to Khan’s shenanigans last night Kidd guards Tanahashi as he poses in a corner for the crowd. Khan shoves past him any way and batters The Ace from behind. Ospreay is crotched on the top rope by Tenzan and he needs saving from Khan. Tenzan teases using the Mongolian Chops but thinks better of it knowing he could be fined by NJPW. Khan and Ospreay pummel him with Mongolian Chops and laugh about it. Khan dares Tenzan to chop him as he lays in more of his own. Cobb grabs onto Tanahashi from the apron. Khan comes charging in and bashes Cobb instead knocking him to the arena floor. Tanahashi and Khan get into a battle of the Iron Claws and that stalemate turns into a slugfest. Cobb pins Kidd with a Tour of the Islands.

Shingo pins Takahashi with a Pumping Bomber clothesline. Phantasmo takes the cardboard belt Hiromu gave him yesterday and throws it into the crowd.

In a great match that shows Nagata has still got it, Sanada comes out on top with a moonsault from the top rope.