Owen Hart book serves up a delicious platter of ribs 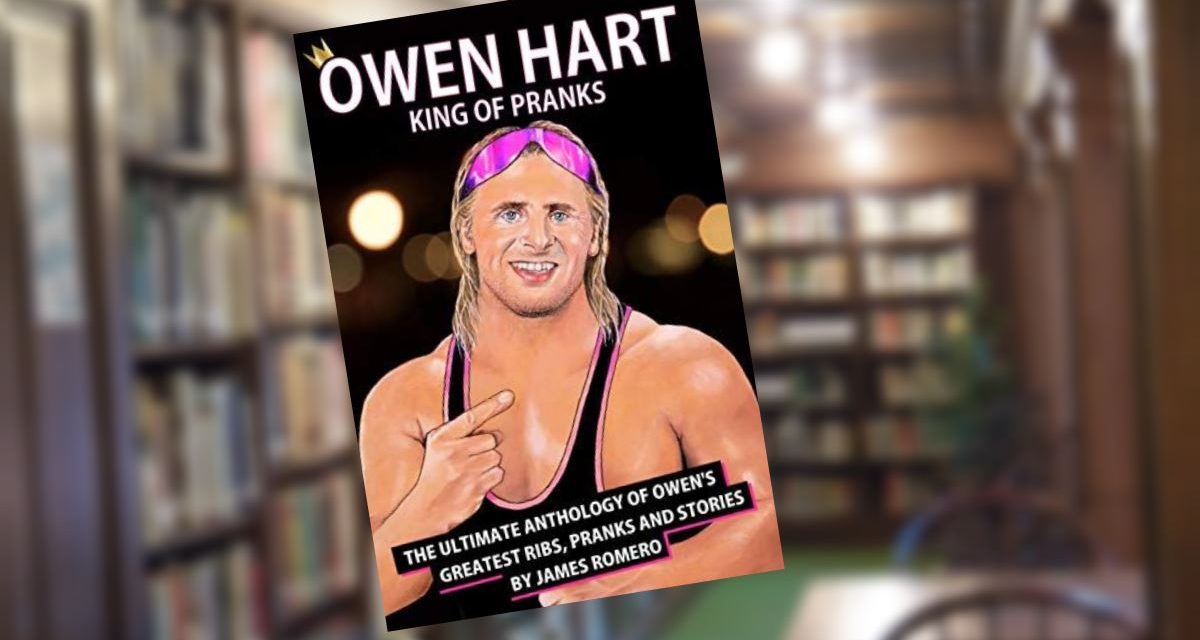 Not many professional wrestlers will ever be able to match the grace, technical ability, agility, and finesse which the late Owen Hart brought to the ring. From legendary battles with his brother Bret Hart — including their historic encounter at WrestleMania X – to his very tragic death at the WWF (now WWE) pay-per-view, Over the Edge, Owen always brought a sense of humanism to the ring which he in turn carried outside of it through humour. Author James Romero captures all of the sides of Owen in his self-published book, Owen Hart: King of Pranks: The Ultimate Anthology of Owen’s Greatest Ribs, Pranks and Stories.

At its opening, the book focuses on Owen’s upbringing and his atypical childhood, with 11 siblings, and his mother and father, Helen and Stu Hart, promoting pro wrestling. All the usual stories are covered: Helen wanting 15 children and Stu, the strong 231 lb. patriarch, wrestling with the menagerie of animals he kept at the Hart house, including a 600 lb. bear who lived under their porch of their mansion in Calgary, Alberta, Canada.

Life was not always easy in the Hart house, and they sometimes struggled for money as stated by Owen during one interview to reporters,“We thought we were rich but sometimes there wasn’t even money for gas.”

The book paints a portrait of Owen’s growth and essence as a person, aided with contributions by his late brother, Smith Hart, who stated that “We’d dress him up like a little punk in a black leather jacket and grease his hair down.” (Editor’s Note: this book is not authorized by all the members of the Hart family). Owen was also a tough kid who would often have scrapes and bruises from scraps on the school-yard. His essence as a person and the character that fans would come to both love and despise began to develop early on. As did Owen’s infamous predilection for pranks and ribs.

A young Owen’s understanding of comedy is described by Romero when he writes: “One morning, [J.R] Foley was sitting in the kitchen of Hart House waiting patiently for his paycheque when Owen walked in with a bowl full of unidentified sweets. The devious Hart chewed away on a piece of carrot to con Foley into thinking he had just tucked into the not-so-tasty confection and brought the bowl over. ‘Don’t mind if I do,’ said Foley, before he shoveled a handful of what turned out to be pebble shaped cat treats called ‘Sea Nips’ into his mouth.” Romero added, “Owen started learning the art of the rib from some of his older brothers, especially Bruce, when Owen started tagging along on (pro wrestling) road trips when he was in his early teens.”

Writing an almost 500-page book was no easy task for Romero. It led him to constantly question whether the book was really worth it and if his writing was good enough to attract and put a spell on readers. In the end, it was the doubts of others, not his own, which drove Romero to finish the project as he truly believed he would be able to do so. Although it took quite some time as Romero “started research in November of 2018 on-and-off until June 2019, then ended up working anywhere between 50 and 80 hours a week between June to (the following) mid-November getting it written, edited, formatted, etc.” In addition, Romero had to complete in depth research. Paranoid thoughts that his writing was “no good” or not worth the time of his readership continued to plague him, however he was a man on a mission.

Romero watched an extensive amount of footage on Owen, read everything that he could about him on the internet and within books and magazines. He also listened to shoot interviews and the recollections of fellow pro wrestlers including the aforementioned Smith Hart and Dan “The Beast” Severn on Owen’s ribs. Smith ended up being a great resource for Romero to draw content from about Owen’s youth while Severn helped him sketch out some of Owen’s later ribs on paper. As Romero recalls, “Dan insisted we have a chat.” The rest was history.

During an interview with SLAM! Wrestling, Romero shared that he reached out to Severn asking for a quote on an Owen rib story that the late Brian Lawler once told on a podcast. “(I wanted to confirm that during their match) Owen stole another luchador’s gear, dove on Severn for a flash pin, shouted ‘TWO POINTS!’ then scarpered out of the locker room!” Another story that Romero really enjoyed learning about was when Owen dressed up in a luchador costume at the Toronto airport and told officials his name was the Soma King. Romero speculates that some of the airport staff knew Owen, as he was in his beloved home country of Canada and quite popular at the time, so he avoided getting into trouble with the authorities.

While the pranks are distinct and often hilarious on their own, it may take a while for readers to get through the entire book. Juxtaposed to all the joking, there is  about “150 pages of biographical content” which Romero feels is important and gives the book extra life. Interspersed with the prose are enchanting, illustrative pieces of hand-drawn artwork by Romero’s sister, Christina Romero, who also does artwork for established musical artists.

What is most fascinating about the book is Romero’s ability to shine a light on how much of a family man and lover of life Owen really was. While he was looking for a way out of professional wrestling, he still made life enjoyable for others. Owen’s tragic death is remembered by many people for the great loss of life that remains forefront in the minds of many fans. I for one, was only in elementary school when I found out about Owen’s death from a classmate, and the tragedy brought me to tears. This book offers a lighter side of both the ring and Owen’s life, with the inevitability that we are all still susceptible to the gravity and trauma of tragedy.

Romero has since started writing another professional wrestling book which he is about 60 pages into writing. However, he refused to give any clues on the subject of the book as he fears that someone may steal his idea. He plans for his next book to be released later this summer.